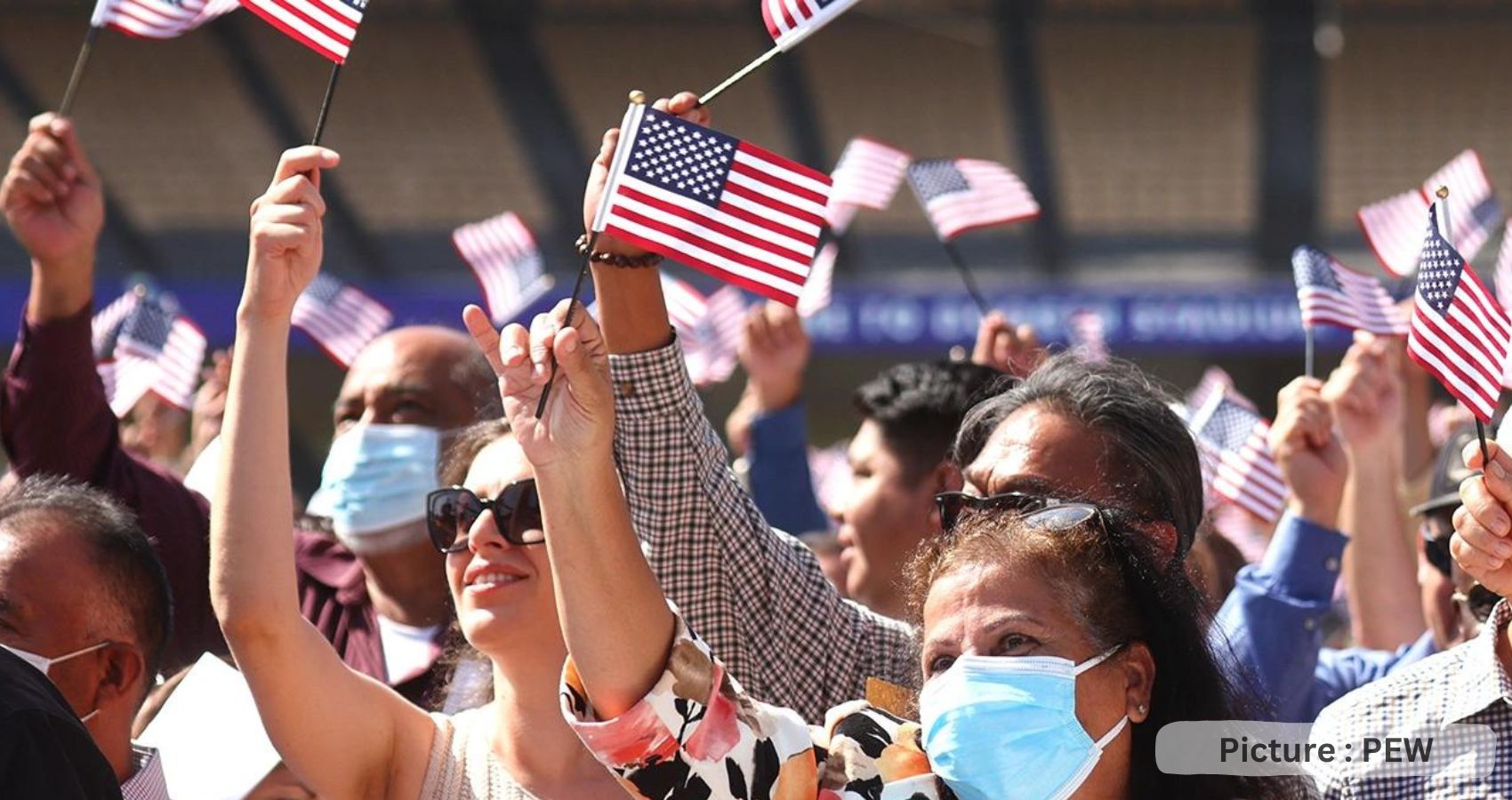 After a sharp drop in naturalizations in the early stages of the coronavirus pandemic, immigrants in the United States are becoming citizens in numbers not seen for more than a decade.

More than 900,000 immigrants became U.S. citizens during the 2022 fiscal year, according to a Pew Research Center estimate based on government data released for the first three quarters of the year. That annual total would be the third-highest on record and the most in any fiscal year since 2008, when more than a million people were naturalized. Federal fiscal years run from Oct. 1 to Sept. 30.

The rebound in naturalizations aligns with upticks in other measures of legal immigration since the spring of 2020, when pandemic-related restrictions, border closures and office shutdowns were widespread. Government data shows a rise since then in the number of immigrants receiving green cards as new lawful permanent residents, as well as a partial rebound in arrivals by foreign students, tourists and other lawful temporary migrants.

Here are five key facts about naturalization trends and U.S. naturalized citizens, based mainly on a Pew Research Center analysis of data from the Department of Homeland Security and the Census Bureau. Immigrants generally are eligible to become U.S. citizens if they are at least 18 years old and a lawful permanent resident who has lived continuously in the U.S. for at least five years, or three years if married to a U.S. citizen. They must meet certain conditions that include a background check and, in most cases, must pass English language and civics tests. Citizenship confers privileges and obligations that include the right to vote, serve on a jury, sponsor other family members and apply for government benefits and jobs.

Quarterly naturalizations are back to where they were before the coronavirus outbreak began in early 2020. The quarterly number of naturalizations plummeted to 81,000 in the April-June 2020 period – during the first months of the U.S. outbreak – compared with an average of about 190,000 per quarter in the previous eight years. After two more below-average quarters, the number of naturalizations reached 200,000 in the January-March 2021 quarter – higher than the total for the same quarter in any of the nine previous years. Naturalization levels for 2021 and 2022 fiscal years have continued to outpace most pre-pandemic years.

There have been an average of about 200,000 applications for U.S. citizenship per quarter over the past decade. Since 2012, the quarterly number of applications for naturalization has generally ranged from about 160,000 to 250,000. Before the pandemic, there were two notable upticks in quarterly applications: one shortly before the 2016 presidential election (April-June 2016) and one shortly after it (January-March 2017).

The number of applications dropped to 154,000 in the April-June 2020 quarter, just after the pandemic began, but rebounded to 330,000 the following quarter (July-September). Going back to 1980, applications peaked in fiscal 1997, reflecting a surge in naturalizations by formerly unauthorized immigrants who gained legal status under legislation passed in 1986 and thus became eligible to naturalize after the usual five-year waiting period. There was another peak in applications in fiscal 2007, ahead of an announced increase in application fees.

More immigrants are seeking U.S. citizenship than are currently being naturalized. As of the end of June 2022, there was a backlog of about 673,000 pending applications for naturalization. The backlog is down from more than a million pending applications in December 2020, but still much higher than in the period between 2012 and 2016.

By August 2020, U.S. Citizenship and Immigration Services had administered the oath of allegiance to nearly every naturalization applicant whose ceremony was postponed when immigration offices were closed, according to an evaluation of government performance during the pandemic. The median time to process a naturalization application, 9.1 months in fiscal 2020, rose to 10.5 months in fiscal 2022.

Mexico, the country with the most annual naturalizations over the past quarter century, is up by only 8% compared with its pre-pandemic average. Most of the other major countries are up at least as much. On a regional basis, sub-Saharan Africa, Asia, Latin America and Middle East-North Africa are up by 15% to 26% compared with their pre-pandemic averages. (Due to data limitations, this analysis compares the 12-month period between April 2021 and March 2022 to the annual average from 2012 to 2019. Read “How we did this” for more information.)

The naturalized citizen population in the U.S. continues to increase rapidly. The total number of naturalized citizens in the U.S. almost tripled between 1995 and 2019, from 7.6 million to 22.1 million, according to the most recent Pew Research Center estimates. In contrast, the number of lawful permanent residents – that is, immigrants who may be eligible to be naturalized but have not done so – changed relatively little during that period, remaining between 11.2 million and 12.4 million.

The share of lawful immigrants who were naturalized grew steadily from 38% in 1995 to 65% in 2019. Lawful immigrants from Europe and Asia (both 73%) are the most likely to have been naturalized, followed by those from Middle East-North Africa (72%), sub-Saharan Africa (66%) and Latin America (56%).

In contrast, the countries with the highest proportion of lawful immigrants who have been naturalized include Cambodia, Guyana, Iran, Laos, Poland, Portugal, Romania and Vietnam. At least 80% of immigrants from these countries have gained U.S. citizenship. (PEW RESEARCH)