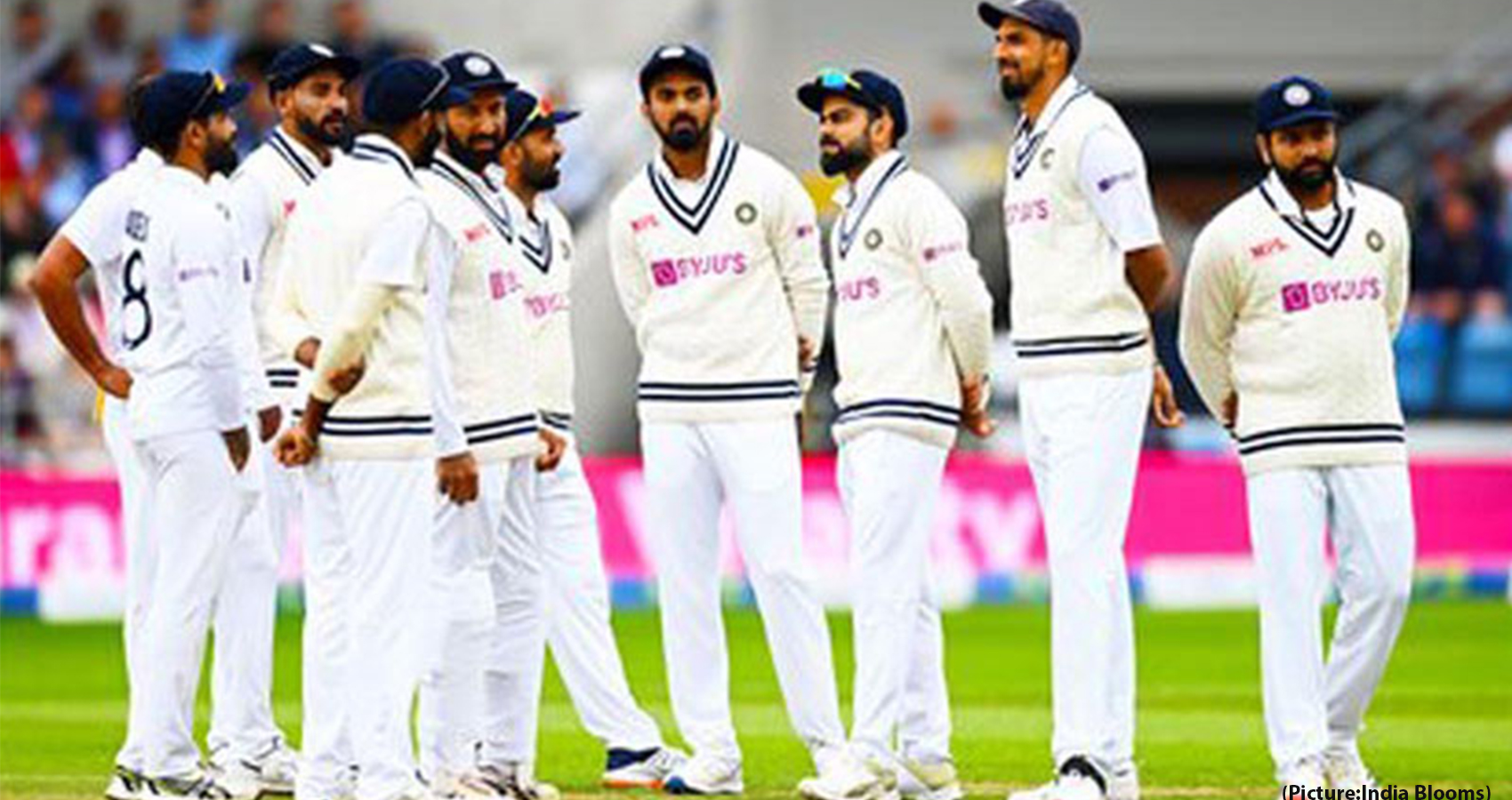 Joe Root held back and allowed Ollie Robinson to lead England off with a souvenir stump in his left hand, cap in the other, to lap up the acclaim of Headingley after a startling victory by an innings and 76 runs. Root had just made history, becoming England’s most successful Test captain with 27 wins, overtaking his boyhood hero Michael Vaughan, but he recognised he should step back for this was a victory set up by his bowlers. Robinson deserved his moment. “Sensational throughout the whole game,” was Root’s snap verdict moments after levelling the series and it was hard to disagree despite his own brilliant century strengthening England’s grip. Root was relieved though. It is six months since he levelled Vaughan’s record and this result stopped a seven match winless streak. 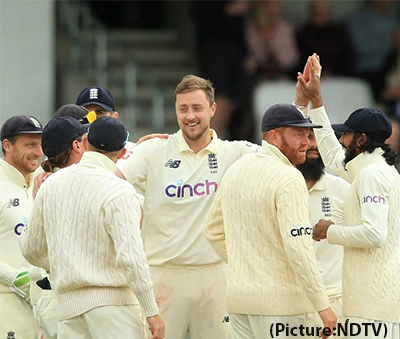 Robinson took five for 65 including four for 25 from an eight-over spell with the second new ball in the morning that destroyed India’s resilience, ensured the match was over 10 minutes before lunch and left Yorkshire having to fork out 50 per cent refunds. The ECB will be happy. This was all over in 112 balls. Surely someone can market that as a new version of Test cricket. How the mood had changed from Monday when the teams were netting at Headingley and Root learned he had lost another bowler – Mark Wood – and admitted he had to remind himself he was living his boyhood dream as England captain while coming to terms with the Lord’s defeat.

“When I was 10 years old I couldn’t think of anything else I wanted to do.” In truth, the break refreshed England, gave them time to regroup and remind themselves India’s batting had looked vulnerable in both Tests. They took advantage of good bowling conditions on day one, dismissing India for 78 and played on Virat Kohli’s hubris when he opted to bat first, ignoring 20 years of results at Headingley. Robinson admitted afterwards he had only learned to bowl the wobble seam delivery that served him well here by speaking to James Anderson in the week leading up to the Test. He is clearly a remarkably quick learner for he has taken to Test cricket like a natural, with 23 wickets at 17 in his four matches to date, with seven for 81 here.

He has endured the ups and downs already after his suspension for racist tweets but proved his maturity by focussing completely on his bowling despite the storm around him. He must have enjoyed his man-of-the-match award at Headingley which he left under a dark cloud as a youngster when Yorkshire despaired at his lack of professionalism. Members of the India squad were in the nets while the post-match presentation was taking place and Kohli was going through his interviews. He knows his middle order is in deep trouble, himself included. Cheteshwar Puajra made 91 but did not add to his overnight total and Kohli nicked off again playing in the channel outside off stump, where he averages 7.25 in this series.

India collapsed from 215 for three at the start of play to 278 all out in 18.3 overs with only Ravindra Jadeja scoring more than six runs on Saturday.   Robinson and Anderson looked as if they were sore on Friday night, both leaving the field for treatment as India rallied. But with the new ball due in their hand, they were refreshed and started with three maidens to crank up the pressure. Robinson, for the second time in the innings, worked his way through an eight-over spell and this time it was hot, the sun beating down for the first time in the match. He struck first from the Kirkstall Lane End, angling the ball into Pujara who shouldered arms and was struck on the pads. It was given not out, but England reviewed and Root leapt in the air, punching his fists towards the packed out Emerald Stand when it was given out, the relief obvious given Pujara’s stickability. Robinson (left) celebrates taking the wicket of Cheteshwar Pujara after review Credit:PA. On 46, Kohli turned and walked when he was given out off the outside edge but partner Ajkinkya Rahane called him back to review. It was wise. Kohli had clipped his pad and was not out.

But it did not matter. Kohli reached fifty, drove Robinson for four but next ball fiddled at a wobble seam delivery which bounced, held its line and took the outside edge with Root pouching a good catch at first slip. Kohli, head bowed, walked off slowly. He had fallen into the trap again. Joe Root wheels away after claiming the catch to dismiss Virat Kohli Credit: GETTY IMAGES

Anderson will need to produce a book as thick as Wisden to record all his records and he added another one when Rahane dangled the bat and edged behind, another India batsmen playing at a ball he should have left. It was Anderson’s 400th Test wicket in England. Only Muttiah Muralitharan had taken 400 wickets in one country before. More importantly to Anderson, it was his first second-innings wicket of the summer and now England could realistically look forward to the afternoon off. Rishabh Pant has no defence to speak of in these situations, the ball seaming and swinging just enough to challenge the edge. He is batting a place too high, especially in England, and it has to be rectified. He charged down to two of his seven balls and it was never going to last. He chased a wide ball and edged Robinson to third slip for one.

Robinson thought he had his fifth wicket when Mohammed Shami was given lbw playing across the line, but it was going over the top of leg stump on review. Root cleverly turned to Moeen Ali, who has a hold over Shami, and bowled him with his second ball, a perfect offbreak that spun between bat and pad. Root gave Robinson one more over, desperately wanting him to take a fifth wicket. Ishant Sharma obliged, propping forward to edge behind for two. There would be no tailend resistance this time,  England homing in on the offstump relentlessly. Robinson deserved his break after nearly 90 minutes of bowling, stepping aside for Craig Overton to wrap up a decent Test return with the final two wickets, striking twice in three balls to remove Jadeja for 30 and last man Mohammed Siraj, both caught off the edge. Surrey, always canny commercial operators, announced straightaway there are tickets available for all five days of the fourth Test. Be quick, grab a seat. This series is brilliantly set up by two

Ten overs into the morning, Cheteshwar Pujara and Virat Kohli have already both been dismissed. The second new ball is swinging and seaming; James Anderson and Ollie Robinson are bowling with immaculate control. Batting in Test cricket in England is seldom so challenging.   To Rishabh Pant there is only one response: charge. And so when he receives his first delivery from Anderson, Pant shuffles down the wicket. To his second ball, he does the same, and steers a single into the on side. From his third ball, against Robinson, Pant again advances, only this time with palpable intent, and attempts to smear him through the on side for a boundary. His bat only connects with air.  It seems the acme of recklessness; you can almost sense the tut-tutting as Pant moves up the pitch. The idea of Pant’s impetuosity obscures the rationale to what Pant is doing: by advancing, he hopes to negate seam movement.

In Test cricket, there exists a curious hierarchy of dismissal. A batsman dismissed defending is sparred opprobrium; one who is removed attacking is vilified, even if he scored more runs. For a top-order batsmen to be dismissed attacking early on in an innings is seen as not merely a cricketing fallibility but a moral one: evidence of a lack of character, a dearth of judgement and sheer arrogance. There is an alternative view. Part of the rich tapestry of Test cricket is that it is a game for all sorts; there is no one set way to approach an innings, as the brilliant, contrasting partnerships shared by Pujara and Pant during India’s victory in Australia last winter attest.  Pant’s propensity to attack is rooted in the simple belief that this is the best way for him to score runs. The rationale is two-fold. Firstly, Pant has an extraordinary array of attacking shots; when he last encountered Anderson with the second new ball, in Ahmedabad in March, Pant reverse-scooped him for four. Secondly, Pant resembles a man who does not trust his defence in English conditions. What can look like bravado is also a mask for insecurity.  Perversely, Pant’s dismissal also provides some vindication for his method. After his first three balls, he returns to a slightly more conventional approach to batting against the moving ball in England. He bats a little outside his crease, but does not advanced further towards the ball as the ball is bowled. And, rather than attempt to swish against the line, instead Pant reverts to defence.

From his fourth ball with this more conventional approach, Pant pokes forward at a delivery pushed across him from Robinson. It is angled across Pant at a line that he could have left alone; instead, his circumspect prod only steers the ball into the slips. All that reverting to orthodoxy has done is get Pant dismissed. There are very legitimate qualms with Pant’s approach in the second innings at Headingley: trying to hoick his third ball, when Anderson and Robinson seemed to be nearing the end of their spells, hardly gave himself the best chance. Pant’s real problem, though, was less of method than the durability of his defence. In seven Tests in England, he has been dismissed defending every 27 balls, compared to 49 balls for all batsmen in the top six in this time.  So when he defends the ball in England, Pant is almost twice as likely to be dismissed as the average top-order batsman. Seen through this light, Pant’s embrace of attacking is not so much a deliberate choice as a reflection of a lack of alternatives.

None of this obscures that Pant is an extraordinary cricketer. Aged 23, he averages 40, and has hit Test centuries in England, Australia and India. In consecutive weeks in Australia in January, India needed over 300 in the final innings; Pant responded with 97 and 89*, two innings of remarkable audacity and self-belief, to help India clinch a draw and a win and seal their heist in Australia. But against the seaming and swinging ball, Pant’s method has been altogether less robust: he now averages just 22.6 in seven Tests in England, and floundered in New Zealand too. For all the temptations to castigate his approach, Pant’s bigger problem is simply his porous defence – and the white heat of a five-match Test series is no time to change a player’s technique. And so perhaps India would be wiser to hope that, with a little fortune, a phenomenal talent can trust in his method and score runs in his own unique way.