Notice: register_sidebar was called incorrectly. No id was set in the arguments array for the "Homepage Sidebar" sidebar. Defaulting to "sidebar-4". Manually set the id to "sidebar-4" to silence this notice and keep existing sidebar content. Please see Debugging in WordPress for more information. (This message was added in version 4.2.0.) in /home/universalmirror/public_html/theunn.com/wp-includes/functions.php on line 5311
 Eight Persons of Indian Origin on TIME’s 100 Most Influential People - Universal News
Skip to content 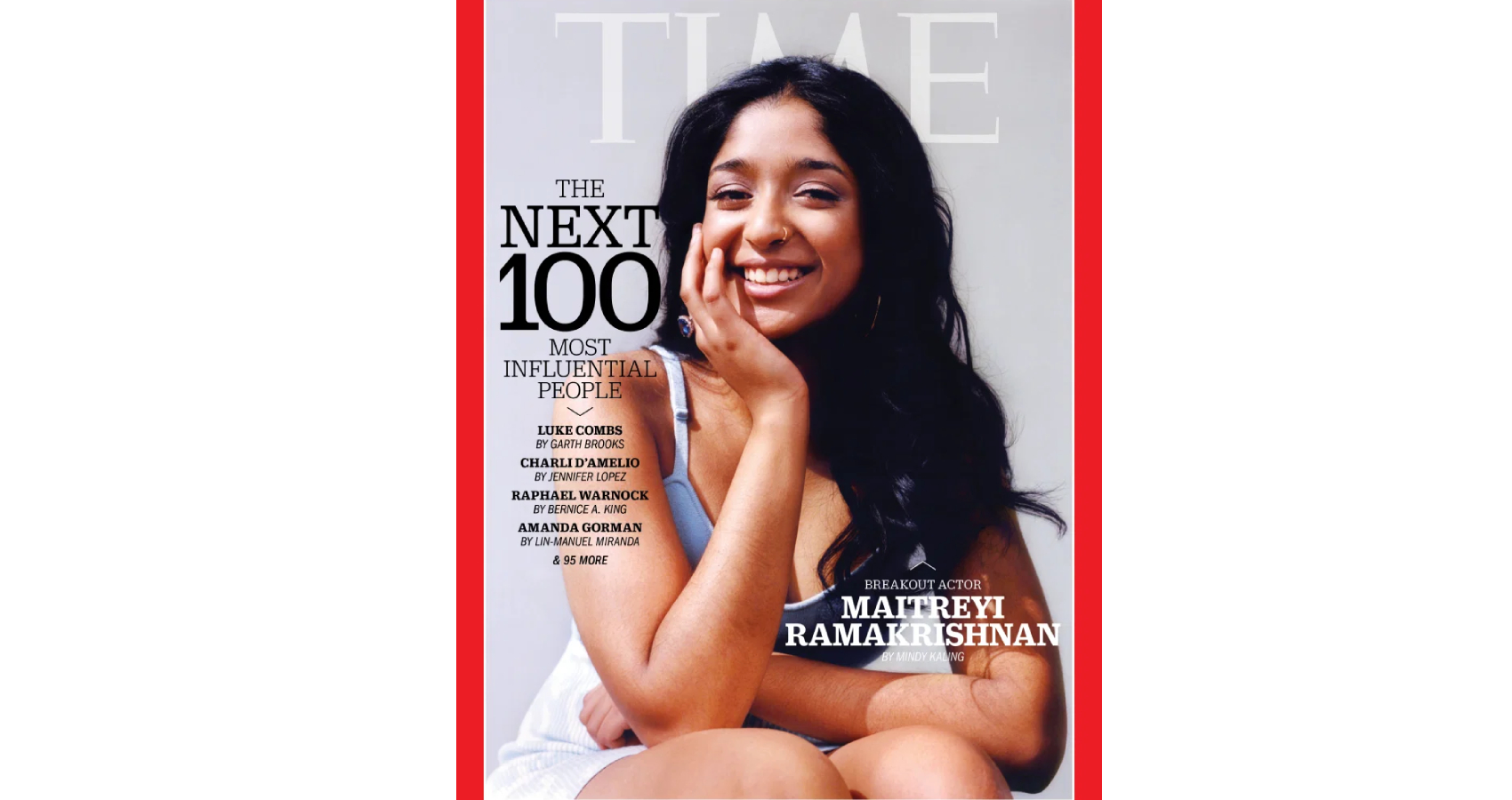 Maitreyi Ramakrishnan, Rishi Sunak, Apoorva Mehta, Vijaya Gadde, Shikha Gupta, Rohan Pavuluri, Chandra Shekhar Aazad, Ranga Dias are among the 100 Most Influential People on the prestigious TIME’s List for the year 2021 and Beyond, who are “emerging leaders who are shaping the future.”

The 2021 TIME100 Next, released on Wednesday, is an expansion of TIME’s flagship TIME100 franchise of the most influential people in the world and highlights 100 emerging leaders who are shaping the future. “Everyone on this list is poised to make history. And in fact, many already have,” Dan Macsai, the editorial director of the TIME100, said.

When you’re a minority woman with your own show, you gotta represent. It’s a tough job to be in that spotlight, where you are scrutinized for your every action, but it’s exhilarating too. People come up to you at the airport or online and say those three magic words: “I feel seen.” It’s a huge responsibility—and Maitreyi Ramakrishnan is exactly the kind of talented young woman who is up to the task.

While she might come off as a carefree teen in her hilarious TikToks and Instagram videos, Maitreyi—who plays the lead role in Never Have I Ever—is a gifted comic actress. She studies her craft and takes it seriously. Moreover, she’s an artist who cares deeply about the material she’s performing, and what it’s saying. She has an activist’s heart and wants to use her platform to help others.

What’s most extraordinary about Maitreyi is that when you’re with her, you think you’re simply talking to a cool, smart teenager, but later, when you see her work onscreen, you realize you were actually interacting with a great artist at the beginning of her journey.

(By Kaling, an actor, writer and producer and the co-creator of Never Have I Ever)

Little more than a year ago, Rishi Sunak was an unknown junior minister in the British government. But after the 40-year-old former hedge-fund partner was appointed to lead Britain’s Treasury in February 2020, he quickly became the benevolent face of the government’s response to the COVID-19 pandemic, approving large handouts for many citizens whose jobs were disrupted by the virus. (The already unemployed and self-employed received less support.) Sunak also oversaw a policy that, when infections were low over the summer, subsidized dining out at restaurants in an attempt to revive the economy. The perceived generosity—and his youthful charm—earned him a legion of fans, but his policy was blamed when cases of COVID-19 began to rise shortly after. Critics also point out that because he has consistently advocated for early relaxation of lockdown rules, Sunak bears perhaps more responsibility than most for Britain’s failures in responding to the virus, which has left more than 115,000 people dead—the fifth highest toll in the world. Nonetheless, Sunak remains the country’s most popular politician, according to the pollster YouGov. And he’s the oddsmakers’ favorite to be Britain’s next Prime Minister. (By Billy Perrigo)

In the early days of the COVID-19 pandemic, Instacart faced a tidal wave of orders, as people with means opted en masse to pay the service’s workers to buy groceries for them. Apoorva Mehta, the company’s 34-year-old founder and CEO, calls that period a “wartime moment”: “We just didn’t have enough shoppers.” Instacart went on a hiring binge in March 2020, bringing on 300,000 gig workers in a matter of weeks; the next month, it announced it would hire a quarter-million more.

But as usage soared, Instacart faced new criticism about the way it treated its workers, including labyrinthine sick-pay policies, frequent rule changes for shoppers and demanding performance metrics. And after pouring more than $20 million into a controversial ballot initiative in California, Instacart—alongside other firms such as Uber and Lyft—decisively won that bid last fall to avoid classifying their workers as employees under state law.

Mehta says, “This is going to be a conversation that we’re going to have as a society over the next decade or so,” about the gig economy: “The ecosystem that we want to build is one that recognizes that flexibility is going to be an important part of people’s work.”In the meantime, Instacart—which raised more than $500 million in venture-capital funding last year—continues to expand. “The smartphone is the supermarket of the future,” Mehta says. “We are going to help co-create that.”  (By Alejandro de la Garza)

Twitter CEO Jack Dorsey was on a private island in the Pacific when he found out President Trump had been suspended from his platform. Conveying the news, on Jan. 6, was Vijaya Gadde, Twitter’s top lawyer and head of policy. In a phone call, first reported by the New York Times, Gadde told Dorsey that the decision had been taken to reduce the risk of further violence after the attack on the Capitol earlier that day. Within two days, Gadde and a team of other employees had persuaded a hesitant Dorsey to ban Trump permanently.

Gadde, 46, is one of Twitter’s most powerful executives. Her boss, Dorsey, has delegated to her Twitter’s content-moderation decisions; she was the architect of the 2019 decision to ban all political advertising, and is responsible for the warning labels that Twitter applied to COVID-19 and election-interference misinformation in 2020. While Twitter is still home to much misinformation and harassment, Gadde’s influence is slowly turning the company into one that sees free speech not as sacrosanct—but as just one human right among many that need to be weighed against one another.

In a crisis, small acts can make a big impact. And in extraordinary times, ordinary people, driven by service, can do extraordinary things. The early days of the COVID-19 pandemic were some of the darkest in America’s history. A leadership vacuum from the White House contributed to health care professionals across the country lacking the personal protective equipment they needed to stay safe and save lives.

Dr. Shikha Gupta wasn’t on the White House Task Force. She wasn’t a governor or a member of Congress. She held no title other than doctor and citizen. But when she and her colleagues saw a need—and a hashtag—they met the moment and took action. Powered by a dedicated coalition of medical professionals and other team members, the Get Us PPE organization—where Gupta is the executive director—has helped distribute more than 6.5 million pieces of PPE to frontline workers.

Their fight, like this pandemic, is not done. But across the country, millions of people working to save lives can do so with confidence because of Gupta and her colleagues’ small acts and incredible impact.

(By Kim, a Democratic Congressman from New Jersey

Chandra Shekhar Aazad, 34, is a Dalit—a member of India’s most oppressed caste group. The movement he leads, the Bhim Army, runs schools to help Dalits escape poverty through education. It also practices a distinct brand of assertiveness, sweeping into villages on loud motorbikes to protect victims of caste-based violence and organizing provocative demonstrations against discrimination.

In September 2020, when police in the state of Uttar Pradesh delayed investigation of the fatal gang-rape of a 19-year-old Dalit woman, allegedly perpetrated by four dominant-caste men, Aazad and the Bhim Army spearheaded a campaign for justice. The protests and public outcry that followed eventually led to the accused rapists’ arrests. (They deny the charges.) Aazad has also lent his support to several other progressive movements, including recently to farmers protesting against corporate agricultural reforms.

He hopes to turn the reach of the Bhim Army—and his own growing popularity—into wins at the ballot box, and in March 2020 launched a political party. Its first real test comes during elections next year in Uttar Pradesh, where Hindu nationalists are politically dominant.

Despite the Bhim Army’s muscular stance, Aazad has also cultivated an aura of charismatic approachability through deft use of social media; even Aazad’s luxuriant mustache—a style seen by some dominant castes as a status symbol—is a form of resistance. By challenging the notion that Dalits should be deferential, says Dhrubo Jyoti, a Dalit journalist at the Hindustan Times, Aazad and the Bhim Army “have visually and psychologically changed the pitch of caste resistance in India.”

As the COVID-19 pandemic continues to put Americans in financial distress, more and more people have lost jobs, incurred expensive medical bills and faced other hardships. Filing for personal bankruptcy can be an effective way to eliminate debt and re-enter the economy, but high legal fees and complex paperwork can make it difficult to seek that relief, especially for low-income families. That’s why, in 2018, 25-year-old Rohan Pavuluri founded Upsolve, a nonprofit that offers a free online tool to help users fill out bankruptcy forms on their own. To date, Upsolve has helped U.S. users relieve more than $300 million in debt. “We’ve found a way to use technology to address a civil rights injustice at scale,” Pavuluri says. (By Mariah Espada)

Let’s be clear: hoverboards, magnetic levitation trains and resistance-free power lines are not coming this year or next. But thanks to Ranga Dias, they’re closer than they ever were. Those technologies (and many more) rely on developing new superconductors: materials through which energy can move with no resistance.

The catch is that supercold temperatures have long been necessary for superconductors to work, making them impractical. So Dias, an assistant professor of mechanical engineering at the University of Rochester, came up with a solution that could pave the way for future innovations: a room-temperature superconductor that’s superdense instead of supercold.

Dias developed a material made of hydrogen, sulfur and carbon, squeezed at a pressure equivalent to 2.5 million atmospheres. The extreme compression eliminates electrical resistance, allowing energy to traverse with ease. Dias is aware of the breakthrough nature of his work. “People have been trying to develop superconductors for a century,” he says. They missed their chance in the 20th. In the 21st, thanks to Dias, they just might succeed. (By Jeffrey Kluger)