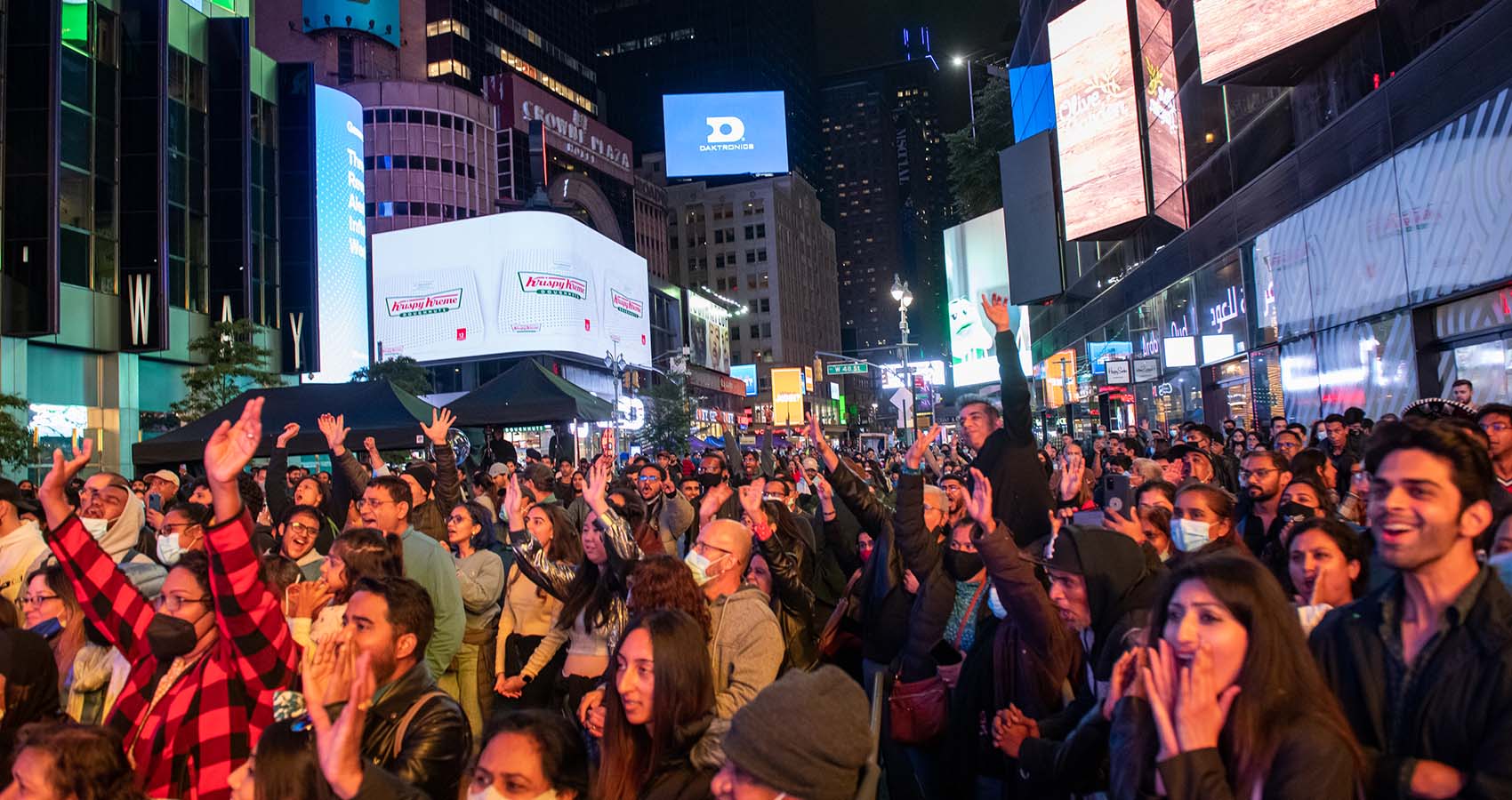 This year Diwali at Times Square was celebrated with a raging come-back after 2 years COVID-19 Lockdown. Thousands of people participated as the brightest celebration unfolded in the brightest city on earth – New York! The event was extremely successful and was attended by some of the highest-ranking Government officials and dignitaries in the business world. This Event was Conceptualized by Event Guru and managed by ASB Communications. 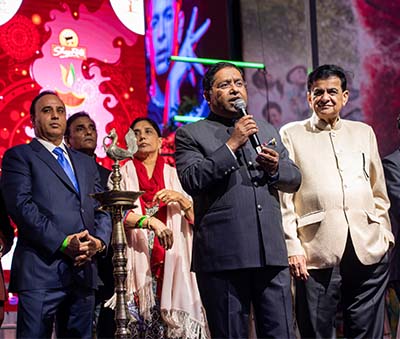 The President of EventGuru Inc. Neeta Bhasin said ‘We are sharing the message of Deepavali – Knowledge over Ignorance, Light over Darkness, Peace, Love, Unity and Togetherness and inclusion in diversity to the World from the biggest crossroads of the world, Times Square. Even the universe responded in appreciation by keeping the weather conducive to the event despite forecasts of rain throughout the day.’

The event was hosted by Aryan Vaid, Mister International Award winner, Vidhi Dave, Mrs. India USA, Esha Kode, Miss Teen India Worldwide. The celebrations began with a traditional Diya (lamp) Lighting ceremony at Times Square. Usually this was done by Mrs. Brijbala Suri, mother of the producer, Neeta Bhasin. But due to her passing, this responsibility was undertaken by her son Gajendra Suri and family. The Diya Lighting Event was followed by dazzling performances by Darshana Menon, the Sa Re Ga Ma 2009 winner, Arya Dance Academy, Sadhanalya Dance Academy and Masala Bhangra.

The Light up Times Square Concert started at 5 PM and was made more luminous by the fact that the Diwali Countdown on Ball Drop Screen created History at Times Square. The sparkle was even greater due to the elite guests who graced the stage with their presence. This whole segment was broadcast live on TV Asia across the USA and worldwide through the Neeta Bhasin Show on YouTube. 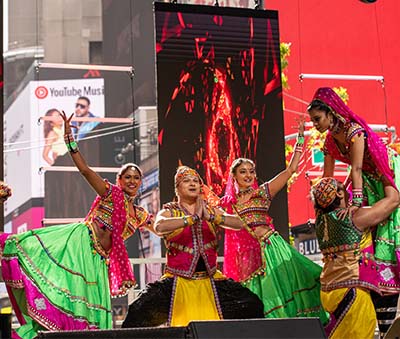 Prime Minister of India, Narendra Modi sent his Diwali message ‘Heartiest greetings and best wishes for the celebration of Diwali, the Festival of Lights organized at Times Square in New York. The celebration will help spread our rich traditions and culture in different parts of the world. Carrying the eternal message of victory of light over darkness and truth over untruth may this auspicious occasion further spread peace, happiness, and prosperity in the lives of every member of the Indian diaspora in the USA.’

Consul General of India, NY, Randhir Jaiswal addressed the attendees by saying that ‘It is a time when we must respect the foundational values of our society, kindness, compassion, sharing and being together and may you bring all these values today and tomorrow and forever. Let the light of Diwali shine in your lives and all those around you.’

Think about the fact that we can conquer the darkness with light and we did that with Pandemic. Congresswoman Rep. Carolyn Maloney said that ‘I have been coming to this festival ever since we got the Diwali stamp approved which I worked on with many of you for many years to make it happen. The Diwali stamp has been so successful that I think we should have a Diwali Holiday. So, I am introducing a bill for that. Let me get back to work so I can make all these wonderful things happen’.

Senator Chuck Schumer ‘I believe in immigration in general. My middle name is actually Ellis, it is Charles ‘Ellis’ Schumer from Ellis Island. Immigrants have great American values while still remembering the traditions and bringing them to America from their home countries. One of the best and the greatest immigrant communities is our Indian American community, our South Asian Community. We must welcome more Indians to come to America and New York. Because there are more Indians in New York, the greater NY will be’. 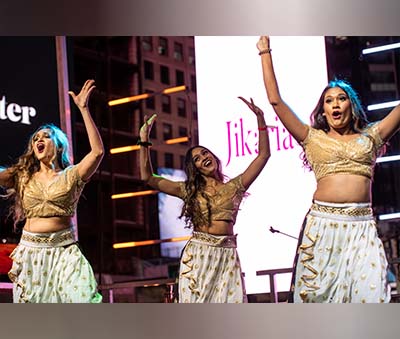 NY State Senator, John Liu was very excited to see the huge crowd at Times Square ‘It is great to see everybody in person. No better place to celebrate Diwali than the crossroads of the world right here in Times Square, NY City. With Neeta’s advocacy and esteem journalism and many others, in NYC a long time ago we were able to make a parking holiday, you do not change the car from one side of the street to another’.

Diwali at Times Square was celebrated in association with Samman for All, it’s mission is to facilitate people from the lower-economic strata to achieve their dreams by providing them with tools for sustainable living and empowerment, said the Director of the organization. ShopRite’s Ranjana Choudhry VP Advertising and Social Media ‘We are very proud and very honored to be the Title Sponsor of this event. Let’s turn this festival of lights into the festival of delights. Let’s eat and celebrate Diwali.’

Thomas Rajan- VP, Global Talent American Airlines ‘ In the coming few days, we will be launching our non-stop service from this great city of NY to Delhi and onwards later this year Seattle to Bangalore. Harry Singh Bolla Chairman of Bolla Corporation- ‘We created history in 2013 by representing the 2nd largest festival outside of India. It makes me proud, today we are sitting in Times Square celebrating our culture, our feelings and telling the world what we are all about’.

Some of the front-line fighters in the covid battle like Officer Manish Sharma – President of Indian Police Society (NYPD), Dr. Samin K. Sharma of Mount Sinai Heart, Dr. Jagmohan Kalra and Dr. Sunjit Jaspal from Northwell Health. were honored on stage. The festival did not end there. Yet another set of superb performances by famous artists like Sparsh Shah, Sway Bhatia, Chosen Crew Entertainment Group, Swarali Dance, Jikaria Sisters (Omi, Rish, & Aash), DJ Ash and finally ended with a blast with an amazing performance by International Artist Jay Sean.

More than 250 mainstream media houses are already talking about Diwali at Times Square and the entire event reached out to millions of viewers across both digital and traditional channels in both writing and video publishing formats. Event Guru WorldWide, the organizer of Diwali at Times Square, is a premier full-service event company specializing in festivals, concerts, trade shows, gala dinners and press conferences. We conceptualize and implement events of all sizes and statues.