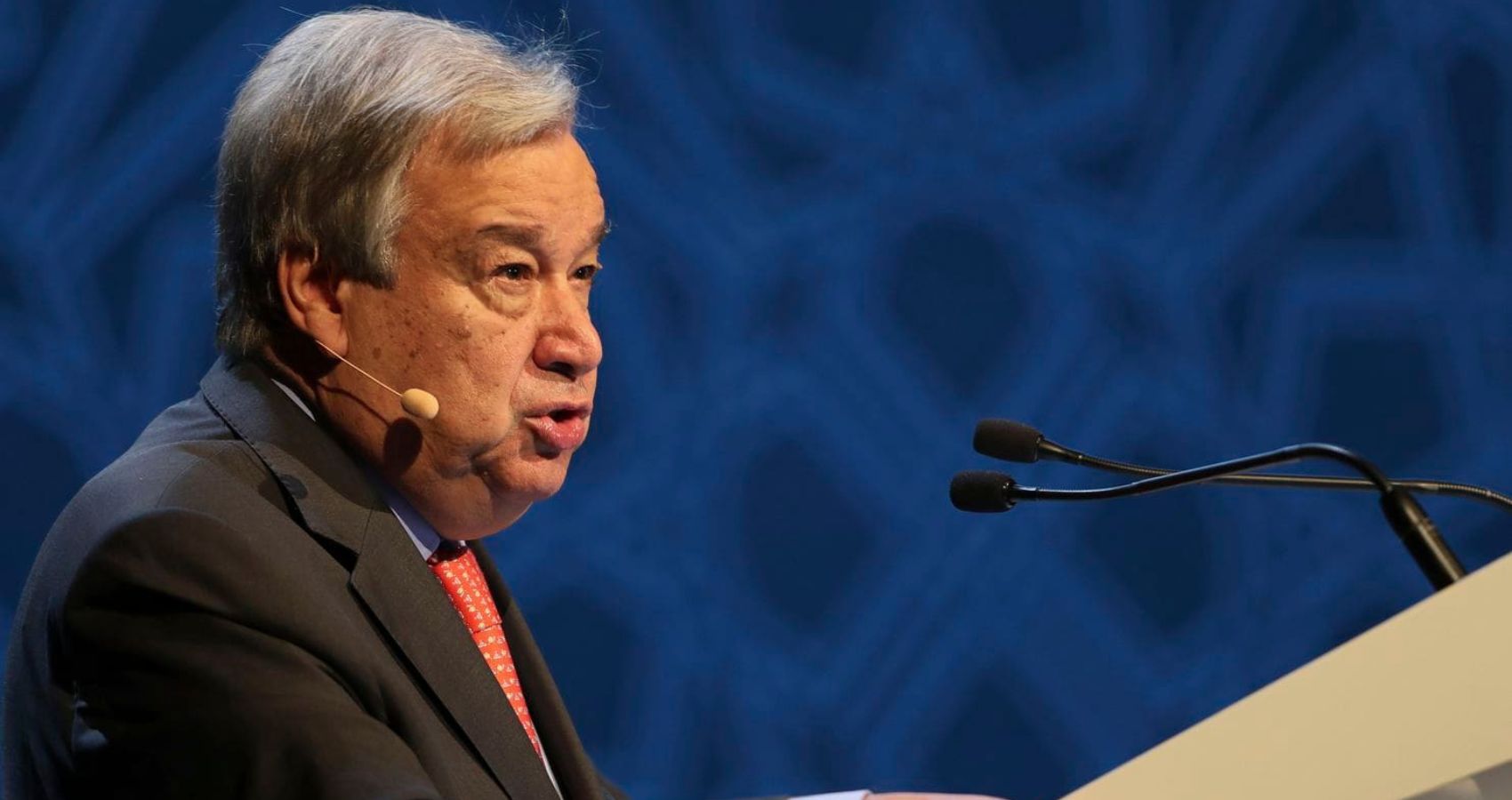 With the United Nations Climate Change Conference of the Parties 27 or COP27 barely a month away, Secretary General António Guterres has stepped up his warnings about the follies of ignoring “a life-or-death struggle” that the world is in the grip of.

“A third of Pakistan flooded. Europe’s hottest summer in 500 years. The Philippines hammered. The whole of Cuba in black-out. And here, in the United States, Hurricane Ian has delivered a brutal reminder that no country and no economy is immune from the climate crisis,” Guterres told journalists painting an increasingly dire picture of the climate catastrophe.

His observations come in the run-up to the COP27, which begins on November 6 and ends November 18 at Sharm el-Sheikh in Egypt.

“The actions of the wealthiest developed and emerging economies simply don’t add up,” Guterres said, pointing out that current pledges and policies are “shutting the door” on limiting global temperature to 2°C, let alone meet the 1.5°C goal.

His comments acquire particular significance since they come just before the pre COP27 planning meetings being organized in Kinshasa, in the Congo. Guterres said, “we are in a life-or-death struggle for our own safety today and our survival tomorrow,” even while counseling that there is no time for pointing fingers or “twiddling thumbs” but instead requires “a quantum level compromise between developed and emerging economies”.

Perhaps part of that compromise is the $100 billion in pledges that Guterres expects from the developed world to fulfil in order to support climate action in developing countries.

He called the COP27 is “the number one litmus test” of how seriously governments take the growing climate toll on the most vulnerable countries.

“This week’s pre-COP can determine how this crucial issue will be handled in Sharm el-Shaikh,” he said as he called for clarity from developed countries on the delivery of their $100 billion pledge.

In Kinshasa, UN Deputy Secretary-General Amina Mohammed warned environment ministers and others that the window of opportunity to avert the worst impacts of the climate crisis is closing.

“Mohammed recalled that at last year’s COP26 conference in Glasgow, developed nations had promised to double adaptation support to $40 billion dollars a year by 2025,” according to an official UN statement.

“The UN deputy chief called for a clear roadmap on how the funding will be delivered, starting this year. She added that $40 billion is “only a fraction of the $300 billion that will be needed annually by developing countries for adaptation by 2030,” the statement said.

In the run up to the COP27, the most disturbing realization is that the goal keeping Earth’s average temperature from rising more than 1.5 degrees Celsius above its preindustrial level is all but dead. As pointed out by Guterres repeatedly, the wealthiest economies are “shutting the door” on limiting the temperature to 2°C, let alone meet the 1.5°C goal.

That makes the work of the COP27 so much harder even as the world daily experiences extreme consequences of climate change caused by a warming planet.

As pointed out by Guterres, global emissions have continued to rise since 2018 when the Intergovernmental Panel on Climate Change (IPCC), the United Nations–led panel of scientists and scholars, said the goal of 1.5°C had become impossible. While it is often said the goal is “technically” possible to achieve but it invariably runs into global development compulsions and challenges, particularly in the developing world.

Since the 2018 IPCC report all the dire scenarios of extreme droughts, famines, hurricanes and other related catastrophes have become a reality around the world. Guterres has used his powerful platform to unrelentingly talk about the climate crisis as the defining challenge for humanity.

The best that is hoped for by many experts is that even as the world will overshoot the goal through the century there are expectations that by 2050 the world will control the temperature by removing vast amounts of carbon dioxide in the atmosphere.