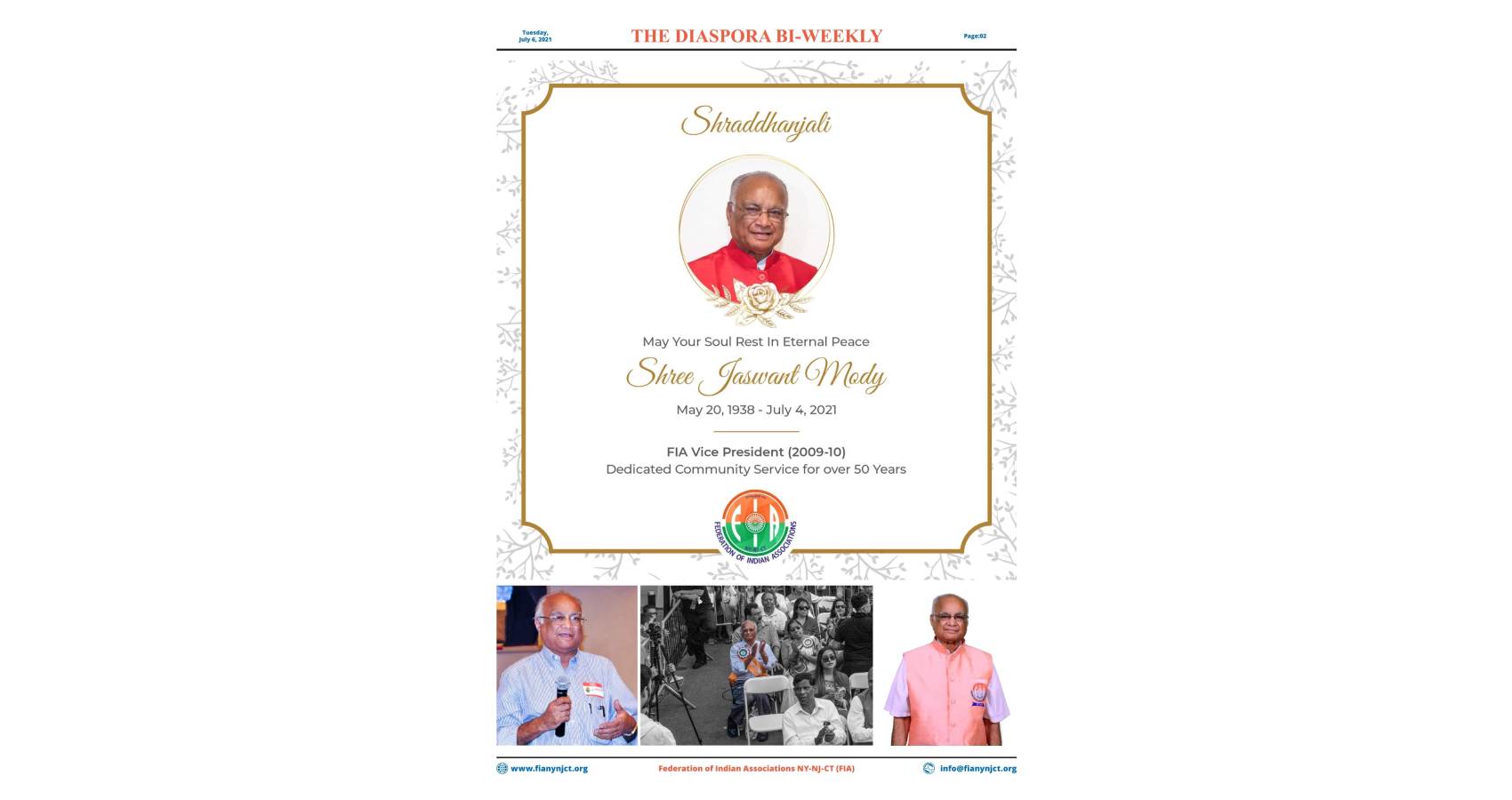 JaswantMody, 83, an Indian American community leader and former vice president of the Federation of Indian Associations died when his car collided with a freight train on July Fourth in Piscataway, New Jersey on July 4th.

“With a heavy heart, we wanted to share with you the news of our dear husband and father, JaswantMody’s death on July 4th. He died in a tragic car accident and was the only one affected,” the family said in an email from son Neil Mody, to community members. “Thanks to all for being a part of his life, he is deeply missed already,” said the note. Jaswant ‘Jay’ BhailalMody, an Environmental engineer, a Piscataway civic leader, long active with Indian cultural organizations, passed away suddenly on the Fourth of July, 2021 in his hometown of Piscataway, NJ at the age of 83. 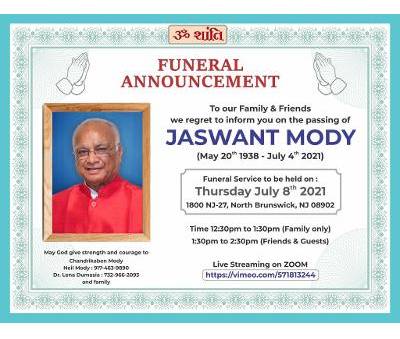 Jaswant was born in Mumbai, India on May 20, 1938. After attending the University of Bombay, he followed his dream to come to the United States of America for freedom and opportunity. Jaswant worked and saved for the fare, and after 1 months of traveling by passenger ship, he arrived in New York. He then began his American Dream. Jaswant attended universities in Utah, Ohio, and New Jersey. Jaswant married and settled down in New Jersey and worked as an engineer for over 5 decades. He retired in 2012 from the DEP of NYC after working there for over 25 years.

Jaswant lived his life as a public servant. He volunteered his time to the Indian community through various organizations and was awarded a Lifetime Service Award by the Association of Indians in America. Jaswant was also very active in the Piscataway community, where he’s lived for the past 47 years. He was a Committeeman for over 20 years, with the Piscataway Democratic Organization. He served on the Piscataway Township Zoning Board. He helped organize the first India Day Parade in Piscataway. Jaswant is survived by his wife Chandrika, son Neil, daughter Lena, daughter-in-law Sheetal, son-in-law Rupal, 4 grandchildren, 2 sisters, 3 brothers, and several nephews and nieces.

A funeral service is scheduled for Thursday, July 8, 2021 from 1:30 pm – 2:30 pm at Franklin Memorial Park in North Brunswick, NJ. View a livestream at https://vimeo.com/571813244. In lieu of flowers or any donations in his name, we ask you to spend time volunteering to help the community just like he did for most of his life. You may sign the online condolence “guestbook” at www.crabiel.comCrabiel Home for Funerals 170 N. Main St.-at Riva Avenue Milltown, NJ 08850 (732) 828-1331 The entire Indian American community is shocked at this sudden death. Dr. Thomas Abraham, Chairman of GOPIUO International stated; “It is a great loss for the whole Indian Diaspora community. He was the most sincere volunteer I have ever worked with. He is currently Associate Secretary of GOPIO International and was at our Zoom meeting of GOPIO on Friday late in the night.

“Jaswant Bhai was such a great volunteer, at the First Global Convention in 1989, he was at the welcome/registration desk for 7 days. When we had a convention in Delhi at the Ashok Hotel In 2009, he just came and stayed at the hotel for 3 days at his own expense, just to take care of the registration. That was his commitment for GOPIO. We will miss a lot in our activities. “I spoke to his son today. They are still waiting for the police report and release of the body. We will plan a memorial service for him after the funeral service is done. They are still working on the Funeral Home and other cremation details. May his soul Rest In Peace.”