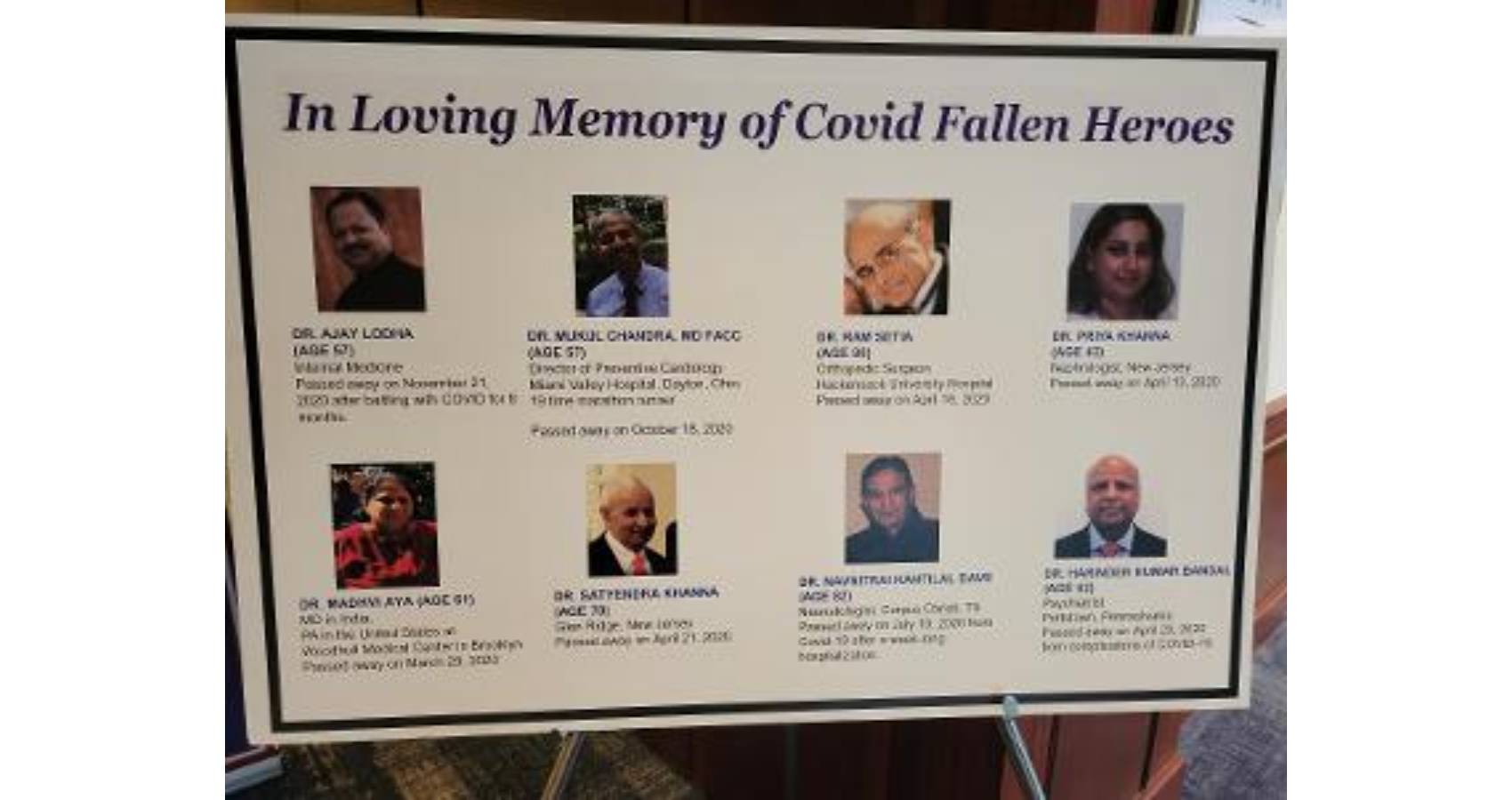 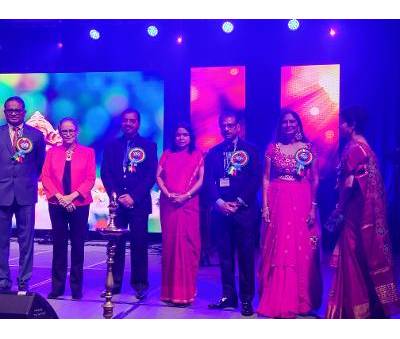 After nearly two years of isolation, virtual meetings, covid fears, the first ever in person event, the 39th annual Convention by American Association of Physicians of Indian Origin (AAPI) inaugurated  at the fabulous and world famous Omni Atlanta at CNN Center and Georgia World Congress Center on July 2nd.
“Remembering and memorializing the brave AAPI Warriors and thousands of healthcare workers, who have sacrificed their lives at the service of humanity, especially during the Deadly Covid Pandemic is the major theme during the Convention,” said Dr. Sudhakar Jonnalagadda, President of AAPI.
“This convention is a tribute to those who have lost their lives and to the frontline medical professionals who are at the forefront, combating the pandemic around the globe,” he added.Describing the theme and importance of the Convention as the world struggles to return to normalcy with the pandemic our lives for the past year and a half, Dr. Sreeni Gangasani, Chairman, Co-founder, eGlobalDoctors and Chair, AAPI Convention 2021 said, “We invite physicians of Indian origin to join the AAPI community as we celebrate the victory of science over calamity while paying tribute to all the fallen healthcare workers including some from AAPI family. We also want to show the world that we can start socializing with precautions once you are vaccinated.” 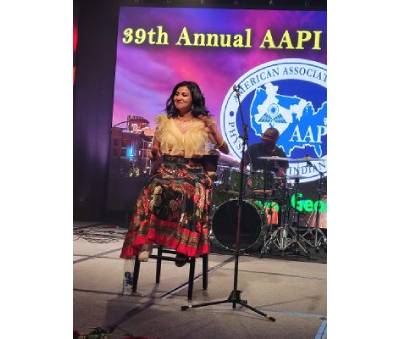 Dr. Smitha Lodha, widow of Dr. Ajay Lodha addressed the AAPI members, thanking them for their support as the late President of AAPI suffered Covid related complications and succumbed to the deadly virus. She praised AAPI and the medical fraternity for their courage and selfless service to bring health and well being to millions across the US and around the world.
The annual convention this year is being organized by AAPI’s Atlanta Chapter, chaired by Dr. Sreeni Gangasani. The inaugural Nite’s Gala was hosted by Georgia Association of Physicians of Indian Origin (GAPI), during which several leaders of GAPI, including Drs. Raghu Lolabhattu, Manoj Shah, Yogesh Joshi, Arvind Gupta, PB Rao, Dilip Patel, Uma Jonnagalada and  Tarun Gosh addressed the audience and shared about GAPI’s educational, philanthropic, humanitarian, political, entertaining and social activities. Educational scholarships were presented to deserving students from the region.
Although only a limited number of participants are attending the convention this year due to the ongoing Coivd pandemic and taking into account the safety of those attending, there was new energy and enthusiasm among the AAPI delegates with an obvious relief among the members cherishing every moment of the coming together and networking and renewing friendship. 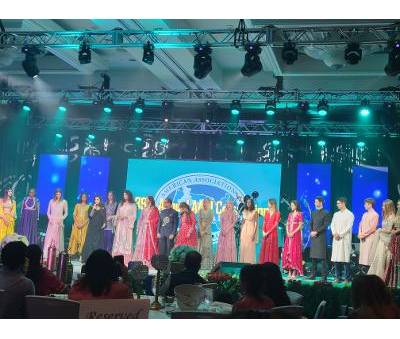 After inaugurating the Convention with traditional prayers and blessings by Hindu Priests, Congressman Buddy Carter, representing the 1st District in Georgia, said, “If there is anything that the COVID-19 pandemic laid bare it is that our country is too dependent on foreign sources of critical pharmaceutical and medical supplies.  I reintroduced bipartisan, bicameral legislation to retake control of America’s health care supply chain. For America’s national security, the legislation incentivizes the domestic manufacturing of drugs and other medical supplies to make the U.S. supply chain less dependent on foreign countries like China.” The only pharmacist in the US Congress, Rep. Carter referred to how the middlemen hike up the prize of drugs by upto 47% in the US, and urged the AAPI fraternity to advocate for more patient-centered care.
Ambassador Taranjit Singh Sandhu  called Indian American Physicians as the “real heroes” Ambassador Sandhu said “You are the real heroes who have risked your lives and have been out to assist others. “What is unique about AAPI is that you bring a global perspective to defeat the virus and serve the people. We are proud of the achievements of the 4 million Indians in the United States.”
In her inaugural address, Dr. Swati Vijay Kulkarni, Consul General of India in Atlanta, who is a career diplomat who holds is a Physician by profession, described the Indian American Physician community as a “Testament to the greatest growth story” of IndianAmericans. Dr. Kulakarni while emphasizing the role of physicians during the pandemic, she praised their contributions and achievements. 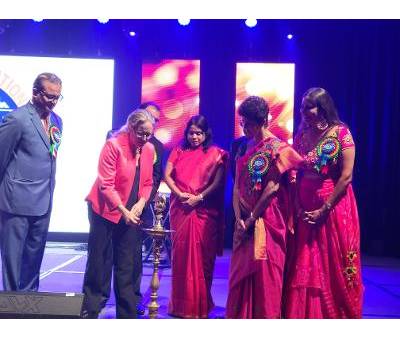 Dr. Kulkarni spoke about the many programs and plans offered by the Government of India to alleviate the sufferings of the people of India during the pandemic. Dr. Kulkarni stressed the importance of Indo-US Strategic Alliance, especially in the health sector, while pointing out India’s contributions providing the world with quality drugs for cheaper prizes.
Congresswoman Carolyn Bourdeaux representing the 7th Congressional district of Georgia was introduced to the audience by Dr. Sreeni Gangasani. Sharing her own close association with the South Asian community, Rep. Carolyn Bourdeaux said, her district is home to the largest South Asian population in the South East. “I have so many wonderful friends in this community for many years I have had many friends who are from South Asia,” she said. “I have been in Washington for about 6 months and I have worked very hard to advocate on behalf of the South Asian Community.” 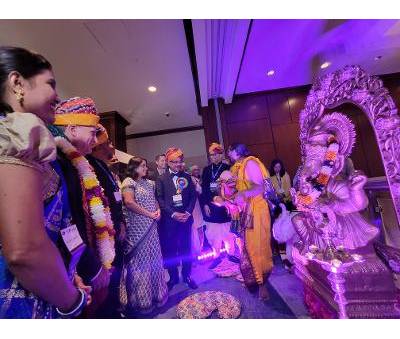 Describing herself as a friend of India and Indian Americans, the Congresswoman said, she is an active member of the India Caucus in the House, she said, “India is a very very important strategic partner to the United States,” and promised to work with the federal government in helping India especially during the pandemic.
The delegates at the convention have Eight Hours of CMEs, coordinated by AAPI CME Chair, Dr. Krishan Kumar, Dr. Vemuri Murthy, Advisor & CME Program Director, and Dr. Sudha Tata, Convention CME Chair, focusing on themes such as how to take care of self and find satisfaction and happiness in the challenging situations they are in, while serving hundreds of patients everyday of their dedicated and noble profession.
Dr. Raghu Lolabhattu, Convention Vice Chair shared with the delegates about how in a mater of less than three months the Atlanta Chapter has put together a fabulous convention. He later on called on stage every member of the convention committee, while Dr. Lonnalagadda and Dr. Gangasani recognized them with a plaque. The past Presidents of were called on state on the 2nd night’s gala and were recognized for their leadership and continued guidance.
During a special appearance at the Gala on July 2nd, the popular Bollywood actor, Pooja Batra, stated, she flew in from India precisely to be with the physicians, acknowledging their commitment and dedication to serve humanity, especially during the pandemic. 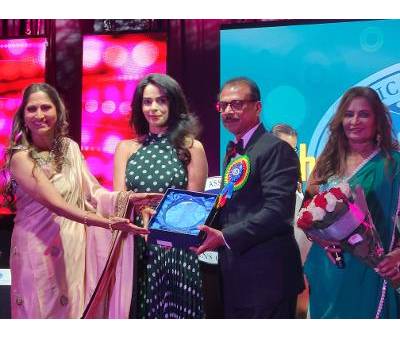 The Women’s Forum led by Drs. Anjana Samadhar, Uma Jonnalagadda, and Udaya Shivangi featured  eminent women leaders, including Keisha Lance Bottoms, Mayor of Atlanta, Dr. Swati Kulkarni, India’s Consular General in Atlanta, Prof. Amita Sehgal, Professor of Neuroscience at UPENN, Dr. Nahid Bhadella, Director of Center for Emerging Infectious Diseases Policy & Reasearch; and, Dr. Mona Khanna, Emmy Award Winning Journalist.
Internationally famed actor from India, Mallika Sherawat, who delivered the keynote address, shared her inspiring and daring personal life story with the audience.
“My new life actually started from running away from home,” at the age of 17 from Haryana to Mumbai, Sherawat said.  Cherishing her economic independence at a very young age after she had “a new advertisement with Amitabh Bachchan with Shahrukh Khan, whom I have grown up watching. This is like a dream come true to me for me,” she said. 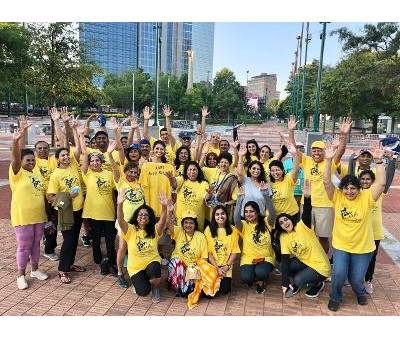 Her advice for younger generation if they want to follow her, Sherawat said, “If you want to be an actress, I would say, start with your dance training and  relaxing training.”
The popular actor said, more than her stardom, she cherishes her work rehabilitating young girls and giving them hope in life.
An exciting Bollywood Hungama Dhum Dhama Dhum featured popular stars Kosha Pandya, Rex D’Souza and Shilpi Paul. Talented artists Vidya Vox and Ravi Drums led the cultural programs. Traditional Dandiya Raas by AAPI’s own Garba King, Dr. Dhiren Buch with live music by Aradhana Music Group of Los Angeles was huge hit among AAPI delegates.
World renowned fashion designer Ghazala Khan-choreographed Fashion Show by beautiful and talented local artists was a treat to the hearts and souls of all the participants.
The inaugural nite’s star attraction was the young and energetic artist Vidya Vox who entertained the audience with song, music and dances. 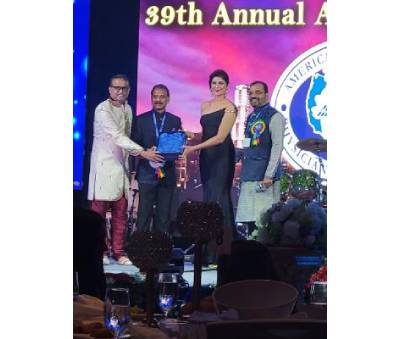 During the nearly 2 hours long live performance. She showcased the influences of her Indian-American heritage to create music that is refreshingly unique and contemporary, seamlessly fusing together the intricacies of Indian music with elements of electronic and hip-hop for an undeniably catchy sound.
The delegates were presented with live performances of Bhartanatyam, Thillana and fusion dances by local artists, displaying unique talents in Indian classical dance forms. The popular and much loved Mehfil E Khaas provided AAPI members and families a platform to showcase their talents impromptu, in music, dance, jokes and Shero Shayari in an informal setting.
A totally new feature at the Convention is the RealAssets Webinar on Crypto Currencies, featuring blockchain & cryptocurrency experts, who threw light on the paradigm shift taking place from regular finance to blockchain based cryptocurrencies, platforms & ecosystems. Sri Gauranga Das, a well-known Hindu Priest, Entrepreneur and a former Monk enlightened the audience with his wisdom.
Physicians of Indian Origin in the United States are reputed to be leading health care providers, holding crucial positions in various hospitals and health care facilities around the nation and the world. 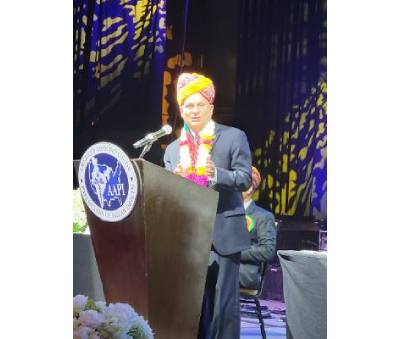 Known to be a leading ethnic medical organization that represents nearly 100,000 physicians and fellows of Indian Origin in the US, and being their voice and providing a forum to its members to collectively work together to meet their diverse needs, AAPI members are proud to contribute to the wellbeing of their motherland India and their adopted land, the United States. The convention is forum to network, share knowledge and thoughts, and thus, enrich one another, and rededicate ourselves for the health and wellbeing of all peoples of the world.  For more details, please visit:  www.aapiconvention.org/ www.aapiusa.org