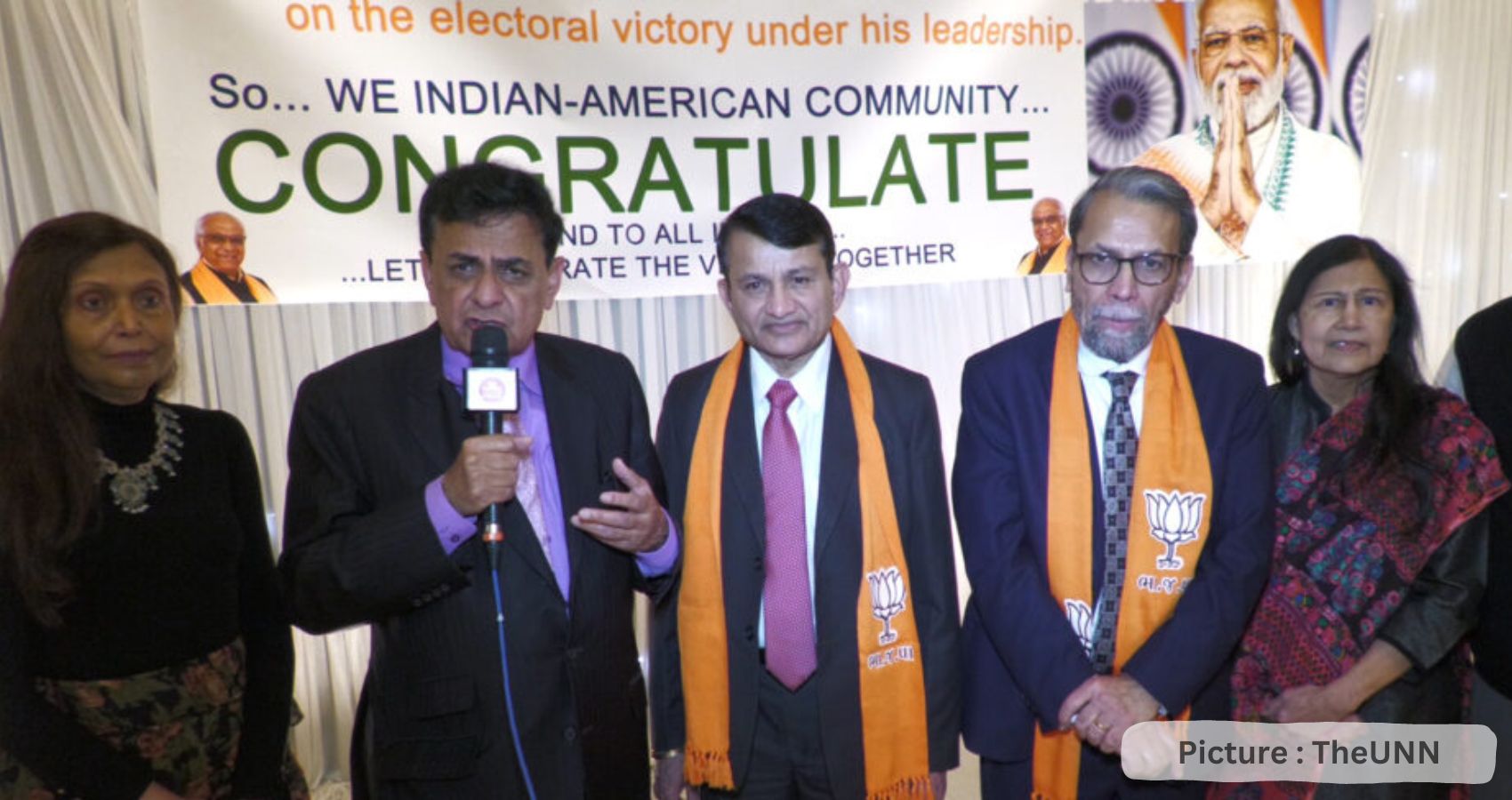 Hundreds of people happy with the Bharatiya Janata Party’s return to power in the recent state elections, came together to celebrate the victory at Royal Albert’s Palace in Fords, New Jersey. It marks the beginning of many such events being organized and held around the United States and the rest of the Indian diaspora.

Tri-state community leaders from New York, New Jersey, Connecticut, and surrounding areas, joined in congratulating leaders in India who were instrumental in achieving the BJP victory. They all praised the “hard work and dedication” of Prime Minister Narendra Modi who hails from Gujarat, and Chief Minister Bhupendra Patel for carrying out the vision of the Prime Minister and the task of development in that Indian state.

Dr. Sudhir Parikh, chairman of Parikh Worldwide Media and ITV Gold television which covered the visibly joyous event, called it a historic moment, and congratulated Prime Minister Modi and Gujarat Chief Minister Bhupendra Patel, adding, “Let us know what we can do to help Mother India.”

Dr. Vithal Dhaduk also described Modi as a superb, hardworking and dedicated leader and thanked the people of Gujarat for recognizing his qualities and bringing BJP back to the helm, as well as reinstalling Chief Minister Bhupendra Patel. Speaking later to Parikh Worldwide Mdiea, Dhaduk emphasized how the people of Gujarat who put their trust in Modi, “did what was best for the state. I wish the same success for national elections in 2024.”

Shobhna Patel of Royal Albert’s Palace, noted this was the first time that the venue was holding a BJP victory party, and called it an honor. She expressed the hope that BJP would win the 2024 general election in India, calling Modi a visionary, hardworking leader who had “made India Number One globally.” Addressing the crowd, she said BJP truly represents its name – a party of the people.

Dr. Sudha Parikh said she was proud of Modi and called it a historic victory, adding, “It is a one man show. We are very proud of his work for all of India.”

Pramod Bhagat of World Peace and Health Foundation, also lauded the BJP victory and thanked Parikh Worldwide Media for covering the celebrations, hoped that “Bharat Vishwa-guru bane” – that India become a teacher of the world. Speaking to ITV Gold, Bhagat praised Indians and Indian-Americans present for braving sub-zero temperatures to make it to the event in the middle of a work week.

Jagdish Sewhani called the Royal Albert’s Palace event, the biggest celebration outside India to date, with many more to come. The “younger generation can say they were here when the historic moment happened. Thanks to all for coming at such short notice,” Sewhani added. Speaking to ITV Gold he said, “People were pro-incumbency, for development, development, development,” he said. “Gujarrati Janata is smart – it believes nothing comes for free for the state or the country.” He praised Modi as a charismatic leader who held not only 31 public meetings, but also led a road-show for 50 kms where streets were lined with people.

Albert Jasani, founder of Royal Albert’s Palace, said he was grateful to organizers including Parikh Worldwide Media/ITV Gold, and the many people attending. He praised Modi and said he was a longtime friend of the Prime Minister.

Mukesh Kashiwala of the Indian American Community of North America said tri-state organizers and leaders had come together to celebrate the event. “Today we are celebrating the greatest victory in India and Gujarat. Today, we have gathered people from the tristate area organizations, to show their solidarity.” He also thanked Parikh Worldwide Media/ITV Gold for covering the event for viewers to see. “We should support whoever is doing good for India,” he said.