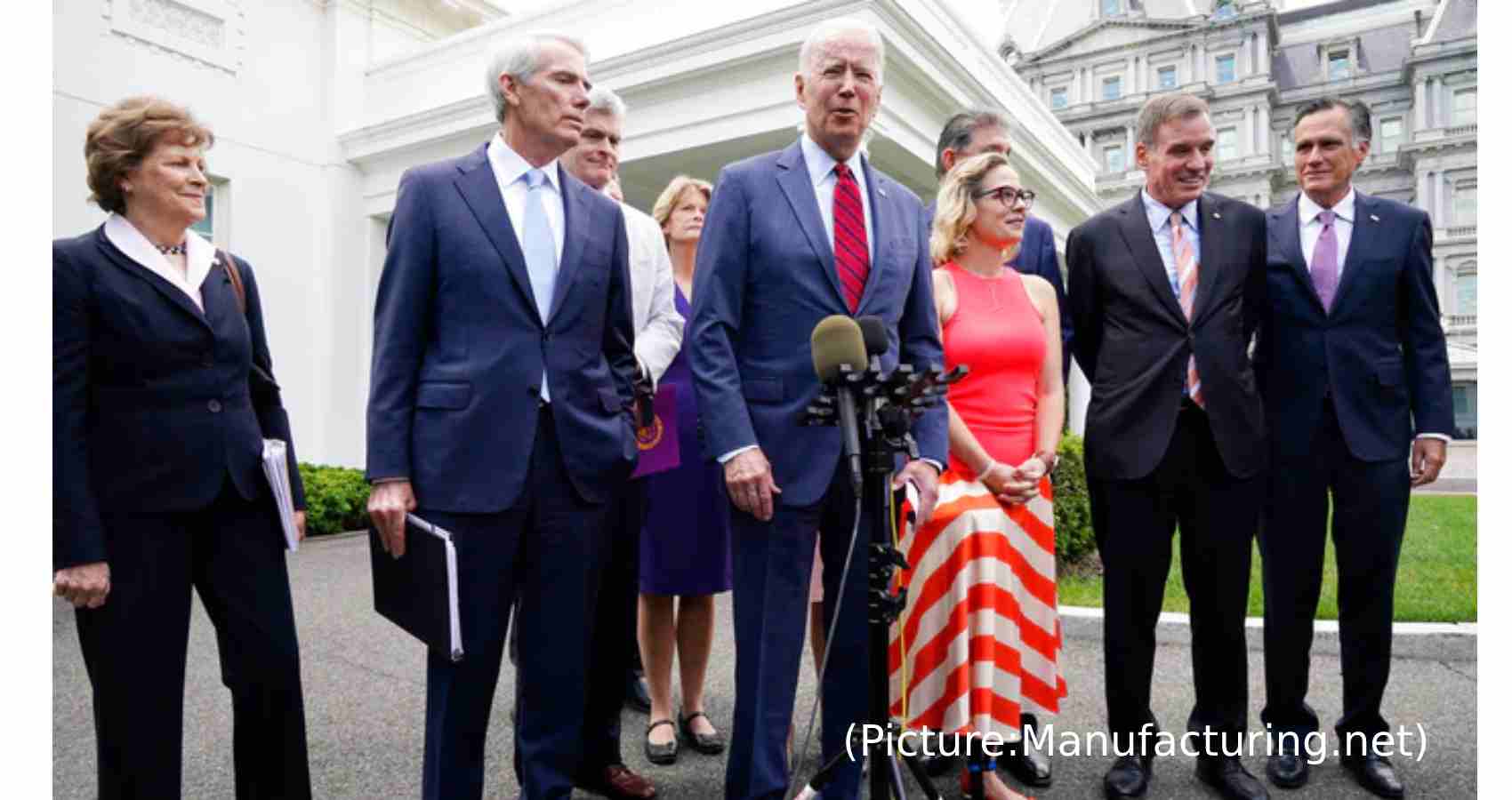 President Joe Biden and a bipartisan group of senators announced last week they had reached a framework $1.2 trillion infrastructure deal after a White House meeting just before Congress was about to leave town for a two-week recess. Speaking in the White House driveway, surrounded by smiling senators from both parties, Biden said, “They have my word, and I’ll stick with what they proposed, and they’ve given me their word as well — and where I come from, that’s good enough for me.” “We made serious compromises on both ends,” Biden said. “They did not — and I understand their position — the Republicans did not want to go along with the human infrastructure that I talk about, and we’ll see what happens in the reconciliation bill and the budget process,” he said. “If we get some compromise there and if we can’t, see if I can attract all Democrats to the position where they can move it on the dual track.”

Later on, Biden touted the deal in formal remarks from the White House East Room. “I said many times before, there’s nothing our nation can’t do when we decide to do it together, do it as one nation. Today is the latest example of that truth, in my view,” Biden began. “I’m pleased to report that a bipartisan group of senators, five Democrats, five Republicans, part of larger groups — have come together and force an agreement that will create millions of American jobs and modernize our American infrastructure to compete with the rest of the world in 21st century.” After touting the expansive package, Biden emphasized that it all comes without an increase on the gas tax, without fees on electric vehicles and “without raising a cent from earners below $400,000.” 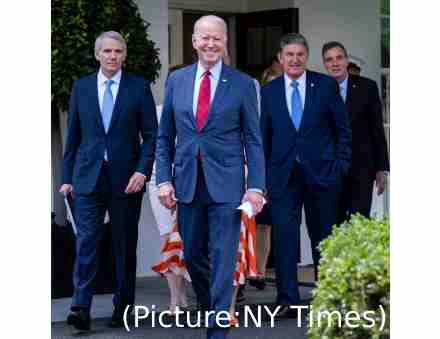 Biden said, though the deal isn’t exactly what he wanted, nor is it exactly what Republicans had in mind, the fact that they did reach a bipartisan, consensus makes their agreement all the more significant. “Let me be clear, neither side got everything they wanted in this deal. That’s what it means to compromise. And it reflects something important. Reflects consensus. The heart of democracy,” Biden said. The deal would see $1.2 trillion in spending over eight years, including $579 billion in new spending over the first five years. The senators, saying all sides had compromised and no one got everything they wanted, said they needed to head back to Capitol Hill to work out details.

“Today we are announcing the framework for a historic investment in infrastructure,” said Sen. Rob Portman, R-Ohio, one of the lead negotiators. “This is roads and bridges but also lots of other kinds of infrastructure including broadband, including our water system and rail system.” He praised the bipartisan effort. “I’m pleased to see us come together on a core infrastructure package. This is not non-infrastructure items, without new taxes, and with the commitment from Republicans and Democrats alike that we’re going to get this across the finish line,” Portman said.

“No one got everything they wanted in the package. We all gave some to get some — because what we did was put first the needs of our country,” said KyrstenSinema, D-Ariz. “We are delighted to go back to the Hill and begin earning more support from both Republicans and Democrats to get this bill across the finish line.” GOP Sen. Susan Collins called it the largest infrastructure package in U.S. history. She said the Senate has worked for decades to reach an infrastructure deal, so it’s “important” to show on the world stage that bipartisanship is possible in the U.S.

“We’ve agreed on the price tag, the scope, and how to pay for it. It was not easy to get agreement on all three, but it was essential,” she said. “It was essential to show the American people that the Senate can function, that we can work in a bipartisan way, and it sends an important message to the world as well, that America can function, can get things done.” Once the bill’s language is nailed down, it will have to pass through both chambers of Congress before Biden can sign the legislation — which Democrats warn will only come if a separate, reconciliation bill focused on “human infrastructure” is also approved.

Earlier Thursday, Sen. Joe Manchin, D-W.Va., told Capitol Hill reporters that 21 senators and Biden’s White House negotiators had reached an agreement on the plan’s “framework,” the same language other other senators used late Wednesday. Asked what areas still need to be worked out, Manchin said, “That’s why we’re going to go talk to President Biden.” “President Biden is the ultimate person that will have to sign off on this, to make sure he’s comfortable, and he wants a bipartisan deal,” Manchin said. “It’s a matter now, was the president comfortable.” Biden has been hoping for a bipartisan plan that can serve as landmark legislation for his presidency.