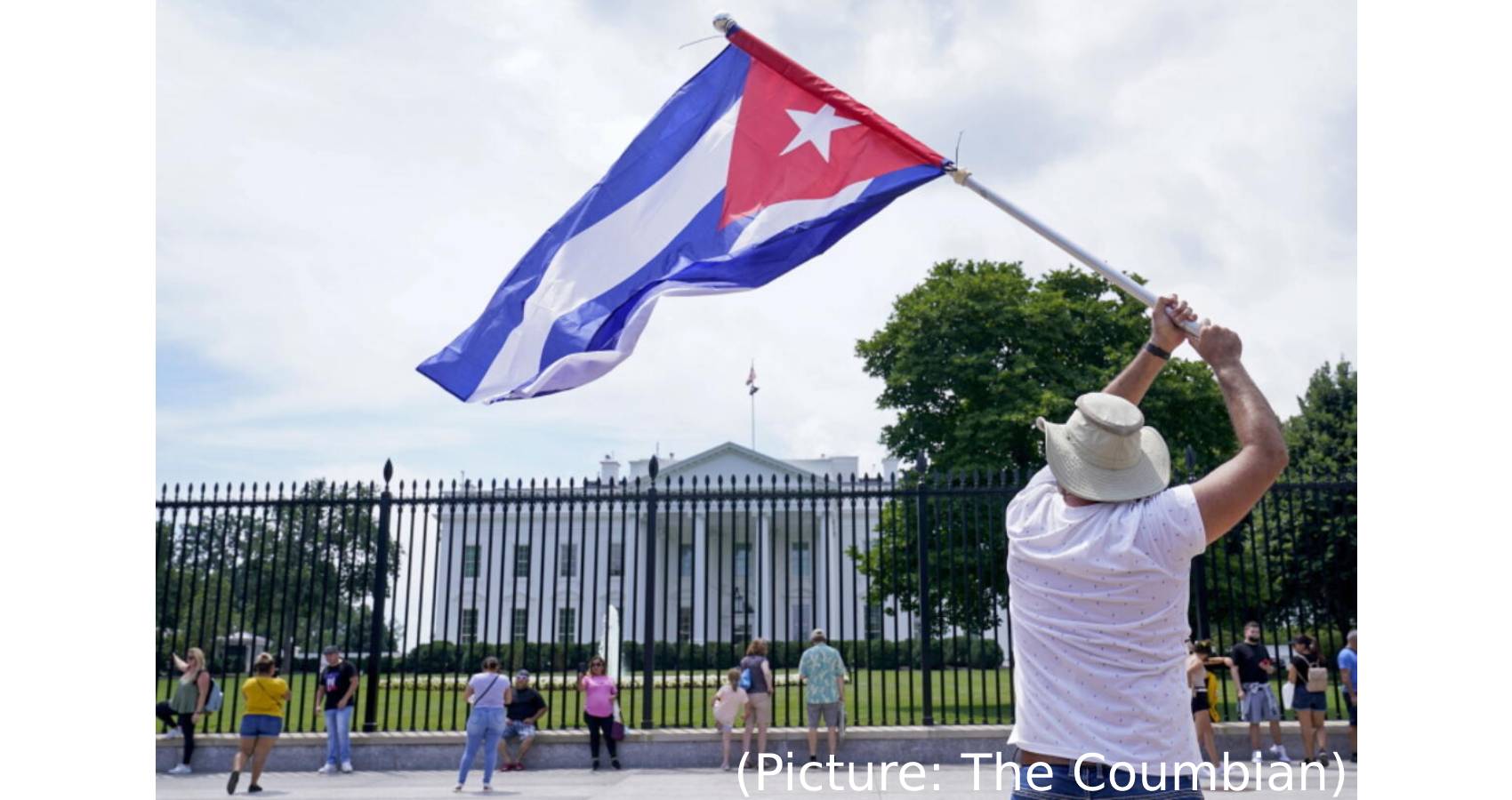 President Joe Biden on Monday called protests in Cuba “remarkable” and a “clarion call for freedom,” praising thousands of Cubans who took the streets to protest food shortages and high prices amid the coronavirus crisis — one of the island’s biggest antigovernment demonstrations in recent memory.

The pandemic’s blunt impact on Cuba’s economy, already struggling under the Trump-era tightening of sanctions, has brought the island to the brink of its worst food shortages in 25 years. Empty supermarket shelves, the crippling pandemic and recent access to social media allowing Cubans to openly share their outrage all helped lead to Sunday’s rare protests against the communist regime. Thousands marched in Havana and other cities to protest the lack of food and COVID-19 vaccines, with many demanding an end to the 62-year-old dictatorship, chanting “Freedom!” and “Enough!” Social media posts showed some protestors overturning police cars and looting supermarkets. Cuban security forces cracked down, arresting more than 80 people, including some well-known activists and dissidents. 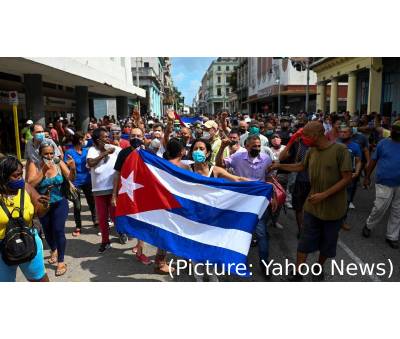 In a televised address to the nation on Monday, Cuban President Miguel Díaz-Canel, who took over the presidency from his mentor Raul Castro in 2018, blamed the demonstrations on the U.S.’s “policy of economic suffocation” and accused the “Cuban-American mafia” of provoking social unrest in the country. In the heart of Miami’s Cuban-American community on Sunday, more than 5,000 people demonstrated in solidarity with the protestors, with Mayor Francis Suarez calling for a U.S.-led intervention.

Díaz-Canel’s response to the protests is “straight out of Fidel and Raul’s playbook, by accusing these people of being mercenaries, and saying we need to get our counter-protestors out into the streets,” says Paul Hare, a former British ambassador to Cuba. “But this couldn’t have happened a few years ago. This coordinated, island-wide protest…is the first real Internet age, social media challenge that he’s faced.”

President Joe Biden lent his support to the protestors on Monday, but he did not mention the U.S. sanctions on the nation that he pledged to review during his campaign. “We stand with the Cuban people and their clarion call for freedom and relief from the tragic grip of the pandemic and from the decades of repression and economic suffering to which they have been subjected by Cuba’s authoritarian regime,” Biden said in a statement. The White House declined to detail any potential policy changes towards Cuba.

While Cuba’s socialized health care system first appeared to cope with the pandemic better than many of its wealthier neighbors, dispatching its highly trained doctors to other countries, the economic fallout was severe. The island’s crumbling state-run economy, already hurting from former President Donald Trump’s toughened trade embargo, shrank 11% last year. As tourism dried up, and with it the hard currency many had come to depend on, the country suffered its worst food and medicine shortages since the fall of the Soviet Union. With the lack of foreign currency limiting access to fuel and fertilizer, this year’s harvest of sugar, an important export, barely reached two-thirds of the planned production, the smallest crop in more than a century. Widespread power outages have left many Cubans with increasingly severe blackouts. Meanwhile, COVID-19 cases and hospitalizations have surged.

“It was only a matter of time. Frustration and despair had accumulated, and this Sunday the streets exploded,” dissident Cuban blogger Yoani Sanchez wrote, describing how the “spark from San Antonio de los Baños,” where the protests began, had “ignited in the dry grass of social anger.” On Instagram, Cubans across the world shared an image that said in big white and red letters “Asking for help isn’t a crime, denying it is.”

The fast escalation has put a spotlight on the Biden Administration’s drawn-out review of U.S. Cuba policy, and apparent reluctance to reverse Trump’s measures. Biden was Vice President when President Barack Obama and Raul Castro agreed to re-establish diplomatic relations in 2014, leading to the first face-to-face discussion between leaders of the two countries in half a century. The historic detente also eased or lifted many restrictions on business with and travel to Cuba. When direct flights to Cuba reopened in 2016, American tourists flooded the island. Most Cubans welcomed the valuable influx of U.S. dollars, which benefited drivers to restaurant owners to average families who were able to rent out rooms to tourists. Internet usage rapidly expanded with the rise in income, and in 2018 Cubans were able to get full online access on their mobile phones for the first time.

But the relationship quickly deteriorated under Trump. Citing his campaign promise to reverse Obama’s measures, which he said empowered and enriched Cuba’s communist regime, his Administration put in place 240 sanctions and economic measures, including a ban on American cruise ships stopping in Cuba, prosecution of foreign companies that do business with the country, and a blacklist of several Cuban companies. The latter included Fincimex, the financial institution used by Americans to send vital remittances to their families on the island.

In 2017, after alleged sonic attacks left more than two dozen Americans stationed in Havana with mysterious brain injuries, the Trump Administration also drastically cut U.S. diplomatic staff. (Cuba has denied responsibility for the injuries, whose cause has not yet been determined.) The State Department followed with a travel warning telling Americans to avoid traveling to Cuba. According to Cuban officials, all of Trump’s measures cost the island more than $20 billion. “The damage to the bilateral relationship during this time has been considerable, and the economic harm to Cuba immense,” Johana Tabalada, a senior foreign ministry official, said in January 2021.

“We stand with the Cuban people and their clarion call for freedom and relief from the tragic grip of the pandemic and from the decades of repression and economic suffering to which they have been subjected by Cuba’s authoritarian regime,” Biden said in an earlier statement Monday. “The Cuban people are bravely asserting fundamental and universal rights.”