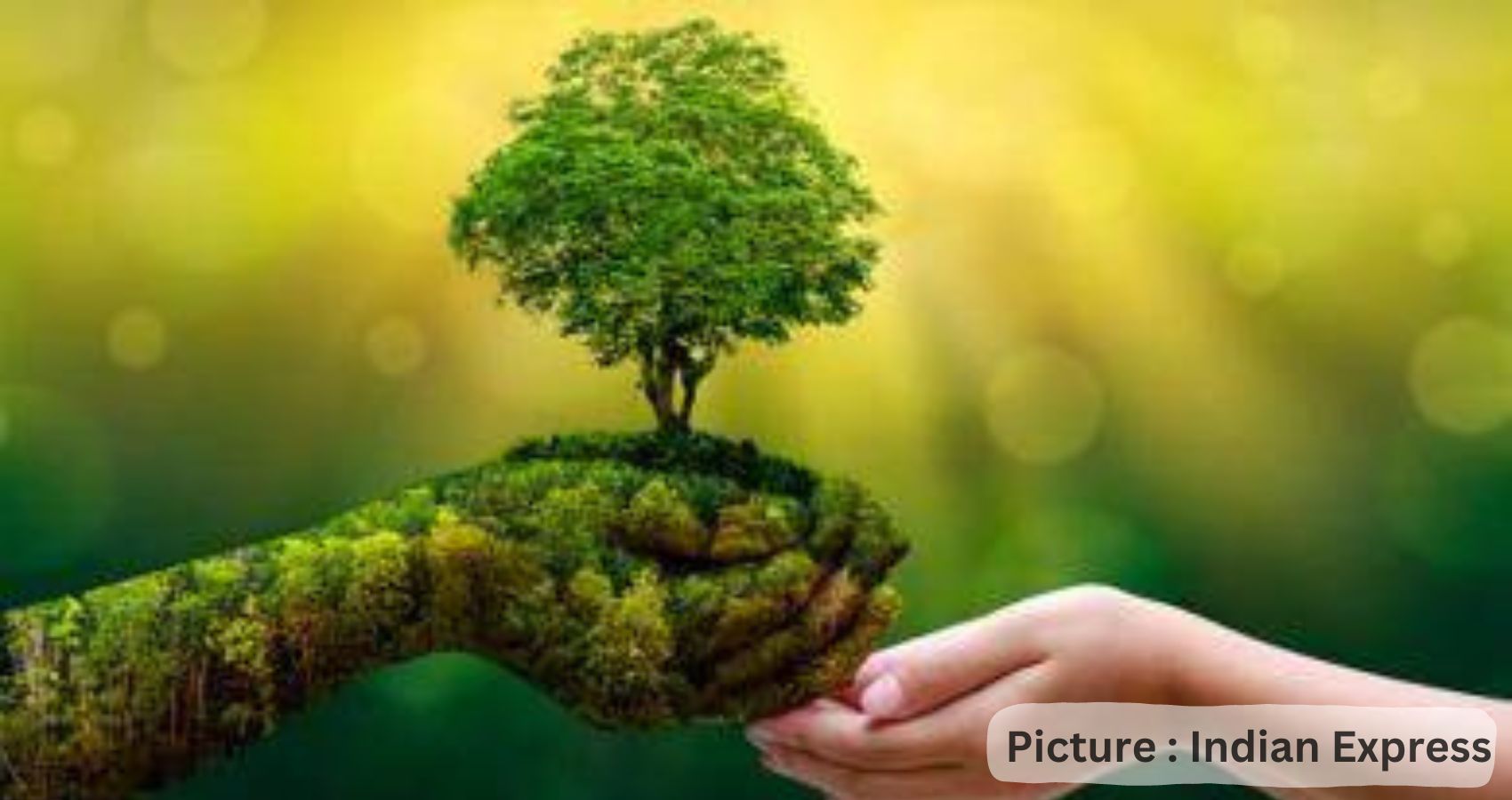 India on November 14, 2022 announced its long-term strategy to transition to a “low emissions” pathway at the United Nations Conference of Parties (COP) ongoing in Sharm el-Sheikh, Egypt, which is premised on expanding its nuclear power capacity by at least three-fold in the next decade, apart from becoming an international hub for producing green hydrogen and increasing the proportion of ethanol in petrol.

These steps, Environment Minister Bhupendra Yadav said, were consonant with India’s “five-decade journey” to net zero, or being carbon neutral by 2070 — a commitment made by Prime Minister Narendra Modi at Glasgow, where the 26th COP was held last year.

India on Monday released its long-term climate action strategy, detailing how it will take steps like rapidly expanding renewable energy sources and exploring a greater role for nuclear power to reach net zero emissions by 2070, but separately also turned up the heat on developed countries to do more.

Environment minister Bhupender Yadav, representing India at the UN Climate Conference (COP 27) at Sharm El Sheikh in Egypt, used two occasions at the summit to call on rich countries to do more: first, he said, some of them must reach net zero emissions even before 2030, and, second, they must elaborate on their immediate plans on how they plan to reach their targets since some have “turned back to fossil fuels” due to the ongoing energy crisis.

The first stance was made during the ministerial high-level roundtable on the pre-2030 ambition, where Yadav pointed out that rich nations had not met their commitments for the 2020 deadline. “So pre-2030 ambition must be measured in terms of whether countries are staying within their fair share of the carbon budget, taking note of both the historical period and in the future. By this scientific criterion, some developed countries must reach net zero even before 2030 and 2050 is not enough at all,” Yadav said in his intervention.

The other calls on rich countries to do more were articulated during the launch of India’s long-term low emission development strategy (LT-LEDS), which India released on Monday, becoming one of only 57 countries to do so.

“We also call upon developed countries to elaborate on their immediate plans on how they would achieve their targets. We see that following the current energy crisis, many have turned back to increased fossil fuels for energy security. It is not enough to say that targets for emissions reduction will be met, when the reality is that they will unequally consume even more of the carbon budget,” Yadav said.

“In a COP of Implementation, it is essential to make progress on adaptation and loss and damage. Now is the time to tell the developing world how the promise of USD 100 billion is to be met. We, at Glasgow, noted with regret that it is indeed not being met. The world would like to know how the resources for meeting the world’s adaptation needs, whose estimates are rising constantly, are to be mobilised.”

First, India has contributed little to global warming despite being home to a sixth of the world’s population; Second, India has significant energy needs for development; Third, India is committed to pursuing low-carbon strategies for development and, fourth, India need’s climate resilience.

“The LT-LEDS has been prepared in the framework of India’s right to an equitable and fair share of the global carbon budget. This is the practical implementation of India’s call for “climate justice,” he said.

Developments over recent days suggest rifts are widening over developing nations such as India and developed countries over the climate crisis action plan.

US Special Climate Envoy John Kerry said on Sunday that a few countries have resisted mentioning a global goal of limiting warming to 1.5°C in the official text of the COP 27, Euronews reported.

A senior delegate from India also said on Saturday that during meetings on mitigation work programmes (MWP) – measures that relate to lowering emissions — rich countries outlined the top 20 emitters and insisted that the measures be addressed to these.

This is key because many of the top emitters in absolute terms are developing countries like India, China and Brazil, but in per capita terms, and when historical emissions are considered, their role in the warming of the planet has demonstrably lower than industrialised western nations.

Observers also said US and other Annex 1 countries were trying to selectively push a language on 1.5°C goal that goes against principles of equity and “common but differentiated responsibilities” that were agreed upon under the Paris Agreement, and indirectly pushes all countries to embrace net zero emission goals by 2050.

“You cannot selectively use the 1.5°C goal for cover text when finance to achieve that goal has not come through. We will oppose such moves because it’s not equitable” said a member of the Indian delegation, asking not to be named.

Scientists and independent experts have already said that the 1.5 degree C goal seems practically impossible to achieve under current circumstances and the world needs to immediately cut emissions to levels last recorded in 2020, when widespread lockdowns shut industrial and civilian activity across the world for months on end.

“It’s developing countries who will face far more severe consequences if we breach the target of limiting the global temperature rise to 1.5°C. Rich industrialised countries are cherry-picking language from the climate talks at COP 27 to shift the blame to poorer nations, while using all possible tricks to delink emissions reduction targets with equity and their obligation to provide scaled up finance,” said Harjeet Singh, Head of Global Political Strategy, Climate Action Network International.

The submission to the LT-LEDS builds on India’s nationally determined contributions (NDCs) declared at the UN Framework Convention on Climate Change in August, as part of the binding commitments that have to be made under the Paris Agreement.

The NDCs articulate a net zero commitment by 2070, and vow that India will reduce the emissions intensity of its gross domestic product (GDP) by 46% from 2005 levels by 2030, and achieve about 50% cumulative electric power installed capacity from non-renewable sources by the end of this decade.

The long-term plan now builds on the 2070 goal with six elements: These include: expanding renewables and strengthening the grid; exploring a greater role for nuclear energy and enhancing support for R&D into future technologies such as green hydrogen, fuel cells, and biofuels; appropriate demand-side measures such as energy efficiency improvements; rational utilisation of fossil fuel resources; enabling a focused transition towards low carbon development; and optimum energy mix complimenting national development scenarios.

The strategic transitions will be sectors including electricity, transport, urbanisation, industry, CDR (carbon dioxide removal), forests, finance and investment, research and innovation, adaptation and resilience, LiFE – Lifestyle for Environment, and international cooperation. Under electricity for example, the focus will be on expanding renewables and strengthening the grid.

On carbon removal, the focus will be on economic, technical and political feasibility of carbon capture utilisation and storage (CCUS), which is highly uncertain according to officials from the Indian delegation.

A transition to a low-carbon development pathway will involve costs, pertaining to the deployment of new technologies, development of new infrastructure, and other transaction costs. “In the longer term, such a transition will also have broader economic impacts. Several estimates regarding India’s financial needs exist. Many of them focus on the energy sector, including industry, buildings, and transport. Estimates vary across studies due to differences in assumptions, coverage, and modelling approaches, but fall in the range of trillions of dollars by 2050. In general, finance needs – and the domestic financing gap – are considerable, indicating a need for greater international support,” the LT-LEDS report has said.

“India’s LT-LEDS is an important statement of intent to pursue low-carbon strategies for development, and a sound beginning toward doing so,” said Navroz K Dubash, professor, Centre for Policy Research, which anchored the research for India’s long-term strategy. The strategy is firmly, and appropriately, anchored in considerations of climate equity. It calls for developed countries to undertake early net-zero and to provide adequate finance and technology in support of India’s plans for low-carbon development, CPR said in a statement.

“India’s LT-LEDS should be viewed as a living document. Future iterations should emphasize robust and transparent modelling towards net-zero by 2070, clearer identification of sectoral co-benefits and trade-offs, and more detailed discussion with states,” Dubash added.

At the ministerial that Yadav addressed earlier, India also made it clear that carbon offsets of the kind US announced on November 9, called the Energy Transition Accelerator (ETA), may not be able address climate finance needs of developing countries. “Leaving it to markets alone will not help. Markets function well in normal times, but either do not function or function very inequitably in moments of crises. We see this with the energy crisis in developed countries,” Yadav said.

Yadav called for an “ambitious flow of financial resources from various sources”, with “with developed countries playing a pivotal role in incentivising flows to developing countries so that finance-the key means of implementation- is at grant/concessional rates”.

“Access to finance and technology in developing countries is a must-have if we expect to protect our Earth and ourselves from apocalyptic changes. The commitment made by the developed countries to mobilize $100bn from diverse sources by 2020 was a meagre amount and remains unachieved till now. The current needs of developing countries are estimated to be in the order of trillions,” Yadav said.

“Evidently, there is no understanding of what really comprises climate finance. Transparency and Trust are the backbones of all multilateral discussions,” Yadav said.