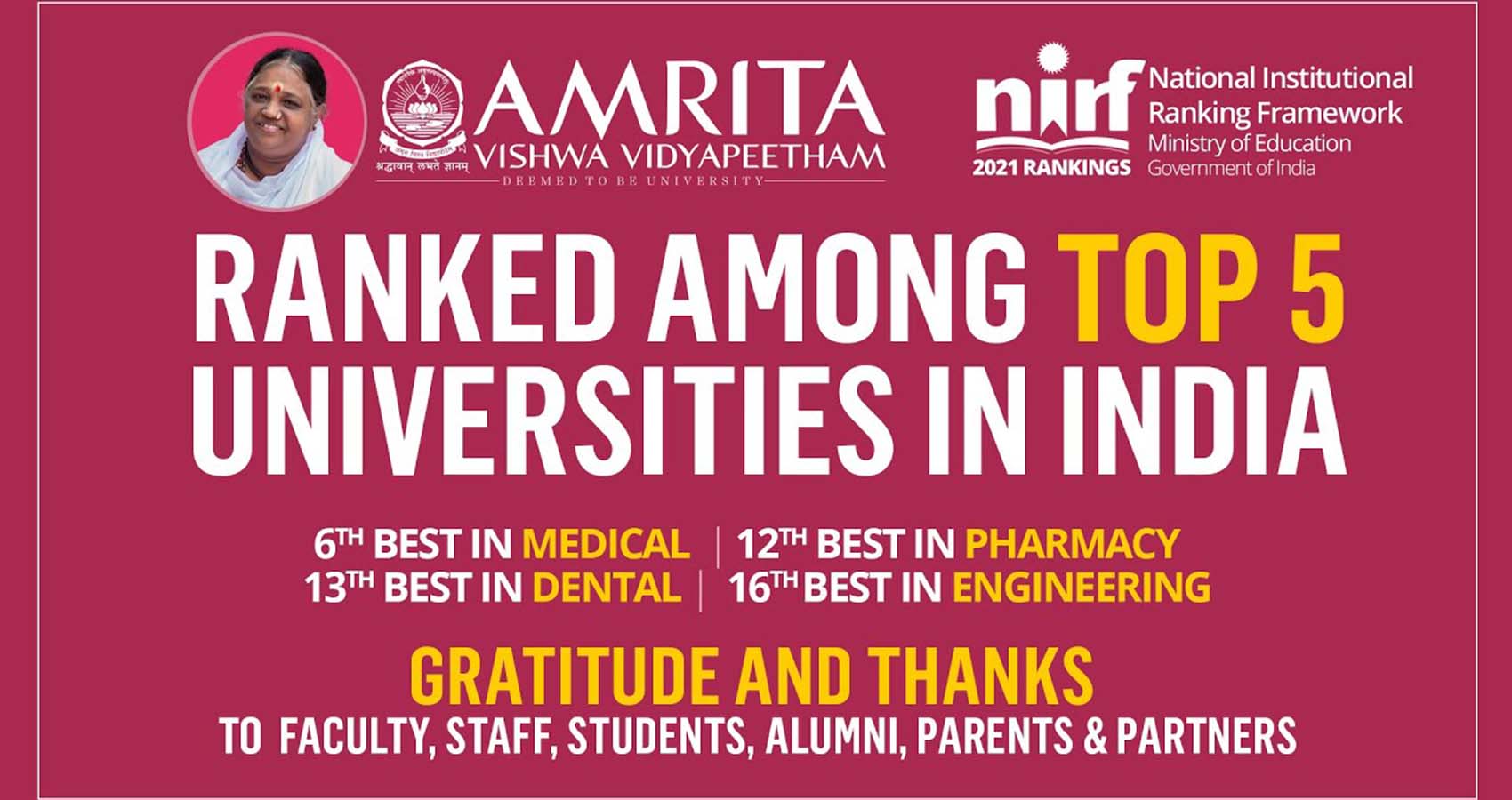 Amrita University is hogging the headlines. Yet again. This time, it has been for the A++ accreditation the highest it has received from NAAC, the national body that assesses Higher Education Institutions in India. Amrita is the youngest in the club. This recognition follows close on the heels of several others. In 2021, it was ranked the 5th best Indian university in the NIRF rankings. Additionally, the university was ranked 81st worldwide in the Impact rankings for the same year. And besides, in the QS rankings, Amrita has been rated as among the best universities in the world consistently over the years.

It’s interesting to see why the university has continually been grabbing the limelight since its inception eighteen years ago and why it has emerged as one of the most sought-after institutions within what certainly is a short span of time. In addition to the two more universities that are coming up in Faridabad and Amravati, six campuses, each in a different setting, now comprise Amrita University. One of them the headquarters in Coimbatore – is backdropped against the stately hills of the Western range. While the mirror-still backwaters of Kollam surround the campus at Amritapuri. The campus at Mysuru perches itself on the foothills of the Chamundi hills. And those at Kochi, Chennai and Bengaluru are framed by the silhouetted skylines of these cities in the distant horizon. 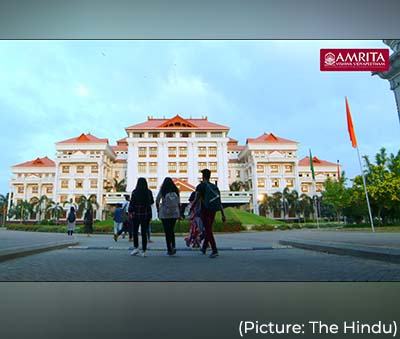 But if you step inside these campuses and peer into the minds of the people who work, teach and learn here, there is something that is distinctly common running through all of them. It is a set of values, beliefs, and practices, all at once.

You pick this up from what you see, whom you meet, and what you hear from the conversations you hold with them. “At Amrita Vishwa Vidyapeetham, what we aim to produce is the synthesis of the education for life with the education for living,” points out Dr Venkat Rangan, Vice-Chancellor of the university. “We strive to bring the two together, to shape our students into people who balance competence in their profession with purpose in their lives,” he adds.

Such vision is brought alive through numerous on-ground practices. Take their Live-in Labs, for instance. In this program, the students choose to live in rural communities for a period of time typically several months to first identify and then understand the villagers’ problems, and later, to work with them, eventually arriving at solutions that are both innovative and sustainable in equal measure.

The result has not just been an experience that brings about a powerful transformation in the perspective that each participating student holds of the world. It has also been the lasting transformation of the lives of over two hundred thousand people in more than a hundred villages of India. Notably, over 400 international students from more than 40 international partner universities have participated in this program thus far.

Or consider another custom that sets this university apart compassion-driven research. “At Amrita, compassion is not a mere emotion. It is a path of action,” says Dr Raghu Raman, Dean, School of Business. “It is a theme that is driven by our Chancellor, and in turn, one that drives the vision and practices of the university. The objective is single-minded: social impact. And it runs through all our thrust areas of research in Science, Technology, Medicine, Ayurveda, Humanities and Social Sciences. Interestingly, it also aligns with several of the United Nations Sustainable Development Goals for the world at large,” Dr Raman explains.

Over 1000 scholars in more than 30 research centres at Amrita synergise diverse disciplines in their effort to develop solutions with real-world applications. From 2016-2021, around 59800+ citations and 12050+ publications were published. The payoff has been enormous. 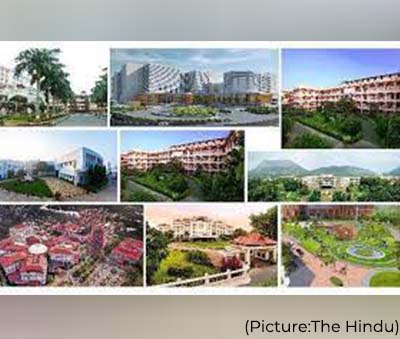 The Wireless Sensor Network for Landslide Detection, for example, is a low-cost system that integrates knowledge from multiple domains earth science, communication & networking, analog and digital circuits, to name a few. The system has been designed to detect landslides twenty-four hours ahead of time. It has received a U.S patent, and the university, as a result, is now officially recognized as a World Centre of Excellence for Disaster Risk Reduction.

OceanNet offers low-cost internet connectivity for fishermen at the sea, even if they are 60 kilometres away from the shore. Multiple drug-embedded Nano Polymer Wafers have been developed and successfully deployed to treat brain cancer. Cocobot -the coconut harvesting robot has helped farmers with timely yield as much as it has helped regulate the price of the nuts. Amrita Virtual Interactive E-Learning World (A-VIEW) is a multi-modal, e-learning platform built to provide an immersive e-learning experience that emulates a real classroom experience.

Further, The Amrita Center for Research in Analytics, Technologies & Education (Amrita CREATE) is an affordable educational technology initiative pioneered by Amrita Vishwa Vidyapeetham, exclusively focussing on UN SDG 4. Digital learning solutions like Online Labs, which use interactive simulations and animations, have benefitted more than 50000 teachers and 4 lacs learners, reaching over 12000 schools in 21 states. During the pandemic, when students could not access physical labs due to school closure, Online Labs to practice lab experiments was used by more than 34 lacs users. Also, to provide cost-effective diabetic care to the masses of India, which is witnessing a massive spurt in cases of diabetes, Amrita’s School of Biotechnology has developed a cost-effective insulin pump and non-enzymatic glucose sensors with US patents licensed to Wipro Technologies.

It is also notable that among the private players in the educational sector, Amrita has the largest number of collaborations with the leading universities around the world, continually attracting reputed faculty from among them, including from the envied Ivy League, and, as a result, reversing a brain-drain into a brain-gain for the country. Unsurprisingly, those who graduate from the university turned out to be among the most wanted in the areas they specialise in.

Top corporate houses of the world, including Google, Cisco, Microsoft and SAP, train their sights on Amrita when they scout for resources. As a result, 95% of the students are placed in leading MNCs, luring them with compensation packagesas high as Rs 65 lacs per annum.

“The world’s best companies look for the world’s best resources to populate them,” says Thejas Menon, alumnus and now employed as Production Manager at Tesla Inc. at Nevada in the US. “These are the days when employers look beyond the depth of your proficiency and into the breadth of your worldview,” Menon adds.

Amrita University is more than an Institution of Eminence. It is a 50,000-strong community of scholars, teachers and alumni that power social change.

And if you are looking for their collective motivation, it is easy to find it in the words of the Chancellor, Mata Amritanandamayi Devi: “Life and living are not the same. For living, we may need a job, money, a home, a car and other creature comforts. But for life, a complete life, you also need love, compassion, and maturity both in thought and in action.”