Notice: register_sidebar was called incorrectly. No id was set in the arguments array for the "Homepage Sidebar" sidebar. Defaulting to "sidebar-4". Manually set the id to "sidebar-4" to silence this notice and keep existing sidebar content. Please see Debugging in WordPress for more information. (This message was added in version 4.2.0.) in /home/universalmirror/public_html/theunn.com/wp-includes/functions.php on line 5311
 AAPI, GOPIO, AIA, NFIA & ASEI Jointly Host Discussion On The Book, “Kamala Harris and the Rise of Indian Americans” - Universal News
Skip to content 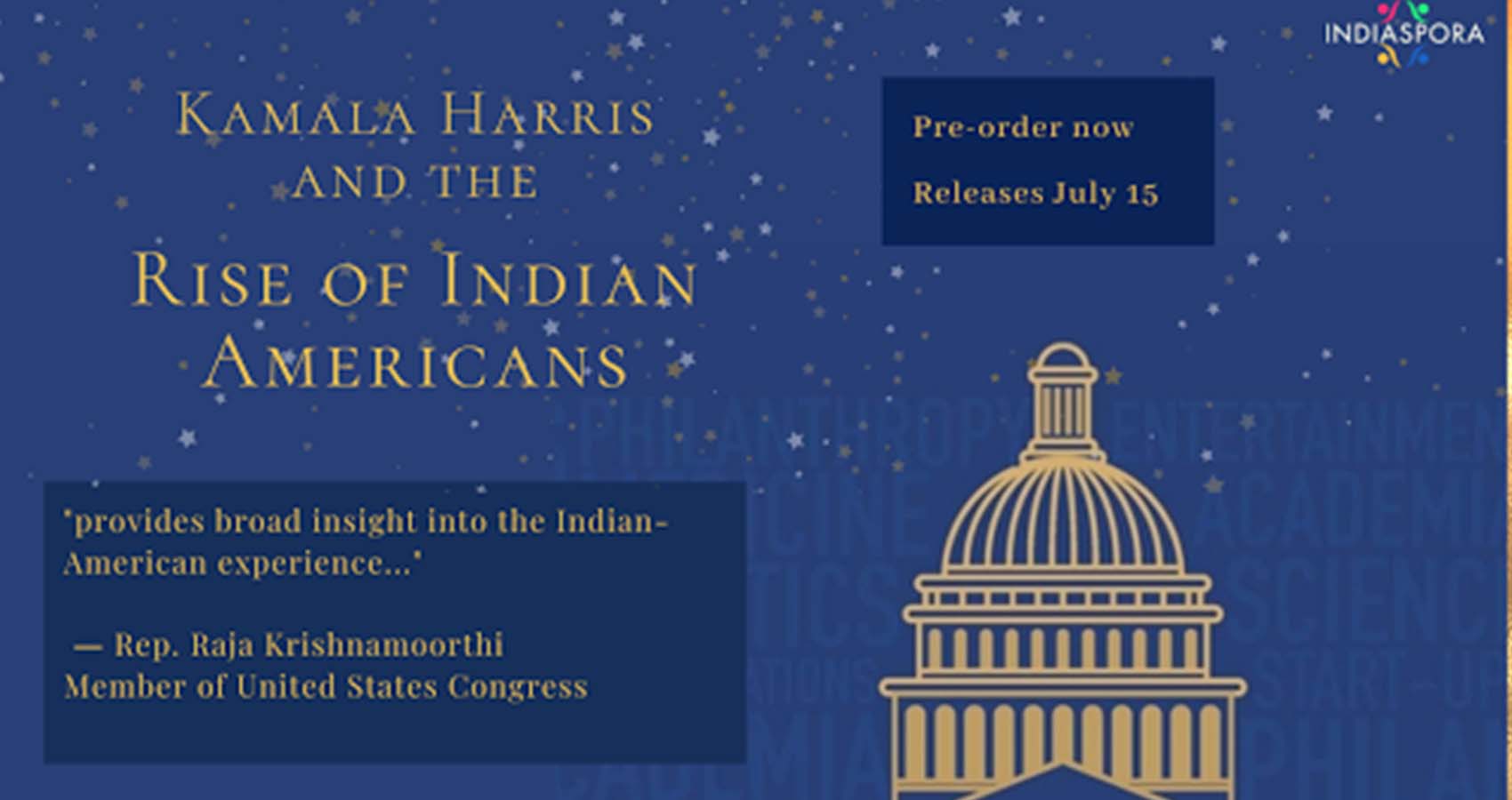 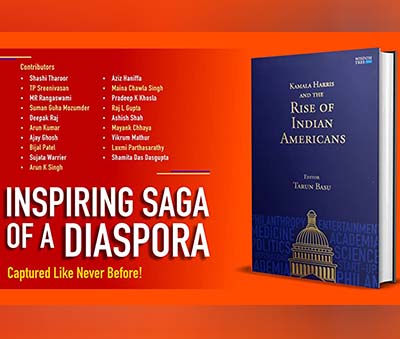 Edited by the Delhi-based veteran journalist and foreign policy analyst, Tarun Basu, the evocative collection titled, “Kamala Harris and the Rise of Indian Americans,” captures the rise of the Indians in the US across domains by exceptional achievers. Sixteen eminent journalists, business leaders and scholars have contributed essays to the timely and priceless volume, which charts the community’s growing and influential political engagement.

The book was released by New Delhi-based publisher Wisdom Tree and is available in the U.S. via Amazon. Describing the book as an “eclectic amalgam of perspectives on the emerging Indian-American story,” Tarun Basu said, “This evocative collection—of the kind perhaps not attempted before—captures the rise of Indian-Americans across domains, by exceptional achievers themselves, like Shashi Tharoor, the ones who have been and continue to be a part of the “rise,” like MR Rangaswami and Deepak Raj, top Indian diplomats like TP Sreenivasan and Arun K Singh, scholars like Pradeep K Khosla and Maina Chawla Singh, and others who were part of, associated with, or keenly followed their stories.”

In his remarks, Shobit Arya, publisher of the book, shared with the audience about the objectives of publishing such an important book that portrays the lifestory and achievements of the influential Indian American community.

Dr. Thomas Abraham, Chairman, GOPIO International, who is the main organizer and moderated of the session, who has been instrumental in establishing and leading several Indian  American organizations and has seen the rise of the community in the past half a decade, shared with the audience the major highlights, depicting the progress and achievements of the community.

“My own involvement in the community for the last 47 years as the Founder President of FIA New York, National Federation of Indian American Associations and GOPIO, I want to give some Milestones of our community since the late 1970s,” Dr. Abraham said and enumerated the major milestones of the Indian Americans, starting with the formation of the first national organization in 1967, Associations of Indian America (AIA), and succeeding in its efforts to have the Asian Indians categorized in the 1980 Census, and now culminating in dozens of Indian Americans holding important positions in the US administration and several dozens elected to local, state and national offices across the nation.

“History of Indian community organizations and the role played by these organizations in community development, mobilization and promoting the diverse interests such as education, political involvement, entrepreneurship, business and service industry are covered in this new book,” Dr. Abraham said. 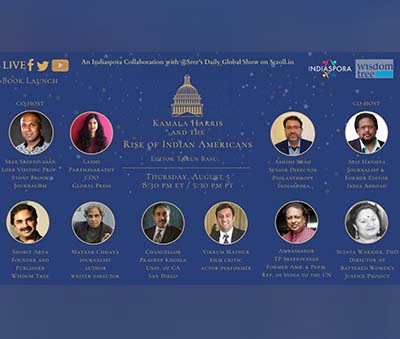 While acknowledging the success story of Indian American physicians, Dr. Anupama Gotimukula, President of AAPI said, “The success story of Indian American Doctors has been arduous. As Ajay Ghosh, who has been working for AAPI for nearly a decade has aptly summarized this long and difficult journey: “While Indian American physicians play a critical role, serving millions of patients in the United States, leading the policies and programs that impact the lives of millions today, it has been a long and arduous journey of struggles and hard work to be on the top of the pyramid.”

Dr. Gotimukula pointed out, “Indian American Doctors, who have been recognized for their compassion, skills, expertise and skills in caring for their patients, leading research that brings solutions to health issues and at the table making policies that benefit the world, are at the  at the forefront around the world as shining examples of meeting the needs of the hour.” She congratulated Tarun Basu, Shobit Arya and the 16 veteran journalists who have contributed to the book.

Dr. Ravi Kolli, President-Elect of AAPI spoke about how the Covid pandemic has impacted all and how the physician community who has borne the brunt of this epidemic is coping with the stress and the negative effects, while providing critical care to people diagnosed with Covid virus. Dr. Satheesh Kathula, Treasurer of AAPI and Dr. Sampat Shivangi, President of Indo-American Political Forum were others how had joined in the discussions.

Ambassador TK Srinivasan, who had served as the Indian Ambassador to the US and as the Permanent Representative of India to the United Nations, shared with the audience, his own experiences with the Indian Diaspora and how they have contributed to the larger goals of cementing stronger relationship between India and the United States.

In her remarks, Dr. Lavanya Reddy, president of NFIA said, “National Federation of Indian American Associations (NFIA), the largest non-profit umbrella organization of Indian association, established in 1980, aims to unify the diverse Indian American community by coordinating and promoting the activities of its member associations. NFIA has been in the forefront of activities in US-India relations for over two decades.”

Describing the many contributions and objectives of ASEI, Piyush Malik, the current president said, “Since its inception in 1983, ASEI has strived to strengthen the Indo-American relationship, institute a channel of communication between technical organizations within the United States and abroad, lend a helping hand to charitable organizations, provide assistance to engineering students at the Local and National levels, and organize networking events.”

Dr. Urmilesh Arya, President of Association of Indians in America (AIA) spoke about the objectives and activities by AIA for the past several decades. “AIA is a grass root national organization of Asian immigrants in the United States, fostered on the democratic principles of “one member one vote”, with chapters and membership spread across the United States of America. AIA represents the hopes and aspirations of those immigrants who are united by their common bond of Indian Heritage and American Commitment.”

Journalist Arun Kumar who wrote a Chapter in the Book on “All the President’s People: Trust in the Corridors of Power” spoke about the increasing number of Indian Americans how have come to occupy critical roles in the US administration, starting with President Ronald Regan and currently having as many as 50 Desis, who occupy important positions in the Biden administration.

Mayank Chaya, another author who wrote on: “At the Center of Excellence: Seminal Contributions in the World of Science” presented how Indian Americans have come to lead research and scientific innovations across the United States.

The importance and high esteem with which physicians of Indian heritage are held by their patients is self-evident, as they occupy critical positions in the healthcare, research and administrative policy positions across America, including the nomination of the  US Surgeon-General, Dr. Vivek Murthy.

In his presentation, Ajay Ghosh who has portrayed the rise of the Indian American physicians as a strong and influential force in the United States, chronicling their long journey to the United States and their success story, in a Chapter titled, “Physicians of Indian Heritage: America’s Healers” spoke about the four distinct areas, he has tried cover in the book: “Indian American Physicians Being recognized as Covid Warriors who work as frontline healthcare workers treating millions of patients.

With anecdotes, Ajay presented the “Initial struggles of Indian American Physicians” in securing equality with the local American Doctors in Board certification and licensing and the lobbying and legal efforts imitated by the pioneers.  He referred to Dr. AnandibaiJoshi, the first documented physician of Indian origin who had landed on the shores of the United States in 1883 and detailing the decimation suffered by Dr. Yellapragada Subbarow in the early 20th century, who has been credited with some of the biggest contributions in more than one basic field of science—biochemistry, pharmacology, microbiology, oncology, and nutritional science, portrays the discrimination and injustices inflicted by the mainstream Medical professionals in the US.

Portraying the achievements of the Indian American physicians, Ajay spoke of the many, who lead the cutting-edge research and pioneer modern medical technology to save the lives of critically ill patients around the world, showing to the world, how through hard work, dedication and vision, they have earned a name for themselves as “healers of the world.”

Through the lens of AAPI and its remarkable growth in the past 40 years, Ajay tried to portray how the Indian-American physicians have gone beyond their call of duty to meet the diverse needs of the larger American community, by dedicating their time, resources and skills during national disasters and family crises.

Describing the many contributions of Indian American physicians to India and the United States, Ajay said, “Indian Americans currently are less than 2% but the make up nearly 10% of total physicians in the US and they treat and provide healthcare to every 7th patient in the United States.” He also shared about the numerous initiatives in India, through the annual Global Health Care Summit, Tele-health, sending medical equipment to India, education to their counter parts in India and close collaborations with the state and federal government, Indian Medical Association and several Indian Non Profits, providing healthcare to rural areas across India. Their contributions to the US, to India and to the entire world is priceless, he said, as “they have made their mark in institutions from Harvard Medical School to Memorial Sloane Kettering Cancer Center to the Mayo Medical Center.”