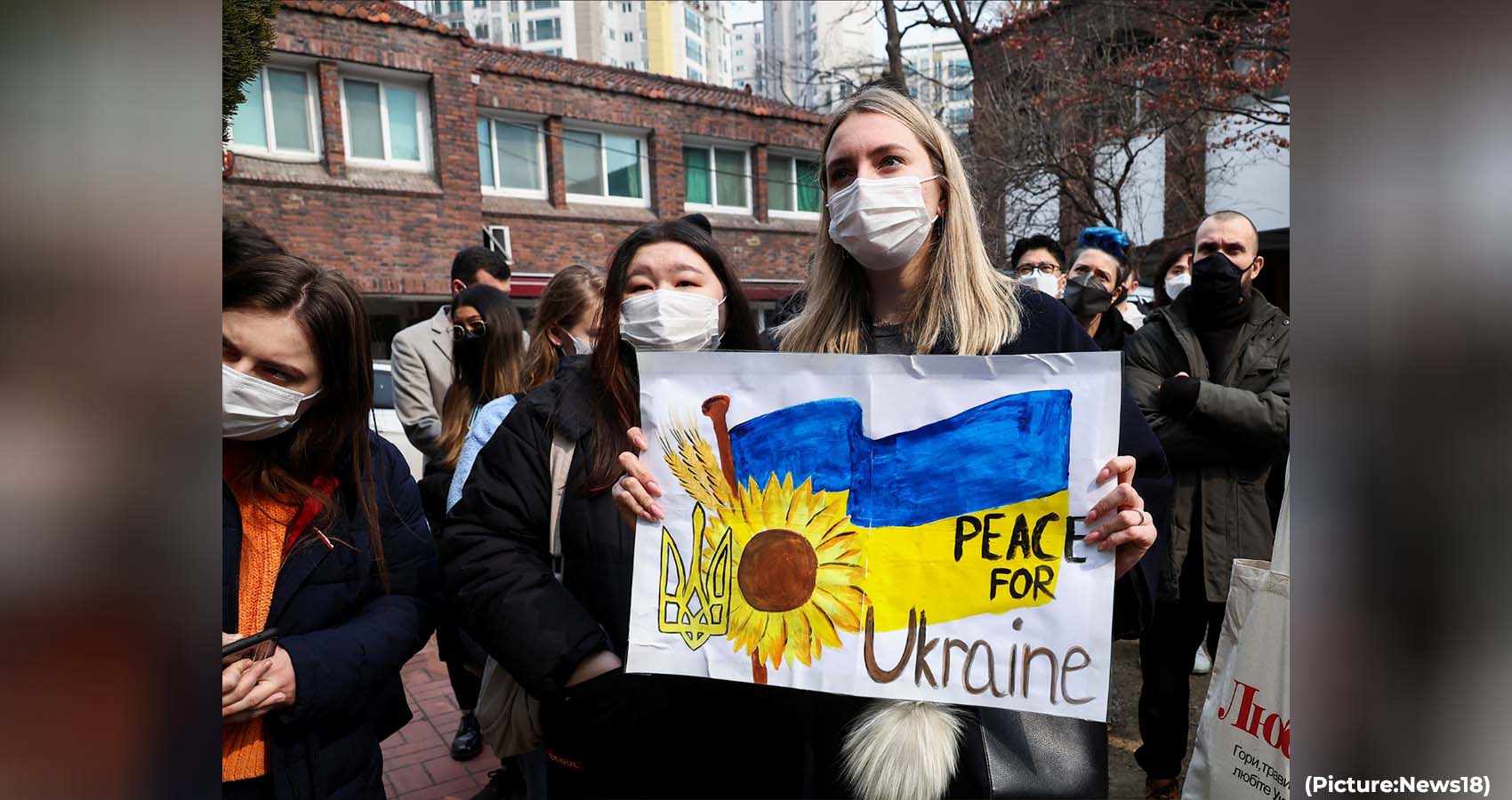 Russia’s invasion of Ukraine has led to a dramatic shift in American public opinion: 70% of Americans now consider Russia an enemy of the United States, up from 41% in January. And on this topic, Democrats and Republicans largely agree, with 72% of Democrats and 69% of Republicans describing Russia as an enemy.

A new Pew Research Center survey, conducted March 21-27, finds that just 7% of U.S. adults have an overall favorable opinion of Russia. Only 6% express confidence in its leader, President Vladimir Putin. In contrast, 72% have confidence in Ukrainian President Volodymyr Zelenskyy.

The ongoing war has brought renewed attention to NATO. Ukraine is not a NATO member, but it borders several member states, and NATO leaders have worked together in recent weeks to coordinate their responses to the crisis. Attitudes toward the alliance have grown more positive since Russia’s invasion: 67% express a favorable opinion of the organization, up from 61% in 2021. Meanwhile, 69% say the U.S. benefits a great deal or a fair amount from being a NATO member.

While both Democrats and Republicans (including those who lean to each party) hold largely positive views about NATO and U.S. membership in the organization, Democrats are consistently more positive, especially liberal Democrats. For instance, 85% of liberal Democrats think the U.S. benefits a great deal or a fair amount from NATO membership; among conservative Republicans, only 51% hold this view.

Still, partisan differences over NATO have shrunk somewhat over the past year. The share of Democrats and Democratic leaners with a favorable overall opinion of NATO has held steady at nearly eight-in-ten, but among Republicans and GOP leaners, positive views have increased from 44% in spring 2021 to 55% today.

The partisan gap on Russia favorability has also decreased. In 2020 – the last time this question was asked – there was a 17 percentage point difference between the share of Democrats with a very unfavorable opinion of Russia and the share of Republicans with that view; now the gap is only 5 points.

These are among the key findings of a new survey conducted by Pew Research Center on the Center’s nationally representative American Trends Panel among 3,581 adults from March 21 to 27, 2022.

Most Americans have a very unfavorable opinion of Russia

Public opinion of Russia is overwhelmingly negative: 92% of Americans say they have an unfavorable view of the country, including 69% who have a very unfavorable view. Since the last time this question was asked on Pew Research Center’s online panel in 2020, almost two years prior to Russia’s recent invasion of Ukraine, this strongly negative sentiment has increased by 28 percentage points.

Before switching to online surveys, Pew Research Center tracked Americans’ ratings of Russia in phone surveys between 2007 and 2020. In that time, assessments of Russia were never very positive, but they turned sharply negative in the spring of 2014, immediately following Russia’s annexation of Crimea, which few countries have recognized – and never recovered. 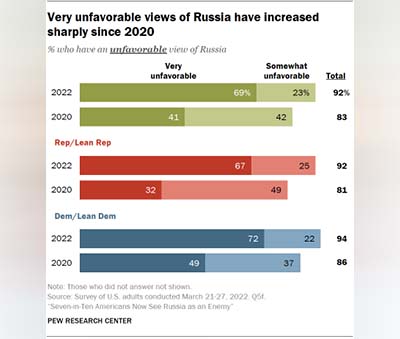 Americans ages 65 and older (83%) are much more likely than adults under 30 (55%) to have a very unfavorable view of Russia.

A large majority of Americans now see Russia as an enemy

Changes in overall views of Russia have come alongside changes in how Americans perceive relations between the two countries. Just two months ago, Americans were more likely to describe Russia as a competitor of the U.S. rather than its enemy (49% vs. 41% at the time). Now, Americans overwhelmingly call Russia an enemy: 70% say so, with just 24% preferring to call Russia a competitor of the U.S. Merely 3% of Americans see Russia as a partner, down from 7% two months ago.

While broad cross-sections of Americans primarily see Russia as the United States’ enemy, those ages 65 and older are especially likely to hold this view, with 83% saying so. And while a majority of the youngest adults polled agree that Russia is an enemy (59%), they are far more likely than older adults to label Russia as a competitor.

More educated Americans are also particularly likely to name Russia an enemy – 77% of those with a postgraduate degree say this, while roughly two-thirds of both those with some college education and those with a high school degree or less education say the same.

While Democrats and Republicans largely agree that Russia is an enemy, there are some differences between partisan and ideological camps. Moderate and liberal Republicans are the least likely to name Russia an enemy (63% say this), while liberal Democrats are the most likely (78%).

Perception of Russia as a major threat at all-time high

With most Americans viewing Russia as an enemy, the share who believe that Russia is a threat to the U.S. is higher now than it has ever been since the Center first began polling on this topic in 2008. Overall, 64% of Americans say that Russia’s power and influence is a major threat to their country, 30% say it is a minor threat and only 5% say Russia is not a threat.

Mirroring overall views of Russia, Americans became more wary of the country in 2014, when just over half said it was a major threat to the U.S. At that time and in 2016, Republicans were more likely than Democrats to be concerned. This partisan difference both widened and flipped in following years, however, with Democrats much more likely than Republicans to view Russia as a major threat in each survey between 2017 to 2020. Since then, the share of Republicans who see Russia as a threat has increased, narrowing the partisan gap.

Though views of Russia as a major threat have shifted somewhat over time, the share of Americans who say Russia is not a threat to U.S. interests has never been higher than 10%.

Majorities of adults in all age groups see Russia as a significant threat, but this view is even more common among adults ages 65 and older (70% vs. 57% among those ages 18 to 29).

As NATO faces increased scrutiny in light of Russia’s invasion of Ukraine, the political and military alliance is seen in a positive light by most Americans. Two-thirds have a favorable opinion of NATO. This marks a significant increase from the roughly six-in-ten who said the same of the organization in 2020 and 2021.

Prior to 2020, U.S. opinion of NATO was somewhat mixed. Roughly half or more of Americans expressed a favorable view of the organization, with opinion ranging from 49% in 2013 and 2015 to 64% in 2018. However, these figures are from phone surveys and are not directly comparable to more recent online American Trends Panel data.

There are notable differences within each partisan coalition: Liberal Democrats are somewhat more likely to hold a favorable opinion of the alliance than conservative or moderate Democrats (83% vs. 75%, respectively). Among Republicans, those who describe their political views as moderate or liberal are more positive about NATO than conservatives (61% vs. 53%, respectively). 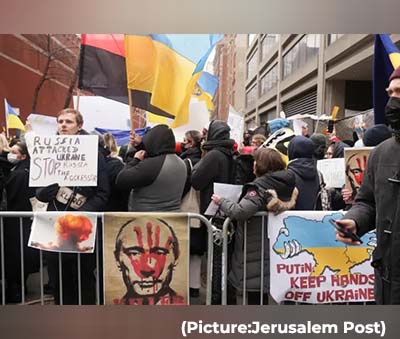 Americans of all ages tend to have favorable opinions of NATO overall, but those ages 65 and older are more likely to hold a favorable view of NATO than younger adults. Roughly three-quarters (73%) of older Americans have a positive opinion of the organization, compared with 64% of those ages 18 to 29. Eight-in-ten of those with a postgraduate degree express a favorable opinion of NATO – significantly more than the share with a bachelor’s degree (73%), some college (64%) or a high school degree or less (59%).

The degree to which U.S. adults pay attention to world affairs impacts NATO favorability. Those who are interested in foreign policy (71%) are more likely to express a positive view than those who are not (56%).

Democrats and Democratic-leaning independents are more likely than Republicans and Republican leaners to believe the U.S. benefits from belonging to the alliance. Roughly eight-in-ten Democrats (82%) express this opinion, compared with 55% of Republicans who say the same.

Age and education impact the way NATO membership is perceived. Older Americans (those ages 65 and older) are more likely than younger adults to believe the U.S. benefits from being a member of NATO. About three-quarters of those 65 and older (77%) hold this view, compared with 69% of those ages 18 to 29. And 79% of those with a postgraduate degree are positive about NATO membership – significantly more than in any other education group.

Interest in international affairs is also linked to support for NATO membership. U.S. adults who say they are interested in keeping up to date on foreign affairs are more likely than those who are not to believe the U.S. benefits from membership in NATO (72% vs. 64%, respectively). Similarly, those who follow international news very or somewhat closely are more likely to have a favorable view of U.S. NATO membership than those who do not (72% vs. 66%, respectively).