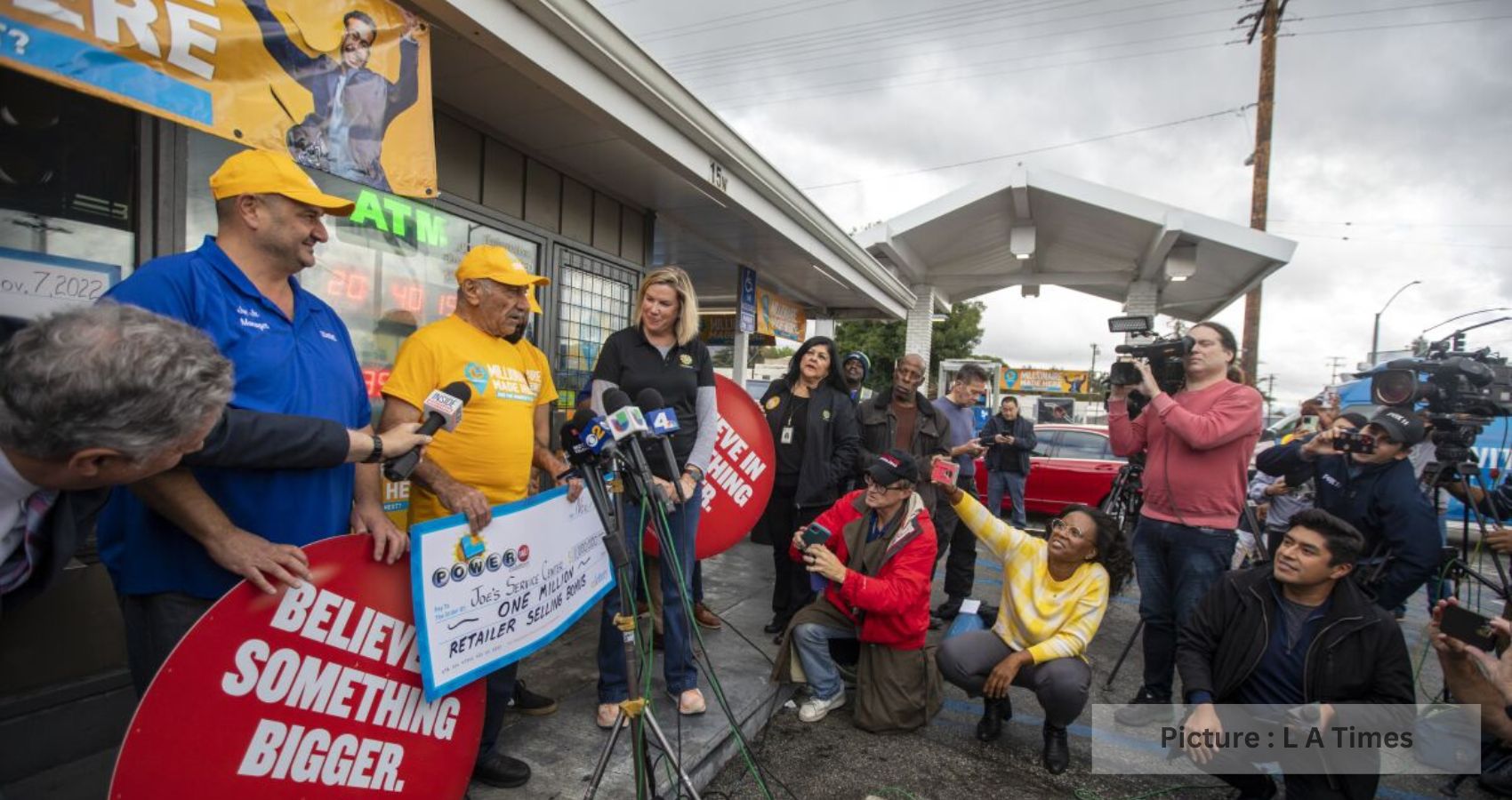 The ticket was sold at a Joe’s Service Center, the California Lottery said on Twitter. Results posted to Powerball.com similarly said there was one winner who matched all six numbers in California – the odds of which were 1 in 292.2 million, according to the Multi-State Lottery Association.

The winning numbers, which were announced Tuesday morning after Monday night’s drawing was delayed, were 10-33-41-47-56 and the Powerball was 10, according to the association.

The odds of winning the jackpot in Monday’s draw are one in 292.2 million, according to Powerball. The premier lottery game has had no winner in more than three months after 40 consecutive drawings.

Here is what you need to know about the lottery and its big prize.

The previous world-record jackpot was set in 2016, when $1.59bn was split between three Powerball players.

“Like the rest of America, and the world, I think we’re all eager to find out when this historic jackpot will eventually be won,” Drew Svitko, the chair of the Powerball Product Group, said in a statement.

Only one other Powerball jackpot reached 41 consecutive drawings. The 2021 drawing ended with a nearly $700m winner in California.

How do you play Powerball?

Powerball tickets cost $2 to buy, and a winner has the option to choose a lump sum payment, which is currently estimated at $929. Winners can also choose to receive the full amount in an annuity paid over 29 years, but almost all winners opt for the upfront cash option.

The game, which began in 1992, is played in 45 of the 50 US states, the capital city of Washington, and in the US territories of Puerto Rico and the Virgin Islands.

A ticket must match all six numbers drawn to score the jackpot. If multiple winners select the same combination of numbers in the draw, they will equally share the jackpot.

According to BBC, the jackpot was last won on August 3rd, when the owner of the winning ticket opted for a lump sum payment of $206.9m. In July, a “Mega Millions” ticket sold in Illinois won $1.34bn.

Players have to be at least 18 years old, but some states have set the age limit at 21. Some states also allow winners to remain anonymous.

Why is there such a big jackpot?

This record-breaking jackpot is being attributed in part to changes the lottery made in 2015. To boost sales, it made smaller prizes easier to win – but the jackpot harder.

It tweaked the game, notably including having players choose five numbers from one to 69 instead of from one to 59 under the previous rules.

Players also select the Powerball – their sixth number – from one to 26, instead of the previous one to 35 .

That increased the odds for the grand prize from one in 175.2 million to the current 1 in 292.2 million.

It’s not the first time to lottery the game rules were adjusted – it has made regular changes in its 30-year history, and recently added the Monday night draw.

Can Powerball be played outside the US?

Powerball tickets can be purchased from abroad online. Participants do not need to be US citizens nor residents.

Winnings, however, need to be claimed in the state to which a ticket belongs.

For US residents, this means that those living in states that don’t participate in the Powerball would need to travel to buy a ticket and claim winnings.

Similar rules are in place for other lottery games.

In 2015, a 37-year old Iraqi man from Baghdad won a $6.4m (£5.5m) “Megabucks” jackpot in Oregon after purchasing the ticket through a Malta-based website.

Lottery winners have also been reported in a number of other countries, including Australia and El Salvador.

Powerball is coordinated by the Multi-State Lottery Association (MUSL), a US non-profit comprised of 38 state lotteries from across the US, Washington DC, Puerto Rico and the US Virgin Islands. It was formed in 1987 and launched its first game – Lotto America – the following year.

The organisation provides a number of services to its constituent members, such as game development, central accounting and the actual conduct of lottery drawings.

Money from tickets sales goes both towards the prize money and the rest to the government-run state lotteries that participate in Powerball, as well as to retailer commissions.

According to the North American Association of State and Provincial Lotteries, US lottery sales totalled over $91bn in the 2019 fiscal year.