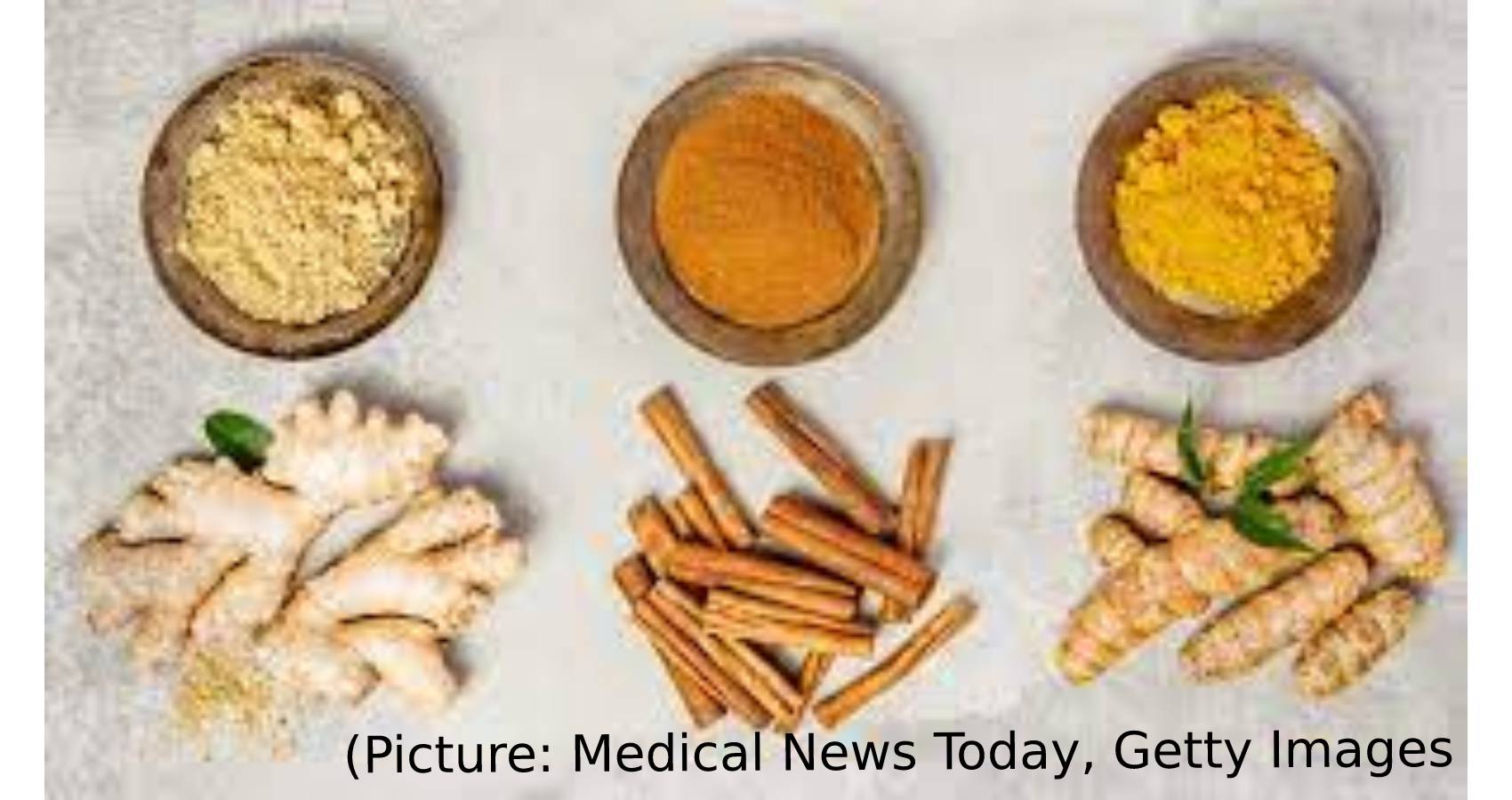 There are several herbs and spices with multiple potential health benefits, such as those with anti-inflammatory properties, cognitive boosters, and some that may even aid in fighting cancer, to name just a few. 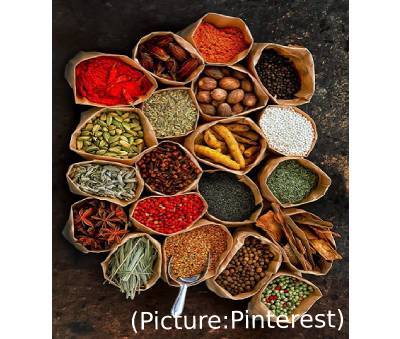 Some of these herbs and spices include turmeric, peppermint, ginger, and many more. Long before modern medicine, the ancient Greeks used a variety of spices and herbs for their healing properties. Hippocrates (460-377 BCE) used saffron, cinnamon, thyme, coriander, and other plants as treatments, many of which people still use today as holistic remedies for fevers, aches and pains, and other ailments.While there is little to no scientific evidence that they directly cure serious diseases, research increasingly shows that many herbs and spices possessTrusted Source properties that may help mitigate certain symptoms. This article will explore the health benefits of 10 herbs and spices, including the aforementioned turmeric, peppermint, ginger, and more.

Turmeric, sometimes called curcumin, is one of the most popular spices used today for cooking and health benefits alike. Laboratory studies have shown that turmeric has some anti-inflammatory, antioxidant, antibacterial, antiviral, and antiparasitic benefits. Of all of these, research shows that turmeric is most effective for its anti-inflammatory and antioxidant properties.

As a chain-breaking antioxidant and anti-inflammatory spice, turmeric improves oxidative stressTrusted Source with its ability to scavenge toxic free radicals in the body. Free radicals are tissue-damaging molecules with an uneven number of electrons that can be catalysts for chronic diseasesTrusted Source, such as cardiovascular disease and cancer. With its high antioxidant content, turmeric can work to reduce the risk of free radicals forming and reduce the effects of stress on the body.

People have been using ginger for thousands of years as a remedy for nausea and gastrointestinal issues. Today, people primarily use the ginger root as a spice, or as a supplement to treat digestive problems. Closely related to turmeric, ginger also contains anti-inflammatory propertiesTrusted Source and a very high level of total antioxidants. Only pomegranates and certain types of berries contain more. As an antinausea agent, several controlled studies have proven that ginger is effective as an antiemeticTrusted Source. People can use it for seasickness, motion sickness, and morning sickness.

Some studiesTrusted Source have demonstrated that ginger may have anticancer effects. This is largely due to ginger’s high antioxidant levels. It can also slow down cells reproducing, cause cells to stop dividing, and stop certain activator proteins and signaling pathways that contribute to cancer. That said, most of these studies took place in a lab, and more human clinical trials must take place.

Cumin is a popular cooking spice used for its aromatic effects. StudiesTrusted Source show that it is also beneficial for weight loss, cholesterol, stress management, and more. It also has high antioxidant potentialTrusted Source. Research also shows that cumin is an antidiabetic. A group of 80 people took an Ayurvedicformulation containing cumin over a period of 24 weeks, and their postprandial blood sugar was significantly reduced.

An extremely popular herb that is commonly used as a flavoring agent, peppermint is native to Europe and Asia. In these regions, people used it before the advent of modern medicine for its cooling effects, antibacterial properties, and to improve digestive health.

Research shows that as a holistic remedy, peppermint is also effective in improving cardiovascular (heart) and pulmonary (lung) health by acting as a bronchodilator. Bronchodilators work by widening air passages (bronchioles) in the lungs. By inhaling the smell of peppermint, a person will also increase their nasal air force, in turn supplying more air to the lungs. In addition, some studies also show that peppermint is an effective muscle relaxer thanks to its cooling menthol compound, which is why menthol is often an active ingredient in ointments and creams that target muscle pain.

Derived from the coneflower plant, echinacea is a supplement that is best known for targeting the immune system and helping prevent colds. While research has yet to prove that the herb can fight viruses, many use echinacea to support the treatment of conditions such asTrusted Source:

Echinacea treatments for these illnesses are not proven to be effective. The majority of studies show otherwise or are inconclusive at best. There may be a loose correlationTrusted Source between taking echinacea and strengthening the immune system, but much of the evidence for the herb’s efficacy is anecdotal.

Ancient civilizations have used cinnamon since 2,800 BCE for anointing, embalming, and treating ailments. Though not as widely used for its therapeutic properties as it was thousands of years ago, cinnamon still provides myriad health benefits as an antimicrobial, antioxidant, anti-inflammatory, antidiabetic, and anticarcinogenic spice.

A 2015 reviewTrusted Source shows that cinnamon may reduce blood sugar levels. Its role in regulating glucose in the body has been suggested in many small randomized control trials, though the results have not been significant enough to prove conclusive.

Cinnamon also has cognitive enhancement effects, and researchers have sought to determine whether the spice could be an effective treatment for Alzheimer’s disease. In particular, scientists have studied CEppt (an extract found in cinnamon bark) to ascertain whether it could help prevent the symptoms of Alzheimer’s from progressing. When mice ate this extract, it greatly improved their cognitive abilityTrusted Source.

2015 researchTrusted Source suggests that capsaicin, the phytochemical that makes chili powder spicy, may play an important role in regulating heart and metabolic health.

When people consume chili powder, the spice triggers beneficial protein changes in the body that are conducive to weight loss. But researchers do not fully understand the mechanism of how this works. People who participated in a studyTrusted Source where they consumed moderate amounts of chili over a 12-week period experienced weight loss results, which was triggered by chili’s impact on the body to better control insulin, among other therapeutic effects. In another studyTrusted Source, researchers observed that regular consumption of chili also significantly reduced abdominal adipose tissue (fat) levels and reduced appetite and energy intake.

When it comes to cardiovascular benefits, recent research provided by the American Heart Association found that those who regularly consume chili powder may reduce their risk for developing heart disease mortality by 26%. Additionally, frequent chili consumption correlates with a 25% reduction in mortality from any cause and 23% fewer cancer deaths.

Thanks to its anti-inflammatory properties, chili powder could also be effectiveTrusted Source for supporting arthritis treatments, as well as for alleviating muscle and joint inflammation.

Parsley is an herb that originated from the Mediterranean region. Many have used it through the years for both culinary flavoring and therapeutic treatment for a range of health conditions, including high blood pressure and allergies. This herb is full of antioxidantsTrusted Source, carotenoids, and other beneficial vitamins that support a healthy body and immune system. Among these is vitamin K, an essential nutrient for bone health.

Another herb that is prevalent in the Mediterranean diet is oregano, which many use not only as a flavor enhancer for food but as an aromatic oil and supplement. The herb’s antioxidants contribute to its powerful taste and smell, and may also provide benefitsTrusted Source such as:

Oregano as a standalone herb cannot singlehandedly produce these results. But people may use it for its antioxidative properties that are beneficial for many health conditions.

Cardamom is yet another spice that provides a wide range of potential health benefits. Coming from the seeds of plants that belong to the ginger family, people often consume cardamom in teas, such as chai tea, as well as some coffee, desserts, and even savory dishes.

Some of the conditions that researchTrusted Source shows cardamom may treat are:

Herbs and spices make flavorful additions to meals, but are also powerhouses for essential nutrients that greatly benefit the body. People may experience some benefits or health improvements from incorporating herbs and spices into their diet, but should not depend upon them solely for full treatment of conditions.Those with serious health conditions should talk with a doctor to discuss the best course of treatment for them.