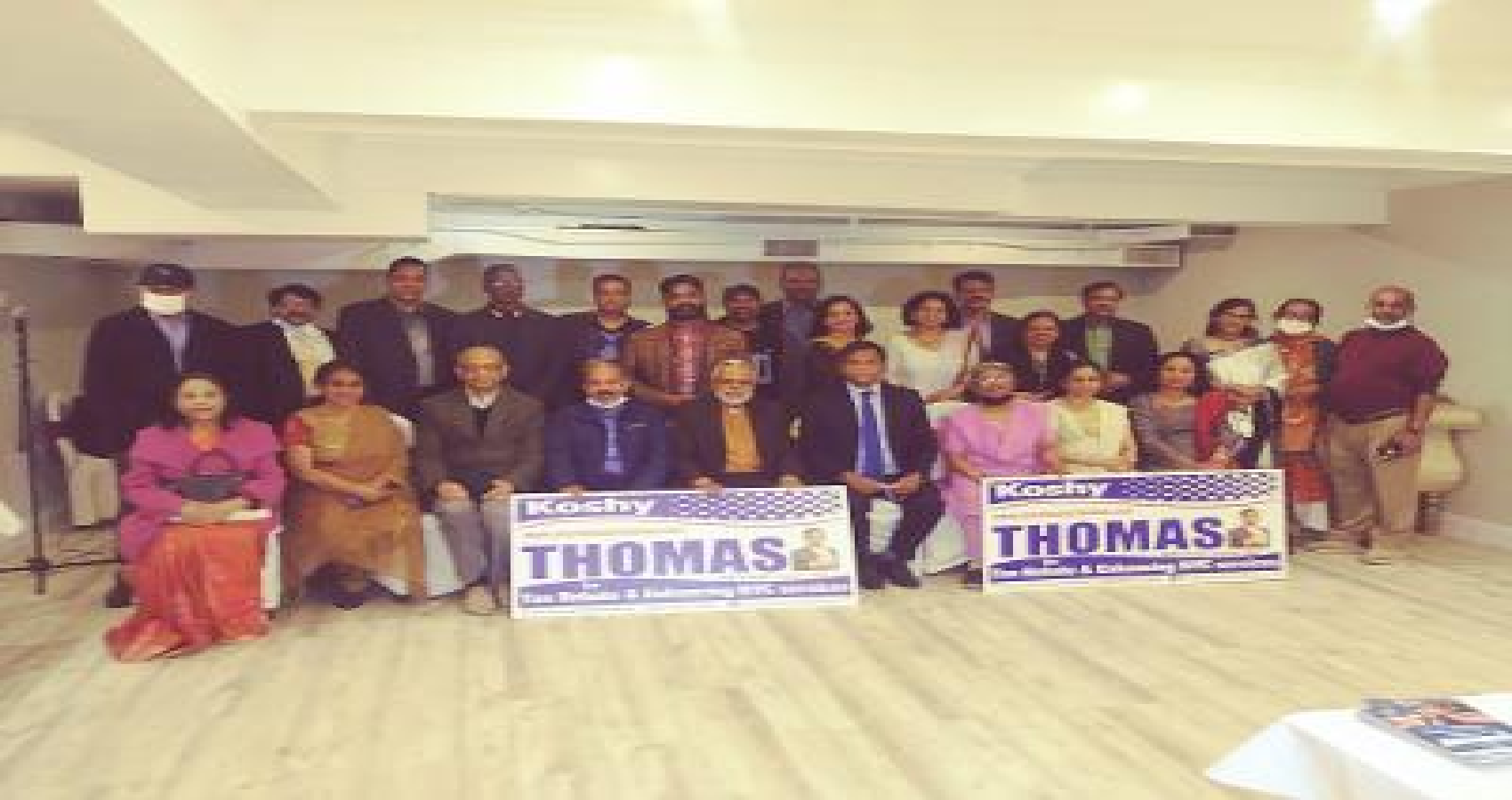 Koshy Thomas, a strong and committed Indian American leader’s candidacy is gaining momentum as the Asian Americans Queens community gathered to throw their full support to him in his efforts to become the first New York City Council member in the upcoming Democratic party Primaries on June 22nd. The meeting took place in Santoor Restaurant in Floral Park, NY and was attended by community leaders and activists. The meeting was convened in light of increasing endorsements and enthusiastic reception from voters for his candidacy. The challenge for Koshy Thomas is to translate the newly created enthusiasm into votes in the days ahead!

Koshy Thomas, in his speech, talked about his involvement with the community for the last 27 years and said he knows the community well and their concerns and aspirations. “ I consider this upcoming election as a great opportunity to serve the people in the District. There is so much to be done in terms of helping the community and the small business in these COVID times. “If you walk around this District, you may see so many small businesses are closing down, and they are truly hurting. They need help with tax breaks and other financial incentives to survive in this economic downturn”, he said.

Dr. Annie Paul, Legislator from Rockland county, called for unity among us and encouraged everyone present at the meeting to get involved.  “when I ran for the election, people from all over the country extended help. I am expecting the same for Koshy’s campaign. This District has so many Asian Indians, and if we come together, victory is certain”. She said.  She also offered whatever assistance in this effort and urged the community to join her in this great endeavor to elect the first Asian Indian to the NYC Council. 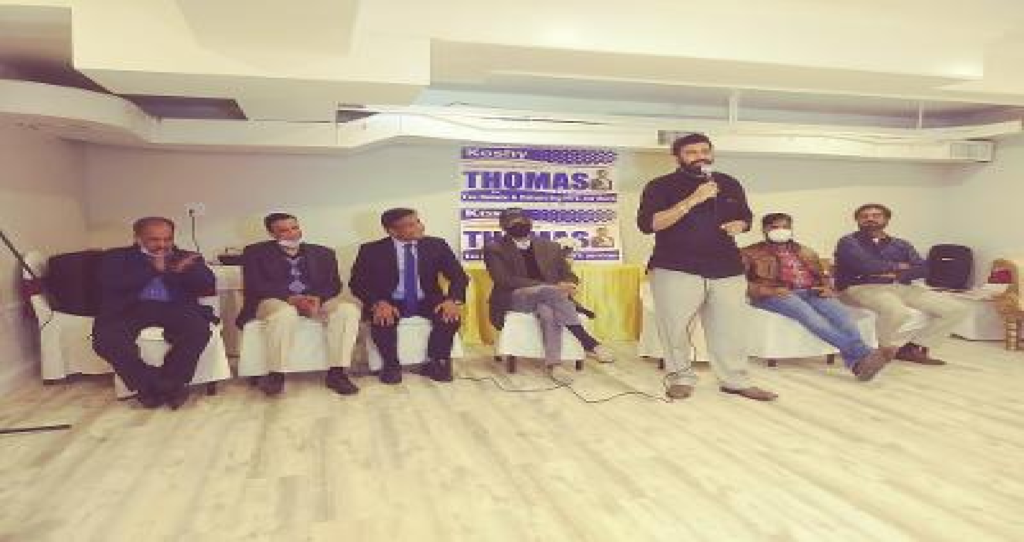 Aniayan George, President of FOMAA (Federation Of Malayalee Associations of Americas), characterized Koshy Thomas as someone who identifies with the community regardless of their background and someone who has the energy, willingness, and capacity to elevate his contributions further as an NYC Councilman. “ I believe Koshy Thomas can win this election, and he will be our first Asian Indian representation in the City Council,” he added.

Father John Thomas, Vicar of the Orthodox Church in Jackson Heights, reminded the people of our duty as responsible citizens to participate in the elections and especially to vote.  He cited “the issue of non-participation in voting as one of the serious concerns involving our community.” He also urged the participants to discharge our constitutional responsibility as new citizens of this great country. Mr. Denzel George, President of the North Hempstead Malayalee Association, reiterated the basic principle of faith and said, ‘we ought to believe in the candidacy of Koshy as the first step towards winning this great challenge. If we do, it is achievable ”.

George Abraham, Vice-Chairman of the Indian overseas Congress, encouraged the community to take advantage of this historic opportunity to place Koshy Thomas in the City Council. He lauded him for his work in the community in the last several decades as an indication of his commitment and dedication to serving the people. ‘Undoubtedly, for anyone to succeed in an election, it requires financial resources and manpower. There is no shortage of that in our community; the question is whether we are willing to help in the next two months to attain our goal,” he asked.

Robin Singh, representing the Caribbean community, said, “Koshy’s candidacy is appealing to all  sectors of the community, and having known him over the years, I wholeheartedly endorse his candidacy and assure you of our support for his campaign.” 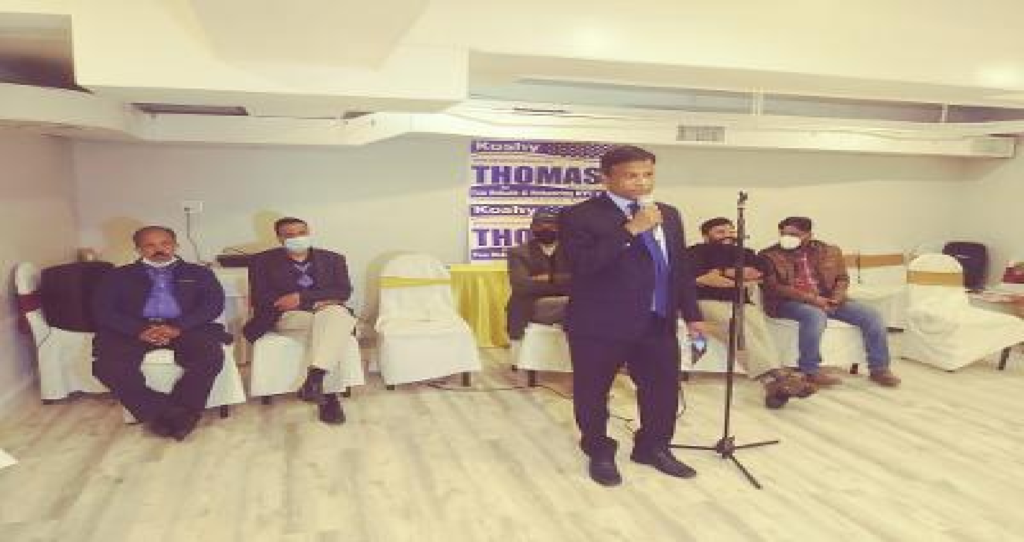 V.M. Chacko, a leading community activist in Queens over four decades, pointed out the potential the community has in this upcoming election and said, “this is not the time to be lackadaisical, and please get involved for the sake of the safety and wellbeing of our community.” Mr. V. Abraham (Raju) described the success the campaign has had in terms of timely submission of the nomination forms and increased awareness of Koshy’s candidacy across the District. Mr. George Parampil, who has been urging Koshy Thomas to run over the years, applauded his dedication to the community and threw his full support behind him.

In his reponse, Koshy Tomas told the leaders of the community, introducing himself, said: “Hello, my name is Koshy O. Thomas, as you know, I am running for New York City Council from District 23, Queens, NY. I am a husband, father, a resident of Queens and Equal Opportunity for ALL Activist for over 27 years, small business associate, and with your support, I will be working efficiently to rebuild our district and neighborhood. “

Enumerating his key ideas and vision, Koshy Thomas said: “Along while improving healthcare, housing, education, employee protection, public transit and justice for all, I will fight to implement a tax rebate of a minimum of THOUSAND DOLLARS for all homeowners and NYC Residents and a TWO THOUSAND DOLLAR TAX REBATE for all small business owners and those who are self-employed. We will accomplish this by enacting stricter enforcement on tax evading large corporations by enforcing them to pay their fair share. We will continue to fight for those who have lost their loved ones, for those who are still suffering, and we look on to a future of hope and prosperity. The journey may not be easy, but the fight is worth it for a better tomorrow. To join or host our campaign via virtual media or to share your concerns call/text me at 347-867-1200. Let’s Unite for Peace and Prosperity.”