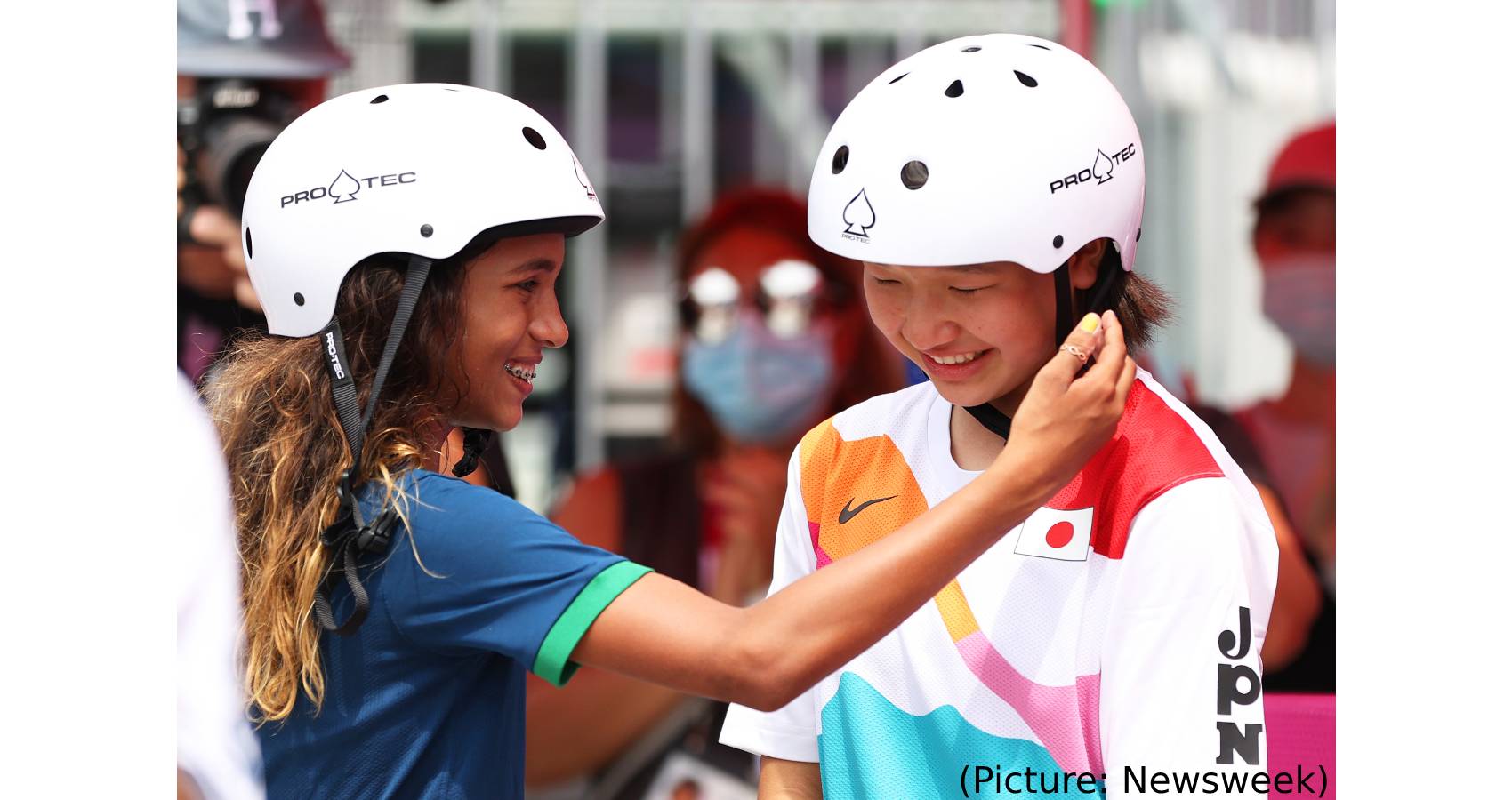 Japan’s MomijiNishiya, 13, made history on Monday when she took home the first women’s street skateboarding Olympic gold medal at the Tokyo 2020 Games. Standing next to her on the Olympic podium was Rayssa Leal from Brazil, also 13, who earned silver in the event. Japanese skater Funa Nakayama, 16, took bronze. Nishiya’s win comes one day after 22-year-old Japanese skater YutoHorigome won gold in the men’s event, and it cements Japan’s status as a skateboarding powerhouse. The women’s skateboarding final was a huge moment for these Games—as some of the Olympics’ youngest competitors offered up impressive tricks and brutal wipeouts on an international stage.

Half of the skaters in the finals lineup were under 18, and in Tokyo’s scorching heat, they were determined to land their best tricks. They managed to fill the mostly empty skatepark with joy as hip-hop thumped in the background. The skaters were generous with hugs and applause after impressive runs. MargielynDidal of the Philippines gave Japan’s Aori Nishimura fist pumps. Nakayama and Nishiya chatted with each other while waiting for their turns. Leal would sometimes skate near the spectator area, where the press and athletes were sitting to celebrate her high scores.

The few spectators at the Ariake Urban Sports Park witnessed some big surprises on Monday. World No. 1-ranked Pamela Rosa, 22, was seen as Brazil’s most likely medal hopeful, but she didn’t even make it to the final. Nishimura, 19, the No. 3-ranked female street skateboarder after claiming a world title in June at the Street Skateboarding World Championships, came in eighth after falling several times.

After winning gold, Nishiya was asked what she wanted to tell young skaters. “Skateboarding is fun and interesting, I hope everyone can give it a try,” she told TIME. And this young field is already offering powerful inspiration for a new generation of skaters. Outside of Ariake Urban Sports Park, 9-year-old Keito Ota and 8-year-old Ayane Nakamura were eagerly waiting to catch a glimpse of the newly minted Japanese medalists. The two friends had started skateboarding about a year ago and arrived at the park wearing Team Japan skateboarding shirts. Every time a bus left the venue, they would press themselves against the metal fences holding pieces of paper that said “Thank you for your hard work” and “Congratulations on your gold medal.”

Ota said he was already a fan of Horigome as well as Nishimura. But now he’s adding Nishiya and Nakayama to his list of favorite skateboarders. “I am their fan now,” Ota said as he slid around on his skateboard. In August, Ota will enter his first competition at a local skateboarding student cup. Nishiya, 13 years and 330 days, is Japan’s youngest ever gold medalist, and one of the youngest in Olympics history. That record, though, goes to American diver Marjorie Gestring, who took the gold medal at the 1936 Berlin Games at the age of 13 years and 267 days. Leal, age 13 years and 203 days, would have set a new record had she finished first.

Japan’s big wins in the first two skateboarding events should hopefully change the nation’s perception about skateboarders and further cultivate its skating culture. Many Japanese still view skateboarding negatively. A “skating-banned” sign hangs just outside the Olympic skating venue in Tokyo. Skateboarders across Japan are likely to have another big moment when the women’s park skateboarding event takes place Aug. 4. Japan’s Misugu Okamoto and Sakura Yosozumi, the world’s two top-ranked female park skaters, are strong contenders. KokonaHiraki, Japan’s youngest Olympian who landed solid attempts at a Dew Tour event in May, could rewrite history at 12 years old. As for Nishiya, who always gets rewards from her mother after competitions, told reporters she now just looks forward to getting yakiniku, Japanese-style grilled meat.