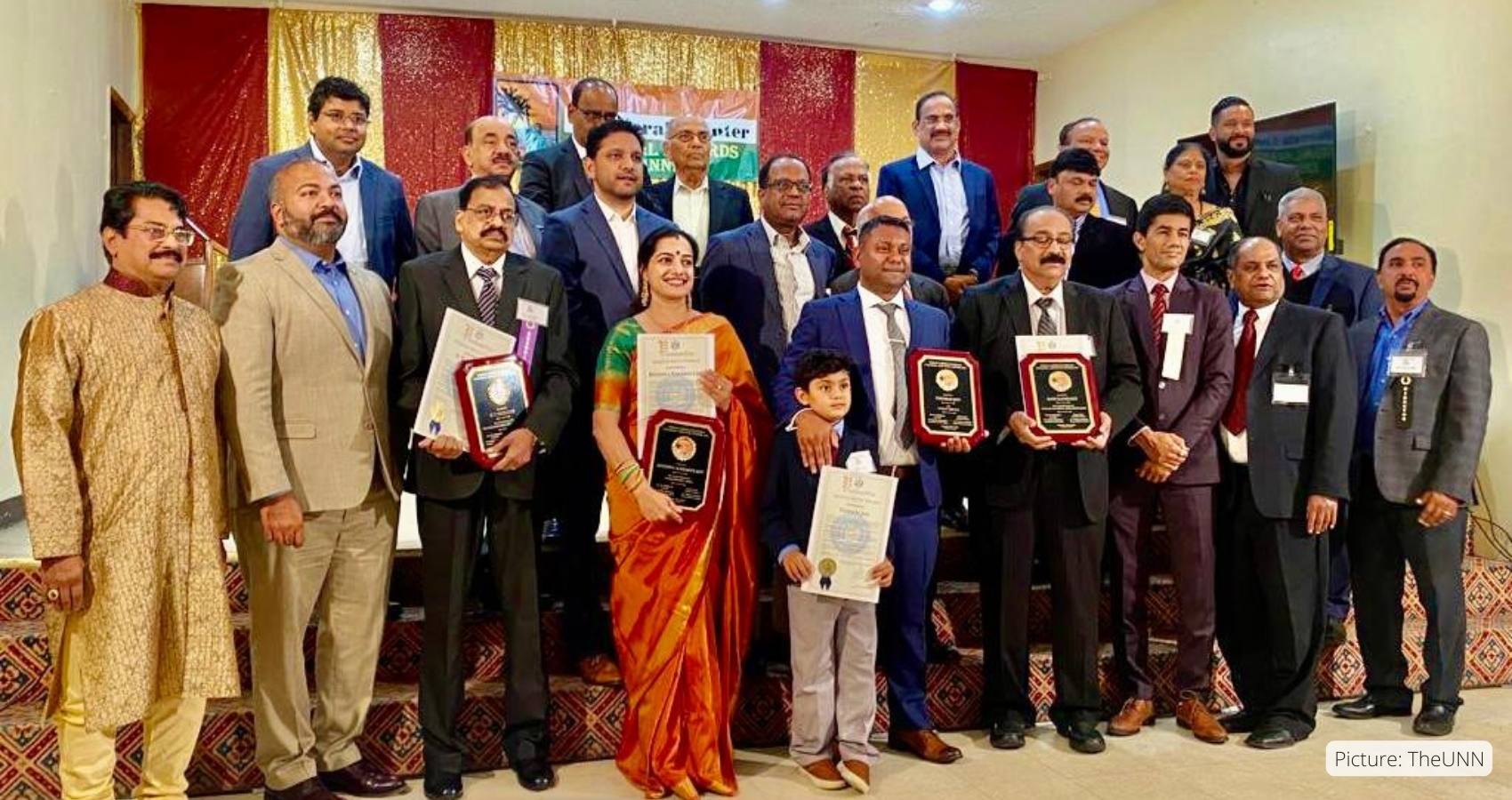 The Kerala Center in New York held its 30th Annual Awards Banquet at the Center’s auditorium in Elmont, NY on Saturday, October 22, 2022.  The Center honored six individuals who made notable contributions in their professions and to the society with their selfless dedication.

This year’s honorees who accepted the awards at the ceremony were: Jose Kaniyaly, Executive Editor and Partner of Kerala Express weekly newspaper, for his contributions to Malayalam Media and Journalism; Thomas Joy, police officer and president of the American Malayalee Law Enforcement United (AMLEU), for Public Service; Bindiya Sabarinath, founder of Mayura School of Arts, for achievements in the category of Performing Arts and P. T. Paulose, for contributions to Pravasi Malayalam Literature. Dr. Javad Hassan, Chairman of NeST Group, who won the award for Corporate Leadership and Dr. Silvester Noronha of MIT, in the category of Applied Science, were unable to attend and accept the awards due to personal circumstances.

The program commenced with the American and Indian National anthems sung by Riya Kootumkal and Bincy Cheripuram. The MC was Mrs. Daisy P. Stephen who then introduced Kerala Center President Alex K. Esthappan, who welcomed everyone and provided a brief description of the activities and goals of the Kerala Center. Indian Consul for Trade and Commerce, Manish Kulhary, was the chief guest of the function. New York Senators Kevin Thomas and Anna Kaplan were present to say felicitations and to present the awards.

The chief guest was introduced by Dr. Thomas Abraham, Chairman of the Trustee Board and Award Committee member. In his remarks, Dr. Abraham talked about the maturing of the Indian community in the last 50 years with our increasing political participation. He called upon the parents to inculcate community service in their children.

Chief Guest, Indian Trade and Commerce Consul Manish Kulhary stated that he had a relationship with Keralites from his childhood as his teachers in his school in Rajasthan were Malayalees.  He praised Kerala for its achievement in education and healthcare, and also praised the Kerala Center for honoring individuals who excelled in their professions and serving the society with dedication.

Dr. Madhu Bhaskaran, the chairman of the Award Committee and Board of Directors, in his speech explained the process of selecting the awardees.

The award for Malayalam Media and Journalism went to Jose Kaniyaly the Executive Editor and Partner of Kerala Express, a weekly Malayalam newspaper published from Chicago, which was founded in 1992.  In his speech, he encouraged associations and its leaders in America to give more recognition to medias and journalists here in conjunction with journalists in India. Kaniyaly was introduced by Christy Jose, youth representative of the Kerala Center, and Consul Kulhary presented the award.

The award for community service went to Thomas Joy, a police officer, a combat veteran of the Iraq war and president of the American Malayalee Law Enforcement United (AMLEU). In his speech, he encouraged our youth to get involved in public service.  Officer Joy was introduced by Samuel Joseph, youth representative of the Kerala Center, and Senator Kevin Thomas presented the award.

The award for performing Arts went to Bindiya Sabarinath, the Artistic Director of the Mayura School of Arts in New Jersey established in 2001. In her speech, Mrs. Sabarinath said that she feels blessed that she was able to teach dance to more than thousand students already using her God given talents.  Bindiya was introduced by Annie Esthappan, youth representative of the Kerala Center, and Trustee Board member G. Mathai presented the award.

The award for contributions to Pravasi Malayalam Literature went to P. T. Paulose, a journalist, freelance writer, theatrical performer and director. In his speech, he said that receiving awards are sweet, but it is sweeter when it was from the Kerala Center which always stood for secularism, humanity and inclusiveness.  Paulose was introduced by James Thomas, youth representatives of the Kerala Center, and J. Mathews, Chief Editor of Janani magazine, presented the award.

In addition to New York senators Thomas and Kaplan, Jose Kadapuram, Director of Kairali TV, USA, made a felicitation speech.  As part of the Award Ceremony, a Souvenir was released by the souvenir committee members Raju Thomas and Abraham Thomas by giving a copy of it to Dr. Theresa Antony.

James Thottam was the chairman of the Award Dinner. Board members Abraham Thomas, Mathew Vazhappally and John Paul coordinated the event.  The MC of the program, Daisy Palliparambil, impressed everybody with her outstanding performance. The songs sung by Bincy Cherian, Indian classical dance performed by Maya Devi of Mayura School of Arts and Brazilian dance performed by Beena made the awards night a more colorful one. Kerala Center Secretary Jimmy John concluded the ceremony with a vote of thanks to the guests, awardees, audience, sponsors and everyone worked so hard to make it a successful event. With dinner, the 2022 Award Night came to the end.