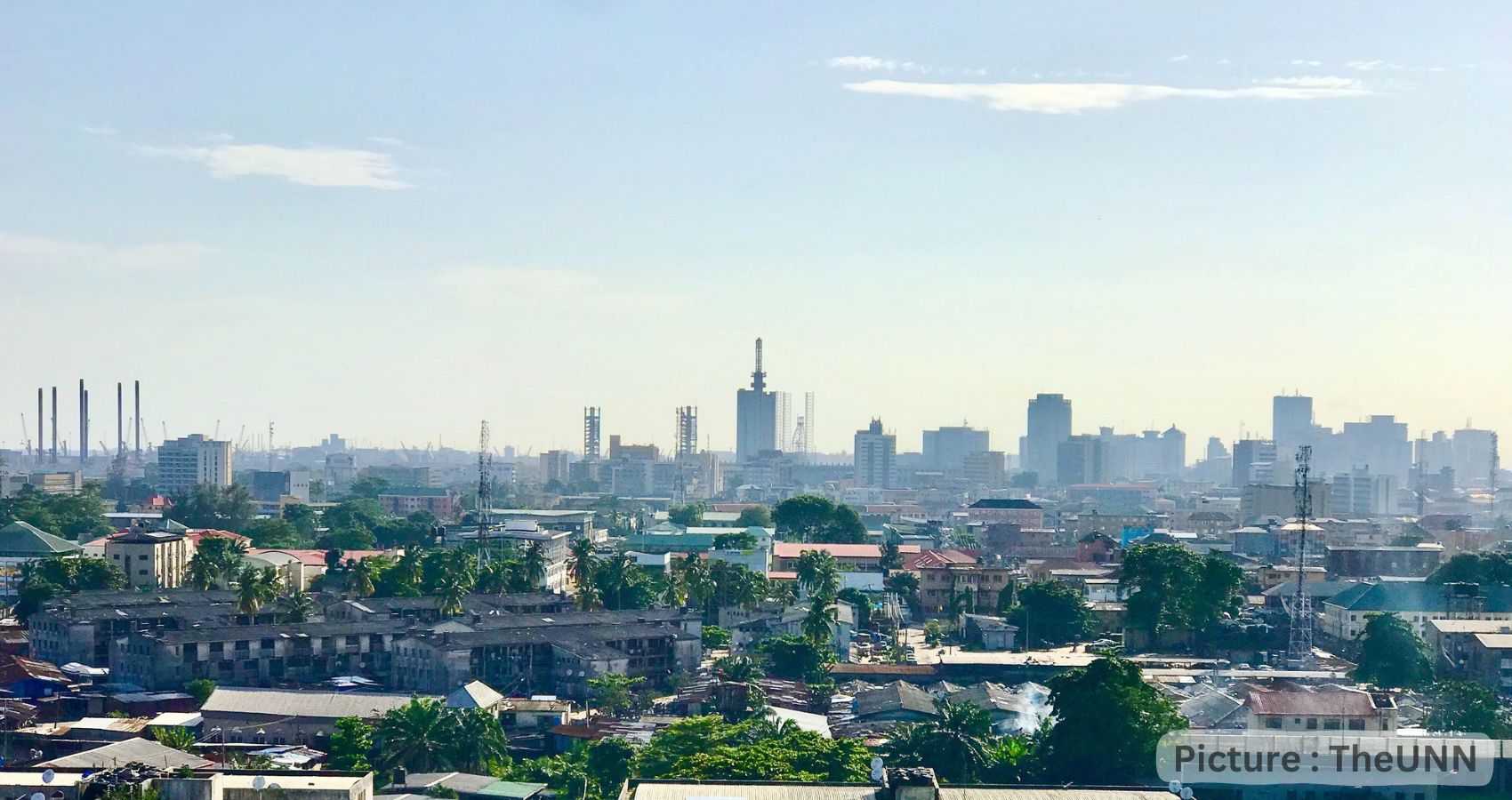 It was the lunch hour, and as always Father had to determine where he was going to sit. The canteen and its tables were as crowded as the halls of the hospital itself. Though the hospital he worked for was private, and therefore modern in comparison to the ones maintained by the government, it was also not particularly big, just two storeys, and gated like any of the other residences on Bourdillon Road.

It had to be that the only table with a single chair available was the one at which Dr White was sitting. Father and Dr White weren’t friends. Father saw Dr White surrounded by the suck-ups he always had around him and knew the last thing he wanted to hear was them spew rants on Nigerian politics and football.

But Dr White saw that Father was standing there idly, not knowing where he could sit to eat, and he patted the plush of the chair next to him. ‘Come. You sit here.’

So Father sat, and had to greet each and every one of them with a little smile and ‘how is everything?’ They reciprocated with smiles but didn’t say much. Now that he was seated, Father let himself become comfortable. He broke his hand into his spiced chicken, mixed a bit of it into his jollof rice, and let the steam stir in his mouth as he fed himself.

The vibe at the table was odd for how these men normally behaved. They were all busy eating quietly, opening up their agidis or sliming up their hands with amala doused in ewedu. Father was used to seeing Dr White and his friends cackling loudly, talking to each other with the sort of camaraderie that he would see among the boys in his days in the village, fondly in arms with each other. It was all so bereft of the charm and pull that Dr White normally brought to the table,  flashing the wide-toothed grin he was infamous for.

Father asked, ‘It is strange. Why is it that you are so quiet today?’

Dr White looked at him, as did all of the other doctors at the table. Father realised that the question he thought he had kept at the back of his head was actually voiced out loud. He felt deeply embarrassed, for he rarely did that. He usually even scolded his wife for being so quick to say things without thinking about whether a person wanted to hear it.

The surprise at the very least was temporary. Dr White noticed he was being engaged, and whenever he was engaged, he was quick. He put on that grin, he smiled also with his eyes. He asked, ‘Abaeze, my friend. It has been long since we have talked. How have you been?’

To be honest, Father did not feel comfortable with the question. This was because he had a lot to say in response, but he didn’t want to share such things to a relative stranger like Dr White. For example, he had a mother out in the mangroves of Delta State, whose back had healed enough so that she could somewhat stand, but walking was difficult. Inflation was a horror, and Father was the only person in his family who earned. Not to mention the crime in Lagos, which affected their suburban house in Banana Island as it did the shanty towns of Ilaje or Agege.

Father doubted that Dr White really wanted to hear his thoughts on any of this. He also had other things on his mind during this fifteen-minute break carved into an otherwise busy day; he was remembering in particular the patient he was in the middle of seeing, a sweet Igbo lady who was developing emphysema. Her lungs were starting to fill with mucus, and it could be fatal given her age. Father was wondering what the best medications would be for her. So Father said, ‘I am doing well, thank you for asking,’ and left it at that, in the hopes that he could eat his chicken and think in peace.

Dr White smiled. Father noticed it was now a quiet smile, with his lips curving upward, rather than his typically wider and aggressive grin. Father was not used to the diffidence. He tried to get back to his meal and his reflections, but he felt unsatisfied in what he had said to the table. It was far too polite, too flavourless.

He wanted to say something in that moment.

What he came up with was quite random.

‘Age is a funny thing. It will do us all in. It is worse than any disease.’

One of the doctors, a bald man with huge glasses, gave a nod. So did another, who had a wide, curly bush of grey hair on his head. The bald doctor said, ‘It is nice to see how technology is advancing. I think people of my grandchildren’s age, they will not know death. They will live infinitely.’

The doctor with the greying bush of hair laughed. ‘Ha-ha. Infinite life. There is not electricity for most of the day. And you are telling me we will have android children. You are watching too many movies, my friend.’

Another doctor said out of the blue, ‘He is watching too much Nollywood, that is it,’ and they all laughed, even Father.

The doctor with the glasses defended himself. ‘There is a lot of precedent you are misunderstanding. You must read more American books to know fully. They are doing a lot to advance technology there. And it will be like anything else. It will come to Nigeria.’

To the rich and powerful, if it does, was what Father thought, but he did not say it out loud. All of them qualified to be in that class, living in the best parts of Lekki and Ikoyi, and not a single person there wanted to be indicted for it.

Another doctor at the table said, ‘With climate change coming as fast as it is, with the inflation killing all of our wallets, I will be surprised if anything lasts another ten years.’

The table grew silent. Something of what he said brought down a dark and pressing spirit. There was a collective sense that the world wasn’t moving in the direction that the people of their class and generation had thought it would. There was a sense that all of their early beliefs in moving upwards and making things as rich and big and fancy as possible for a city like Lagos wasn’t going to provide the comfort they had expected in their later lives.

Father was almost done with his meal, but he was getting curious about something that this conversation reminded him of.

‘Hey, Dr White, let me say something. You have been telling us about all these new gadgets and equipment, you were going to ask the board to give us this, give us that. And we all signed something about it. So now, it has been almost a year, or longer than a year. And I don’t see any new equipment. What is happening?’

Dr White said, with his teeth pinching together, ‘Did you not just listen to everyone?’

Father said, ‘No one said anything about the petition. That is why I am asking.’

Dr White pressed, ‘No, did you hear what they said? There is inflation, there are a lot of problems that are everywhere but also in Nigeria. We do have the generators working every day. But now you are asking if we can have new equipment?’

‘Because you had promised that last year.’

‘Because that was last year, and things are changing.’

That was all fair and well, Father thought, and quite understandable. But what surprised Father was not what Dr White said, but how he was saying it. There was none of his usual charm or charisma. Dr White was speaking directly, and not holding any of his true feelings back. It almost felt like how a steamroller went across freshly melted pavement—the words suavely rolled across their trajectory, and yet they burned on impact. Even the other doctors were looking away. Father got the sense that they were not in the habit of Dr White showing emotion that wasn’t artificially pleasant.

Dr White looked at his tray of bones and napkins, and he stood to throw it away. When he returned, the decorum came back for a moment. He looked at each doctor in the eye, said some words of departure, and summated overall, ‘That was a good chat. I look forward to talking more some other day.’

The doctors gave their nods, said their goodbyes, and continued to talk about the petition even though Dr White had long left, announcing their agreement with him. Not a single one gave Father any more of their time or words. They were not friends, and it had been that way for decades.

Father sensed that something about Dr White was changing. Father had known the man for decades. He was quick to gregariously show off around others, in an effort to feign closeness to them. But this was the first time Father had ever seen Dr White not faking it. Father thought about going up to him after his shift to ask if anything was wrong But of course they weren’t friends. They were barely acquaintances. So what if Dr White was acting differently? It was simply his business, just like Father had his own problems and concerns.

Speaking of, it was getting a little late, wasn’t it? There wasn’t much time left, and he would have to figure out what to do with his patient when he got upstairs. Father scarfed down the rest of his rice and he drank some water so that it would not clog in his belly. He took a minute to remain seated to avoid the gas which came from standing too quickly. He normally would have relished that minute and the calmness that came with it, except when he glanced around the table at the doctors beside him, in their stress-laden faces and tired stares, Father noticed something else which caused him to leave quickly.

It was not only Dr White who was in the process of changing.

(Kiran Bhat is an Indian-American polyglot, traveler, and author. He has been to 149 countries. He is working on using these experiences to create a novel for Planet Earth. To read more, follow me here, or check out my novel’s page, at www.girar.world)