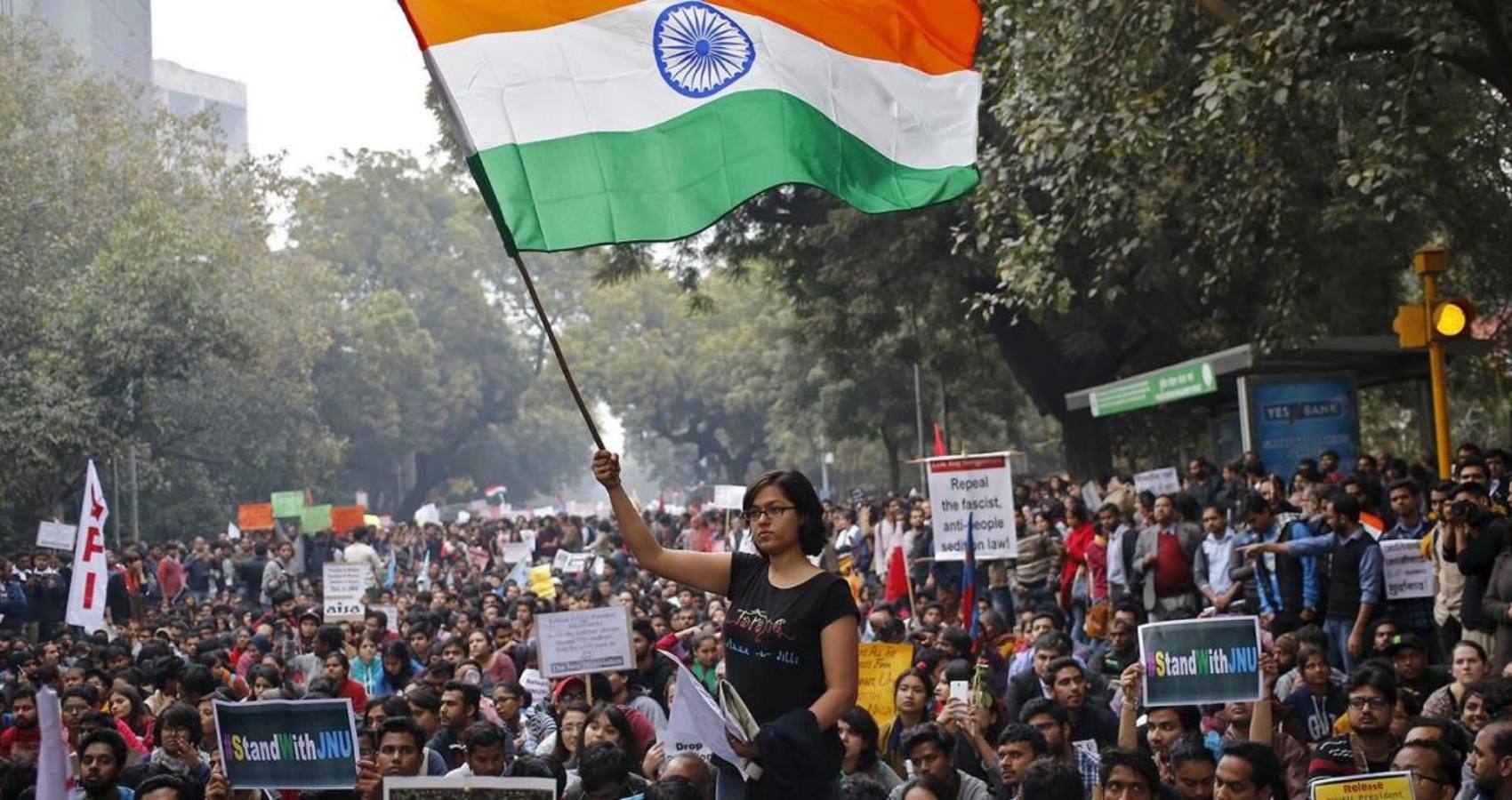 By, P. A. Chacko At Indian Currents

Righteous dissent is right to dissent; and it is a fundamental right. It is guaranteed by Indian Constitution in Article 19 with the freedom of expression. Dissent shows there is another angle or a different viewpoint.  Decent persons listen to what others have to say in dissent. It is letting others to have their freedom of opinion. It may be a critical observation. It could also be a point which the other party has not seen or taken into consideration or an alternative solution. When a government in power does not want to allow such freedom of expression, one smells a rat. If it suppresses dissent with an iron rod, it is the end of the road. Many citizens are of opinion that the ruling BJP deals with every dissenting opinion as unwanted, often dubbed criminal act, sometimes even anti-national. Peaceful demonstrations, representations, meetings, gatherings, etc. are constitutionally guaranteed exercises of democratic freedom of expression. Surprisingly, even such acts or exercises invite the wrath of the powers that are.

Did not Prime Minister Modi put on a Himalayan stature at the recent G 7 summit in Bavaria when he, along with four other countries, signed the document on protecting the freedom of speech? The Hindu noted that “the joint statement came amidst allegations that the Indian Government was stifling the freedom of speech and the civil society actors…In a joint statement titled ‘2022 Resilient Democracies Statement’ on June 27 during the G 7 Summit, the leaders including Prime Minister Narendra Modi, said they were prepared to defend these principles and are resolved to protect the freedom of expression” (thehindu.com, June 28).

But, what a contradiction, when, almost at the same time journalist and Alt News co-founder Mohammed Zubair was arrested by Delhi police for a four-year-old quote from a Hindi film accusing him of hurting religious sentiments. According to Justice Deepak Gupta, “Freedom of speech is one of the basic concepts of our democracy. People are put under pressure if they are made to feel that, if they express a certain point of view, they will have to face trouble either from the Enforcement Directorate or a money laundering case” (Interview to The Wire).

In contrast, a BJP spokesperson, who offended the sentiments of the Muslim community by saying insulting words against Prophet Mohammed, has not yet been arrested. Instead, she is being honoured with security cover. Another spokesperson who supported Nupur Sharma too has been given security cover. “If Nupur Sharma was not arrested, Zubair also should not have been arrested,” says Justice Deepak Gupta.

In every country there are opposition parties. They ventilate public grievances through their critical observations and suggestions. United Kingdom, Canada, New Zealand and Australia have shadow Cabinets of opposition parties. Its responsibility is to scrutinise the ruling party’s policies and offer alternative suggestions or amendments.  Unfortunately, India has no such arrangement. Rather, more often than not, the opposition parties are considered unwanted and treated like carbuncles.

In today’s Indian scenario, public dissent often erupts into violent street theatricals which are not happy solutions. Such exercises may be outbursts of suffocations caused by the iron hand of the government. Instead of dealing with opposing situations through discussions and debates, if they are met with police atrocities and even bureaucratic punishments, the writing on the wall is clear. Executive orders to treat demonstrators as criminals are anti-democratic decisions.

On the other hand, it is often seen that if you belong to the ruling party, you can go any length to create mayhem and terror. Whether to pull down the Ayodhya mosque or to attack minority communities with impunity, it is, as if, the prerogative of the muzzle men with the blessings of the party bosses.

The U.P. incidents where Muslim homes were demolished because they allegedly took part in street demonstrations have attracted condemnations the world over. Here righteous dissent was treated with criminal assault. Three Rapporteurs of the United Nations (Housing Rights, Minority Issues and Freedom of Religion), jointly sent a letter to the government of India on 9th June criticizing and protesting against arbitrary demolitions of houses and properties of people, particularly of the Muslim community. The world is watching and is concerned. Yet we in India play the fiddle.

In a recent Supreme Court case involving Nupur Sharma, Justice Surya Kant (slated to take over as the Chief Justice of India in May 2025) told Nupur’s counsel, “No Mr. Singh, the conscience of the court is not satisfied.” He stated that she should apologize to the nation for her arrogant and insulting remark against the Holy Prophet Mohammed and queried why she was not arrested. He also stated that the fact that she was not arrested shows her clout and power.

It is highly praiseworthy that the Judge sends the incontrovertible message to the nation that the court has a conscience. It would be equally praiseworthy if all the judicial authorities believed in this message and acted accordingly.  The nation, particularly the common man, looks up to the court to exercise its conscience by pronouncing justice without bias or favor.

That is where people expect that the courts in India not to keep mum when the nation is taken for a ride by terror outfits or nationalist marauders. When the wheels of justice turn too slow for ordinary people, the conscience of the court should wake up and call a spade a spade.

When righteous dissent is bulldozed and pulverized by the ruling class or when the minority communities are treated as dirt, the conscience of the court cannot afford to take a blissful nap. The promising sign of the window of justice getting opened by the conscience keepers of the law courts is welcome. However, the suffocation of people suffering from sponsored spiral of violence can be removed only by opening not just a window but all the doors and windows of justice.