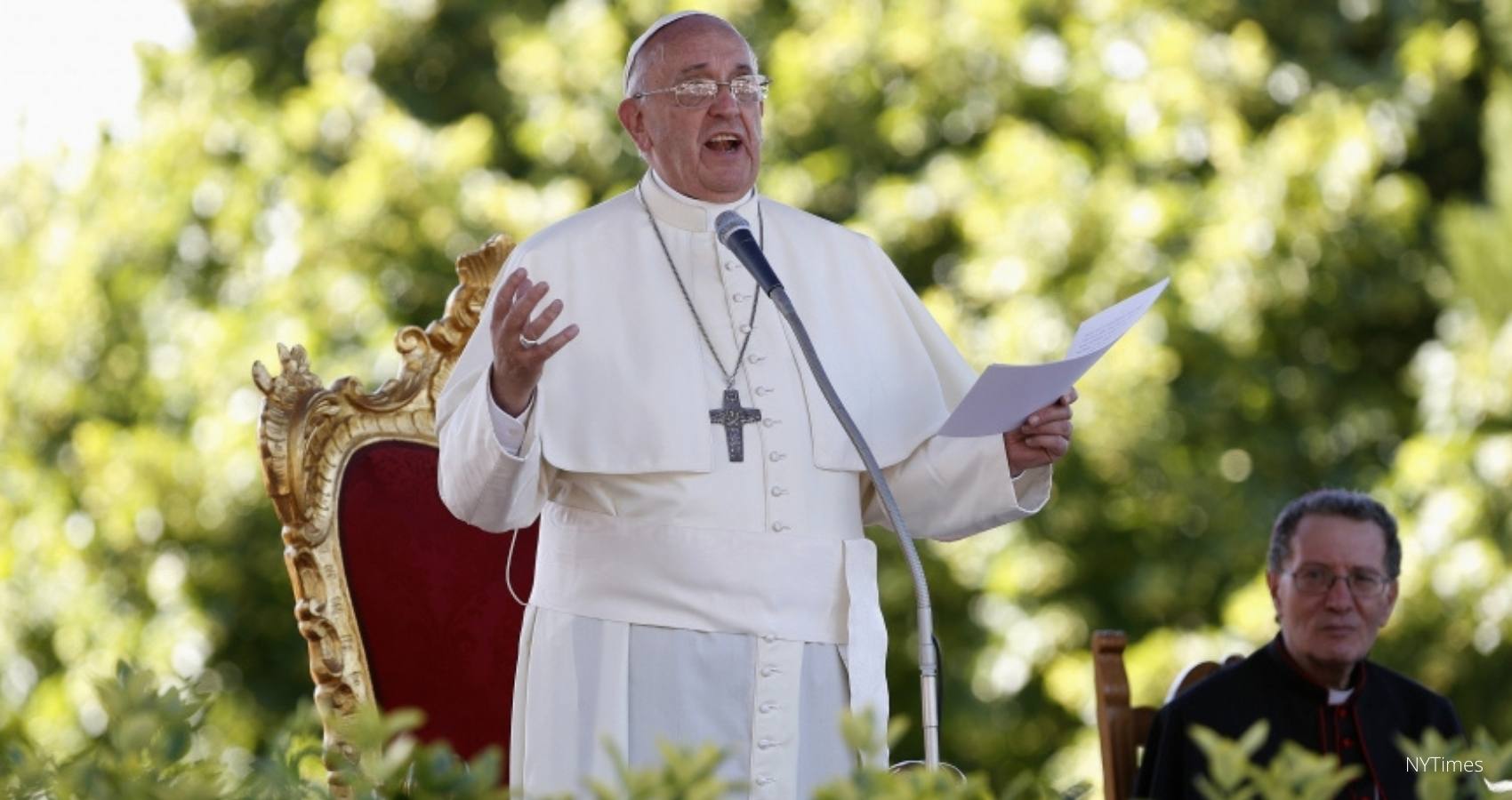 (RNS) — Pope Francis made an impassioned appeal for the environment on Thursday (July 21), urging countries to divest from fossil fuels as temperatures rise all over the globe and put vulnerable communities at risk.

“If we learn how to listen, we can hear in the voice of creation a kind of dissonance. On the one hand, we can hear a sweet song in praise of our beloved Creator; on the other, an anguished plea, lamenting our mistreatment of this, our common home,” the pope said in a video message presented at a Vatican news conference.

“It is necessary for all of us to act decisively,” he said, “for we are reaching a breaking point.”

Francis urged nations to cooperate on four principles that combine the need to “combat the loss of biodiversity” while giving “priority to people in vulnerable situations.”

Francis praised the “demanding” goals set out by the Paris Agreement to limit Earth’s temperature increase to1.5 degrees Celsius and said that the COP27 summit of world leaders in Egypt in November as well as the COP15 meeting on biodiversity in Canada in December represent opportunities for nations to come together in combating climate change and the extinction of species.

On July 8, the Vatican joined the United Nations Convention on Climate Change and the Paris Agreement.

Francis urged Catholics to listen to the cry of the Earth, “prey to our consumerist excesses,” and all creatures “at the mercy of our tyrannical anthropocentricism.” The pope remembered the many poor and Indigenous peoples in the world who most directly feel the impact of drought, flooding, hurricanes and heat waves.

“Finally, there is the plea of our children,” Francis said. “Feeling menaced by shortsighted and selfish actions, today’s young people are crying out, anxiously asking us adults to do everything possible to prevent, or at least limit, the collapse of our planet’s ecosystems.”

He underlined the fact that richer countries have an “ecological debt” to the world, as they have polluted the air and water more than their poorer neighbors in the last two centuries. They must therefore shoulder the costs not only within their borders, but for those nations “which are already experiencing most of the burden of the climate crisis.”

At the same time, he added, poorer countries still have a responsibility since “delay on the part of others can never justify our own failure to act.”

Pope Francis delivers his blessing as he recites the Angelus noon prayer from the window of his studio overlooking St.Peter’s Square, at the Vatican, July 17, 2022. (AP Photo/Andrew Medichini)

Since 2015, the Catholic Church has participated in an ecumenical event called the Season of Creation, which starts this year on Sept. 1 with the World Day for the Care of Creation and ends on Oct. 4, the feast of St. Francis of Assisi, patron saint of the environment. The ecumenical effort, whose slogan is “Listen to the environment,” urges people to pray and reflect on the environment with an emphasis on the concerns of Indigenous peoples and the communities suffering the most due to climate change.

Cardinal Michael Czerny, who heads the Vatican’s Dicastery for Promoting Integral Human Development, presented the pope’s message for this year’s Season of Creation at Thursday’s news conference, saying: “Enough is enough. All new exploration and production of coal, oil and gas must immediately end, and existing production of fossil fuels must be urgently phased out.”

Czerny said the Vatican backed the Fossil Fuel Non-Proliferation Treaty, meant to work alongside the already existing Paris Agreement with an eye to holding countries and companies accountable for their dependence on fossil fuels. It is supported by Nobel Peace Prize winners, academics and a growing number of political and religious leaders.

It also focuses on ensuring that the energy transition doesn’t harm the livelihoods of workers and Indigenous peoples.

Czerny echoed Francis’ appeal that the signers to international accords aimed at reducing reliance on fossil fuels fully commit to their goals. He also praised Catholic institutions that have already done so. He joined the pope in calling for a U.N. agreement to protect the Earth and its oceans so that “ravaged ecosystems” can be restored while “upholding the rights of Indigenous peoples.”

As heat waves rage across Europe and water grows scarce in more and more places, Christina Leaño, associate director of the Laudato Si’ Movement, which aims to realize the vision laid out in Francis’ 2016 “green encyclical,” said that her group will bring their message to the upcoming U.N. summits.

In a statement on Thursday, Leaño called for “a necessary community reconversion to adopt a new multilateral agreement that will stop the destruction of ecosystems and the extinction of species.”

The Laudato Si’ Movement will also call for “more ambitious national contributions to reduce net greenhouse gas emissions to zero as soon as possible,” she said.