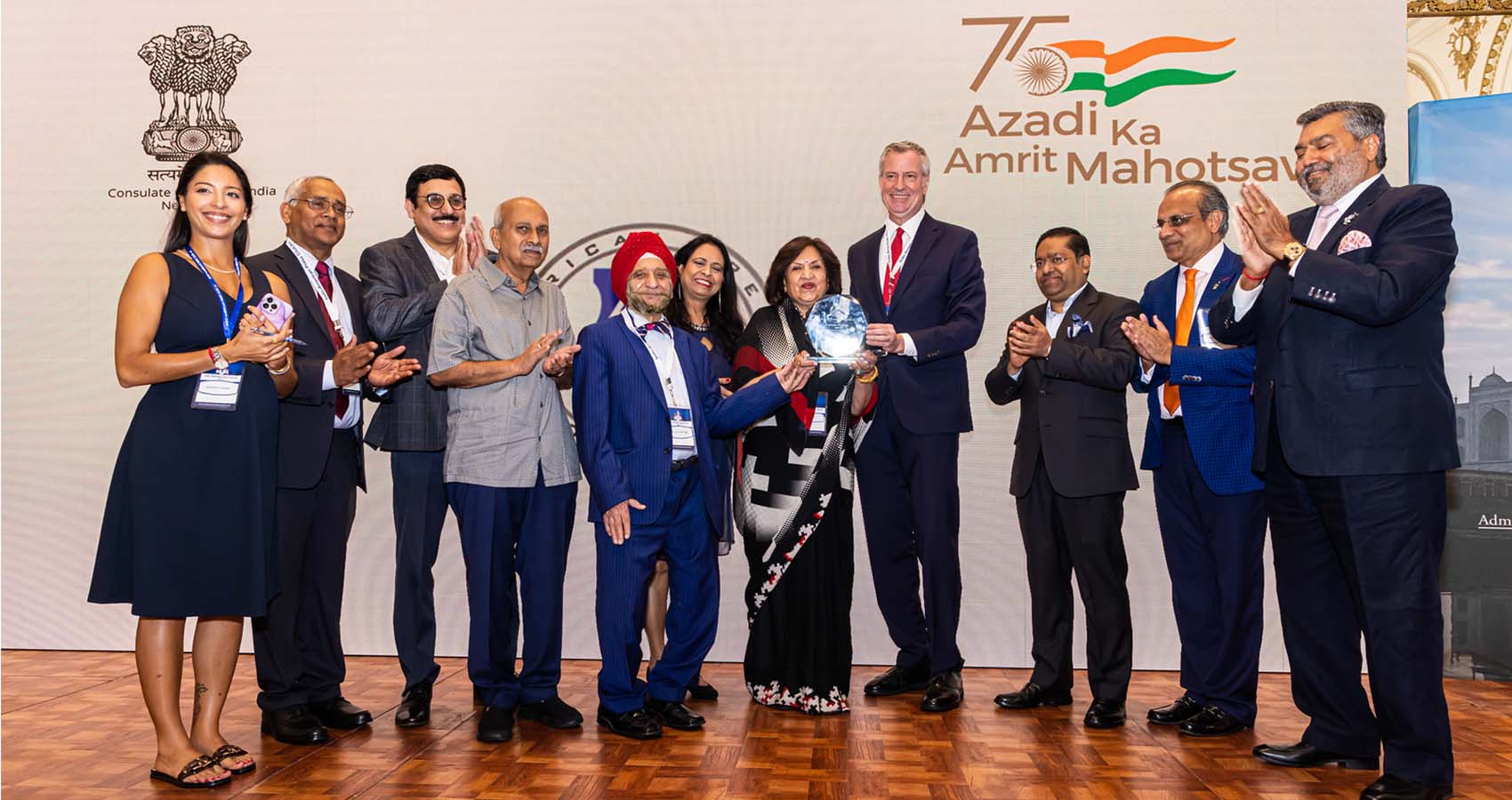 Pamela  Kwatra, a trailblazer and the only Indian American woman recipient of the prestigious Ellis Island Medal of Honor award in 2008, was honored with the Lifetime Achievement Award during a solemn awards ceremony jointly organized by The Consulate General of India in New York and The Indo-American Press Club (IAPC), the largest organization of Indian descent journalists operating in North America , at the Indian Consulate, New York, NY on Saturday, May 21st, 2022.

Mayor Bill de Blasio, who was the guest of honor at the IAPC Induction Ceremony and the Awards Nite Gala presented the award at the Grand Ballroom of the Consulate in New York, which was attended by several community leaders, elected officials, diplomats, media personnel and professionals. 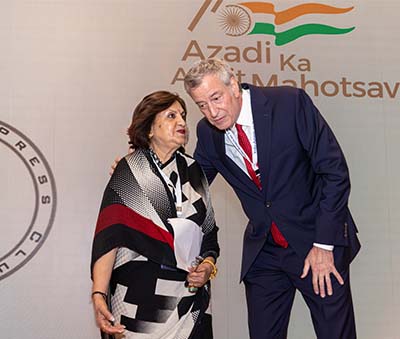 Calling her a “highly accomplished leader” Mayor Bill de Blasio praised her contributions to the larger American society and to the Indian American community. Mayor Bill de Blasio showered praises on Ms. Kwatra for taking up on herself a key role in his election campaign that no other individual has been able to do.

Mayor Bill de Blasio, while congratulating Pam Kwatra on receiving the Lifetime Achievement Award, described her as “a trailblazing businesswoman, a community leader, and a political force with executive chops. No wonder she worked on important projects in my administration at my request. I also came to know that her involvement with the community spans across culture, art & literature – preserving and promoting abroad the rich and varied culture of India.”

While extending his greetings to IAPC, the Mayor said, “Congratulations are due to IAPC for doing a good job, to Kamlesh Mehta, its new Board Chairman, new committee members and all the honorees. We will continue to support this media organization.” 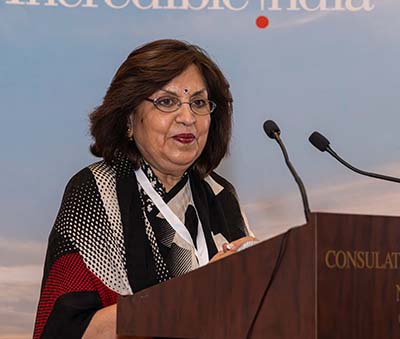 Ambassador Randhir Jaiswal, Consul General of India, who was the chief guest presented the award to the other awardees with the Lifetime Achievement Award, including  Dr. Thomas Abraham, Dr. Sudhir Parikh, and Dr. Anupama Gotimukula, President of AAPI.

The awards ceremony was part of the Induction Ceremony of IAPC’s new office bearers, including Chairman Kamlesh C Mehta and Secretary Ajay Ghosh of IAPC Board of Directors, and members of the IAPC National Executive Committee led by President Aashmeeta Yogiraj and General Secretary CG Daniel.

In her acceptance Speech, Ms. Kwatra said, “I am truly honored to be chosen by the Indo-American Press Club for the Life Time Achievement Award. Your presence and this special occasion, receiving this honor makes its truly a memorable moment and I want to thank Kamlesh ji and the entire IAPC office bearers for bestowing this honor on me today, and wishing you, all the very best.”

While urging the media to a more active role, Ms. Kwatra said, “While the political and racial differences divide us, the role of the media is all the more important in keeping us all aware of and educating us about the need for a just and equitable world.”

While commenting on one of the hot button issues that is deeply diving the nation, Ms. Kawatra said, “We are concerned about the media reports about the Supreme Court draft to overturn the landmark 1973 Roe v. Wade case that legalized abortion nationwide, based on the Constitution that protects a pregnant woman’s right to choose abortion without excessive government restriction. We are worried about women being denied the right to her own health needs.” 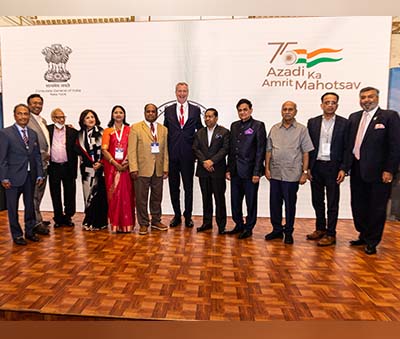 She called upon Media to play a very critical role, “especially in these challenging timers, as the world is faced with the once in a century health crisis with the ongoing pandemic.  Organization such as the IAPC can play a major role in helping heal and unite the nation. Wishing you all the very best. Congratulations to all honorees today and best wishes to the new leadership of IAPC.”

Pam Kwatra has a proud record of civic-social and professional accomplishments and recognition. She was the first woman to launch an Indian American advertising, marketing and PR company, Kripari Marketing in 1992. Pam always keeps the interest of the community and society above personal interest. She has supported numerous community projects for decades and has personally supported many Indian victims of domestic violence in the US.  A member of and leader of several Indian American organizations,  active in politics and grass root organizations, Ms. Kwatra is a graduate of Delhi University.

She is the recipient of “Mother Teresa Award” in 2011 in India. Special Recognition at the event was given to: Ambassador Randhir Jaiswal, Consul General of India in New York for his vision, dedication and community service; Mayor Bill De Blasio, Former Mayor Of New York City, for Excellence in Public Service and Leadership; Dr. Prabhakar Kore, Member of Parliament, India, for his distinguished services in Education and Public Services; and Kevin Thomas, New York State Senator For excellence in Community Service and leadership.