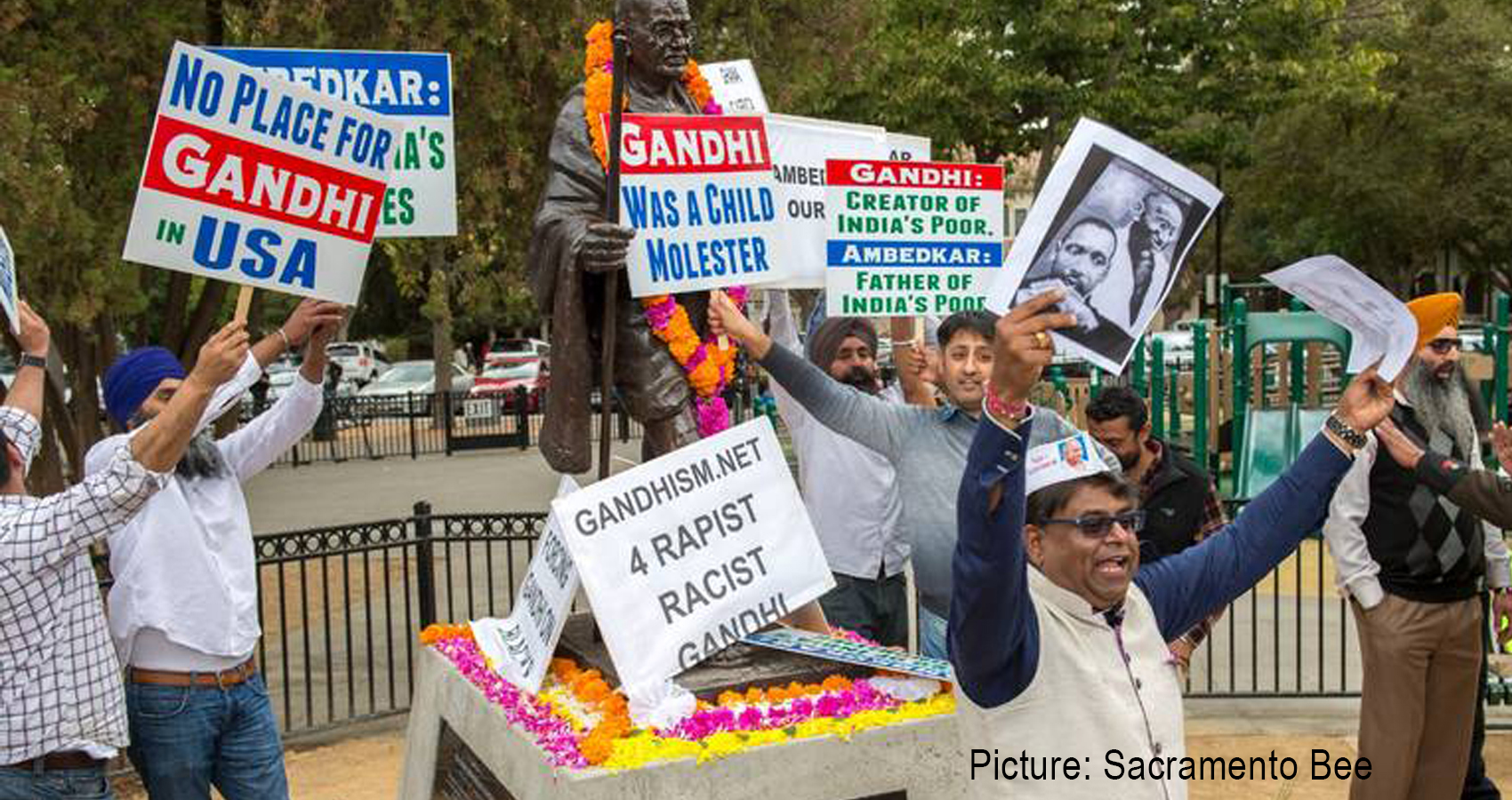 A group of unknown people have vandalised, broken and ripped from the base a statue of Mahatma Gandhi in a park in the US state of California, shocking and outraging Indian-Americans across the country, who have demanded that the officials investigate it as an incident of hate crime.

The 6-ft tall, 650-pound (294 kg) bronze statue of Mahatma Gandhi, in the Central Park of the City of Davis in northern California, appeared to have been sawed off at the ankles and half its face was severed and missing, local news firm Davis Enterprise reported.

The vandalized statue of Mahatma Gandhi was found by a park employee in the early hours of the morning of January 27, the police said. The statue is being removed and will be stored in a safe place until it can be evaluated, said Davis City councilman Lucas Frerichs.

The statue of Mahatma Gandhi, which was donated by the Indian government to the city of Davis, was installed by the city council four years ago amidst protests from anti-Gandhi and anti-India organizations.

Organization for Minorities in India (OFMI), which spearheaded these protests and opposed the installation of the statue. The City of Davis had however voted to go ahead with the installation. Since then OFMI had launched a campaign to remove the statue of Mahatma Gandhi.

Indian-Americans have expressed deep anguish and shock at the incident. In protest against the vandalism of a Mahatma Gandhi statue in California’s Davis, the Indian Association of Sacramento has decided to hold a car rally and has demanded reinstallation of the statue. In a post on Facebook, the group announced that the car rally will be held, and invited people to “Stand Up For Peace, love And Gandhiji, Reinstate Gandhi Statue: Vigil/Car Rally.”

Indian Overseas Congress strongly condemns the destruction of the Mahatma Gandhi statue in California. The Indian Overseas Congress USA, an advocacy organization that stands for democracy and freedom, strongly condemns the desecration and destruction of the Mahatma Gandhi statue in Davis’s town in California. It is more hurtful to see that the miscreants who had done this despicable act on the eve of Jan 30th, the day when Mahatma Gandhi paid the ultimate sacrifice for every Indian citizen’s freedom. IOCUSA shares the shock and anguish in this regard along with every member of the Indian Diaspora.

Investigators are unsure of when exactly the statue was torn down. It has been removed and stored in a safe place for evaluation. The statue of Mahatma Gandhi was donated by the Government of India to the city of Davis in 2016 and was installed by the city council four years ago amidst protests from anti-India organizations.

The Ministry of External Affairs said that India strongly condemns the malicious and despicable act against a universally respected icon of peace and justice, adding that its embassy in Washington DC has taken up the matter with the US Dept of State for a thorough investigation and appropriate action. The MEA further stated that the Consulate General of India in San Francisco has separately taken up the matter with the City of Davis and local law enforcement authorities.

It has been reported that unknown miscreants vandalized and ripped Gandhi’s statue from the base in the central park of Davis in California.