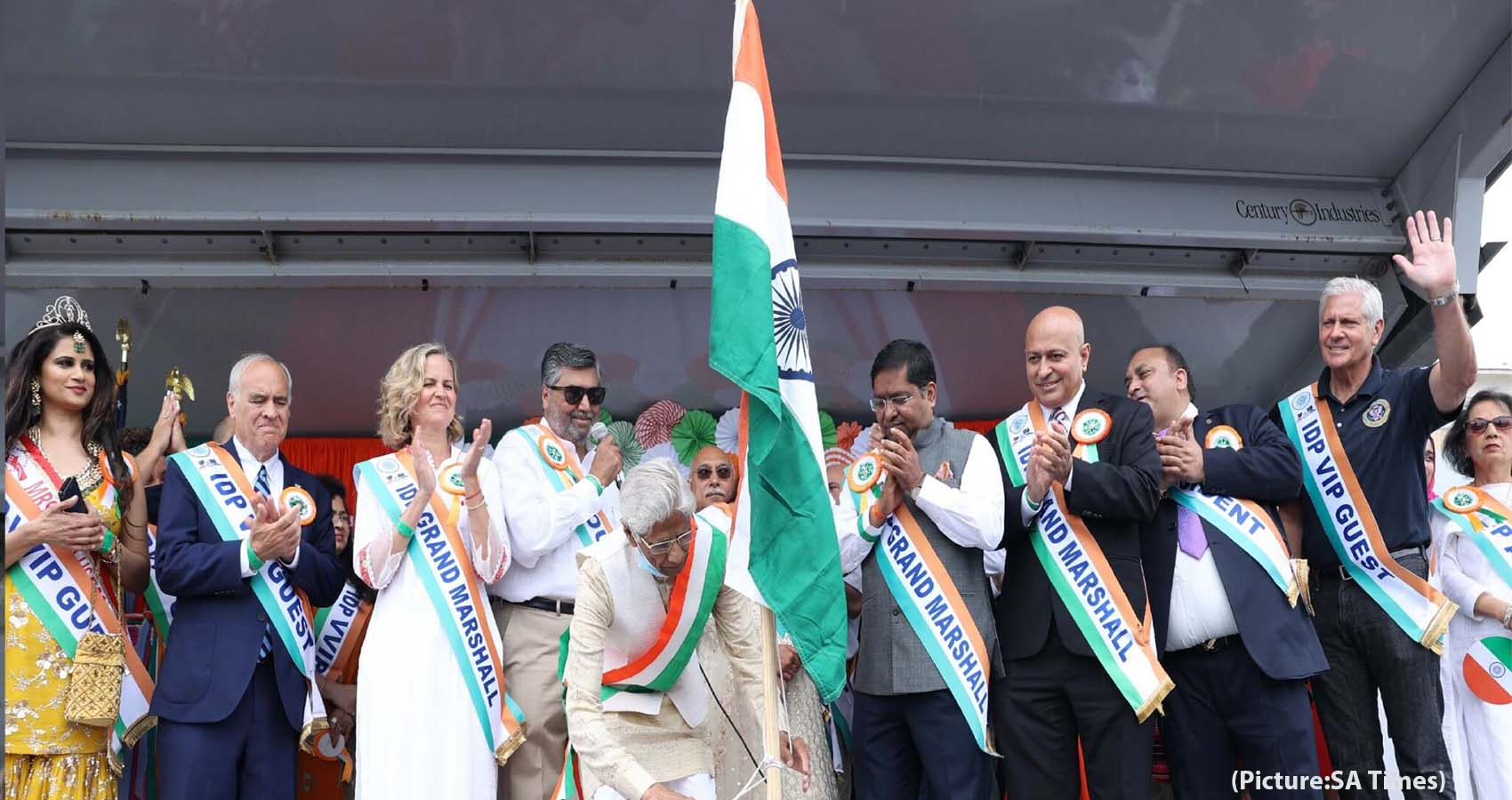 Under the banner of India Day Parade (IDP) USA, all sections of the Indian community joined hands to celebrate the 75th Independence Day with a spectacular parade in Hicksville, NY. People thronged the route of the parade, and gathered at noon at the starting point– Patel Brothers plaza where a stage was set up for the dignitaries to address the gathering — and in the afternoon near the entertainment stage at the parking lot near Asa Mai Hindu temple.

The enthusiasm this time was high because it celebrated India’s landmark 75th Independence Day and it came at a time when pandemic restrictions have been eased. It was also the only India Day Parade in the entire New York state this year. Also, the parade program started with a flag hoisting by the CG Jaiswal. Independence veteran Champakbhai Parikh administered the ceremonial flag‑hoisting with traditional national song and anthem.

The comely Ileana D’Cruz, wearing a floor length crème colored dress, was quite a sport, posing with fans. She is an Indian-born Portuguese actress who predominantly appears in Telugu and Hindi language films.

The entertainment stage saw a few scintillating song and dance numbers and 37 performances by kids, and the program finished around dusk. Facing the stage were 45 stalls selling ethnic clothes and jewelry and food of course. For kids there were free rides and free popcorn.

A Nissan car sponsored by DP Singh of Meetu Magic was the first prize of the raffle. He was there to do the draw and the lucky winner turned out to be Suhag Mehta, impresario and part of the founding team of IDP. Other raffle prizes included an Apple watch, a 50 inch TV set, and 2 air tickets courtesy CheapOair.

President Bansal said the parade represents our motherland and people who come out to support make India proud. He thanked the IDP USA office bearers and committee chairs for working tirelessly over 3 months to prepare for the massive parade. He is grateful in particular for the active support and guidance from Jasbir Jay Singh, who led the team in 2019, and Founder Kamlesh C. Mehta.

IDP plans to celebrate the success of the 2021 Parade at a Gala at Antun’s by Minar on Thursday, August 19, 2021.  A souvenir will be released at the gala.

IDP USA was established in 2012 to create awareness of Indian contributions to the local community by celebrating India’s Independence Day every year.  A 501(c) non-profit tax-exempt organization, its mission is to empower the Indian community through promoting economic development, education, community leadership, social advancement and environmental awareness. The non-partisan and secular IDP USA brings together over 100 religious, cultural, regional, and charity organizations serving the community.