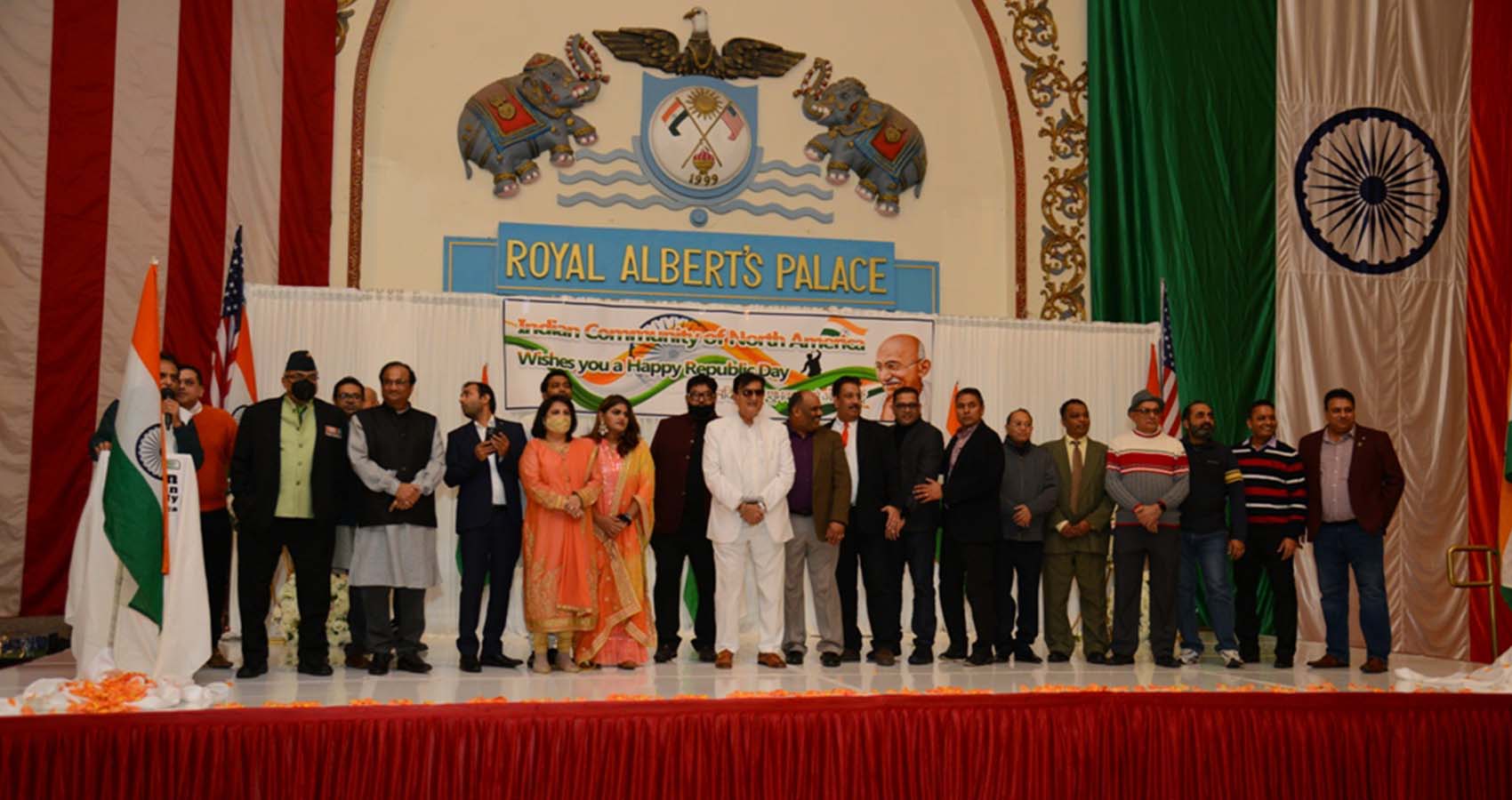 Thousands of miles away from India, their motherland, India remains close to the hearts of millions. Reflecting their love and appreciation for their motherland, Indian Americans across the country celebrated India’s 73rd Republic Day in style in separate functions. Nearly 400 people attended the Jan. 26, 2022 Republic Day of India event organized by the Indian American Community of North America, IACONA. 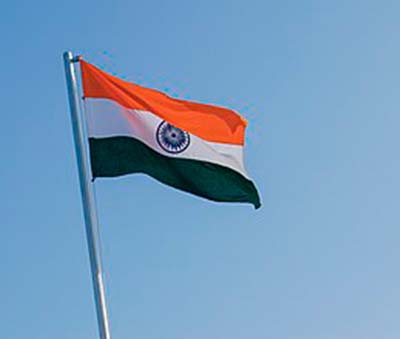 The attendees also included Commissioner Sue Kylie who is running for Congress, and Township office holders, elected officials, representatives from the Police Department and the Department of Defense. Among other guests were heads of several community organizations, sponsors of the event and donors.

Speaking on the occasion, Dr. Sudhir Parikh wished everyone a happy Republic Day.
“This is the day when India really became a democracy 73 years ago,” he said. “And we are happy and lucky that we are here and we are celebrating the Republic Day of India,” he said.

“Let us work for Mother India and do something for Mother India because that is our responsibility to help Mother India,” he added. “I would like to congratulate the Indian American Community of North America and chairman Albert Jasani and other members,” he said.

Following its practice, IACONA awards a community member for their outstanding contribution to the community through the year. This year, the award was given to Dr. Sunil H. Parikh.

IACONA also paid tribute this year to the participants in India’s freedom struggle, with special tributes to Shaheed Bhagat Singh and Netaji Subhash Chandra Bose. This year, a special tribute was also paid to the India’s General Bipin Rawat who died in a recent plane crash along with several others. The event also had a memorial presentation for those of the community who were lost during the pandemic. 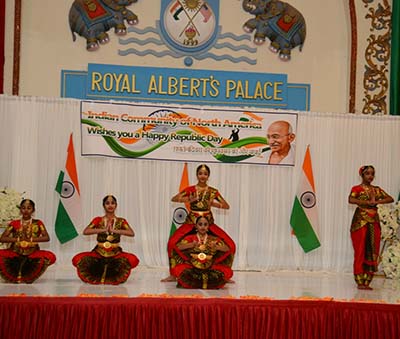 Speaking to those gathered, Dr. Sunil Parikh said he was very proud to see IACONA take a big step towards creating more awareness about India by celebrating India’s Republic Day. He said the SSAI had been working in New Jersey and in India for the past 21 months, providing meals, masks, plasma, navigation help for COVID testing and for vaccination. The organization was planning a new Health Center in partnership with St. Peters Hospital, he said.

Chandra Jhaveri, dressed to represent Prime Minister Narendra Modi, said he wanted to show his respect to the Prime Minister by doing that and called for hailing India in one voice.

Council member Juned Qazi said, “I wish all the Indians in America and globally a Happy Republic Day,” he said. Introducing Commissioner Kylie of Monmouth County as a candidate for Congress, he said, “I want all Indians to vote for her.”

Commissioner Kylie said, “I am very excited to have met a lot of the Indian community at this wonderful celebration. … A great great group of people that I immediately fell in love with.”

Dev Karlekar, founder and CEO of GuruSchools, acknowledged all the dignitaries gathered. “Today we are celebrating India’s Republic Day at the  Royal Albert Palace, New Jersey, along with some of our prominent leaders such as Councilman Juned Quazi who has brought some other political leaders to this event to spread awareness about India and Indians,” he said. “Needless to say, Albert (Jasani) graciously opened his doors so that we could have the event. All precautions about the pandemic and protocols were followed. Thank you ITV for covering us, Bharat Mata Ki Jai, Vande Mataram,” he concluded.

One of the attendees recounted his experience decades ago when he participated in the ceremonial parade on Rajpath in New Delhi. “I walked and saluted our ‘tiranga’ on Rajpath. That has become my lifelong memory till today after 63 years,” he said.

The Indian Embassy in Washington, D.C. celebrated India’s 73rd Republic Day observing Covid-protocols, by having an in-person and online broadcast of the event. Attended by community members and watched by others as it was webcast, the event highlighted the achievements of India in various fields including during the Covid-19 pandemic.

“Today, India is better placed to face the increasing challenges and complexities that the world encounter. We have a massive vaccination drive against COVID-19 ongoing, administering more than 1.6 billion doses so far, and taking vaccines to the remotest corners of the country. The initiative of the government aimed at boosting jobs, consumer demand, manufacturing, infrastructure, agriculture and exports are accelerating economic recovery,” said Ambassador of India to the United States, Taranjit Sandhu, during the 73rd Republic Day of India celebrations, at the India House, Jan. 26, 2022.

He also noted that this was the year that the world’s largest democracy was celebrating its 75th Anniversary. To mark the 75th anniversary of Indian independence, the Government of India launched a special initiative, Azadi ka Amrit Mahotsav, which was inaugurated by the Prime Minister of India, Narendra Modi, last year. The official start of the initiative was March 12, 2021, a 75-week countdown, which will end Aug. 15, 2023.

The 73rd Republic Day of India was celebrated in the Consulate General of India, New York with a flag-hoisting ceremony on Tuesday, January 26, 2022. Due to the pandemic, the number of participants attending the event was restricted. However, the event was telecast LIVE through the Consulate’s social media platforms, so that a larger audience could participate.

As is the tradition, the Consul General then read out the address of the President of India. A video congratulatory message received from Governor of New York Kathy Hochul was played at the event.

A short cultural program was presented by Bharatiya Vidya Bhavan, which included singing of patriotic songs and poetry recitation.

Around the United States, various Indian Consulates and local community and cultural organizations also celebrated the Republic Day with much fanfare in virtual mode. 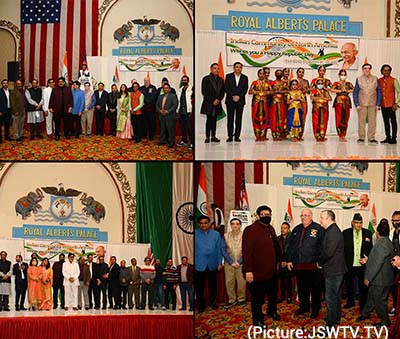 The Federation of Indian Associations Ohio held a Flag Hoisting ceremony at the Ohio State House in Columbus, Ohio, on January 26. Ohio State Senator Niraj Antani and prominent members of the Indian community were present at the event. The program was live-streamed.

Because of Covid restrictions, the event was a combination of Zoom/YouTube/Facebook live in front of the 75 invited guests, and more than 1,000 online guests, according to a press release from the organization.

Worcester Union Station was decorated in the hues of saffron, white, and green as the Indian tricolor was unfurled by dignitaries belonging to different castes, creeds, religions, and colors, reflecting the joy of unity amidst diversity and to mark the 73rd anniversary of Republic Day of India, organizers noted.