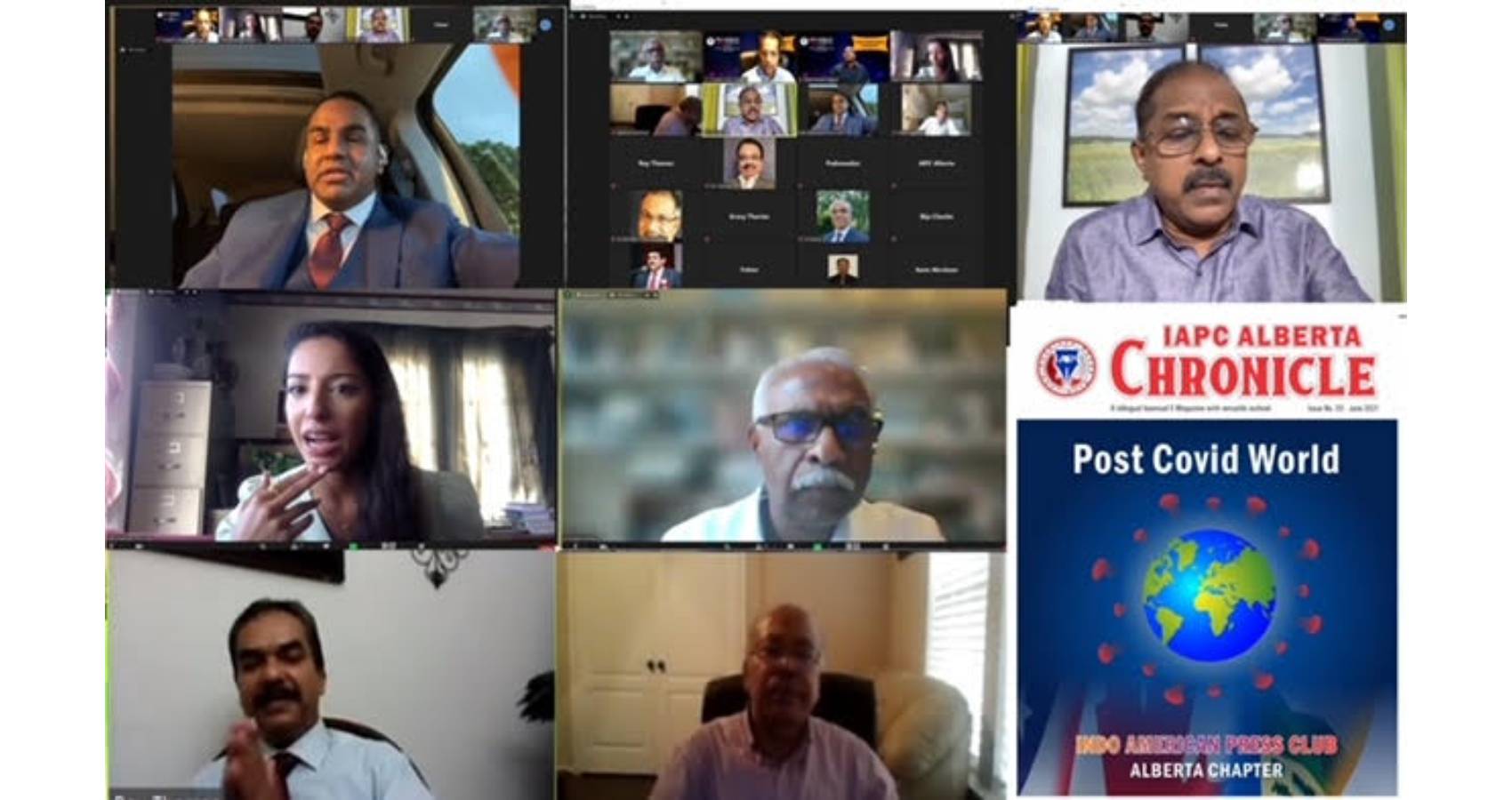 Indo-American Press Club, USA, held an international e-seminar on ‘BEYOND COVID’ on June 26, 2021, hosted by the Houston Chapter. The panelists included two medical professionals,Internationally well-known COVID and pandemic experts, and another management and technology consultant.

The meeting was moderated by AashmeetaYogiraj, Director of JUS Broadcasting Corp, New York. IAPC Houston Chapter hosted the forum. Moderator AashmeetaYogiraj, while introducing the speakers, added, “You know almost 60 – 70% of the country has received at least one shot. So they’re excellent numbers. But unfortunately, back home in India, situation is yet to progress. We’re going to talk about the covid scenario globally and specifically in India and then how you know the economic crisis and recovery. All of these things are intertwined”.

Prof. (Dr.) Joseph M. Chalil is the Chairman of Indo-American Press Club and is the publisher of the Universal News Network. In addition, he is an Adjunct Professor and Chair of the Complex Health Systems advisory board at Nova Southeastern University’s School of Business. He recently published a Best Seller Book – “Beyond the COVID-19 Pandemic: Envisioning a Better World by Transforming the Future of Healthcare.” He spoke about the emerging COVID variants and the global pandemic situation. “The fear of the unknown is what scares all of us. We have, as you know, maybe 60% of the population vaccinate in the US?. He explained that there hadn’t been a pandemic in the history of the world that lasted less than five years. This is the first time where the pandemic, you know, spread faster than ever before.”

Dr. S S Lal is IAPC’s National President, who is a world-renowned public healthcare expert and had worked earlier with WHO in Papua New Guineas, Switzerland, and the USA as a pandemic expert. He is also President of the All India Professionals Congress (AIPC). He a famous writer and TV channel panelist on health and social issues.
Dr.S.S.Lal emphasized the Covid situation in India.”Because it’s a federal system in India and a lot of differences between different states, so vaccination is less than 20%. So far and some states have better access to vaccines. Some states have less, so vaccination is a big issue in India.

It’s not easy to vaccinate. The eligible population itself is close to one billion.” He also added, “Everyone is aligned so, and we are progressing, and we are in the right direction. But we were a bit late and producing manufacturing vaccines for the entire country. We are the biggest manufacturers of vaccination in the whole world”. Regarding the various vaccine’s efficacy, he added,” See, initially there were some confusions so that we have two vaccines. Covishield and CoVaccine Plus. We are importing Russian Vaccine Sputnik, in minimal quantities. So far, Covaccine was manufactured in India, but it was produced by Oxford company.

Astra Zeneca’s vaccine, was a foreign product as far as India is concerned, was manufactured in India by Serum Institute. Before administering it 26,000 people were tested with it and 6000 were from India. CoVaccine is entirely produced in India. So we have that capacity like technology-wise or production quantity-wise”. Dr. Lal as the world-renowned expert on infectious disease control, elaborated the situation and possibilities in the days ahead. Joseph Ponnoly spoke about the economic crisis arising from the COVID pandemic and the economic recovery scenario in the US and globally. He is a management and technology consultant based in Houston, TX. He authored the book Gateway to the Quantum Age: Managing Disruptive Technologies in Globalized Knowledge Economies’ published in 2018. Earlier, as a CBI officer, apart from investigating various high-profile economic crimes and frauds, he was a team member investigating India’s biggest stock market scam in 1992, involving investigations against Harshad Mehta and others.

According to him, the economic recession was averted in April 2020 by Government intervention and massive stimulation packages ($5.5 Trillion in the US) that stimulated the crumbling economy. The cut in interest rate further supported the economic recovery. Poorer sections in India were given food kits. The economy cannot open up and grow unless the pandemic is brought under control through massive vaccination. The rising inflation must be brought under control to prevent a recession. The poorer nations would need financial assistance from the IMF and other agencies to tide over the debt crisis. Various questions on delta and muted variants, immunity, herd immunity, side effects of vaccinations, various vaccinations available in India were subtly answered by Dr. Joseph Chaliland Dr.S.S. All. The seminar commenced with Roy Thomas, President of IAPC Houston Chapter, welcoming the panelists and participants.