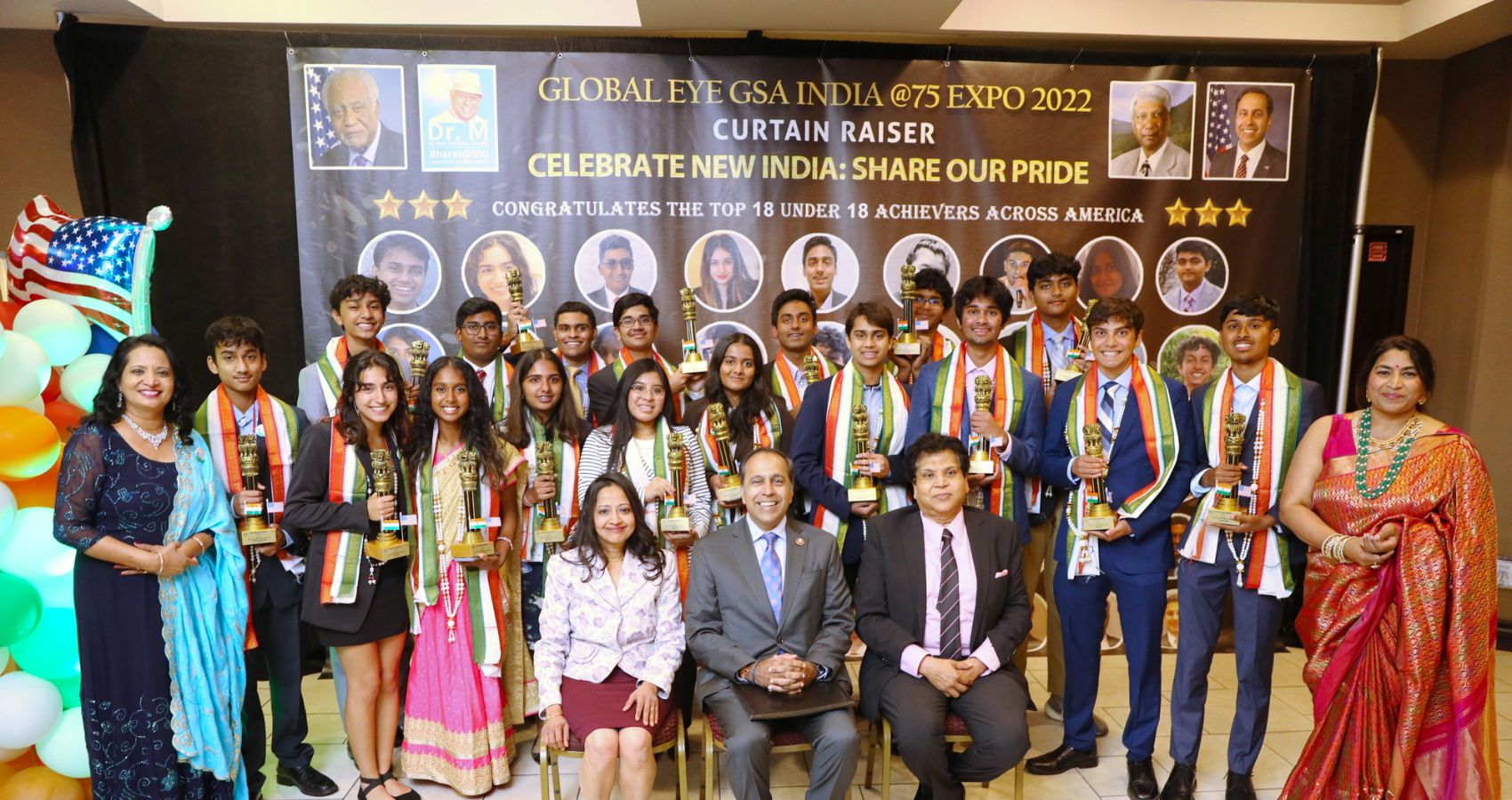 From September 23-24th, Chicago hosted an event of utmost grandeur and elegance. It was called the GSA (Global Strategic Alliance) India Expo @75 Curtain Raiser, which was meant to set the scene for the GSA India Expo that is going to occur in December. This Curtain Raiser truly set the bar, and it set the bar high. This event has made it clear the the GSA India Expo will one hundred percent be one of the most impactful events of our time for India’s recognition and cultural diversity.

In an event of such spell-binding presence, the Curtain Raiser made it one of its missions to recognize the Indian American youth of the nation for the service they have contributed to both the United States and India. From Arizona to Maryland, 18 Indian American youth under the age of 18 were chosen to receive a timeless and tremendously impactful award on September 24th, 2022. This was the first annual 18under18 Indian American Achievers celebration, meaning that 18 more people will be recognized next year, and the following year, and so on. To make this event as spectacular as possible, the GSA Expo organized a Youth Empowerment Conclave under Dr. Vijay Prabahakar, a guiding light for all Indian Americans looking for cultural exposure and recognition. This conclave featured college students, graduates, adults, senior citizens, doctors, gemologists, and, of course, the 18under 18 youth.

This Youth Conclave served as a free platform for talented, unique minds to get together and bounce off ideas on society, education, leadership, etc. It was a platform of sharing and platform of purpose. The Conclave was held in a conference room that resembled a United Nations conference room or an international diplomacy room. With this, came tons of speeches about life experiences and what it means to look to the future of society. Sathya Padmanabhan, a student leader from Phoenix, AZ moderated the conclave with dazzling influence. He drove the event with determination and confidence and was also honored as one of the 18under18 during the event.

Four honored panelists were featured at the event as they gave their motivational and powerful speeches on the stage. Arushi Jain, a senior consultant at Thoughtium gave her advice to the youth on what it means to be successful and what it means to adapt to life’s changes. Following her, Mohansrinivas Chennakesavalu gave his thoughts on life and encouraged the youth to enjoy the world for what it is while pushing hard to make an impact. As a medical student at the University of Chicago, Mohansrinivas shared some of his experiences as a student and drove the youth to always look to the future when making decisions. Swetha Loka, who is currently pursuing her masters at Stony Brook, shed some light when talking about adversity and what it means to overcome it. Finally, Zak Khan, a debonair gentleman who is currently the director at Lumen Technologies – a fortune 500 company. He shared his style through his speech as he explained how one must always persevere and look for new perspectives as they traverse through the ups and downs, twists and turns, and bends and bumps of life.

The 18under18 were also then prompted to give a speech about their visions, missions, and impact as the Concalve progressed. Here are the profiles of these outstanding, high-achieving 18under18 Indian American youth:

Sathya Padmanabhan from Phoenix, Arizona, is one of the most influential Indian American student leaders of our time. As the Student Wing Secretary of the World Federation of Tamil Youth, Sathya has spoken at Reverend Jesse Jackson’s Press Conference in which he urged for the supply of COVID vaccines to help India during the pandemic, won a Congressional Medal of Excellence at the 11th Congressional Met Gala with Congressman Danny K. Davis, and has also conversed with TamilNadu Chief Ministers and Congressman Raja Krishnamoorthi. He has also founded a 501(c)(3) nonprofit called Brillianaire, that seeks to provide free educational opportunities to students and under-privileged communities internationally. His organization has reached 510+ students, served 1000+ hours, accrued 50+ volunteers, and has even established 5 global chapters. In fact, Sathya was recognized by the Federation of India Association for his work as he was awarded a Youth of the Year trophy for Community Excellence.

Aarya Rajesh from Naperville, Illinois is an ambassador for a global sports nonprofit that connects students for scholarship opportunities. He also leads a team of sixteen at his school to conduct ground-breaking research on advanced photons at Argonne National Laboratory. He was also a political affairs intern for the Borgen Project.

Abhra Ghosh is a cricket player who has put lots of time and effort into expanding the sports scene from students and under-served communities. He connects people globally to appreciate athletics and sports for its talent and dedication.

Advaith Srikanth is a Karate Black Belt and a Tabla enthusiast. The tabla is an Indian musical instrument and Advaith has achieved milestones with his incredible Tabla playing. He has been recognized nationally and he also plays Cricket.

Arul Kolla is a mathematical genius who has a countless number of achievements. He represented the USA in the International Linguistics Olympiad and pushed his team to win a gold medal. He is also ranked in the top 5% of competitive programming. He loves to spread his joy for math, so Arul has alos written and published his own book called Taking Aim in which he describes how to approach math creatively and from outside the box. He has also made a math game called Blocks which has been published on Math Playground, receiving 1.5 million plays. He won the International Telugu Spelling Bee and currently does research on linear algebra with a UCLA professor.

Arushi Kashyap is the pioneer of the no plastic bags campaign in which her nonprofit pushes toi ensure that no oceanic waste in the form of plastic is seen in her community and beyond. She is also involved in lots of research and works to promote the STEM fields.

Arya Babu is an international pianist who has been able to play at Carnegie Hall 12 times. She is the co-founder of Feed the Soul Through Music foundation and has also been recognized in Germany, London, etc. for her piano skills.

Farah Raman is the youth ambassador for Eye Level, which is a STEM academy. She is the head of internal affairs for the Tri-M Honors Society and the President of Youth and Government in her community.

Karthik Rajaram is a school ambassador and outstanding leader that has pledged time to make an impact in his own unique way. Motivated by a slow computer, Karthik has made his own startup selling custom built PCs to people across the nation. As the world advances further and further into tech, Karthik has proven to make a larger and larger difference in society.

Manish Rangan is the creator of UVSET-SAFETouch, which is a multi-patent pending innovation that seeks to eliminate germs from dorr handles and public settings. His vision is to create a germ-free society, especially after witnessing the impacts COVID brought upon our world.

Anirudh Seshadri is the founder of TeenAiders who has volunteered to create immense learning curricula for villages in India. He has been recognized globally for his impacts

Pinakin Kale worked as a legislator in Youth and Government and has been selected by the Rotary Club to attend a selective leadership program. He has also taught computer courses in high school. Riya Kapoor is the winner of the Sudden Cardiac Death Awareness Research Foundation (SCDARF) Scientific Symposium. She has tons of leadership experience as she works hard to further her school’s mission at Lake Forest Academy, and she has also been appointed as the Public Relations Board Driector for the SCDARF.

Rohit Sharma is a financial mastermind and has published a book on financial guidance for teenagers. His book seeks to give advice to teenagers on how to manage their finances as their life goes on.

Sachi Singh is the co-founder of the no plastic bags campaign with Arushi Kashyap and has been working hard with local and national organizations to further their mission of making sure the oceans are clean of any plastic residue.

Sathvik Sankaranarayanan started the Ekam Houston chapter and has raised over $30k to help with COVID relief. He has also made strides in health and hygiene and has brought clean water to hundreds of families in India. Sathvik is also an incredibly accomplished Mridangam player.

Vedant Shukla is the leading volunteer for Sewa International and has served 150+ hours of community service. He loves to play golf, tennis, and volleyball for his school team and he has also organized $5k in funds to school and community clubs.

With this in mind, it is only right that these individuals be recognized for their work in this nation. For that matter, US Congressman Raja Krishnamurthy flew in from Washington D.C. just to present the awards to these 18 amazing individuals.