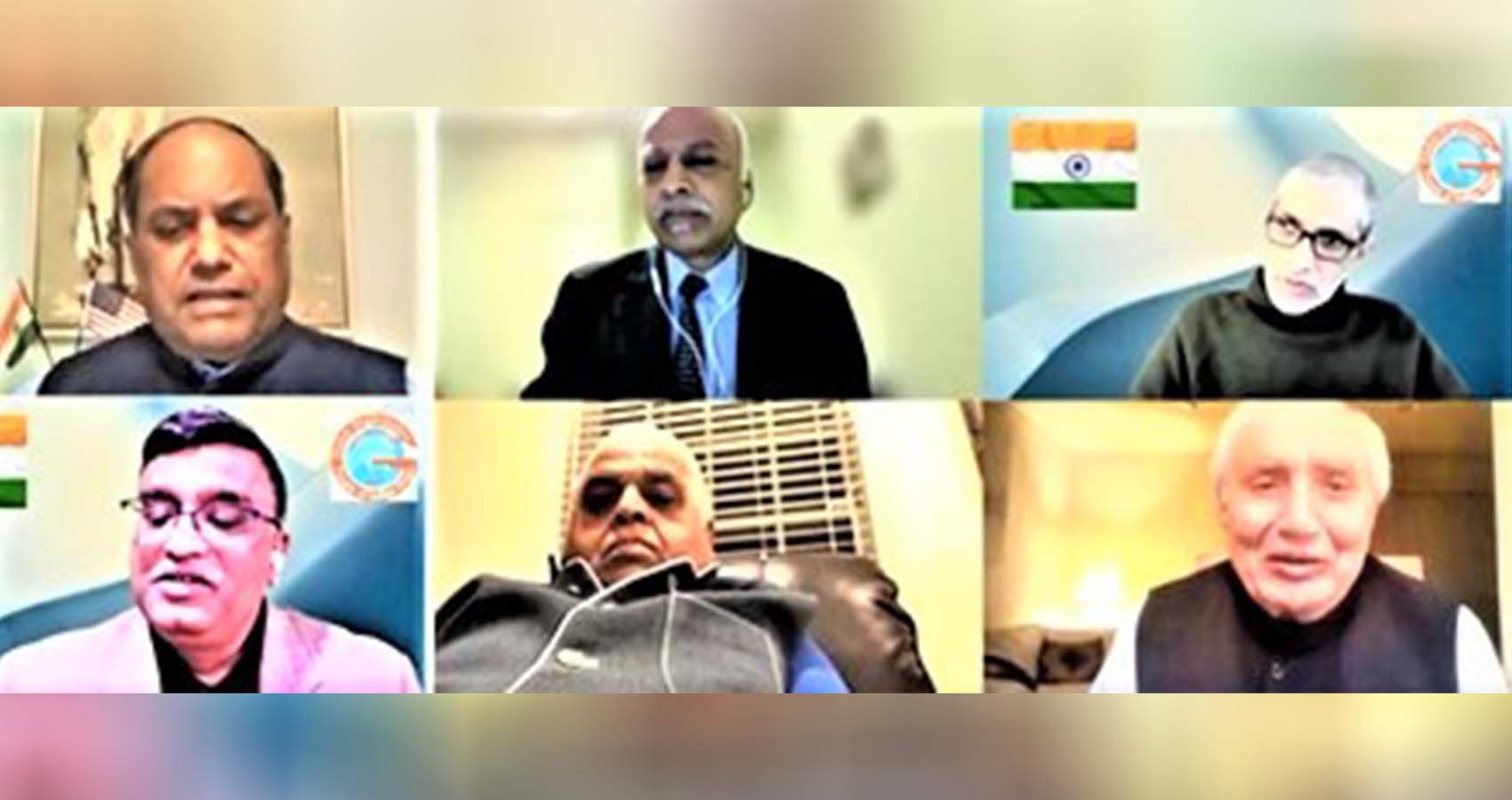 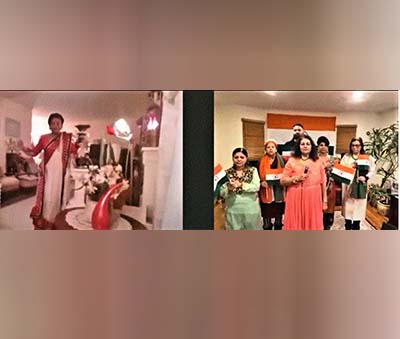 In his inaugural address, Indian Consul General Randhir Kumar Jaiswal, a career diplomat with over two decades of diplomatic career serving in Portugal, Cuba, South Africa and at the Permanent Mission of India in New York, greeted the Diaspora in the United States and around the world on the occasion of India’s 73rd Republic Day celebrations.

Stating that celebrating India’s Republic Day is special each year, but this year it’s more so because it is the 75th anniversary of India’s Independence, Azadi Ka Amrit Mahotsav, Ambassador Jaiswal pointed to the several events that are being organized across the United States to commemorate the event, where a large number of people joined virtually and in person, including Greetings and Proclamations from the Governors of the state of New York And Ohio and from the mayor of New York City as well as from the NY state Senate. 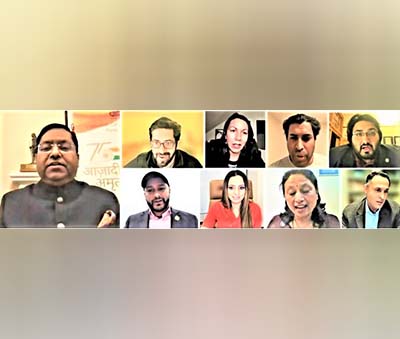 Referring to the several elected Indian American leaders who attended the event, Ambassador Jaiswal said, “Your presence and greetings mean a lot to us and to the Indian Diaspora and to the Indo-US relationship.” Announcing that India has provided 1.6 Billion does of Covid vaccination in the past 1 year, the senior diplomat representing India told the participants, how India’s economy is doing remarkably well and that there are 60,000 StartUP Companies established in the past year. He praised India’s efforts towards women’s empowerment as India continues to contribute towards world peace and prosperity.

Neil Makhija, Executive President of Indian American Impact spoke about how they work towards helping NRIs get elected to state and national offices. “Our goal is to increasing the representation of NRIs in all states,” he said. “Across the country, a record number of Indian-Americans have been elected to the state and national offices. I am thrilled to be where we are today.” He went onto introducing each of the elected officials who had joined the celebrations today.

Vipin Gopal, State Senator from New Jersey recalled his recent visit with New Jersey Governor Phil Murphy traveling to several states in India meeting with several Chief Ministers and building relationships collaborating in several areas between India and New Jersey, which now has the fastest growing Indian American community in the United States. He proudly stated about how New Jersey has passed the legislation including Asian American history in the school curriculum teaching Indian history to all school children in the state. Referring to his frequent trips to India to meet with his grandparents, the young Senator said, “I am inspired by the values taught by family, which we carry them in our lives.” 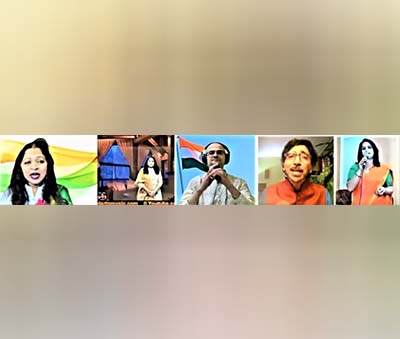 Kesha Ram, Burlington, Vermont, VT State Senator, shared of the reasons for her entering politics. “I got engaged with the community for long, where we care for each other.” One of the youngest ever to be elected to State Assembly at the age of 21, she said, “I am the first ever woman of color top be elected to the state Assembly in Vermont. Continuing to break through the barriers, we can work together to elect more NRIs. “It’s incredible to be of public service, following in the footsteps of my great grandfathers, ” she said, referring to her ancestry back in India, who had fought for the freedom for India. “We have carried with us that spirit of community service.”

Ohio State Senator Niraj Antani, said, he is the 2nd Indian American ever elected to a statewide office and he is one of the only Republicans of Indian Origin to be elected. “Freedom is rare and needs to be upheld and protected. I work hard to reach across the aisle, and cooperate with people in both the Parties to legislate.” Sharing his early days and inspiration to enter politics, he said, “My parents worked hard to live the American dream. There is a need for us to be at the decision making table. Everyone is able to realize the dream. We stand on your shoulders, to carry on the Indian values.”

State Rep. Raj Mukerji from the state of New Jersey said, “We are celebrating the world’s largest democracy today and India’s contributions to building a better world for all.” He pointed to how the Indian American Cacuses are growing across the nation and in several states. In the state of New Jersey, the Indian American representation in state offices has grown from 1 to 7 this year. “That’s the way it should be. I am proud of all that GOPIO has contributed socially and financially to make this happen. I am proud of the contributions of the Indian Diaspora, who are in the front lines of global healthcare. NRIs are helping the nation and the world, come out of the Covid. And it’s the time to celebrate.”

NY State Representative Jenifer Rajkumar from the 28th District thanked GOPIO and the Indian American community for the inspiration she has had in her life, “Indian identity is central to my election to the state assembly in New York. I stand on your shoulders as GOPIO has played a great role in helping me get elected to the State Assembly.” Referring to the record three Indian Americans elected to the state, she said, “We made history and I want to thank the community leaders who have made this possible.”  Rajkumar shared with the audience as to how growing up in a family that emphasized the teachings of Gandhian principles has helped her to appreciate diversity, justice and equality for all. She referred to the Bills she has introduced in the Assembly to celebrate Punjabi culture and declaring and October as Hindu heritage month as well as to celebrate India’s Independence Day.

New Hampshire State Rep. Latha Mangipudi, who has been elected to the NH House of Representatives, shared with the audience about her own life, challenges in becoming a female, non-White elected official from a state which is majority White. “It was a very slow and gradual journey after I had come to the US to pursue higher studies in the 1980s.” Inspired by Gandhiji’s message of non-violence, which Martin Luther and late Rep. John Lewis had imbibed in their public life, the 1st generation Indian American said,  “I am a woman, Brown colored, 1st generation Indian and very vocal in expressing my views.” Stating that she has introduced traditional health systems of India including Ayurveda in New Hampshire,  she thanked the Indian Consulate which has “worked with us to enhance awareness on India and its diverse culture and democratic values.”

GOPIO Chairman, Dr. Thomas Abraham in his introductory remarks highlighted how India, after a long non-violent struggle, India got its independence from the British Colonial Rule and declared itself a Republic in 1950 with one of the longest written constitutions. “Although we started with almost nothing, in 75 years, India made progress under democratic rule and is now moving forward to become the Third Largest economy in the world. As we celebrate 73rd Republic Day of India, let us rededicate ourselves to the cause of democracy, freedom, justice, and peace not only in India but all over the world,” he said.

Dr. Abraham, a veteran Non-Resident Indian community leader pointed out that India has sent a large number of its brightest to America, who have made substantial contributions in building up the economy of America. “Our contributions are noted very well in the Health Care especially our doctors and nurses are frontline workers against Covid. We have also made outstanding contributions in hospitality, science and technology and education. We are also not behind in the political process. The biggest achievement came when one of us, an African/Indian American woman Senator Kamala Harris was sworn in as the Vice President of the USA.  The last General Election also saw a larger number of Indian Americans being elected to state legislatures. Eight of them from the Northeast have joined us this evening. Thank you to all for joining us,” Dr. Abraham said.

GOPIO members have been in the forefront, contributing to the larger community here in the United States and towards supporting various initiatives back home in India, especially during the Covid pandemic. “We had sent Oxygen concentrators to India last year when the Pandemic was at its peak. Many GOPIO chapters continue to serve the local communities in different countries by donating and serving food to the homeless and needy and replenishing and providing cash to the food pantries which serve the homeless and needy families.” He urged the larger Indian Diaspora members to become GOPIO members, either at the International level or the chapter level.” 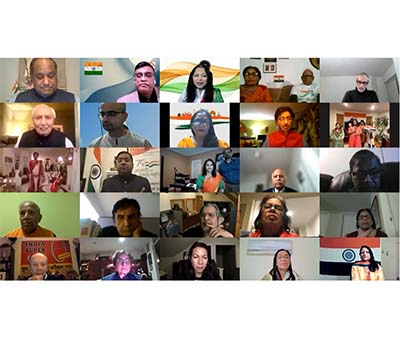 Dr. Jaya Daptardar eloquently emceed the event. American  National Anthem was sung by: Mathy Pillai, while the Indian National Anthem was by Jyothi Gupta and team from Long Island. Popular artists from around the world, including Pallavi Belwariar , Kedar Godbole , Srinivas Gunupuru, and Trupti Shah presented popular evergreen patriotic songs such as Vande Mataram and Jai Ho with their beautiful voices. Media Sponsor and Live Streaming was provided by Indus TV (New Jersey). Shivender Sofat, President of GOPIO Manhattan, proposed vote of thanks.