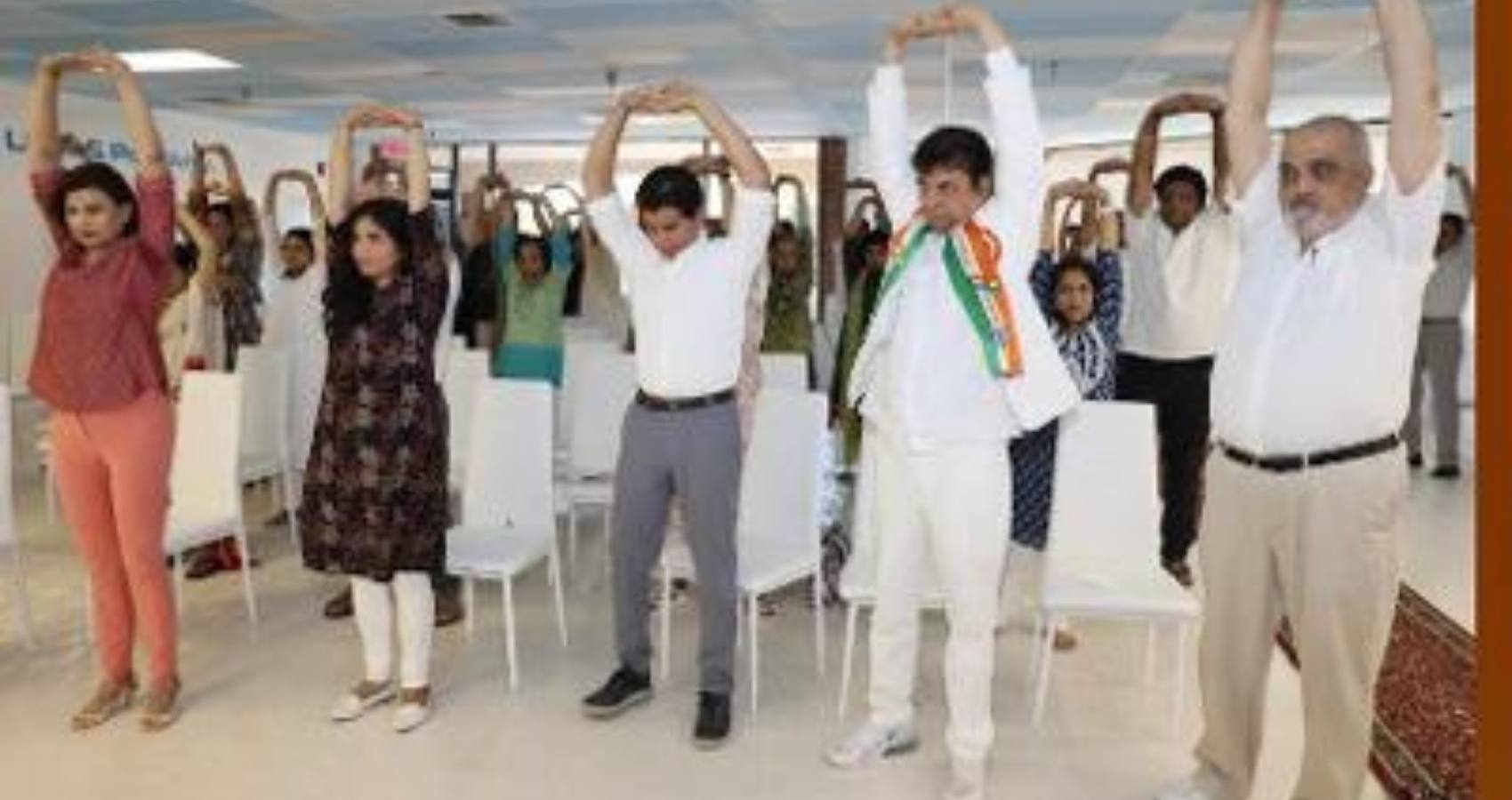 All guests were ushered in by the Welcoming Team, following the Indian tradition with Chandan kumkum teeka and flowers. The yoga event began with the opening address, by the hostess, President of Mindful Meditation Yoga and Vice President FIA, Anu Malhotra, followed by a Welcome address by FIA Chairman &amp; Founder President Sunil Shah, and an eloquent speech by the President FIA-

The Lamp Lighting ceremony was performed by the dignitaries, Sunil Shah, Hitesh Gandhi, Dr Reddy, Dr Murthy, Ajeet Singh, Keerthi Revoori, Vinod Gautam, along with the sacred chanting of the auspicious Sanskrit hymns &amp; mantras by Anu Malhotra, praying for the peace, good health and wellbeing of this entire world.

Blissful Aadi Yogi song performance by soulful singer Anil Jha, filled the atmosphere with Yogic aura. And the inspirational talks by leading voices of Chicago, to non stop Powerful Yoga/ Meditation practice by Anu Malhotra filled the room and the hearts of 100 plus people in attendance with vibrant energy! Appreciation Award Certificates were also presented to the Yoga Teachers Anu Malhotra, Chitra Singh, Yash Chaudhary &amp; Deepti Suri, for their magnificent support towards spreading Peace, Joy &amp; Vibrant Energy in the humanity and making world a better place to live in by their dedicated service.

Humanity by practicing Yoga in our Daily lives!”. FIA President, Hitesh Gandhi, congratulated Anu Malhotra for her dedication towards Yoga and lauded FIA’s continued commitment to bring meaningful events to the community, and promoting awareness about health and wellbeing. This was FIA-Chicago’s 5th Successful event within the last 6 months. Dr Vemuri and Dr Reddy, both mphasized on the positive impact of Yoga on not just the physical health but the mental health of an individual as well. Anu Malhotra, on behalf of FIA-Chicago thanked all the dignitaries and participants for attending the International Yoga Day 2022 Celebration at Mindful Meditation Yoga.

FIA Chicago is a 501 (c)(3) status, non-profit umbrella organization of other Indian Associations in the Chicago land and Midwest representing in excess of 300,000 culturally diverse but united together Asian-Indians. FIA has been actively engaged in serving the Indian American community for the past 12 years and has been instrumental in promoting Indian culture. Last but not the least, FIA greatly appreciates its sponsors and supporters. FIA Media Partners for this event were: Suresh Bodiwala, CEO &amp; Chairman Asian Media.