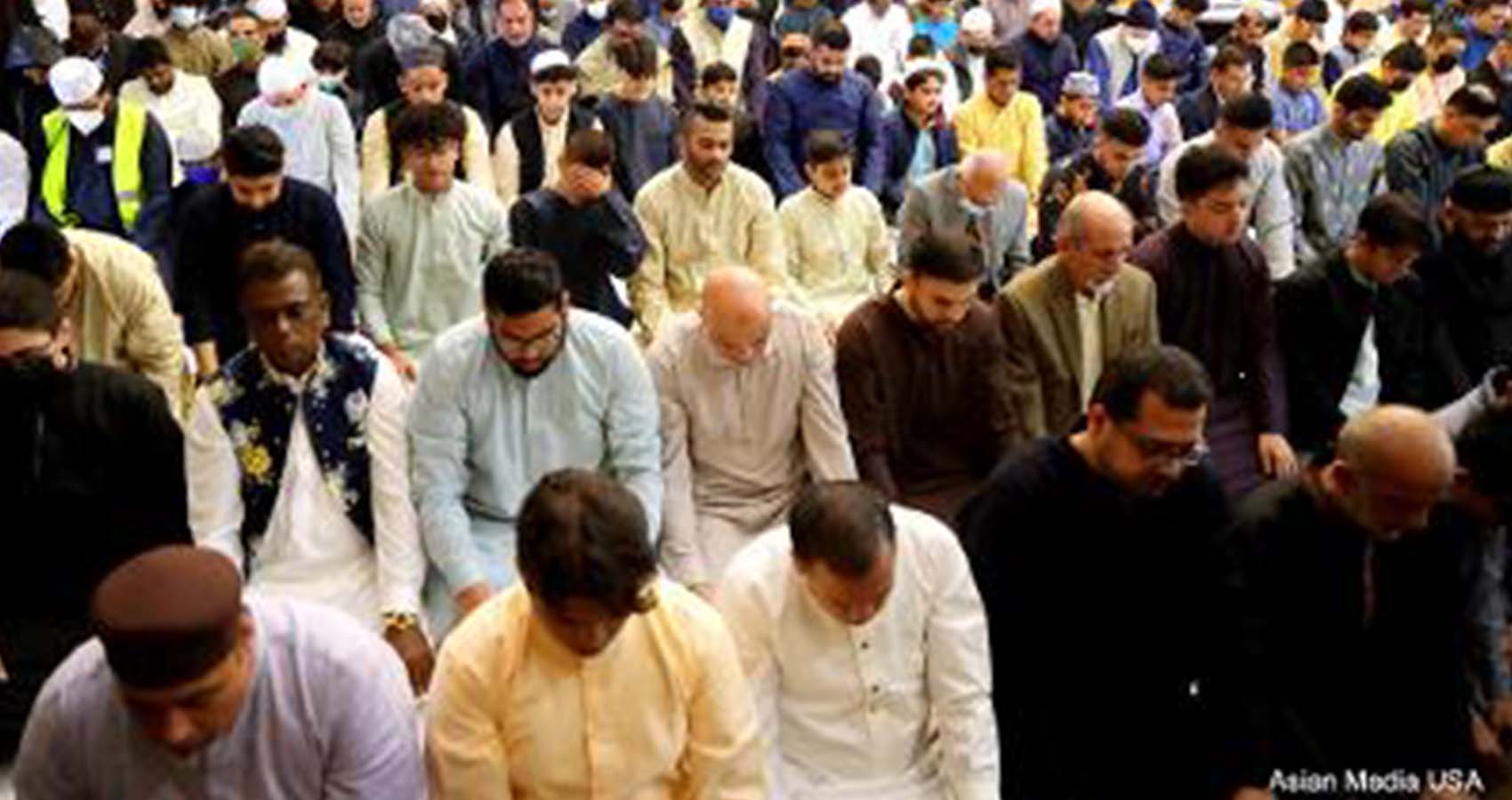 On Monday May 2nd,2022 Muslims from all over the Naperville and suburb areas joyfully bustled into the Embassy suites and two locations of ICN to join the celebrations of Eid Ul-Fitr. While there were various venues that held Eid prayers throughout the region, the largest turnouts were at the Naperville where arrangements for Eid prayers were made by the Islamic Center of Naperville (ICN) in five spells, at 7:30 am, at 8:30 am, 9:00 am,10: 00 am, and at 11:30 am. The Imam for the first session of the Eid prayers was Shayakh Ismail Al-Qadhi, Shayakh Omar Hedroug, for second session, Dr. Abdullah Ansari for the Third session, Shayakh Rizwan Ali for the fourth session and Wali Khan for the fifth session. Over 8000 devout Muslims, including prominent Businessmen, Professionals, and Community Leaders, attended the Eid prayers. 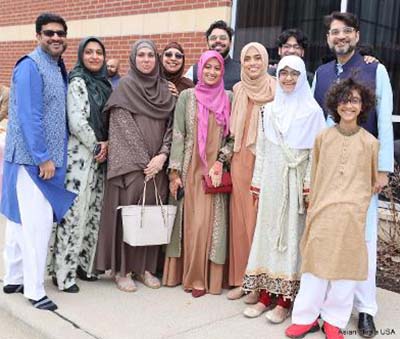 Women in vibrant colored dresses, men in ethnic outfits and children, smiling and laughing, filled the parking lots and poured into all the three locations. Volunteers of the Eid Committee of the ICN open-heartedly welcomed the incoming persons so as to ensure that every one of them was able to partake in the Eid prayers, without any inconvenience. Despite the large numbers, the volunteers of the ICN and board members were able to direct the crowds effortlessly and efficiently.

Imam and Residential Scholar of the ICN, Rizwan Ali, delivered an inspiring talk the peace and tranquility people achieved during the month of Ramadan. This happiness was due to many factors, but he emphasized the importance of leaving sin and being consistent, sincere, and dedicated to continuing the good deeds established during Ramadan. He gave practical ways that people can make fasting, attending the Mosques, reciting the Quran, and giving charity part of their lives even after Ramadan. He also prayed for the volunteers that made Ramadan possible in the community and those who were sick and unable to attend, and those facing difficulties and hardships locally and abroad. He ended by encouraging the congregation to rejoice and celebrate the day of Eid by giving gifts and having fun.

Mr. Kashif Fakhruddin, President, ICN, stated that the month of Ramadan is a blessed month in which the Holy Quran was revealed. He stated that the month of Ramadan is an occasion for spiritual uplifting, softening the heart and humbling oneself, sharing and caring, seeking forgiveness from Allah SWT, extending forgiveness to others, and seeking mercy of Allah SWT and praying for the same to others. “The ICN community, which comprises over 4,500 families, representing heritages from many different countries, addresses the needs of Muslims as well as those who belong to other religions. ICN works very closely with people of other faiths to serve humanity and encourages its members to follow the principles of Tolerance, Justice, Peace and Progress”, added Kashif Fakhruddin.

“The sacred month of Ramadan is a time of sacrifice and reflection. Ramadan offers an opportunity to reaffirm our commitment to peace and justice through the power of faith. Ramadan reminds us that our common bonds far outweigh our differences. I wish everyone a blessed and meaningful Eid-ul-Fitr.  We extend our warmest wishes to the Muslim community of Illinois on this occasion”, said Board members of ICN.