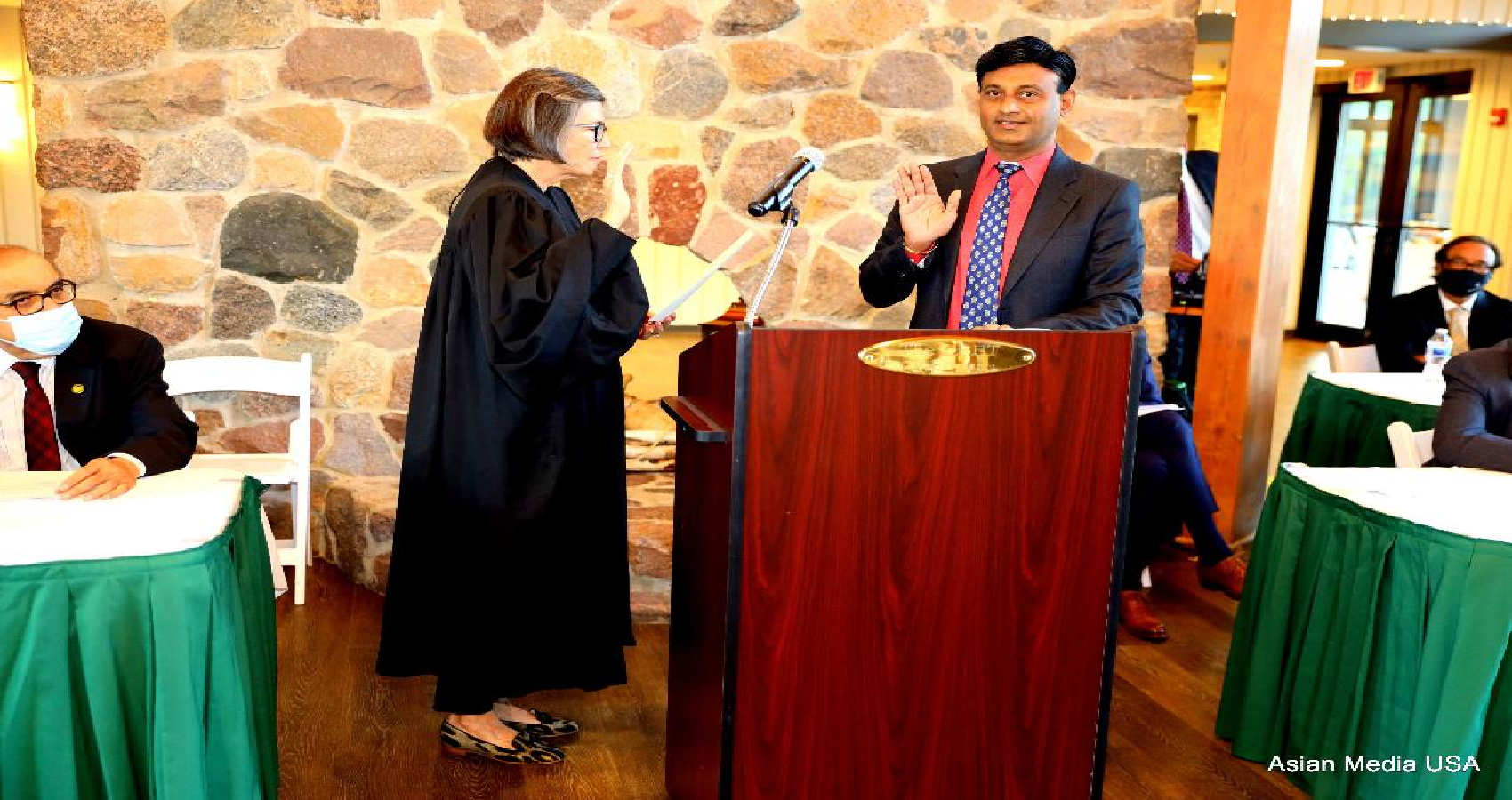 Dr. Suresh Reddy was officially sworn in as a Trustee of Oak Brook during a solemn ceremony held on Tuesday, May 11th  at the Bath & Tennis Club, Oakbrook, IL. Dr. Reddy took the oath placing his hand on the Gita, Quran, Bible, and AdiGranth.

Dr. Suresh Reddy, the Immediate Past President of American Association of Physicians of Indian Origin (AAPI) was officially sworn in as a Trustee of Oak Brook during a solemn ceremony held on Tuesday, May 11th  at the Bath & Tennis Club, Oakbrook, IL. The Honorable Justice Ann Jorgensen, Presiding Judge of the Appellate Court Second District in Illinois, delivered the Oath of Office to the new Trustees of the Village of Oak Brook, as Dr. Reddy took the oath placing his hand on the Gita, Quran, Bible, and AdiGranth.

Attended by family and friends of Dr. Suresh Reddy, the Swearing In Ceremony was livestreamed on the Village’s Oak Brook TV YouTube Channel. The ceremony began with invocation led by Reverend Dr. Daniel Meyer, a graduate of Yale University and both Princeton and Fuller Seminaries. Along with Dr. Reddy, others who were administered the oath included: Trustees Larry Herman and Jim Nagle and Suresh Reddy. The retiring Trustees, John Baar, Phil Cuevas and MoinSaiyed were given official farewell. 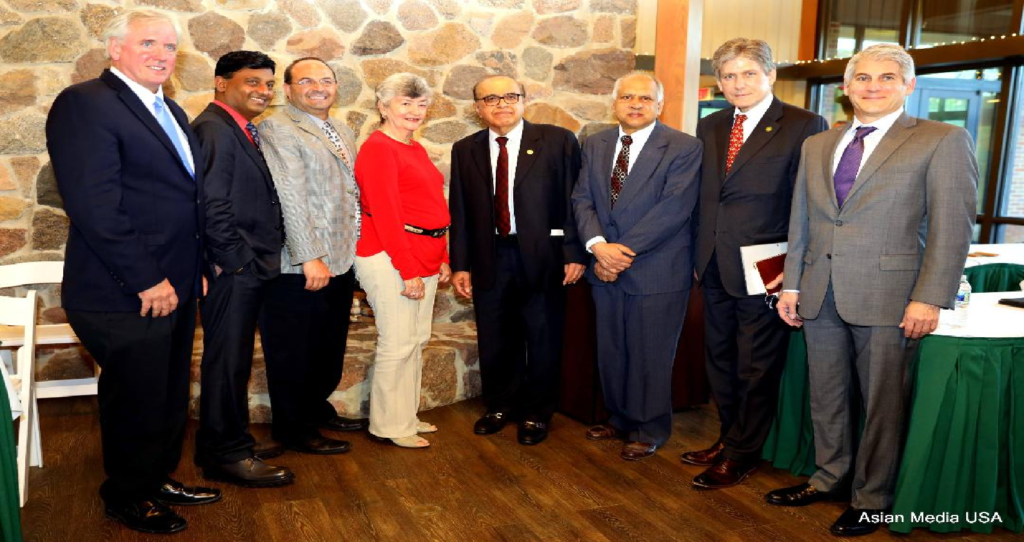 In his acceptance speech, Dr. Reddy said, “As a practicing physician, I will use my training and experiences to ensure that appropriate and effective health policies are approved by the board and implemented by our village staff. There are many expert doctors and medical professionals in our community. I will find ways to engage them through informal work groups or more formal committees if needed to ensure the safety of our residents.”

“I am grateful to the citizens of my hometown Oak Brook  and to the key leaders of Oak Brook, including the sitting mayor and members of the governing body of Oak Brook for endorsing and supporting my candidacy to be a Trustee of Oak Brook,” Dr. Suresh Reddy said. Dr. Reddy thanked Rep. Raja Krishnamurthy, “a good friend” of Dr. Reddy for his best wishes.Present Mayor of Oak Brook Dr. Gopal Lalmalani and Trustee Mr. MoinSaiyed of Oak Brook had strongly supported Dr. Reddy and have endorsed his candidacy, as his leadership skills will benefit the residents of the suburban town in Illinois.

In his presidential address, Dr. Gopal Lalmalani said, “I thank Trustees John Baar, Phil Cuevas and MoinSaiyed for their service and dedication to the Village of Oak Brook. It has been an honor working with all of you in the betterment of Oak Brook.” As the Village Clerk Pruss read out the Resolutions of Appreciation, Dr. Gopal Lalmalani presented them with a Resolution Plaque, Service Pin and an engraved medallion which was designed by Paul Butler.

Dr. Suresh Reddy won the election to be a Trustee of the Village of Oak Brook convincingly at the elections held on Tuesday, April 6th, 2021.  Dr. Reddy along with the other 2 winners, Laurence “Larry” Herman and James P. Nagle had received  “the three highest unofficial vote totals with 100% of precincts reporting in the election for three four-year terms on the Village Board,” Chicago Tribune had reported. Dr. Reddy said he decided to run with Herman and Nagle because he believes the three of them can address the most critical issues impacting the village better than anyone else, each with their own unique skills. 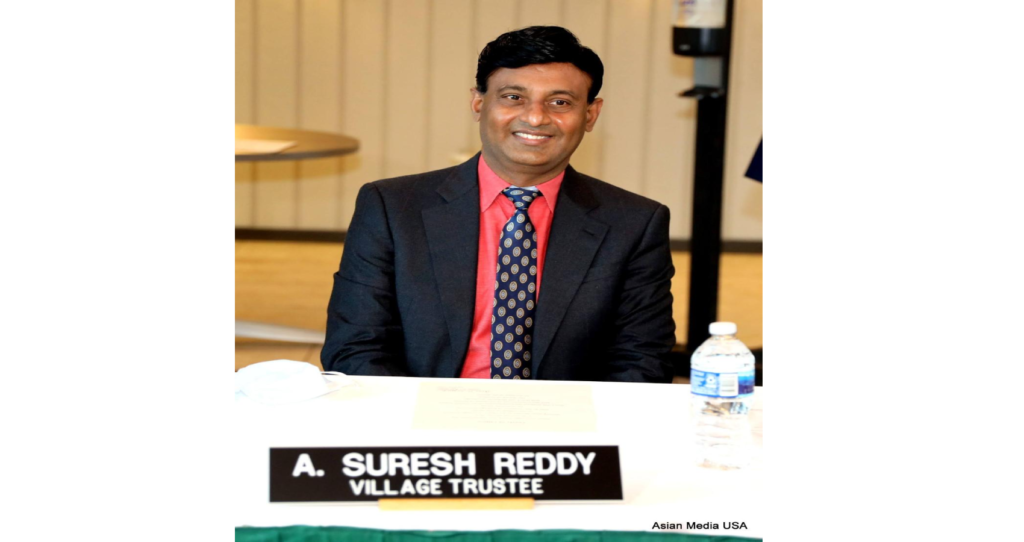 Having a population of nearly 10,000 people, the city of Oak Brook is located 15 miles west of the Chicago Loop and is served by a network of major federal, state, and county roads including the Tri-State Tollway system, the East-West Tollway and the Eisenhower Expressway. One of the affluent communities in the nation, Oakbrook’s adjacent neighbors include the communities of Villa Park, Elmhurst, Lombard, Oakbrook Terrace, Westchester, Westmont, Clarendon Hills, Downers Grove, and Hinsdale.

Dr. Reddy comes with immense experiences and proven leadership. He grew up in the suburbs of Hyderabad in Southern India. A financial conservator, Dr. Reddy always had a passion for “uniting and bringing people together.” Recalling his childhood, the dynamic leader says, “It all started during my childhood with bringing neighborhood kids together to play “gully cricket” and also bringing people together in college to organize events, demonstrations, and educational tours. Bringing opposing parties to the table for resolving issues has always been my strong strength since my schooling days.”

Not being satisfied with his achievements as a physician and leader of the Diaspora Physicians group, Dr. Reddy says, “I always had a strong passion for bringing a positive outlook and giving back to the community. I got involved in several alumni activities and have facilitated to raise funds to build a million dollar alumni educational center for my Alma Mater.”

What motivates him to take on yet another challenging role for the betterment of the community? “My mantra is: If you don’t lead, someone else will lead you. If you don’t pick the right leader, the wrong leader will pick you, and as my good friend US Congressman Raja Says, and if you are not on the table, you will be on the menu,” says Dr. Reddy. 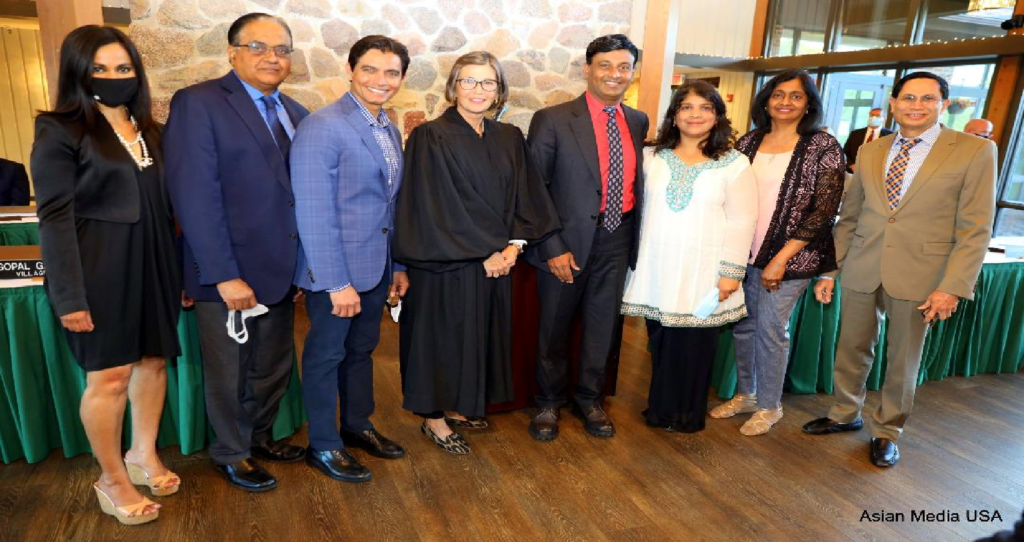 A dynamic leader, Dr. Reddy has devoted a greater part of his life to numerous initiates within the United States , in addition to serving his people back in India, As part of his community service, Dr. Reddy has facilitated and organized numerous health camps and workshops, with special emphasis on CPR  training , obesity prevention in conjunction with Chicago Medical Society.

During the Covid Pandemic, as the President of AAPI, Dr. Reddy facilitated more than a hundred webinars and health awareness events. He facilitated honoring of more than 10,000 nurses who work selflessly in the line of duty against Covid in over 100 hospitals in over 40 states including Alaska. He led a campaign donating blankets to the needy during the last winter and would like to do the same this winter.

Committing himself to ensure and work tirelessly to keep Oak Brook a strong village, living up to its name as a model village around the nation, Dr. Reddy says, “As a Trustee of Oak Brook, I would like to continue and strengthen many programs and services the city offers to all sections of the people. More than ever, fiscal conservatism and wise spending, has become the most important attribute for a financially secure future. I am honored and humbled that the people of my hometown have placed their trust in me and have given me a chance to perform my public service with utmost integrity and dignity to the office.” For more details, please email: [email protected]