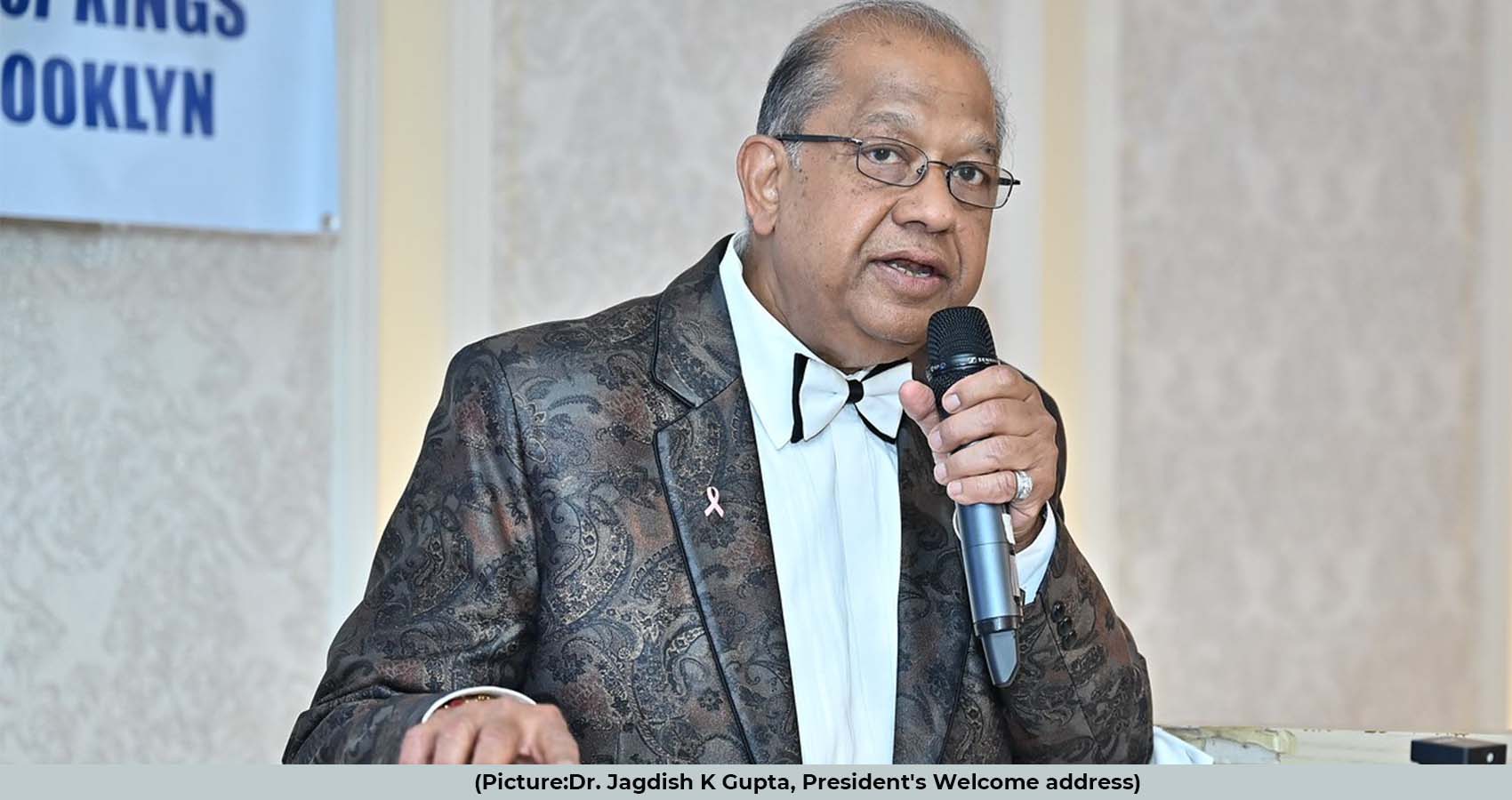 “I am very humbled, truly privileged, and extremely honored to welcome you all to our 201st Bicentennial Stated Meeting by the Medical Society of The County of Kings and the Academy of Medicine of Brooklyn,” said Dr. Jagdish K. Gupta, a committed and highly regarded physician with a history of professional achievement and humanitarian philanthropy, who was inducted as the 174th President of the Medical Society of County of Kings (MSCK) on May 25th, 2022. 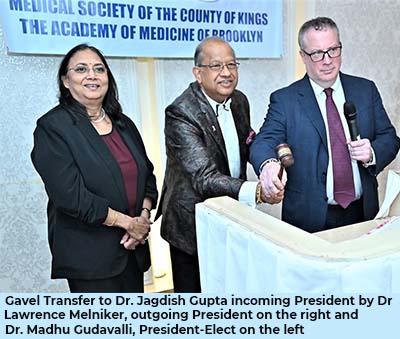 Dr. Gupta was addressing the delegates at the 201st Annual Stated Meeting of MSCK as a Bicentennial Event in person, after two years hiatus due to COVID Pandemic at El Caribe Country Club in Brooklyn, NY with full regalia. “The COVID-19 pandemic upended the rhythms of our personal and professional lives. Traditional workings of our medical society came to a screeching halt,” Dr. Gupta pointed out. “However, as an organization, we persevered, reimagined our operations, and implemented new strategies.  Overall, the organization was renewed and brought into the 21st century.”
Dr. Gupta expressed gratitude to “Dr. Valluru, Dr. Prasad Gudavalli & Dr. Larry Melniker, and everyone in our leadership team for all their hard work during possibly the most challenging time in our organization’s history.”
Dr. Gupta on behalf of the Team 2022-2023,  promised “to continue this progressive transformation. The central focus during my presidency will be to bring harmony to our efforts, empower ourselves to increase membership, enhance membership benefits, create programs for wellness, end disparities inpatient care, and bring equity in healthcare to all, irrespective of caste creed or financial status.” 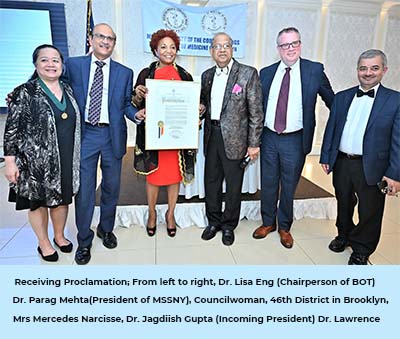 Dr. Sanjiv Chopra, Professor of Medicine and the past Faculty Dean for Continu­ing Medical Education at Harvard Medical School for 12 years, serving as a Marshall Wolf Distinguished Clinician Educator at Brigham and Women’s Hospital, and the author of more than 170 publications and ten books to his credit, was the keynote speaker at the gala. In his address, he pointed out to “The Two Most Important Days: Reflections on Lasting Happiness and Living with Purpose.”  He received a full-throttled standing ovation from the audience. Dr. Chopra is Editor-in-Chief of the Hepatology Section of “UpToDate”, the most widely used electronic textbook in the world subscribed to by more than 1.5 million physicians in 195 countries.
He is a sought-after inspirational speaker across the United States and abroad, addressing diverse audiences on topics related to medicine, leadership, happiness, and living with purpose.
Recognizing the contributions and accomplishments of the Medical Society of the County of Kings, the New York State Assembly commemorated the Bicentennial Stated Meeting of the Medical Society of the County of Kings on May 25, 2022 with a Proclamation sponsored by Assembly Woman Rodneyse Bichotte Hermelyn and Co-sponsored By Assemblyman Michael Tannousis. 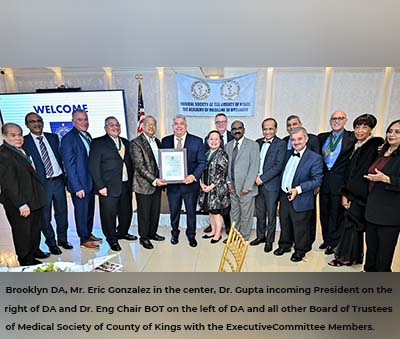 Among the several distinguished guests who joined in and addressed the celebrations were Brooklyn District Attorney Eric Gonzalez who spoke passionately about the need for Gun Control and on ways to prevent the violence in the City. Messages and proclamations were sent in by New York City Council Woman Ms. Mercedes Narcisse 46th Council District; Congresswoman Nicole Malliotakis from 11th District; President of SUNY Downstate Medical School, Dr. Wayne Riley who spoke about the contribution of Medical Society of County of Kings and Long Island College over 200 years; State Assemblyman Michael Tannousis; Dr. Ravi Kolli, President Elect, American Association of Physicians of Indian Origin- the largest ethnic physician organization in America; and, Multiple Citations for 50 years Medical School Graduates serving the Brooklyn Community.
The annual event also highlighted and honored the achievements and outstanding contributions of an impressive and inspirational set of honorees representing 50 years of continuous, diligent, and impartial services to the Brooklyn community. “These 12 esteemed honorees have distinguished themselves in the fields of community service, patient advocacy, medical innovation, and clinical practice. These honored physicians have saved countless lives and brought relief to thousands of patients over the last 50 years.
Their influence extends far beyond those in their direct care.  They have served as role models for numerous students, residents, and fellows for over five decades,” Dr. Gupta pointed out. Reflecting on the last 200 years of the most prestigious professional organization, Dr. Gupta said, “I am amazed at the caliber, intelligence, and forward-thinking ideas of all my great predecessors. They left indelible marks with their achievements and accomplishments in the fields of research, education, innovation in medical and surgical technology, and patient care. I am humbled to follow in their footsteps and am grateful to each of them.” 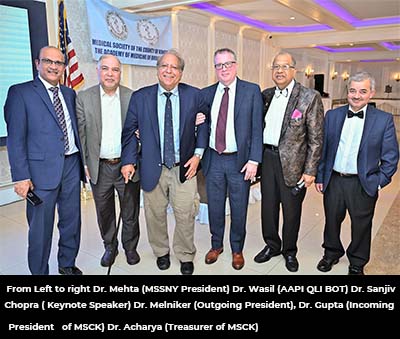 The Medical Society of the County of Kings (MSCK), the oldest scientific organization in Brooklyn, New York was established on March 2nd, 1822 by a group of doctors gathered at Auld Lang Syne Tavern on Fulton Street in Brooklyn Heights, with the lofty mission  “to foster progress in the science and art of medicine and to promote, preserve and enforce the highest of standards of ethical and proficient medical care”. In 1900, the Society opened its grand new colonial revival building at 1313 Bedford Avenue, the geographical center of Brooklyn and It was headquartered there until 1996.
The Society had hosted numerous Scientific Conferences at the McNaughton Auditorium where local, national, and international luminaries in medicine presented important and often original scientific works. The Medical Society grew exponentially to more than 3,500 members by the mid-20th century and according to the Directing Librarian for the Society, for some time boasted as the 5th largest medical library in the country.
The concept of Continuing Medical Education (CME) was developed in Brooklyn in 1922 and the Society published the Brooklyn Medical Journal from 1888 until it was succeeded by the Long Island Medical Journal in 1907. The Medical Society continues to serve the people of Brooklyn through the thousands of practicing physicians in the borough. MSCK through its various committees and in collaboration with other specialty organizations have been supporting Brooklynites for their healthcare needs uninterrupted — through political, economic, and various health crises — over the past 200 years.
MSCK represents the most populous County in the New York State and as such has the largest delegation to the Medical Society of the State of New York (MSSNY). It continues to provide leadership to organized medicine. Following the footsteps of its great predecessors, more than 11 Kings County leaders, who became President of the MSSNY, a matter of great pride for all members of the Society, its past president and current member, Dr. Parag Mehta, has become the first Asian American President of MSSNY on May 21st. 2022.
Born and raised in Hissar, Haryana, India, Dr. Gupta graduated from All-India Institute of Medical Sciences in New Delhi in 1972 with distinction, and after coming to the United States, had his residency and fellowship at Long Island College Hospital (LICH). A diplomat of the American Board of Internal Medicine and the American Board of Gastroenterology, Dr. Gupta is an Assistant Clinical Professor at SUNY Health Science Center in Brooklyn, and has served as a role model and a mentor for a generation of young physicians who aspire to combine his clinical excellence with sensitivity and compassion towards patients and their families.
Dr. Gupta has been serving the Brooklyn Community for the last 45 years. He has been actively involved in Organized Medical Societies leadership at the Kings County and New York state Medical Society level for a long time. Through innovative research exploring the links between gastrointestinal and neurological diseases, Dr. Gupta has made his mark upon medical literature. In addition to his many contributions to peer review journals, he has co-authored chapters in many medical textbooks. As a researcher dedicated to the detection, prevention and treatment of GI disorders including cancer, he has been recognized and awarded numerous teaching awards. He has been on the TOP DOCTORS list of Castle Connolly for more than twenty years, consecutively and also has been designated as SUPER DOC by New York Times magazine for three years.
Dr. Gupta has served as President of the Medical staff of LICH and as a member of its Board of Regents. For his commitment to teaching, professional achievements, community services and leadership, the Long Island College Hospital bestowed the Spring Ball Honoree 2002 Physician of the Year Award upon him. He is currently serving as the Chairman, Board of Trustees of AAPI-QLI, and is very active in National AAPI and AAPI Charitable Foundation and serves on the Board of Trustees and is the Treasurer.

In his desire to serve the Indian American community Dr. Gupta has been a member of the Board of Nargis Dutt Memorial Foundation and has been privileged to serve as its President, fundraising large amounts during his tenure to sponsor many charitable projects in India. He was recognized  for his contributions with a Lifetime Achievement Award in 2006. He has been very actively involved with many community organizations in Long Island. He has served as President of India Association of Long Island (IALI) in 2010. He also serves on the Board of Trustees of the Hindu Center. He has been recognized several times for his outstanding services to the community. Most recently he was appointed an Honorary Police Surgeon for his patriotic dedication to the New York’s finest.  Above all, Dr. Gupta is a loving husband to his wife Meena and father of three children, Drs. Anu, Srishti and Vishal and grandfather to Sia, Kabir, Som and Sai.