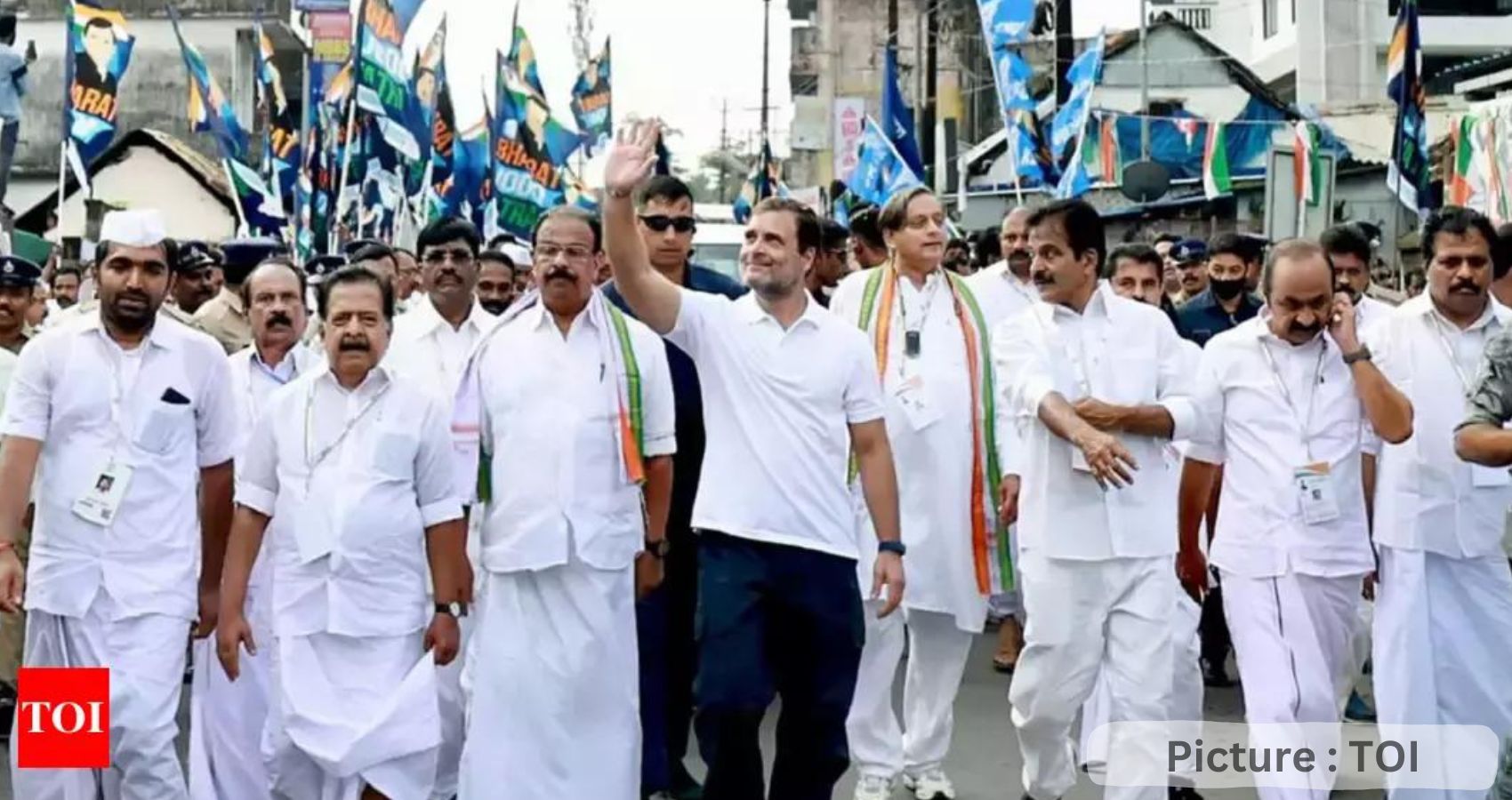 Let me begin by revisiting history. In  2015-16, Mahatma Gandhi journeyed across the length and the breadth of the country. His objective was to understand the real India, its differences in terms of caste, creed and religion. His fight was against the forces of imperialism. More than a century later another individual carrying the same Surname has undertaken another seminal journey.

This time not to understand but to explain the credo of India – an ethos which stands for  harmony, trust and togetherness. His fight is against the forces of imperialism.

Yes, you have guessed it right I am talking about Rahul Gandhi’s ‘Bharat jodo yatra’!

Bharat Jodo Yatra is historic in many ways. It is being undertaken at a time when India is being torn apart by religious strife, when the fault lines between communities have deepened like never before.  The role of all the  4 pillars of democracy – Legislature,  Executive, Judiciary  and Media media has been compromised. The country’s public sector undertakings which have been the  backbone of the country’s infrastructure are being constantly eroded leading to  massive private monopolies and uneven distribution of wealth in the country.

In this chaos when the average Indian is looking for a voice of sanity and peace  Rahul Gandhi has undertaken one of the most strenuous and difficult exercises to assure the oppressed and the marginalised that he is committed to their cause.

I am reminded of a similar exercise undertaken by the late Prime Minister Rajiv Gandhi who had embarked on a satbhavana yatra in 1990  when the nation was battling the scourge of  casteism unleashed by VP Singh’s Naitonal Front and the curse of communalism  cut loose by L.K. Advani’s Rath Yatra!

Rahul Gandhi’s  Bharat Jodo Yatra has immense contemporary relevance  because the country has been divided like never before on the basis of religion, region, caste and creed. It is time for someone to pick up the gauntlet and show the true path of time cherished values which India has always stood for.

Rahul Gandhi’s Bharat Jodo Yatra has been even more challenging  because he is covering the  entire distance from south to north on barefoot. His yatra started from September 7th from Kanyakumari in Tamil Nadu and has so far covered Tamil Nadu, Kerala, Karnataka, Andhra Pradesh, Telangana, Maharashtra and Madhya Pradesh and after covering many more states will culminate in  Srinagar in 2023

A look at his daily schedule will throw light on the gritty  man, his exemplary mission and his brilliant vision. His typical day starts at 5:30 am in the morning and he walks on the common man’s path till 7:30 where he takes a short break for tea. He then resumes his yatra and walks till 10:30-11:30 am where he breaks for lunch and a short rest. He then resumes his yatra from 3 pm to 6pm and has a public meeting or engagement with the people before he breaks for the day.

This exercise has continued despite inclement weather and several impediments in this yatra.

It should be mentioned here that the yatra has showed the people the real face of Rahul Gandhi where he has come across as a very good human being, a caring person who really loves the country for which his family has sacrificed so much including the ultimate sacrifice to the nation by his  father and grand mother. Rahul Gandhi also has shown how fit he is during the course of the yatra as he has never complained of fatigue or any other issues despite the hectic schedule and engagements during the strenuous yatra that involves constant and continuous public engagement and media glare. It is very rare in politics to see a determined and strong person who despite hardships is determined to continue with the yatra that wants to fight the divisive forces of the country and unite the nation.

People from many walks of life  interact with Rahul Gandhi on his bharat jodo yatra and he listens to their views and issues.  His patience is non-pareil and his ability to connect amazing. We see that he gives the same attention to the common man as he gives to any other celebrity who joins him in this historic yatra. Actors, writers, thinkers, spiritual leaders from different religions, school children, daily wage workers, retired Armed forces personnel,  law and order officials, former judges, farmers, students and  others from different walks of life are marching with Rahul in this momentous journey. People like Tushar Gandhi (Great grandson of Mahatma Gandhi) and several intellectuals have reached out to Rahul Gandhi offering their support and encouragement.

This yatra will go down in history as one of the greatest initiatives of a leader who really cared for the country and wanted its citizens to  work together and respect each other’s differences. This yatra will be remembered by generations for the effort and initiative by yet another member of the Nehru/ Gandhi family to come out of their comfort zone and risk their personal security and health for the greater cause of the nation. Let us hope that this will bring a positive and much needed change and unity in the country.

When asked about his mission Rahul Gandhi said, “The spirit of the Yatra is to make the country focus on the attempt to change its nature. This country has never been fearful. Even in the worst of times, India was not scared. The people of India have a particular culture — the culture of compassion, of respect, of affection. You ask anybody — a villager, a billionaire, or the American President — they will say that India’s strength is compassion. You don’t believe it but the objective of the Yatra is not political. It is to remind the people what the true nature of this country is, what the culture and history of the country is, what its DNA is. Where India stands today, if we continue moving on the same path, the country will suffer enormous damage both at the domestic and international levels.”

I admire Rahul Gandhi’s historic initiative of understating the Bharat Jodo Yatra in these difficult times and trying to unite and assure the country under a sane voice.