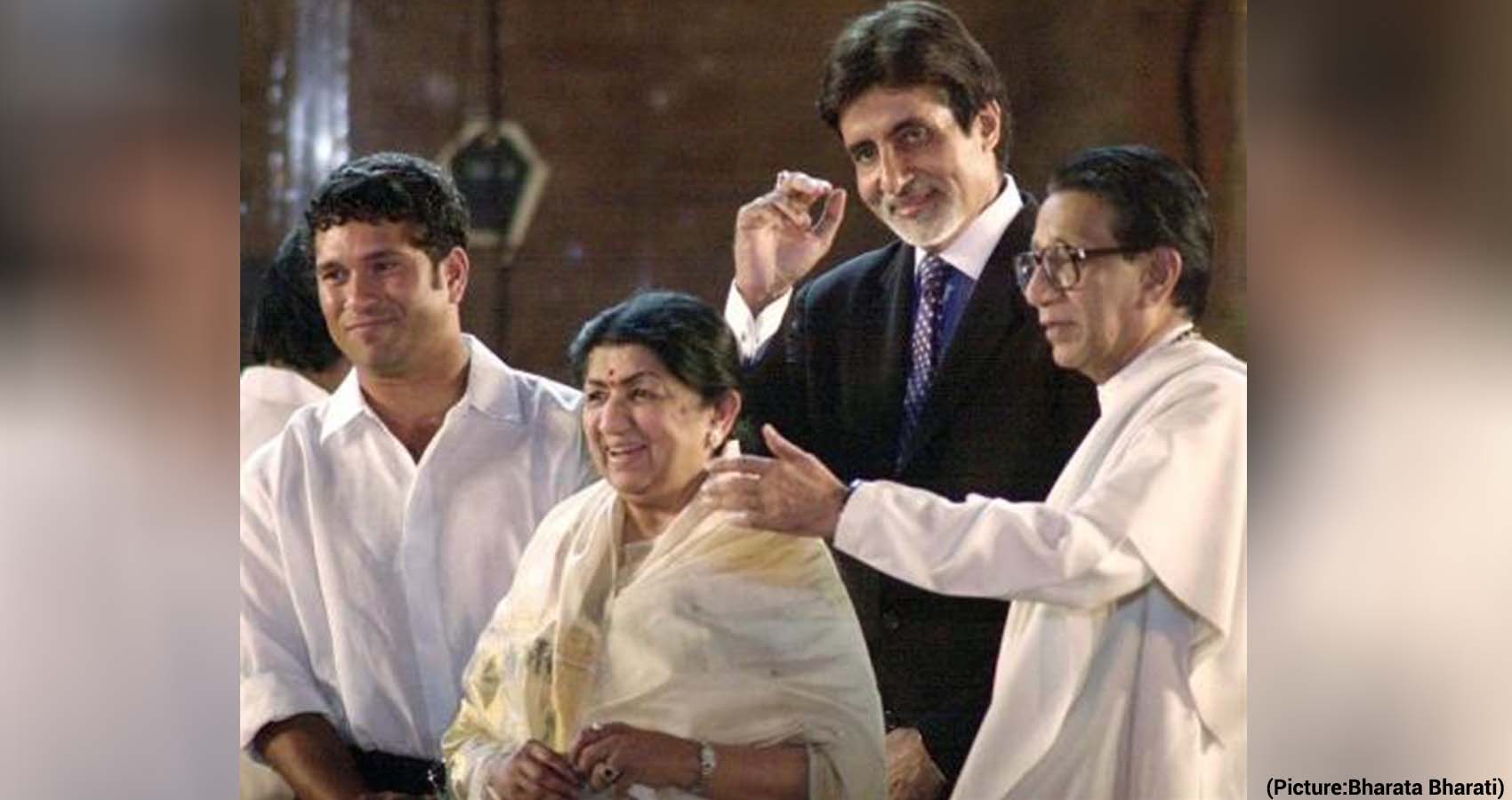 Warbling her way into our hearts with the haunting and ethereal strains of “Aayega Aanewala” in “Mahal” (1949), Lata Mangeshkar became the definitive voice of several generations of Indian film heroines — from Madhubala to Madhuri Dixit, Kamini Kaushal to Kajol, Padmini to Preity Zinta, Sharmila Tagore to Sridevi, and countless others — in a wide range of melodic songs that will reverberate for all ages.

Filling the void left by singing superstars such as Noor Jahan and Suraiyya as a result of emigration or retirement, she overcame what Dilip Kumar once gently mocked as the “dal-chawal” flavour of her Urdu, to achieve perfect diction in that expressive language to fashion magic in the thousands of songs she rendered for scores of gifted music composers and inspired lyricists.

As the inevitable fate of humans stills the golden voice that was long an essential ingredient of a Bollywood film for seven decades, and helped many of these to be successful — Raj Kapoor, till the end of his life, was convinced that it was her absence that made his cherished “Mera Naam Joker” a flop — let us revisit Lata Mangeshkar through her songs for over the years, restricting it to one song per actress.

Even if we keep it to solos, leaving out the duets as far as possible, so as to focus on her superlative voice, which still makes it a tough task, not to mention highly subjective, given the range of her contribution.

Which one for Nutan, for Mala Sinha, for Rekha? Let’s try.

Madhubala: It was through “Aayega Aanewala…”, picturised on this actress, that Lata Mangeshkar’s voice came to the forefront, around seven years after her debut, and the Madhubala-Lata combine went on to produce magical melodies in classics from “Chalti Ka Naam Zindagi” to “Mughal-e-Azam”.

But, given Madhubala’s effervescent screen persona, let us choose the melody that shows her in a hapless and sombre situation, and shows the inclusive nature of Bollywood, and of India, the ‘hamd’ (a song composed in the Prophet’s praise) “Bekas par karam kijiye, o sarkar-e-Madina”, written by Shakeel Badayuni and composed by the illustrious Naushad. 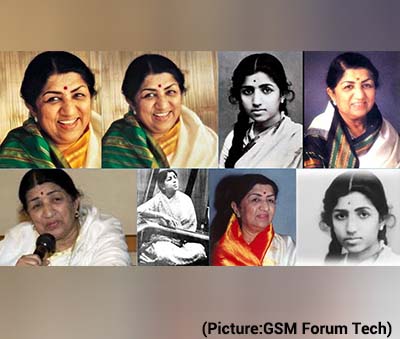 Nargis: Raj Kapoor’s oeuvre had certain constants — himself as the star, Nargis as the heroine, Shankar-Jaikishan for music, Hasrat Jaipuri-Shailendra for the lyrics, and Mukesh and Lata as the voices. But Lata’s contribution to Nargis outspanned the RK banner. “Dil Ke Girah Khol Do, Chup Na Baitho, Koi Geet Gao” with the heroine, paired with the young and debonair Feroz Khan, in a challenging role in a film dealing with mental issues, is one worth listening

Meena Kumari: From “Mohe Bhool Gaye Sawariya” to “Ajeeb Dastan Hai Yeh”, the combination of Meena Kumari and Lata has given several unforgettable melodies to Bollywood. But their defining contribution comes in “Pakeezah”, the swan song of the gifted actress. It is difficult to choose between “Inhi Logon Ne” to “Chalte Chalte”, but it is the challenging “Thare Rahiyo” that showcases both at their best.

Vyjanthimala: While “Hothon Pe Daba Ke Aisi Baat” from “Jewel Thief” could be a strong contender, the success of Bimal Roy’s supernatural “Madhumati” owes a lot to its music, beyond the performances of Dilip Kumar, Vyjanthimala, Pran and Jayant. The duet “Dil Tadap Tadap Ke” is an evergreen melody, or “Chad Gaya Paapi Bichua” have their points, it is “Aaja Re Pardesi” stands out.

Sadhna: The heroine who popularised a new hairstyle had Lata Mangeshkar to thank for the songs that showcased her cinematic prowess, from the classical “O Sajna Barkha Bahar Aayi” to the haunting “To Jahan Rahega, Mera Saaya Saath Hoga”, but it is the haunting “Lag Ja Gale”, with the masterful music of Madan Mohan that will also evoke the impermanence of love and keep both in our memories

Nanda: The graceful actress with her endearing eyes also owes Lata Mangeshkar for the melodies that define her on silver screen, from “Kis Liye Maine Pyaar Kiya” to the “Allah, Ishwar Tero Naam”, but it is the sensuous “Yeh Samaa Yeh Samaa Hai Pyar Ka” that defines their collaboration.

Waheeda Rehman: Again a string of stirring melodies connect the elegant actress to the superlative voice from “Kahin Deep Jale Kahin Dil” to “Rangeela Re”, but it is the exuberant and carefree “Aaj Phir Zeene ki Tamanna Hai”, with that high-powered “Kaaton se kheench ke yeh aanchal” that begins it, seems a strong contender for their best.

Sharmila Tagore: From the soulful “Kuch Dil Ne Kaha” to “Chalo Sajna Jahan Tak”, the dimpled beauty found Lata as her ideal voice, but one of their best can be the full-powered, classical-tinged “Ab Ke Sajan Sawan Mein”, and the hidden affection it showcases.

Hema Malini: Again, from “Tune O Rangeele” to “Mere Naseeb Mein To Hai Ke Nahi”, Lata created magic in the musical sorties of the “Dream Girl”, but the one which stands out due to its setting, music and lyrics is “Ae Dil-e-Nadan” from “Razia Sultan”.

Rekha: While younger sis Asha Bhosle performed the best for Rekha in “Umrao Jaan”, Lata Mangeskhar was not behind for the diva as songs from “O Pardesiya” to “Yeh Kahaan Aa Gaye Ham” to “Aaj Kal Paaon Zameen Par” attest. But it is the rather challenging “Salaam-e-Ishq”, before the point where Amitabh/Kishore join in with that ‘alaap’.

Zeenat Aman: The vivacious, Westernised Zeenat was rather well served by Asha Bhosle (remember the rebellious “Dum Maaro Dam”), but Lata Mangeshkar was never behind as “Jiska Mujhe Tha Intezar” to “Shama Jale Ya Na Jale” show. It was, however, for a deglamourised, rural-dwelling Zeenat in the eponymous title song of “Satyam Shivam Sundaram”, which is a classic.

Dimple Kapadia: For this actress, who ventured into some rather off-beat movies after her comeback but performed with aplomb throughout, it is a toss-up between “Yaara Seeli Sili” from “Lekin” to “Dil Hoom Hoom Kare” from “Rudaali”, with their evocative music a perfect complement to that vigorous voice.

Madhuri Dixit: She was almost four decades younger, but still Madhuri Dixit found Lata Mangeshkar to be her perfect voice as “Didi Tera Devar Deewana” shows. But it is that exuberant “Dil to Paagal Hai” that shows Lata, nearly a septuagenerian then, still had an evergreen voice — as besides Madhuri, she sang for the even younger Karisma too

Kajol: “Yeh Dil Tum Bin Nahi Lagta” was Lata singing for Tanuja in 1968, and over a quarter century later, she was as fresh as she sang “Mere Khwabon Mein Jo Aaye” for her daughter Kajol in the landmark “Dilwale Dulhaniya Le Jaayenge”. Take your pick from any song.

Preity Zinta: When you mix legends like A.R. Rehman and Lata, it will result in sheer enchantment. “Jiya Jale” is a song that stands out in “Dil Se”.

There are so many more — “Ghairon pe Karam Apno pe Sitam” picturised on Mala Sinha — which shows that Lataji could never be faulted on her Urdu pronounciation; “Dil to Hai Dil, Dil Ka Kya Aitbaar Kijiye” on Rakhee; “Tere Bina Zindagi Ko Shikwa Nahi” on Suchitra Sen; “Chori Chori Koi Aaye” on Poonam Dhillon; “Sheesha Ho Ya Dil Ho” on Reena Roy, and so many others that will remain testimony to her encompassing contribution to Bollywood.