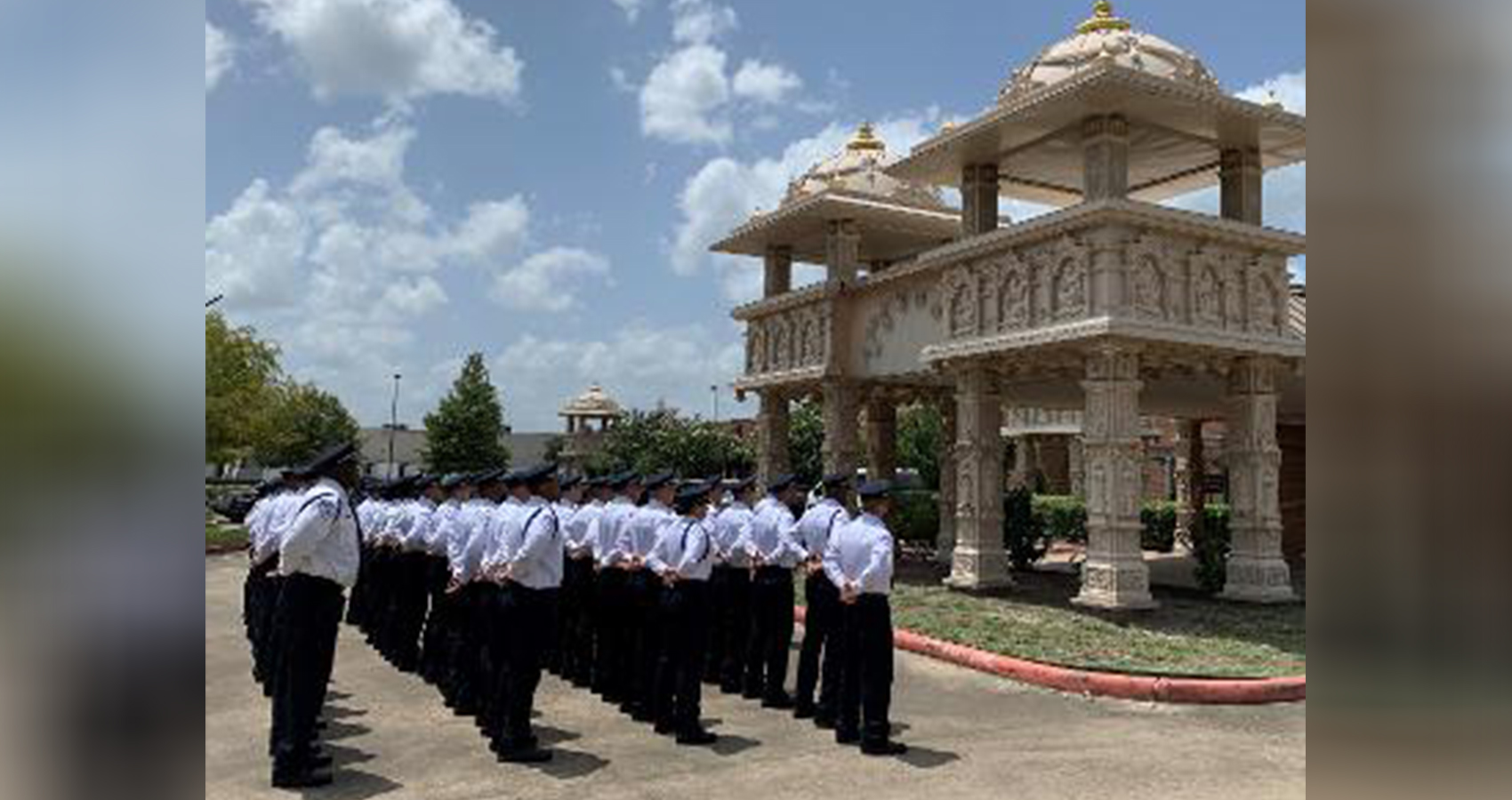 On a warm sunny afternoon of 23rd July, about 60 young cadets of the Houston Police Department (HPD) were introduced to the core principles of Hinduism through a series of presentations and lectures at Vallabh Priti Seva Samaj.(VPSS) As the  Greater Houston area is one of the most culturally diverse communities in the US, it was a much needed introduction to the Hindu faith and a huge step forward to help understand and support the members of the community they serve. This unique engagement with the HPD was initiated by the Hindus of Greater Houston (HGH).  HGH Director Manisha Gandhi led the initiative with the keen involvement of Senior HPD Officer Danish Hussain.

After welcoming the cadets and inviting the distinguished guests to the dais, VPSS Trustee and HGH Advisor Rasesh Dalal kicked off the day’s proceedings with a presentation that covered many aspects of Hinduism including the customs and rationale behind each of those customs. Observing the fact that Hinduism is better defined “as a way of life than a religion,” Rasesh also explained the Hindu philosophy of karma – one’s life being an eternal circle with good deeds in the current life that lead to a better re-birth in the next life. He also highlighted how Hindus receive and treat guests at home; how people respect the premises by leaving the shoes outside the home before entering and the practice of wearing gold jewelry on social and religious occasions. The essence of Hinduism, he added, is the same of all true religions – Bhakti and genuine compassion for all beings.

HGH President Thara Narasimhan congratulated the cadets on joining such a noble profession and noted that over the last 40 years, the community has become very diverse. She also emphasized the fact that India itself is very diverse with people following different customs including dressing styles. This, in turn, makes it the very nature of Indians to respect other cultures and customs. She offered the services of HGH to the cadets at any point should there be such a need and concluded her address by requesting HGH and its members to pray for the cadets’ success in their careers.

Manisha Gandhi wrapped up the event with the vote of thanks. She thanked HPD for taking the time to learn more about Hinduism and Hindus in Houston and VPSS for providing the venue for such an initiative. She also thanked Officer Danish Hussain for playing an active role in arranging the event and closed out the day’s proceedings with a brief explanation of the meaning of Namaste – the gesture is an acknowledgment of the soul in one by the soul in another.

Several interesting questions came up at the Q&A session. HGH Director Somansh Agarwal remarked that in case of any doubt, HPD officers can contact the HGH President at [email protected] or through Manisha Gandhi, to help them out with any issues, as and when needed. ” The cadets who attended the presentation at VPSS will be graduating in October 2021.

Hindu Policy Research and Advocacy Collective (HinduPACT), an initiative of World Hindu Council of America (VHPA) and  Global Kashmiri Pandit Diaspora (GKPD) co-hosted members of the Kashmiri and Afghan Diaspora communities on Capitol Hill in an event titled “Kashmir: Moving Forward in a Dangerous Zone,” on July 29, 2021 to kick off the two-week initiative – #KashmirForward. The event coincided with the historic visit to India by US Secretary of State Anthony Blinken, who held consultations with Prime Minister Narendra Modi and Foreign Minister S. Jaishankar.

Congressional staffers, NGO leaders, and media personalities heard first-hand accounts of the detrimental impacts of terrorism felt in the region, due solely to the growing presence of radical Islamist occupiers supported by Pakistan’s military and intelligence apparatus.

Not all was doom and gloom. The event primarily commemorated the second anniversary of the removal of the temporary provisions of Article 370 and 35A, dating back to 1954. This monumental act of Parliament on August 5, 2019, led by Prime Minister Narendra Modi, enabled the Government of India to apply the full scope of its Constitution to the entirety of the country for the first time since the founding of the modern-day Republic.

For the first time in India’s almost 75 years of existence, the people of Jammu and Kashmir have the right to free and compulsory education. This action upheld equal-opportunity employment to members of the LGBTQ+ community. The repeal of Article 370, opened up the ability of all women, irrespective of their ethnic background, equal inheritance rights in marriage, as is guaranteed by the Constitution of India, in the rest of the country.

This action thus guaranteed equal rights to all citizens of India while freeing the state from the clutches of terrorist warlords. It finally empowered the poorest and marginalized sections of society (namely minority non-Muslim communities) in the state with job restitution and whistleblower protection, which they had been long been denied.

Over the past two years there has been a 40% decrease in cases of terror attacks in Jammu and Kashmir. Speakers at the event provided their real-life experiences to contrast this with the situation in the broader region, as the conflict between the US-backed government of Afghanistan and the Pakistan-supported Taliban has escalated dramatically after our withdrawal just in the last two weeks.

There was a flurry of social media activity as the event progressed under the hashtag #KashmirForward, with members of the audience, popular influencers, and the Kashmiri and Afghan diaspora communities posting about the event and their own lived experiences