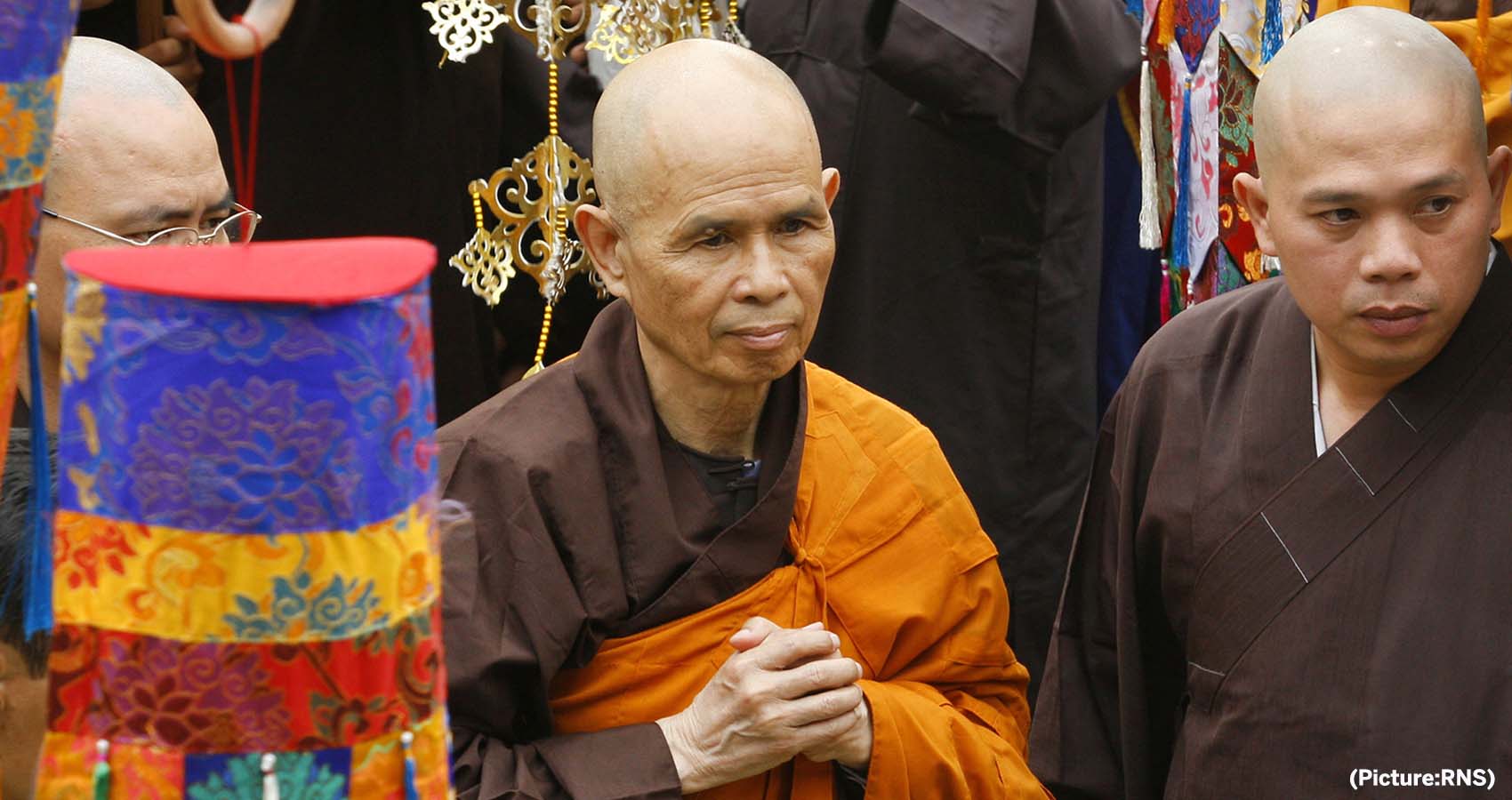 Thích Nhất Hạnh, the Zen monk and long-time Vietnamese political exile who was a prominent global Buddhist spiritual leader renowned for his advocacy of individual responsibility for such worldly concerns as the environment and nonviolence, has died.

Called Thay, “teacher,” by his followers, he died Saturday (Jan. 22, Vietnam time) in his room, at his temple. He was 95. His death was announced by Plum Village, his organization of monasteries.

He had been in declining health and returned to Vietnam three years ago, expressing a wish to spend his remaining days at his root temple, Tu Hiếu Temple, in Hue.

“I would describe him as the second most famous Buddhist in the world, after the Dalai Lama,” said Donald S. Lopez Jr., a University of Michigan scholar of Buddhism.

Melvin MacLeod, editor of the leading Buddhist magazine “Lion’s Roar,” added: “He was thoughtful and wise, yet in person came across as an ordinary person. That in itself is extraordinary when talking about an extraordinary spiritual being and leader.”

Thích Nhất Hạnh suffered a massive stroke in 2014 that left him partially paralyzed and unable to speak. In late September 2020, rumors circulated that he was in rapidly declining health and near death; there were even reports he had died. 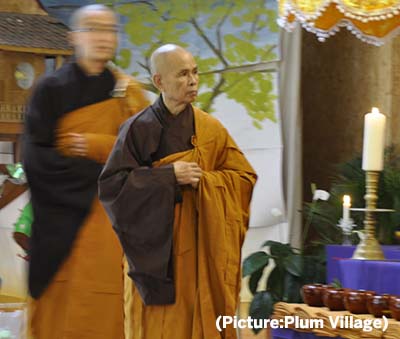 Top aides countered the rumors but admitted he was notably weaker. In 2018, Thích Nhất Hạnh returned to Tu Hiếu Temple where, at age 16, he had become a novice monk. He called it his “final homecoming.”

He spent 39 years in exile from Vietnam because of his pro-peace advocacy that put him in conflict with the policies of both the Vietnam War’s North and South Vietnam governments. He also criticized United States involvement in the war.

Not until 2005 did the Vietnamese government allow him to return to his homeland for a visit. When he did, he said, “There is no religion, no doctrine higher than brotherhood and sisterhood.”

In exile, Thích Nhất Hạnh established the Plum Village network of monastic centers, the largest of which is in southwest France, near Bordeaux. He spent much of his time there when not traveling the world for lectures, conferences and other public engagements.

Today, Plum Village France is the largest Buddhist retreat center in Europe and home to some 200 monks and nuns. Prior to the coronavirus pandemic, it also hosted tens of thousands of visitors annually who came for retreats, workshops and other short stays.

Seven other Plum Village centers (not all named Plum Village) are in Germany, Australia, Thailand, Hong Kong and the United States (in Escondido, California; Batesville, Mississippi; and Pine Bush, New York). Plum Village is reportedly the world’s largest global Buddhist monastic network, according to its website.

The author of more than 130 books of prose and poetry, 100 or so in English, his approach dovetailed nicely with what is now known in the West as mindfulness — the popular, self help-oriented Buddhist meditation practice that has gained broad mainstream acceptance, from corporate boardrooms to church basements.

“Mindfulness,” he said, “is above all the capacity to simply recognize an object (thought pattern) without taking sides, without judging and without craving or despising that object.”

In 2011, he addressed more than 500 Google workers at the internet giant’s California headquarters. He was invited back in 2013 to lead A Day of Mindfulness, which was attended by more than 700 employees, his official biography notes.

However, he was perhaps best known as a contemporary advocate of the now-widespread activist movement he named Engaged Buddhism.

While credited with coining the term, Thích Nhất Hạnh was quick to note that the concept promoting individual action to create positive social change was traceable to a 13th-century Vietnamese king who abdicated his throne to become a monk.

Historically, for many ethnic Buddhists the religion has traditionally been about gaining personal merit to ensure a favorable rebirth, or reincarnation. Engaged Buddhism, by contrast, seeks to apply meditative insights and other teachings about how to act toward others and the world in ways that reduce social, political, environmental and economic suffering.

“Meditation is not to escape from society, but to come back to ourselves and see what is going on,” Thích Nhất Hạnh said. “Once there is seeing, there must be acting. With mindfulness we know what to do and what not to do to help.”

For example, a traditional Southeast Asian Buddhist might be inclined to donate money for construction of a village temple to house monks and for ritual functions to gain personal merit. Engaged Buddhism instead might favor contributing to a soup kitchen to feed a hungry general population.

For many contemporary Westerners disenchanted with their birth religions but still steeped in the Abrahamic faiths’ association of “justice” with the social good, Engaged Buddhism was a natural psychological and political fit, lifting its popularity.

Born Nguyen Xuan Bao in central Vietnam in 1926, as a young bhikshu, or monk, in the early 1950s Thích Nhất Hạnh became active in a reform effort to renew Vietnamese Buddhism for a modern age.

He was one of his tradition’s first monks to study a secular subject at a Saigon university. He was also one of the very first monks, according to his official biography, to ride a bicycle publicly — at the time a revolutionary act for a renunciate in his tradition.

When war came to Vietnam, monks and nuns were confronted with deciding whether to adhere to their traditional, strictly contemplative and monastic lifestyle or to help those suffering in the war.

Thích Nhất Hạnh chose to do both, founding the Engaged Buddhism movement, a term he first used in his book, “Vietnam: Lotus in a Sea of Fire” (1967). Thomas Merton, the late Roman Catholic monastic, wrote the book’s foreword.

Thích Nhất Hạnh also studied and lectured at Princeton Theological Seminary (1961) and, later, at Columbia University. Over the years, he also led retreats for members of the U.S. Congress and their families and addressed the parliaments of the United Kingdom and India.

Lopez, the Buddhism scholar, said that Thích Nhất Hạnh’s time at Princeton and Columbia in the early 1960s was “crucial” to his activism because it allowed him to experience the civil rights movement firsthand, before returning to Vietnam, “which was bursting into flames,” Lopez wrote in an email exchange with Religion News Service. “His political activism, and Engaged Buddhism, began then,” Lopez wrote.

Thích Nhất Hạnh returned to his homeland in 1963, plunging into the nation’s anti-war movement. He also taught Buddhist psychology at Vạn Hanh Buddhist University in Vietnam.

In 1966 he again traveled to the U.S. to lead a symposium in Vietnamese Buddhism at Cornell University. It was during this visit that he met Merton at his home at Gethsemani Abbey in Kentucky. When the South Vietnamese regime threatened to block his reentry to the country, Merton published an essay of solidarity, “Nhat Hanh is my Brother.”

That same year Thích Nhất Hạnh also met with the Rev. Martin Luther King Jr. and urged him to publicly denounce the Vietnam War, which King later did.

King nominated Thích Nhất Hạnh for the 1967 Nobel Peace Prize. In his nomination, King said, “I do not personally know of anyone more worthy of (this prize) than this gentle monk from Vietnam. His ideas for peace, if applied, would build a monument to ecumenism, to world brotherhood, to humanity.” The Nobel committee did not award a Peace Prize that year.

“Thay was a highly educated modern person,” MacLeod told Religion News Service. “His teachings were very deep and also very wide, and his own life was a great example. He was one of the great spiritual teachers of his time.”

On his 80th birthday, Thích Nhất Hạnh was asked if he might ever retire. He replied: “Teaching is not done by talking alone. It is done by how you live your life. My life is my teaching. My life is my message.”