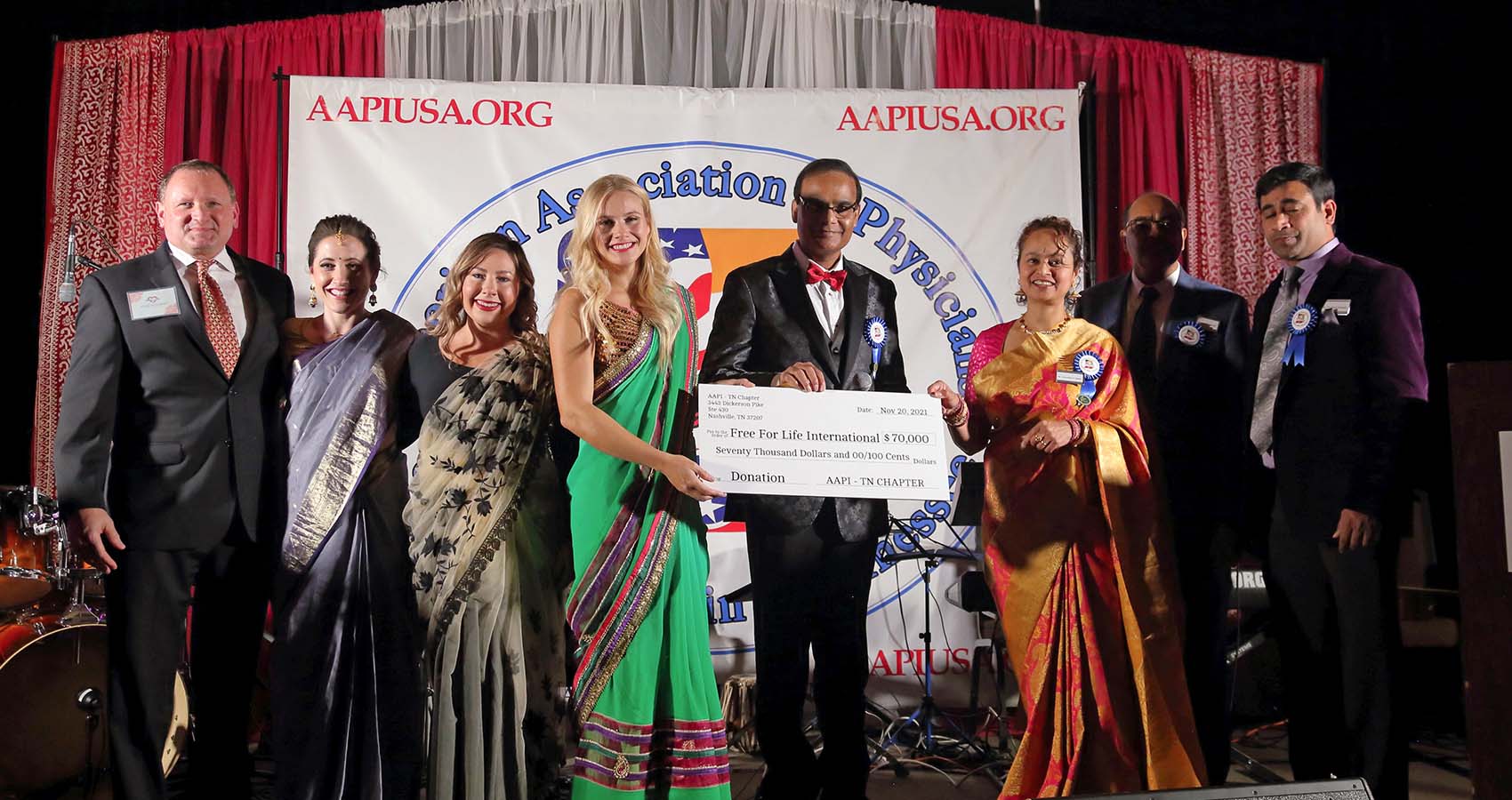 During the American Association of Physicians of Indian Origin (AAPI) Fall Governing Body Meeting, a Fundraiser gala was held on November 20th, 2021 at Embassy Suites by Hilton in Franklin TN, Suburbs of “Music City” Nashville, TN. 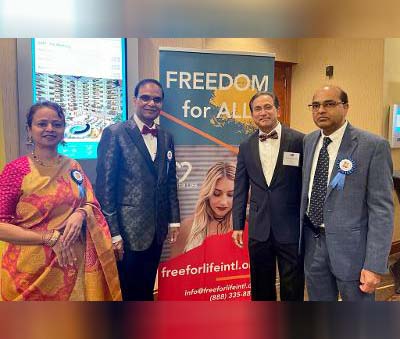 The host chapter- AAPI-TN presented FFLI with a fundraised $75,000, in order to help strengthen the efforts to end human trafficking and to help continue and expand their impact in India.

While pointing out that Human Trafficking is one of the fastest growing criminal industries in the country, reported in all 50 states of the United States of America, “we as a community have a duty to end the various forms of slavery,” AAPI Tennessee Chapter President, Dr. Anuradha P. Mann said. “With the goal of supporting Nashville nonprofit FFLI (Free for Life International). FFLI works in prevention along with rescue, restoration, rehabilitation and education of trafficked victims, we are pleased to present this token of our appreciation to help support the efforts of FFLI,” she added.
The opening ceremony was symbolic, especially with the recent celebration of Diwali, and tied back to the soulful mission of FFLI. Gabrielle Thompson, FFLI CEO and Executive Director and Board Member Radha Babu addressed the audience, describing the impact of fighting human trafficking in India. 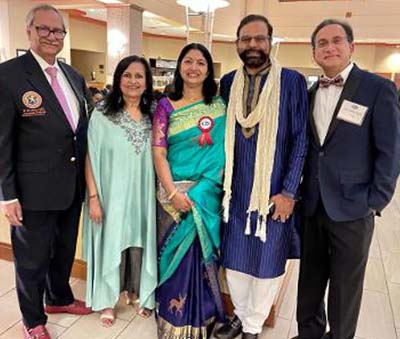 The underlying theme of Diwali, celebrating Light over Darkness, Victory of Good over Evil and Knowledge over Ignorance, which has caught up the attention of people all over the world, was done as the traditional lamp was lit by AAPI-TN Executive Committee, AAPI USA President Dr. Anupama Gotimukula, Congressman Jim Cooper and Grand Sponsor Dr. Bharat Sangani.
The audience was in awe of FFLI’s work and mission. In his keynote address, Congressman Jim Cooper from Nashville highlighted the numerous injustices that intersect with human trafficking and exploitation, along with the urgent need for action at the state, national, and international levels.
In her address, Dr. Anupama Gotimukula, President of national AAPI highlighted some of the major achievements of AAPI under her leadership in the past five months ever since a new executive committee assumed charge of AAPI in July this year. 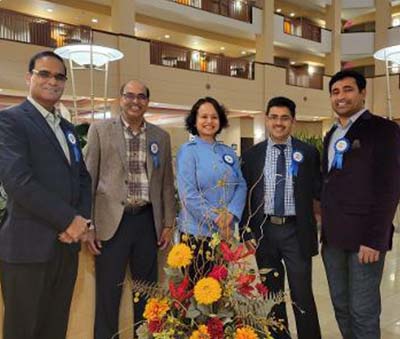 Evolving to meet the growing needs of its members and the larger population it is called to serve, AAPI, the largest ethnic physician organization in the United states, representing over 100,000 Indian American Physicians, has grown steadily and is recognized by the authorities, local communities and mainstream media for the many noble initiatives AAPI has led, especially during the Covid pandemic, she said.
She reminded AAPI members that, as part pf the upcoming Global Healthcare Summit, AAPI has initiated preventive healthcare screenings in 75 villages to understand the concept of preventive screenings help to diagnose any silent diseases which are causing premature deaths from Coronary heart disease and cancers like Breast cancer, cervical cancer which are preventable if diagnosed early through these annual screenings as mentioned above.
Dr. Satheesh Kathula, secretary of AAPI and treasurer of gala applauded the efforts of “ free for life” who are committed to curtail human trafficking and said “we are very glad to be part of the cause”. He thanked all the sponsors and the gala committee for their hard work in making this happen. 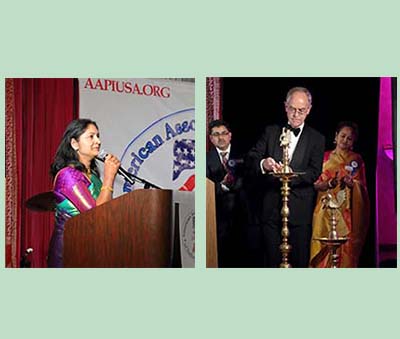 During the CMEs, several important topics with recent advances were well received by the AAPI fraternity. Themes for the CMEs included: ‘Cancer therapy: Advancement as we head for a cure’ by Dr. Nishitha Reddy, ‘Psychiatric sequelae of human trafficking’ by Dr. Sricharan Moturi, ‘Cardiovascular disease in South Asians- (Masala Study)’ by Dr. Ramya Suryadevara and ‘Stem cell therapy: The future of medicine’ by Dr. Sai Ram Atluri. The CME was well-attended, with active engagement between speakers and moderators (Dr. Amit Keswani, Dr.Varun Dhulipala, Dr. Biliyar, and Dr. Gunuganti. Attendees were eligible for 3 Category 1 CME hours, accredited by the Chicago Medical Society (CMS). 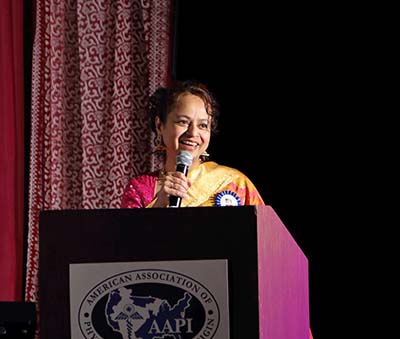 The gala began with the Event Chair Dr. Sunil Kaza welcoming community members, family, friends, colleagues and sponsors.  “We, AAPI- TN team, worked hard to stick to the mission of AAPI, for education and charity to serve humanity. We thank each and every member that attended and supported the event. Our special thanks to all our Sponsors,” said Dr. Sunil Kaza, Chair of the Gala Committee. The Grand sponsor for the event, Dr. Bharat Sangani attended the meeting personally.
Attended by over 150 AAPI delegates from around the nation and more than 250 local members, the weekend event was packed with activities including Business Meet, “warm meet and greet” with local AAPI TN members, CMEs, fun-filled impromptu ‘Mehfil’ led by Dr. Amit Chakrabarty, Gala and Dinner. After a delicious dinner during gala, the participants were entertained with a live music, provided by ‘Geetanjali’ and the ‘SaReGaMa’ orchestra from Chicago. Several past Presidents of AAPI attended praised this event as ‘one of the best’ they have attended. AAPI’s BOT Chair Dr. Kusum Punjabi and other Board of Trustees attended and graced the event. AAPI-TN Chapter donated $10,000 to the National AAPI’s Endowment Fund.
Share the Story :