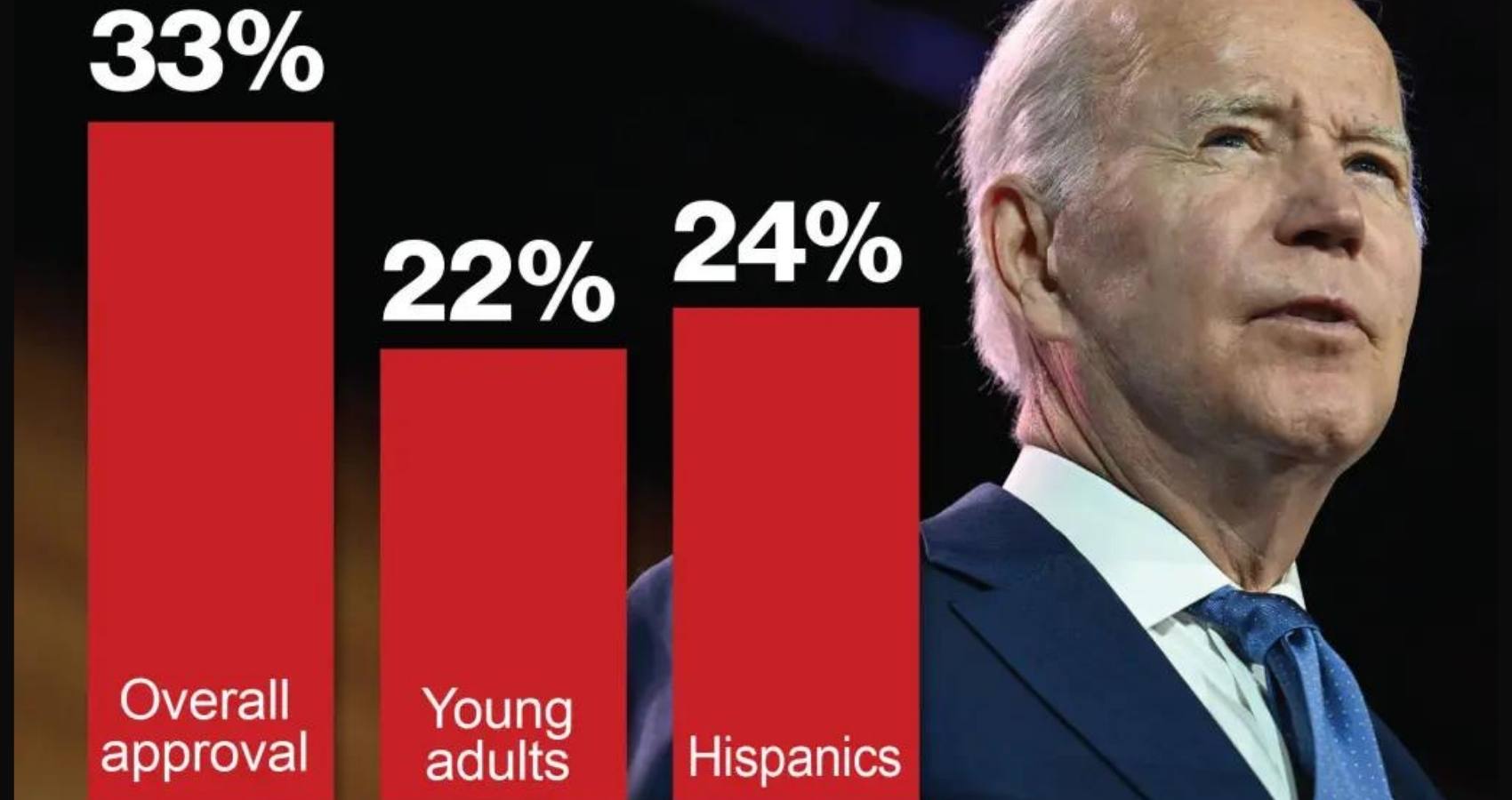 The summer of 2022 is a season of deepening and widespread discontent, according to a new CNN poll conducted by SSRS. The survey finds the public’s outlook on the state of the country the worst it’s been since 2009, while its view on the economy is the worst since 2011. And nearly 7 in 10 say President Joe Biden hasn’t paid enough attention to the nation’s most pressing problems.

Biden’s approval rating in the poll stands at 38%, with 62% disapproving. His approval ratings for handling the economy (30%) and inflation (25%) are notably lower. Rising costs are a primary economic pressure for most Americans: 75% call inflation and the cost of living the most important economic problem facing their family. Last summer, that figure stood at 43%.

With midterm elections approaching, the poll finds no indication that Biden’s standing with the public is improving — and among some critical constituencies, it is worsening. Among Democrats, for example, Biden’s approval numbers have softened by 13 points since the spring (from 86% in a late April through early May poll to 73% now), while his numbers among independents and Republicans have held about even. Biden’s approval rating among Democrats for handling the economy is also on the decline (62% approve, down from 71% this spring). And on inflation, it is barely above water (51% of Democrats approve, 47% disapprove).

Among people of color, 45% now approve of Biden’s overall performance, down from 54% in the spring. That decline includes a 6-point dip among Black adults and a 9-point decline among Hispanic adults. Biden’s approval ratings for handling the economy and inflation now break negative among Black adults, who have been among the President’s strongest backers (47% approve and 52% disapprove on the economy, while 34% approve and 65% disapprove on inflation).

Few Americans who approve of Biden’s overall performance say they do so strongly. Overall, just 12% strongly approve of the way Biden is handling the presidency compared with 43% who say they strongly disapprove of his work. Only 28% of Democrats strongly approve, while among Republicans, strong disapproval is nearly universal at 84%.

The public’s perceptions of the economy and of how things are going in the country overall are deeply negative and worsening. Since the spring, the share saying things are going badly for the country has climbed 11 points to 79%, the highest since February 2009, and shy of the all-time worst reached in November 2008 by just four points. That shift comes largely among Democrats. Just 38% of Democrats now say things are going well in the country, down from 61% this spring. Likewise, there’s been a steep drop among people of color, from 41% saying things were going well in the spring to 27% now.

Only 18% of Americans describe the nation’s economy as in good shape, while 82% say economic conditions are poor. About 4 in 10 (41%) describe the economy as “very poor,” up 11 points since the spring and nearly doubled since December. As some economists warn of a looming recession, most Americans think the country is already there. The poll finds 64% of Americans feel the economy is currently in a recession, higher than the shares who said so just ahead of the Great Recession (46% felt that way in October 2007) and a recession that began in 2001 (44% said the country was already in a recession in February ’01). Majorities across parties say the country is already in a recession, including 56% of Democrats, 63% of independents and 76% of Republicans.

Asked to name the biggest economic problem facing their family today, 75% call out an issue related to the cost of living or inflation, including 38% who mentioned inflation and rising costs generally, 29% who mention gas prices, and 18% who mention the cost of food. All of those figures have increased sharply since last summer. One poll participant said, “Prices on everything just keeps getting higher and higher. is it going to stop?” Another said, “I work 40+ hours and can barely afford to survive. With the price of gas and price of food so high, I don’t see how anyone can have extra money to do anything other than work.” And a third participant said, “Inflation causes so much pain with everything we buy and everything we do.”

While the public’s attention has shifted sharply to inflation, few think the President’s focus has followed. In the poll, 68% say Biden has not paid enough attention to the country’s most important problems, up from 58% who said so last November. That outpaces the previous high in CNN polling saying a President’s attention has been misplaced (59% saying Donald Trump hadn’t paid attention to the most important problems in late summer 2017).

The poll finds Biden’s approval ratings for handling immigration (39%) and the situation in Ukraine (46%) outperforming those for economic issues, but majorities disapprove on both issues.

The survey also suggests both the President’s and vice president’s personal favorability has taken a hit. A year and a half ago, just before their inauguration, 59% held a favorable opinion of Biden and 51% had a favorable view of Kamala Harris. Now, those figures stand at 36% and 32% respectively. Meanwhile, the public’s view of first lady Jill Biden is mixed: 34% have a favorable opinion, 29% unfavorable and 37% are unsure how they feel about her.

The new CNN Poll was conducted by SSRS June 13 through July 13 among a random national sample of 1,459 adults initially reached by mail, and is the third survey CNN has conducted using this methodology. Surveys were either conducted online or by telephone with a live interviewer. (Courtesy; www.cnn.com)