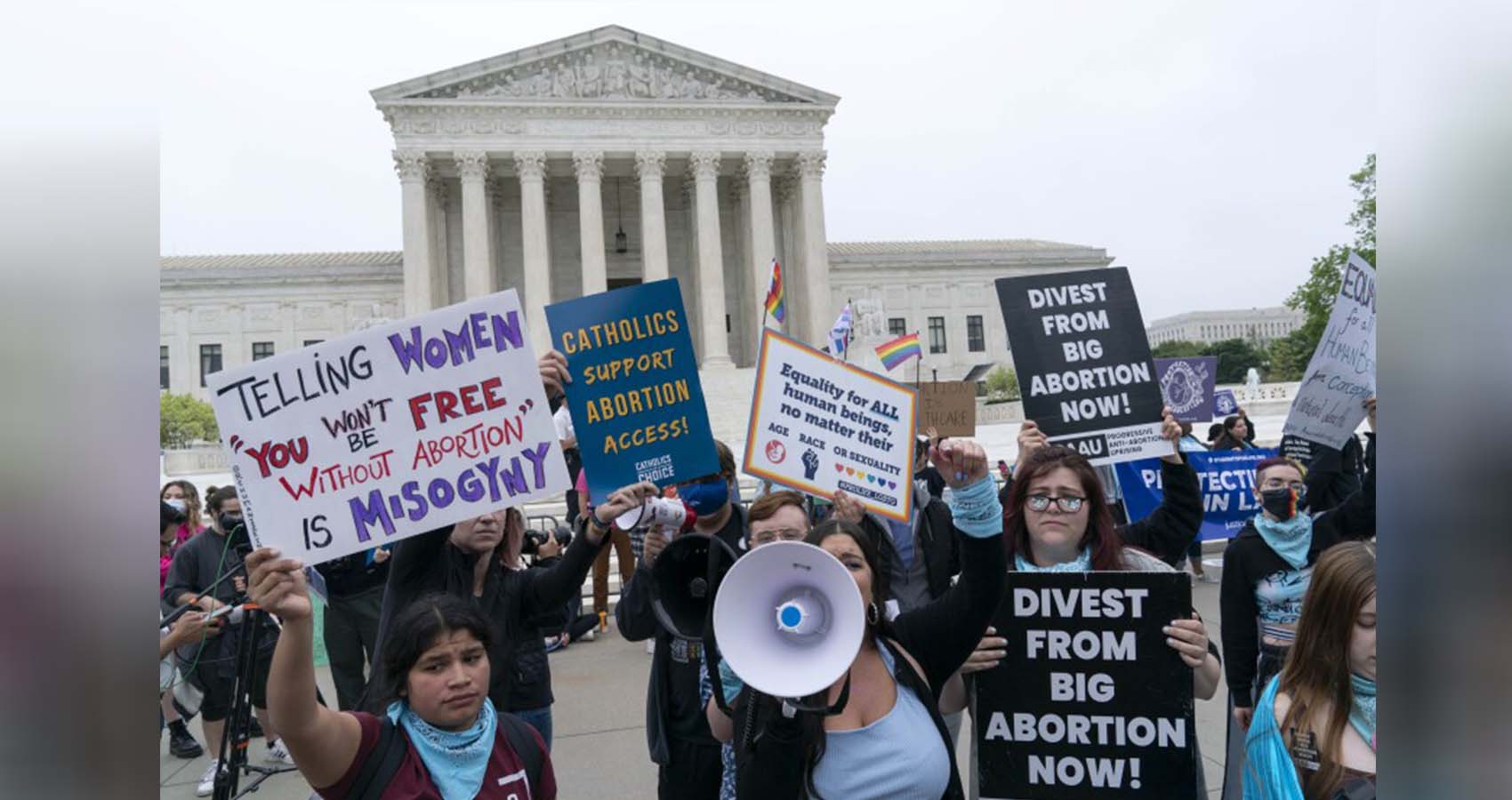 The leaked news about the reported Supreme Court decision to overturn the landmark 1973 Roe v. Wade case that legalized abortion nationwide,  based on the Constitution that protects a pregnant woman’s right to choose abortion without excessive government restriction, has divided the nation, which has been already polarized and divided in recent times.

As per reports, a draft opinion written by conservative US Supreme Court Justice Samuel Alito is expected to fundamentally alter reproductive rights, states’ authority and American politics, startled Supreme Court lawyers, court experts, members of Congress and journalists. “Roe was egregiously wrong from the start,” the draft opinion states. It was signed by Justice Samuel Alito, a member of the court’s 6-3 conservative majority who was appointed by former President George W. Bush. 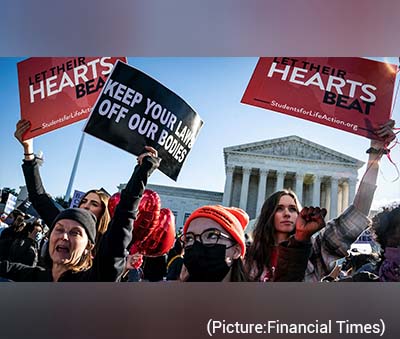 If the nation is divided on one of the most important cases that has been debated in the top Court, the justices who occupy the highest court are even more divided on the case and its implications for the millions of women who are impacted by the court that has once again proved to be a political organization, based on the ideologies of the Justices rather than the true spirit of the Constitution.

As per the leaked documents, all the Republican appointed Justices on the Court, except Chief Justice John Roberts are said to be in favor of overturning Roe v. Wade, and in the process denying women their right decide on their health and wellbeing. The justices voting with Alito are all Justices appointed by Republican Presidents: Clarence Thomas, Brett Kavanagh, Neil Gorsuch and Amy Coney Barrett.

The Democratic-appointed justices on the court, Stephen Breyer, who will retire this summer, Elena Kagan and Sonia Sotomayor, are working on one or more dissents, Politico reported, noting that Chief Justice John Roberts’ ultimate vote is unclear.

According to CNN sources, Roberts did not want to overturn Roe and would likely side with Breyer, Kagan and Sotomayor. Instead, he is willing to uphold the Mississippi law banning abortions after 15 weeks of pregnancy, per the report.

Overturning Roe would strike down what many abortion rights defenders, including Supreme Court justices appointed by presidents of both political parties, have long described as settled law. It would limit access to abortions across much of the country, including parts of the South and Midwest. In at least 13 states, abortion would immediately become illegal. As Alito’s opinion notes, the ruling would allow each state to set its own laws and restrictions. One of those restrictions deals with medication abortion, accompanied by criminal penalties.

“The Constitution does not prohibit the citizens of each State from regulating or prohibiting abortion,” the Alito draft states. “Roe and [1992’s Planned Parenthood v.] Casey arrogated that authority. We now overrule those decisions and return that authority to the people and their elected representatives.”

The draft opinion in effect states there is no constitutional right to abortion services and would allow individual states to more heavily regulate or outright ban the procedure.

“We hold that Roe and Casey must be overruled,” it states, referencing the 1992 case Planned Parenthood v. Casey that affirmed Roe’s finding of a constitutional right to abortion services but allowed states to place some constraints on the practice. “It is time to heed the Constitution and return the issue of abortion to the people’s elected representatives.”

The document was labeled a “1st Draft” of the “Opinion of the Court” in a case challenging Mississippi’s ban on abortion after 15 weeks, a case known as Dobbs v. Jackson Women’s Health Organization.

An AP-NORC poll in December found that Democrats increasingly see protecting abortion rights as a high priority for the government. Other polling shows relatively few Americans want to see Roe overturned. In 2020, AP VoteCast found that 69% of voters in the presidential election said the Supreme Court should leave the Roe v. Wade decision as is; just 29% said the court should overturn the decision. In general, AP-NORC polling finds a majority of the public favors abortion being legal in most or all cases.

Still, when asked about abortion policy generally, Americans have nuanced attitudes on the issue, and many don’t think that abortion should be possible after the first trimester or that women should be able to obtain a legal abortion for any reason.

Alito, in the draft, said the court can’t predict how the public might react and shouldn’t try. “We cannot allow our decisions to be affected by any extraneous influences such as concern about the public’s reaction to our work,” Alito wrote in the draft opinion, according to Politico.

People on both sides of the issue quickly gathered outside the Supreme Court waving signs and chanting on a balmy spring night, following the release of the Politico report.

Planned Parenthood, in a statement late Monday, said, “The leaked opinion is horrifying and unprecedented, and it confirms our worst fears.”  A majority of Americans oppose overturning the 49-year-old ruling, according to recent surveys. A CNN poll in January found that 69 percent of respondents were against doing away with Roe while 30 percent were in favor.

The leak jumpstarted the intense political reverberations that the high court’s ultimate decision was expected to have in the midterm election year. Already, politicians on both sides of the aisle were seizing on the report to fundraise and energize their supporters on either side of the hot-button issue.

Speaker Nancy Pelosi (D-Calif.) and Senate Majority Leader Charles Schumer (D-N.Y.), in a joint statement, said a majority vote to overturn Roe “would go down as an abomination,” adding that it would be “one of the worst and most damaging decisions in modern history.”

Senate Judiciary Committee member Amy Klobuchar (D-Minn.) tweeted Monday night that the published Alito opinion pointed to a role for Congress. “It is a fundamental right for a woman to make her own health decisions. We must protect the right to choose and codify Roe v Wade into law,” she said.

New York Gov. Kathy Hochul, also a Democrat, said people seeking abortions could head to New York. “For anyone who needs access to care, our state will welcome you with open arms. Abortion will always be safe & accessible in New York,” Hochul said in a tweet.

On the GOP side, lawmakers were incensed with the disclosure of the high court’s draft. Sen. Tom Cotton (R-Ark.) said that the court and the Justice Department “must get to the bottom of this leak immediately using every investigative tool necessary” (The Hill).

Mississippi Attorney General Lynn Fitch said in a statement, “We will let the Supreme Court speak for itself and wait for the Court’s official opinion.” But local officials were praising the draft. “This puts the decision making back into the hands of the states, which is where it should have always been,” said Mississippi state Rep. Becky Currie.

A decision to overrule Roe would lead to abortion bans in roughly half the states and could have huge ramifications for this year’s elections. But it’s unclear if the draft represents the court’s final word on the matter — opinions often change in ways big and small in the drafting process. The court is expected to rule on the case before its term ends in late June or early July.