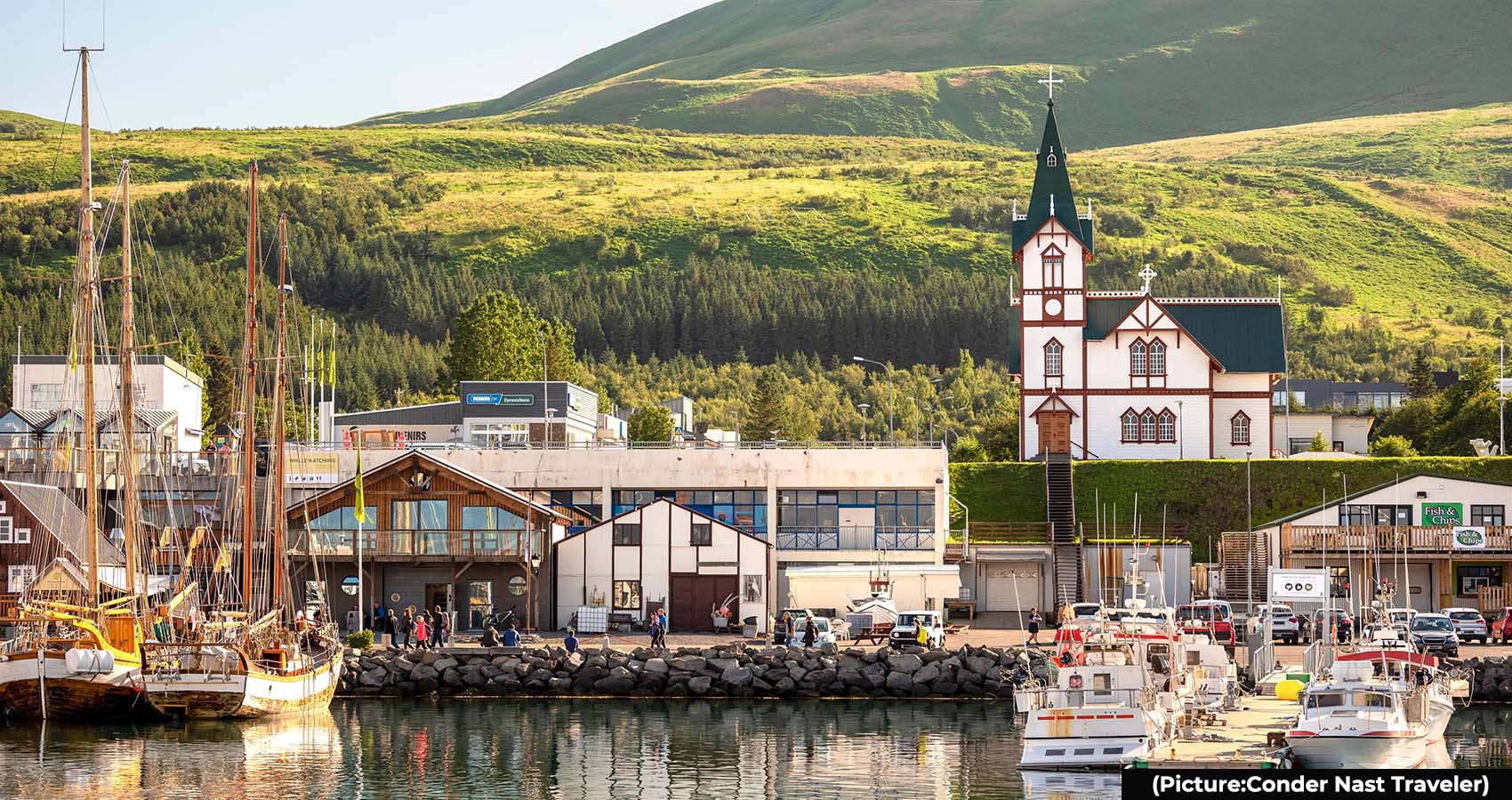 Happiness is a difficult thing to measure, but one initiative at the United Nations has been trying to figure it out. Every year since 2012, the U.N. Sustainable Development Solutions Network has published its World Happiness Report—a study that examines the connections between happiness and development, all while encouraging policymakers to place more of an emphasis on the former.

Around 1,000 people in each U.N. member state rate their quality of life on a scale from 0 to 10, while researchers cull data from six areas: GDP per capita, life expectancy, social support, trust and corruption, perceived freedom to make life decisions, and generosity. The World Happiness Report 2022 was just released, and while the results follow previous trends (every Nordic country made the cut), the list is a little more interesting because of COVID-19. The report paid special attention to evaluate how different governments have supported citizens’ happiness before, during, and likely after the pandemic.

Here is the list of the 10 happiest countries in the world—and who knows? Maybe just daydreaming about visiting these countries will give you a boost of happiness. 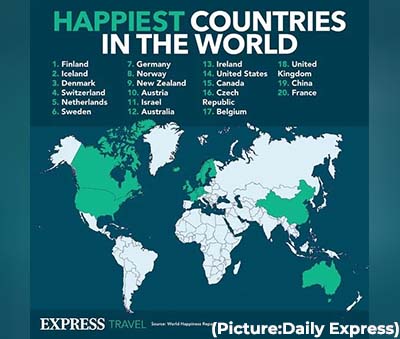 New Zealand has had one of the lowest rates of COVID-related deaths during the pandemic, cementing its spot in the top ten. Even without that time stamp, Kiwis are a famously happy and friendly bunch, which stems from satisfaction in both the workplace and social spheres. Having a Prime Minister who prioritizes emotional and mental growth certainly doesn’t hurt, either: In 2019, Jacinda Ardern introduced a Wellbeing Budget, which allocated billions of dollars towards initiatives like bolstering mental health, reducing child poverty, and supporting the Māori and Pasifika populations.

Endorphin-boosting travel tip: This one’s easy: go play outside. New Zealand is one of the most naturally beautiful countries in the world, with as many outdoor activities as there are stunning landscapes. Whether you spend your vacation kayaking in Milford Sound, hiking through Tongariro National Park, or bungy jumping in Queenstown, you’re sure to leave feeling better than when you arrived.

After placing 12th last year, Israel has finally broken into the top ten in 2022. The country’s response to the pandemic instilled a lot more government trust among citizens, as it was one of the first nations to successfully vaccinate a large percentage of its population. Israel also happens to be one of the healthiest countries in the world, with the lowest number of diet-related deaths (high cholesterol, Type 2 diabetes, etc.) in the entire world.

Endorphin-boosting travel tip: Travelers can enjoy that life-extending Mediterranean diet at thousands of restaurants in Tel Aviv, the culinary capital of Israel. Writer Gabrielle Robins suggests seeking out street food like falafel at HaKosem, hummus at Abu Hassan, and kebabs at Zalmaniko.

There’s not too much to complain about in Norway. The mix of a well-integrated government welfare system and a thriving economy built on responsible management of its natural resources (good riddance, fossil fuel-powered cars) means that very few are left behind, and the feelings of social support, trust in government, and economic well-being that come from that all contribute to overall happiness.

Endorphin-boosting travel tip: It’s scientifically proven that being near water makes people happier, and Noway has a lot of opportunities to enter an aquatic state of mind. The country has some of the deepest and most beautiful lakes in Europe, including Lake Mjøsa about 60 miles north of Oslo. There is a bike path that circles the entire lake, so get in a good ride before cooling off in the water.

Sweden had the highest number of COVID-related deaths among all the Nordic countries, which may account for its drop from the 6th to the 7th spot this year. Still, it remains one of the happiest countries in the world thanks in large part to a high GDP per capita. An emphasis on social equality that is built into the education system starting in kindergarten, 16 months of paid family leave that can be split between a couple after a new child is welcomed into a family, and free day care also make Sweden the best country for women, according to a separate study. Basically, an emphasis on work-life balance leads to a happier populace.

Endorphin-boosting travel tip: Lagom is a way of life in Sweden (similar to hygge in Denmark), something that’s hard to translate but basically boils down to balance and moderation. Swedes apply lagom to everything from wardrobe to diet, but the most tourist-friendly way to enjoy this lifestyle is to join in fika—a designated time of day to slow down and be in the present, usually with a hot cup of coffee and baked good. Just stop by any one of Stockholm’s excellent cafes around 11 a.m. (we’re fans of Café Pascal and Green Rabbit) to easily join the locals in this daily tradition.

With a population under 600,000, this small country offers high salaries and a strong social security system to help its citizens after retirement. But before you jump to the conclusion that money is actually buying happiness in Luxembourg, the country has many other perks that have nothing to do with cash, including a great healthcare system and excellent work-life balance (probably due to the mandatory five weeks of vacation time).

Endorphin-boosting travel tip: Can’t decide between nature and culture? Get a dose of both (and a little exercise while you’re at it) by climbing Chemin de la Corniche, a pedestrian promenade that winds along Luxembourg City’s 17th-century stone walls. Dubbed “Europe’s most beautiful balcony” by Luxembourger author Batty Weber, the street affords incredible views of the Alzette River and the city’s historic center.

The biggest stat from the Netherlands this year? That its happiness levels have barely changed (we’re talking less than 0.03 percent) between 2005 and 2021. And in the Netherlands, it turns out, happiness starts young. A 2013 UNICEF report rated Dutch children the happiest in the world, based on a number of metrics related to educational well-being, safety, and health.

Endorphin-boosting travel tip: According to the UNICEF report, 85 percent of Dutch children eat breakfast with their parents every morning (a sign of positive wellbeing). While you may be past the age of sitting down for meals before school, you can still enjoy a classic Dutch breakfast during your visit to the Netherlands: typically a slice of bread topped with appelstroop, jam, or hagelslag sprinkles (we’re smiling already).

Switzerland (which dropped one spot this year) is a country where everything is voted on, from how many vacation days workers should have to how many immigrants should be allowed into the country, and referendums down to the local level happen many times a year. This system of direct democracy means that Swiss citizens feel an unparalleled sense of participation in their country’s evolution. The Swiss are known to be insular, and it can be off-putting to first-time visitors, but there is a strong social fabric held together by a belief that every voice matters, which can go a long way toward feeling content.

Endorphin-boosting travel tip: According to a research from University College London, eating small amounts of dark chocolate can lead to a significant decrease in depressive symptoms—and where better in the world to shop around for chocolate than Switzerland? Try the 99 percent cocoa bar at the Teuscher HQ in Zurich, or hop on a train to Broc to visit the renowned Cailler-Nestle chocolate factory and shop.

Iceland ranks high in terms of the proportion of respondents who said they felt like they had a fellow citizen to count on when the going gets rough. This perhaps became most obvious in the wake of the country’s post-2007 financial collapse and subsequent revitalization. You’d think that the perpetual flood of American tourists into Reykjavik might have dealt a blow to the residents’ happiness—it’s got to be a little harder to get that dinner reservation than it used to be, after all—but when it comes to well-being, the Icelanders are unfazed. Perhaps it has something to do with the fact that they can always escape the city to a countryside that looks like another planet.

Endorphin-boosting travel tip: In a small country like Iceland, it’s easy to socialize with your friends and family—a huge contributing factor to overall happiness. Tap into that close-knit culture by joining an Icelandic family for a homemade meal, which you can easily do through several tour companies. Creative Iceland offers a deal like this in Reykjavik, while Viator has an option in the fishing town of Hofn.

Denmark remained in the number two spot this year. The country rates near the top in all the reported metrics—life expectancy, social support, and generosity among them—but it is also a country hugely committed to renewable energy production (39.1 percent of its energy was wind-generated in 2014). A recent study from the Copenhagen-based Happiness Research Institute (whose existence is probably reason enough for a top spot) narrows down Denmark’s happiness to a number of different categories, including trust in the government, economic security, freedom, civil participation, and work-life balance.

Endorphin-boosting travel tip: Socioeconomic factors aside, the country’s happiness certainly comes in part from a respect for the planet it’s built on. To get a sense of that “at one with nature” mentality, visit Denmark in the summer and stay at a traditional Danish seaside inn. After a few days cycling along the coast, eating fresh mussels and house-made sourdough, and taking in views of the Baltic Sea from a shaded hammock, you can’t help but feel a little more joyful.

For the fifth year in a row, Finland is number one when it comes to happiness. The country consistently ranks among the top education systems in the world, occasionally beaten out by countries like South Korea, Japan, and Singapore. Much of that success comes from a widespread reverence for teachers, who are required to have a master’s degree (their education is state-funded), and a pedagogical system that focuses less on quantitative testing and more on experiential learning and equal opportunity.

Endorphin-boosting travel tip: Winter swimming is an extremely popular activity in Finland, with citizens claiming they get a huge rush of happiness as soon as they’re back on dry land and their circulation kicks back in. It’s an acquired taste to be sure, but the surge of serotonin and dopamine might just be worth it.