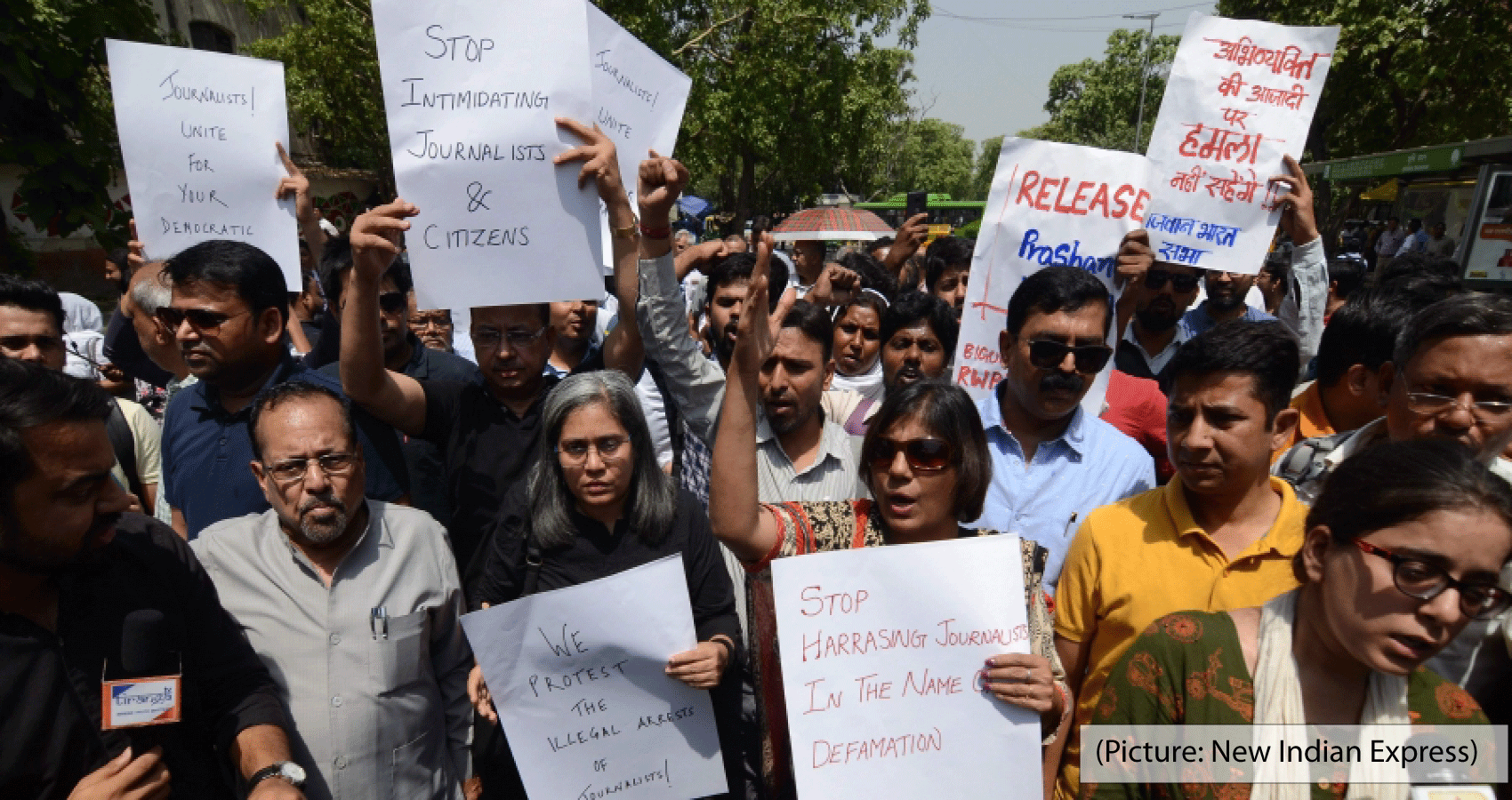 A month after taking office in the summer of 2014, Prime Minister Narendra Modi said India’s “democracy will not sustain if we can’t guarantee freedom of speech and expression”.

Six years on, many believe, India’s democracy looks diminished, by what they say are persistent attacks on the freedom of the press.

Last year India dropped two places and was ranked 142 on the 180-country World Press Freedom Index, compiled annually by Reporters Without Borders. It’s an unflattering commentary on a country that often prides itself on a vibrant and competitive media.

The latest crackdown has happened after violence during a recent rally by farmers to protest at a raft of agriculture reform laws. One protester was killed and more than 500 policemen injured in the clashes.

Now police have filed criminal charges – including sedition and making statements inimical to national integration – against eight journalists who covered the protests in Delhi.

The cause of the protester’s death – at the rally on 26 January – remains disputed. While police say he died when the tractor he was driving overturned, his family alleges that he was shot. His family’s account, which has been published by various newspapers and magazines, appears to have become the basis of these charges.

Some of the journalists were involved in reporting or publishing the story, and others only shared it on social media.

Six of them – and a prominent opposition Congress party MP who is accused of “misreporting” facts surrounding the death – are facing cases in four BJP-ruled states.

“Is it a crime for media to report statements of relatives of a dead person if they question a post-mortem or police version of the cause of death?” Siddharth Varadarajan, editor-in-chief of The Wire and one of the journalists charged by police, said.

Rights groups and many fellow journalists are outraged. “The Indian authorities’ response to protests has focused on discrediting peaceful protesters, harassing critics of the government, and prosecuting those reporting on the events,” said Meenakshi Ganguly, South Asia director at Human Rights Watch. The police cases, the Editors Guild of India said, were “an attempt to intimidate, harass, browbeat, and stifle the media”.

A case in point, many say, is Caravan, an investigative news magazine which has often been in the crosshairs of Mr Modi’s government.

Ten sedition cases have been brought against three of its senior-most editorial staff – the publisher, editor and executive editor – in five states for a story and tweets relating to the death of the protester. One of the magazine’s freelance reporters was arrested from a protest site for “obstruction”, and released on bail after two days. The magazine’s Twitter account was suspended for a few hours in response to a legal notice by the government, citing objections based on public order.

Last year, four of Caravan’s journalists were attacked in two separate incidents while reporting on the aftermath of religious riots and a protest concerning the alleged rape and murder of a teenager in Delhi. “There is a narrative here which is very dangerous. We live in polarised times where critics of the government are branded as anti-nationals. It is the job of journalists to ask questions to people in power,” Vinod Jose, executive editor of Caravan, told me.

The governing Bharatiya Janata Party (BJP) denies that journalists are being targeted and believes that much of what is happening is part of “orchestrated propaganda” against the government.

“All journalists with avowed political affiliations and evident slant against the government have continued to write and speak freely in newspapers, television, and online portals,” Baijayant Panda, national vice president of the BJP, told me.

Mr Panda says police have filed complaints against journalists in a “couple of recent cases” because there have “been serious criminal allegations of fake news peddling in a riot-like situation, with the intent of fanning violence”.

He pointed to the case of a senior anchor of a leading news network who was taken off air and his pay docked because of an “incorrect” tweet relating to the death of a protester.

“This was not just blatant peddling of a false narrative, but one that had real and imminent potential to inflame large-scale violence. The said journalist and others of his ilk have also had a pattern of promoting such false narratives on earlier instances, and in fact have had to apologise on the record after being taken to court by affected parties,” Mr Panda said.

He said some state governments, run by political parties opposed to Mr Modi’s government, and “for whom these journalists have shown unabashed sympathy, have in fact been hounding journalists with the blatant misuse of power”.

Critics say a number of journalists seen as sympathetic to the government have consistently got away with broadcasting and publishing inflammatory material, often targeted at minorities.

Also, they wonder why the colonial era sedition law is being so widely used to crack down on dissent. An overwhelming majority of sedition cases filed against 405 Indians for criticising politicians and governments over the last decade were registered after 2014, when Mr Modi took power, according to data compiled by the website article14. Opposition politicians, students, journalists, authors and academicians have borne the brunt of the repressive law.

In a polarised environment, journalists are more divided than ever before. Much of the mainstream media, including a clutch of partisan news networks, is seen to be uncritical of Mr Modi’s government. “India, the world’s most populous democracy, is also sending signals that holding the government accountable is not part of the press’s responsibility,” a report by Freedom House said.

Many believe India is becoming unsafe for journalists. Sixty-seven journalists were arrested and nearly 200 physically attacked in 2020, according to a study by Geeta Seshu for the Free Speech Collective. A journalist, who was on his way to cover the gang rape of a girl in Uttar Pradesh state, has been in jail for five months.

Journalists – especially women critical of the government – face fierce online trolling and threats. Delhi-based freelance journalist Neha Dixit says she has been “stalked, openly threatened with rape and murder, viciously trolled”, and an attempt made to break into her apartment. This week, the police arrested a law student for allegedly sending death and rape threats to Rohini Singh, another freelance journalist.

The protection afforded to freedom of expression in India has never been robust, according to Tarunabh Khaitan, vice-dean of law at Oxford University.

Although this is a constitutionally guaranteed freedom, its scope was drastically restricted by the First Amendment under Prime Minister Jawaharlal Nehru in 1951. It was then that India’s government “discovered that mouthing platitudes to civil liberties was one thing, and upholding them as principles was quite another,” notes Tripurdaman Singh in his book Sixteen Stormy Days.

And the colonial police and criminal justice system inherited from the Raj continues to see “human rights as an obstacle rather than their first duty to defend”, says Prof Khaitan. India’s Supreme Court, too, has had a poor track record on protecting civil liberties in comparison with courts in many other democracies, he says.

“The biggest sufferers are the two truth-seeking institutions whose autonomy from political as well as corporate power is critical to a democracy: the media and the universities. The role of these knowledge institutions is to challenge power and seek discursive accountability from power. But once captured, they serve as the instruments of power instead. Weak protection of free expression makes it relatively easy to capture or compromise them,” Prof Khaitan told me.

India’s media was gagged for 21 months when then prime minister Indira Gandhi suspended civil liberties and imposed a nationwide Emergency in 1975. “What is unusual about our current political moment is that, unlike a formal emergency that undermines rights openly, all our rights are supposed to still be functional. There is no formal suspension of rights. But their corrosion in practice has become overwhelming. We are living in an extra-legal, informal, emergency. During a formal emergency, a citizen can perhaps hope that things will go back to normal once it is lifted,” says Prof Khaitan.  “How do you even ‘lift’ an informal emergency, one that was never promulgated in the first place?”