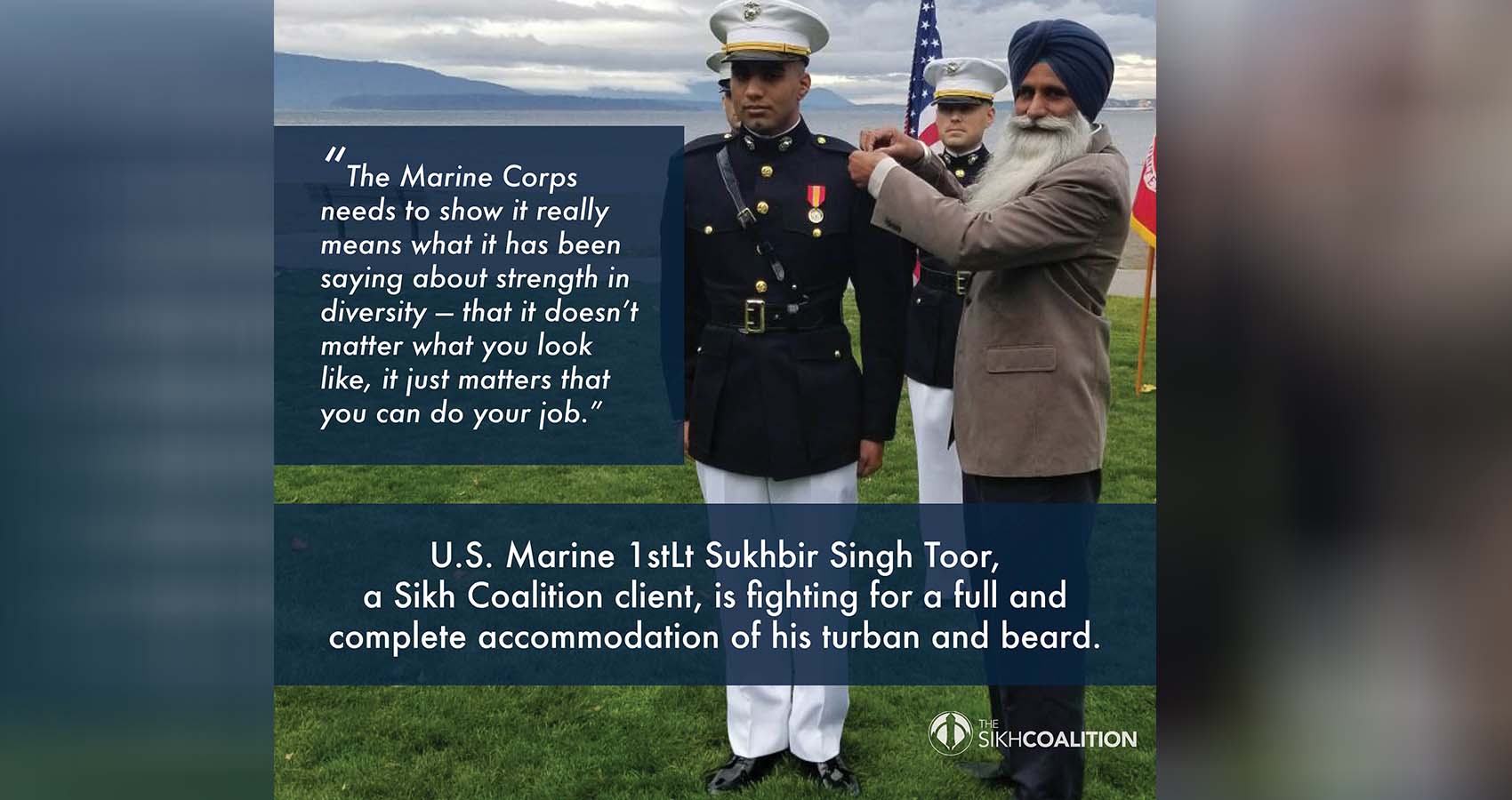 The Sikh Coalition, while sharing the story of a client, 1st Lieutenant (1stLt) Sukhbir Singh Toor, an active duty officer in the U.S. Marine Corps (USMC) who is fighting to continue his military service while keeping his Sikh articles of faith, has advocated to end discrimination at work place. 1stLt Toor is currently facing an inadequate and incomplete religious accommodation that forces him to choose between his turban and beard or his career.

1stLt Toor’s case is the latest pivotal development in our 12-year campaign to combat employment discrimination by our nation’s largest employer, the Department of Defense. Building off the historic policy victories in the U.S. Army and Air Force, we continue working to ensure that Sikhs can maintain their articles of faith in every branch of the military in our efforts to further protect religious rights in all American workplaces. If the USMC grants 1stLt Toor a full accommodation, it would be the first–to our knowledge–for an active duty Sikh Marine to maintain their articles of faith.

“For more than three years, I have proven my commitment to excelling in the U.S. Marine Corps and defending my country,” said 1stLt Toor. “Now, with the direct support of the Sikh Coalition, I am seeking a full and complete religious accommodation that will allow my turban and beard so that I can stay true to my faith while continuing my career of service.”

1stLt Toor has served with distinction in the USMC since October 2017. As a younger man, he thought he had no choice but to compromise his articles of faith in order to serve his country as a Marine, due to the branch’s track record of denying these types of religious accommodations; thus, he made the extremely difficult decision to shave his beard and cut his hair, but committed to return to his articles of faith at the earliest opportunity. In March of this year, he applied for an accommodation in the hopes that his excellent service would help bolster his request. After several rounds of appeals, in August, the Department of the Navy granted a limited accommodation which imposed unacceptable restrictions on 1stLt Toor’s religious rights–including that he would be forced to shave his beard when deployed. Accordingly, we are now considering our final options before litigation.

“It is disappointing that the Marine Corps only wants to allow 1stLt Toor to practice his faith in ways and at times that are convenient to them; they would rather derail his promising career than acknowledge his right to practice Sikhi.” said Giselle Klapper, Sikh Coalition Senior Staff Attorney. “In 2016, we successfully took the U.S. Army to court over the right to maintain one’s articles of faith while serving in the military, and we’re prepared to do the same with the USMC now: No Sikh, in any workplace, should be forced to make a false choice between maintaining their articles of faith and excelling in their chosen profession.”

In addition to representing 1stLt Toor and facilitating the New York Times story, the Sikh Coalition is advocating for his accommodation through other channels. We are currently in touch with the White House, various legislative offices in the House of Representatives and Senate, and leadership at the Department of Defense to push for this case to be addressed outside of the courtroom.

To date, the Sikh Coalition, our pro bono counsel at Winston & Strawn LLP and McDermott Will & Emery, and our litigation partners the Becket Fund for Religious Liberty have helped more than 30 Sikhs in the U.S. Army and U.S. Air Force (USAF) secure their accommodations; in addition to 1stLt Toor, we are also assisting other USMC clients as they apply for religious accommodations. We also recognize the important work of the American Civil Liberties Union, BakerHostetler, and the Sikh American Veterans Alliance on this campaign. For more than a decade, advocacy and legal action has ensured that nearly 100 Sikhs total are able to serve in the U.S. Armed Forces with distinction and with their articles of faith; the service of these individuals is proof positive that religious identity does not impede a career in the U.S. military. If you or someone you know needs assistance securing a uniform or grooming accommodation for any employer, contact our legal team for free aid.

In the meantime, we and our partners continue to work towards branch-by-branch policy improvements similar to those already achieved in the Army in 2017 and the USAF in 2020, including continued development of the U.S. Navy’s regulations and proactive change for the USMC, U.S. Coast Guard, and U.S. Space Force. If you have questions about our work on this issue, be sure to read our community FAQ; our goal remains to end religious employment discrimination across the country, including in the U.S. Department of Defense.