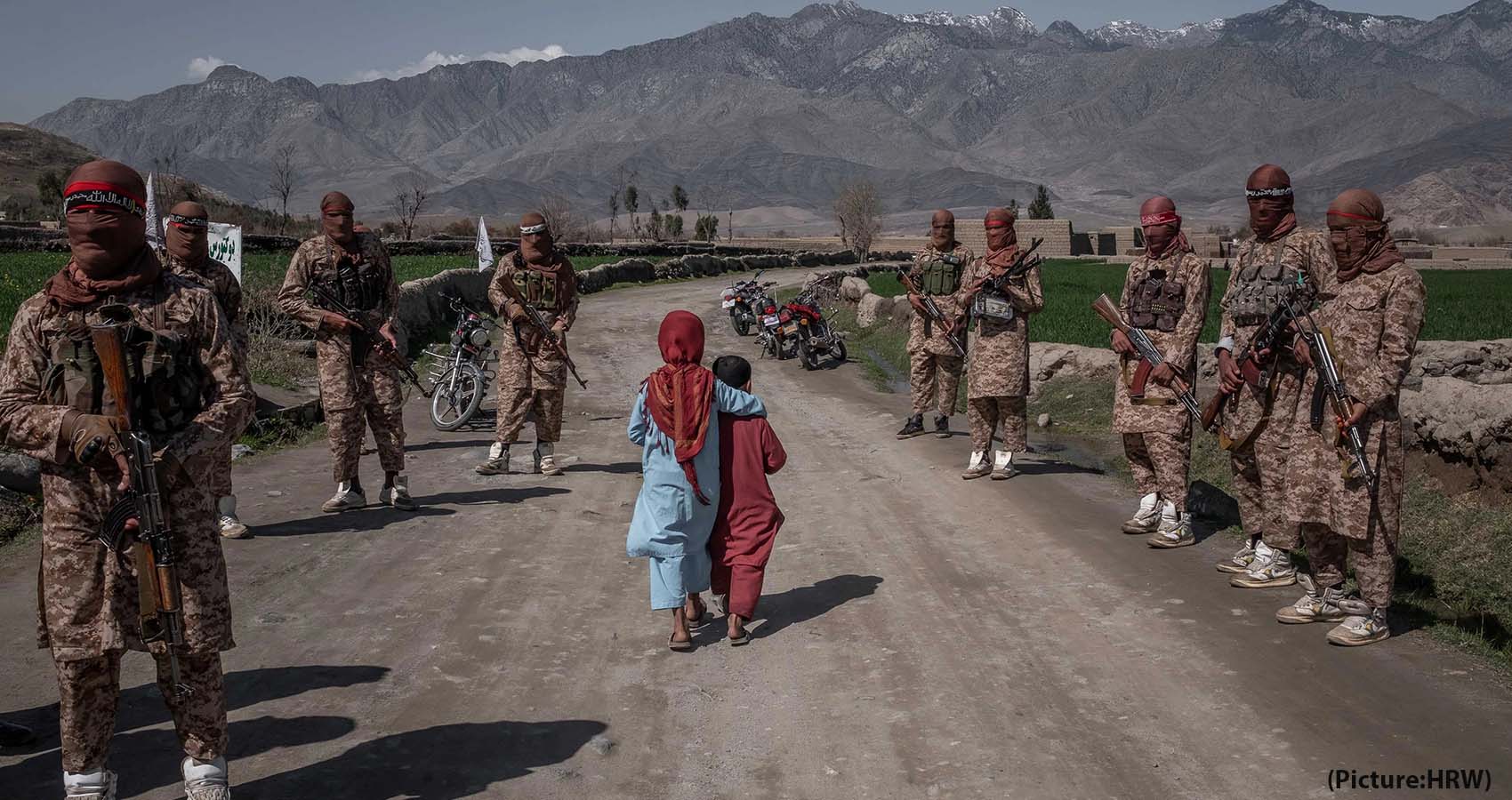 We mourn with the Afghan people their double tragedy. The first tragedy—the US’s illegal and utterly unjustified military invasion twenty years ago—helped prepare the ground for today’s tragedy, the accession to power of the Islamo-fanatical Taliban. Condemnation of the latter must not mean any softening of the criticism of US and Western imperialism or in shedding tears at its departure from the country.

The single most important democratic advance in the whole of the second half of the 20th century was the end of foreign colonial and imperialist rule even where this unfortunately resulted in the emergence of indigenous dictatorships. In a world where peoples are constituted as belonging to separate and multiple states, the fundamental moral-political principle to uphold (minus the rarest of exceptional cases) is respecting the freedom of agency of a people to overthrow their own tyrants. This is why it was the responsibility of Indians to overthrow British rule, of Indonesians the Dutch, of South Africans against Apartheid, and so on. Calling for external help of all kinds, even military aid, was one thing; calling for external military liberation, No!

In the 1978 ‘Saur Revolution’ a secular and reform-minded pro-Soviet ‘Communist’ party, the PDPA (People’s Democratic Party of Afghanistan) came to power but was bedevilled by internal armed faction-fighting and had no real social base beyond Kabul. The Soviet invasion in 1979 to support this government was morally unjustified and condemnable while politically disastrous, handing over as it did the mantle of ‘popular nationalist struggle’ against the foreign invader, to a host of ethno-tribal Islamist groups including Al Qaeda and Taliban. The primary military aiders, equippers and trainers of these were the US, its British/French allies along with Pakistan. The Soviets finally withdrew in 1989 with its factotum government collapsing three years later amidst a civil war waged by the various Islamists until the Taliban capturing  90% of the territory established its dominance in 1996.

In 2001 the US government deliberately refused to characterise the assault on Twin Towers and Pentagon as what it was, namely an international crime against humanity. For that would have meant going after the criminals and their network only. Instead, by declaring a ‘Global War on Terror’ and claiming that no distinction would be made between the guilt of the perpetrators and that of the governments of countries which the US declared to be ‘housing terrorists’—the way was cleared for the US to transform a conflict between itself and a non-state network into one against any number of countries in West and Central Asia in keeping with its wider geo-political ambitions of achieving global dominance. In the new millennium Afghanistan was the first of many to suffer such military assaults. The US foreign policy establishment had already identified China, Iran and Russia as the ones to watch out for and were accordingly well aware that Afghanistan, apart from Pakistan, abuts Iran, China and pro-Russia Central Asian Republics, the latter also a region having large relatively untapped sources of oil and gas.

In these 20 years the US military and its puppet regimes (themselves corrupt and internally fractious) have carried out massive bombings (‘daisy cutters’, cluster bombs), drone attacks (extending into Pakistan) and brutal and indiscriminate ‘search and destroy’ missions against unknown insurgents and their families. US deaths (soldiers and contractors) have been around 6500.

In contrast, by extremely conservative estimates, total Afghan deaths up to the end of 2019 (government soldiers/police, opposition fighters, civilians) were around 160,000. Other sources which try to take account of unreported deaths have estimates of civilian casualties alone running from a few hundred thousand to over a million in an overall population between 35-40 million. Four million Afghans have been internally displaced with another 2.7 million external refugees. As of now around 48% are below the national poverty line. Some progressive laws and reforms have taken place but they no more justify US presence and rule than the fact of the British building hospitals, schools and introducing some legislatures, elections and limited franchise would have justified the persistence of colonial rule in India.

That the 300,000 plus official Afghan forces (soldiers, police, special militias) numbering 5 to 6 times more than Taliban fighters and also equipped with the most advanced arsenal of weapons and having full mechanical control of airspace should have so dramatically collapsed, indicates that the Taliban did have a measure of ground support and public acquiescence (no doubt considerably fear-induced) beyond its predominantly Pushtun base. However, it is strongly hostile to the Persian-speaking Tajiks who make up 27% of the population as compared to the 42% of Pushtuns which means there is every reason to fear serious internal repression and even a possible civil war type situation in the future. Taliban may or may not have learnt something from its past international isolation and avoid some forms of social  and civic repression. But given its history and social/civic programme of religious sectarianism, anti-democratic, anti-women measures—it has declared it will impose Sharia Law—there is every reason to oppose it forthrightly and without equivocation.

Governments everywhere including India’s, will shed crocodile tears for the Afghan people, but are in fact (accompanied by respective bus loads of ‘strategic experts’) only motivated by the crude and amoral considerations of realpolitik. Claiming to pursue the ‘national interest’—standardised subterfuge for the actual pursuit of ruling class interests that these different states actually represent—they will decide whether or when to establish diplomatic relations of some kind with the new Taliban government; or else to join hands with other self-serving major powers and their cohorts be these the Western Alliance or the possible front of Russia, China and Pakistan that looks more favourably at the new dispensation in Afghanistan.

No Afghan government has ever accepted the Durand line and the Taliban with even stronger sympathies with Pushtuni nationalism is not as beholden to Pakistan as the Islamophobic Modi government (some of whose Hindutva prescriptions are as debased as those of radical Islam) would like to make out for the purpose of whipping up anti-Pakistan sentiment domestically which then pays dividends for deepening repression in Kashmir.

It is the good of the Afghan people not our supposed ‘national interest’  that must be our point of departure for reflecting on what we must support and oppose. There should be no economic sanctions against Afghanistan. These hurt the people much more than the elites that govern. Humanitarian aid on an appropriate scale routed through progressive international and civil society organisations to this war-torn country is a must. No recognition to the Taliban regime while political, diplomatic and cultural pressures of various kinds (but not military) can play a role in pushing it to be less repressive in its laws and actions against women and ethnic and religious minorities.

A basic test for the West and many other countries will come with regard to the posture they adopt towards the flow of Afghan refugees now and afterwards. There should be no restriction to those seeking refuge or asylum and adequate provision be made for them to stay or relocate to where they can. This holds for India as well. Even before the advent of Modi, India was and remains a non-party to the 1951 Refugee Convention and its 1967 Protocol which among other things rejects refoulement (forcible return of refugees to their places of displacement/persecution).

The Modi government has carried this out to a number of Rohingyas simply because they are Muslims. This hostility to Muslims and Islam is also reflected in the Citizenship Amendment Act applicable to Afghanistan. While New Delhi may in current circumstances allow for selective refugee influx this is not enough. Free flow must be allowed even as there can be discussion among neighbouring states for sharing the responsibility. Moreover, those Afghans, students and otherwise who are already in the country and wish to remain must have their visas extended until such time as they feel confident of returning back or they can in due course apply for Indian citizenship. NO TO IMPERIALISM, NO TO THE TALIBAN