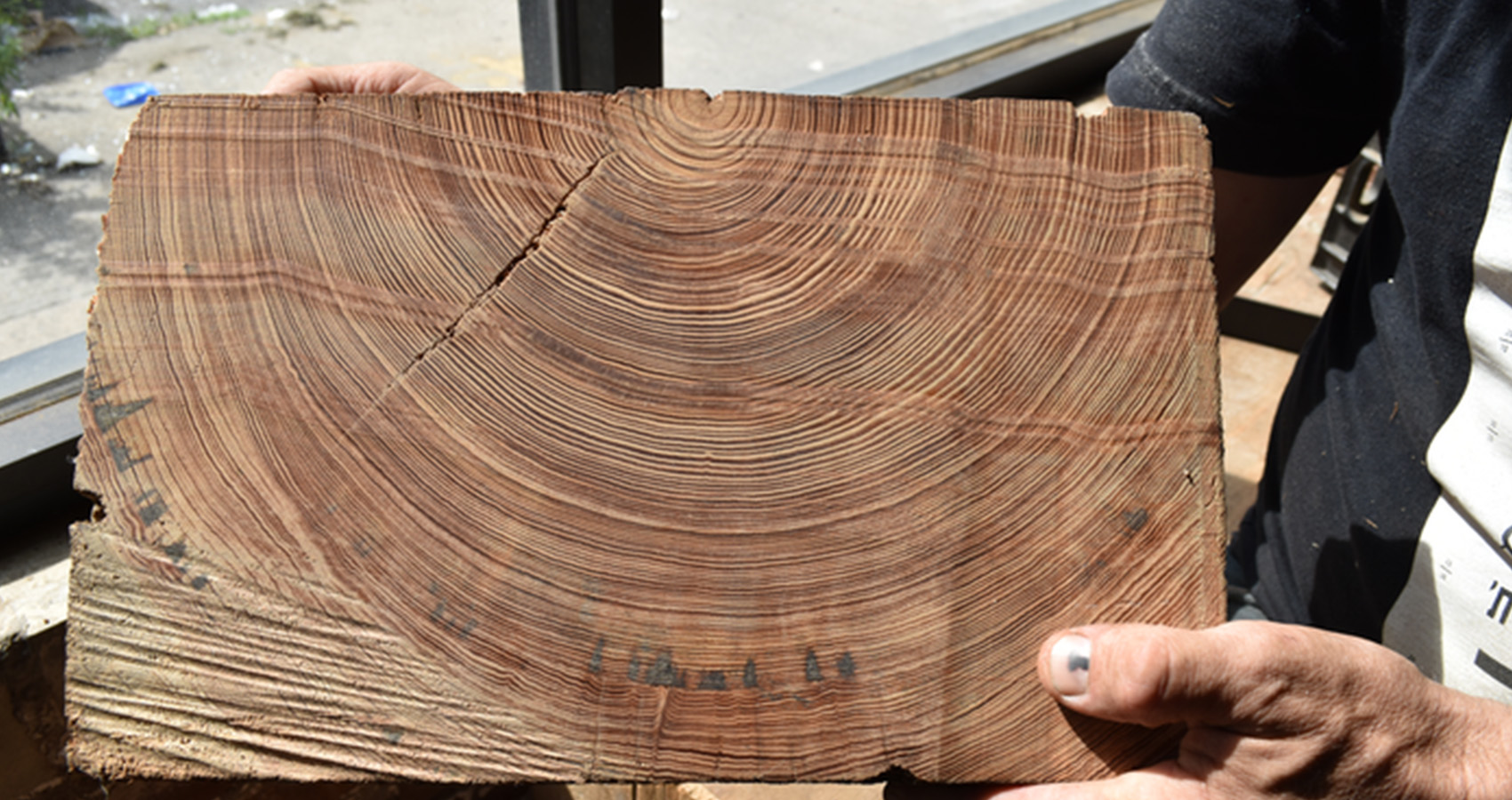 Newswise — In the popular imagination, New York City is a mass of soaring steel-frame skyscrapers. But many of the city’s 1 million buildings are not that modern. Behind their brick-and-mortar facades, its numerous 19th- and early 20th-century warehouses, commercial buildings and row homes are framed with massive wooden joists and beams. These structures probably harbor at least 14 million cubic meters of timber, the volume equivalent of about 74,000 subway cars. Their main sources: old-growth forests that long predated New York, and were erased to create it.

Historic preservation has never been New York’s strong point; about 1,000 old buildings are demolished or gut-renovated every year, the remains mostly going to landfills. Now, a team from the Tree Ring Laboratory at Columbia University’s Lamont-Doherty Earth Observatory is harnessing the destruction to systematically mine torn-out timbers for data. Annual growth rings from trees that were young in the 1500s may offer records of past climate no longer available from living trees. Studies of timber species, ages and provenances can shed light on the history of U.S. logging, commerce and transport.

“New York City is a huge repository of old timbers, probably the biggest in the country. It’s an amazing resource for science,” said dendrochronologist (tree-ring scientist) Mukund Palat Rao, one of the leaders of the effort (his position at Lamont is sponsored by the National Oceanic and Atmospheric Administration). “These forests don’t exist anymore—they’re inside the buildings. They’re being demolished at a rapid pace, and getting thrown away. We’re trying to collect whatever we can.”

After its settlement by the Dutch in the 1620s, New York grew steadily but slowly. Then, about 1840, great waves of immigrants began arriving. A resulting major growth spurt lasted some 80 years before tapering off. During this time, much of the now existing city was built. Before steel came in during the early 20th century, the framing material of choice was wood. Starting in the 1700s, loggers to the north cut vast swaths of white pine, spruce, hemlock and balsam fir, often floating it down the Hudson River. By the latter 1800s, three-quarters of the Northeast’s virgin forests were stripped. Many builders then looked to the vast old-growth longleaf pine ecosystems of the U.S. Southeast. When the eastern seaboard was exhausted, loggers moved on to Louisiana, Mississippi and Texas. Today, only about 3 percent of the South’s old longleaf forests remain.

In a study just published in the Journal of Archaeological Science: Reports, the researchers shed unprecedented light on this period. The study looks at joists taken from Manhattan’s gigantic 1891 Terminal Warehouse, an iconic structure that still occupies an entire block in Manhattan’s Chelsea neighborhood. Early on, it stored everything from carpets, furs and liquor to Broadway stage sets and stone sarcophagi. In the 1980s, it was converted into the country’s largest mini-storage facility. A run of railroad tracks bisecting its cavernous interior became for more than a decade the site of the infamously decadent Tunnel nightclub. The warehouse has also served as a spooky set for movies including the “Ghostbusters” series.

In 2019, new owners wanted to open up space for new shops, offices and restaurants. This involved pulling out enormous wooden joists holding up some interior sections of the building. Hoping to reuse the joists, they called Edward Cook, head of the Tree Ring Lab, to see what could be learned about them.

Cook is a hero of archaeodendrochronology, the study of wood from old buildings. Early in his career, his examinations of Philadelphia’s Independence Hall and other historic structures showed that their ages could be pinned down by studying tree rings in their framing. He has since dated about 150 old houses and other buildings across the Northeast. In 2014, he and colleagues analyzed the remains of a wooden sloop accidentally turned up during excavations at the destroyed World Trade Center site. They determined it had been built from old-growth white oak cut somewhere near Philadelphia around 1773, and served for 20 or 30 years before being dumped on the mucky shoreline of New York harbor.

The tree-ring lab crew went down to the Terminal Warehouse’s massive basement. Here, they found piles of removed joists, 22 feet long, a foot wide and 3 inches deep. Looking at the ends in cross section, they could see that many displayed 150 or more annual growth rings—a dendrochronologist’s delight. (Caroline Leland, the study’s lead author with Rao, also noted several humongous bird-cage-like things—tools of the trade once used by go-go dancers at the Tunnel, she guessed.) Amid combustion fumes and deafening racket, a building worker chain sawed off the ends of a couple of dozen of the best-looking joists, and the scientists took them back to the lab.

Based on resin content and certain patterns and colors in the timbers’ rings, the team determined that the joists were perfect specimens of old-growth longleaf pine, prized by 19th-century builders for their density, strength and resistance to rot.

Trees’ growth rings vary each year according to weather; in the simplest translation, wider rings mean wetter years with good growing conditions. After that, it gets more complicated; by measuring and comparing rings in excruciating detail, dendrochronologists can create a year-by-year fingerprint that most or all of the trees from the same place have in common. The joists came from different parts of different trees, so no two represented the exact same time span. But many overlapped in time. This allowed the scientists to assemble a master chronology, from the date the oldest trees started growing to the date they were cut.

Based on the characteristics of some of the joists’ outer rings, the scientists determined that most of the trees had been felled in 1891or a bit earlier. And, all the trees were ancient; most started out as saplings anywhere from the early 1600s to the mid-1700s. The oldest had sprouted around 1512.

They then compared their data to previous studies of rings in rare living longleaf stands, ranging from Louisiana to North Carolina. Because yearly conditions vary from site to site, each site exhibits localized ring patterns. By comparing these, they were then able to deduce where the timbers had come from: The rings from the joists lined up nicely with those of living trees from eastern Alabama’s Choccolocco Mountain and Spreewell Bluff, just across the border in western Georgia. Both areas had been heavily logged in the late 1800s, when steam power and rail networks were expanding mightily, allowing lumber to be shipped to ravenous faraway markets like New York.

Delving into regional historical archives, the team hypothesized that the trees were sawed at the Sample Lumber Company, near Hollins, Alabama. Then, in one of a couple of possible scenarios, they would have been shipped by a series of connecting railroads to the port of Savannah, Ga. There, the 250-pound joists would have been loaded into openings in the hulls of schooners bound for the banks of the Hudson, where the Terminal Warehouse was rising.

“To think of all those old trees, just clear cut—that was really sad,” said Leland. On the other hand: “There is a lot of history locked up in those timbers. It’s really difficult to find living old growth in the eastern United States now. If we can get enough samples, it may allow us to develop a better understanding of the long-term climate in the regions these trees come from.”

The scientists now wanted more old timbers. Luckily, they had a connection with Alan Solomon, a New York entrepreneur and polymath. Solomon comes from a family of scrap-metal dealers, so he knows salvage. He is also an intensely driven historical researcher and preservationist. Among other pursuits, he fought for seven years in the late 1990s and early 2000s to stop the demolition of 211 Pearl Street, a circa 1831 commercial building in lower Manhattan commissioned by soapmaker William Colgate. (Yes, that Colgate, progenitor of the Colgate-Palmolive mega-corporation.) Solomon had heard that New York writer Herman Melville might have written his famous 1853 short story “Bartleby the Scrivener” at 211 Pearl. This may or may not have been true. In the end, the building was destroyed and replaced by a skyscraper. A salvager carted away some of the timbers and sold them for reuse in other buildings, including a hotel in New Hampshire.

By 2019, Solomon was running his own Brooklyn-based timber-salvage company, Sawkill Lumber. (Named after a creek that once ran from the present-day site of the American Museum of Natural History to the East River. It powered an early 1600s Dutch sawmill that probably helped devour the old-growth forest of Manhattan itself.) Solomon also authored a book about reclaimed wood, for which he consulted Ed Cook. After that, Solomon ended up helping with historical research for the Terminal Warehouse project. With his finger on the pulse of New York demolitions, he was more than happy to have the dendrochronologists tag along with him to active sites and saw out samples as walls were being taken down and workers piled up debris.

Among other places, they showed up with their own chainsaws and hardhats to the remodeling of an 1898 firehouse on Manhattan’s Lafayette Street; a couple of doomed horse stables in Brooklyn; the 19th-century St. Mary’s Church in Brooklyn’s Clinton Hill neighborhood, which was coming down for a modern development; and various warehouses, homes and mixed-use building scattered around the city. So far, they have material from 18 buildings, and plan to collect more.

The one other site they have analyzed so far is 211 Pearl; Solomon had hung on to some of the remains. They identified the framing as white pine. They then compared the timbers to studies of rare living white pines from Pennsylvania, upstate New York and Quebec, and found the best match in New York’s Adirondack Mountains. Here, they learned, the pines had once grown as much as four feet in diameter and 160 feet tall. Logging had started in the 1750s and peaked in the 1870s, with much of the wood being sawed in the upstate town of Glens Falls, and sent down to New York.

The living-tree studies to which the researchers compared the Pearl Street timbers extended back to 1690—quite a respectable stretch. But some of the Pearl Street timbers were even older: 1532. If more such specimens can be found, said Rao, this should allow the scientists to extend the climate record for this region considerably. Interestingly, the trees appear to have been cut in 1789, four decades before 211 Pearl went up. Were they stockpiled? Or, perhaps recycled from an even earlier building?

The dendrochronologists have now joined with Solomon to try founding a nonprofit aimed at promoting the preservation of old timbers in New York. They are also talking with a small group of engineers and architects who want to lobby the city for an ordinance that would identify old timbers uncovered in demolitions, and require companies to contact salvagers.

“I’d like to see information from a big network of buildings,” said Leland. “We could develop a sort of history of the urban forest.”

Lamont-Doherty Earth Observatory is Columbia University’s home for Earth science research. Its scientists develop fundamental knowledge about the origin, evolution and future of the natural world, from the planet’s deepest interior to the outer reaches of its atmosphere, on every continent and in every ocean, providing a rational basis for the difficult choices facing humanity. www.ldeo.columbia.edu  |  @LamontEarthThe