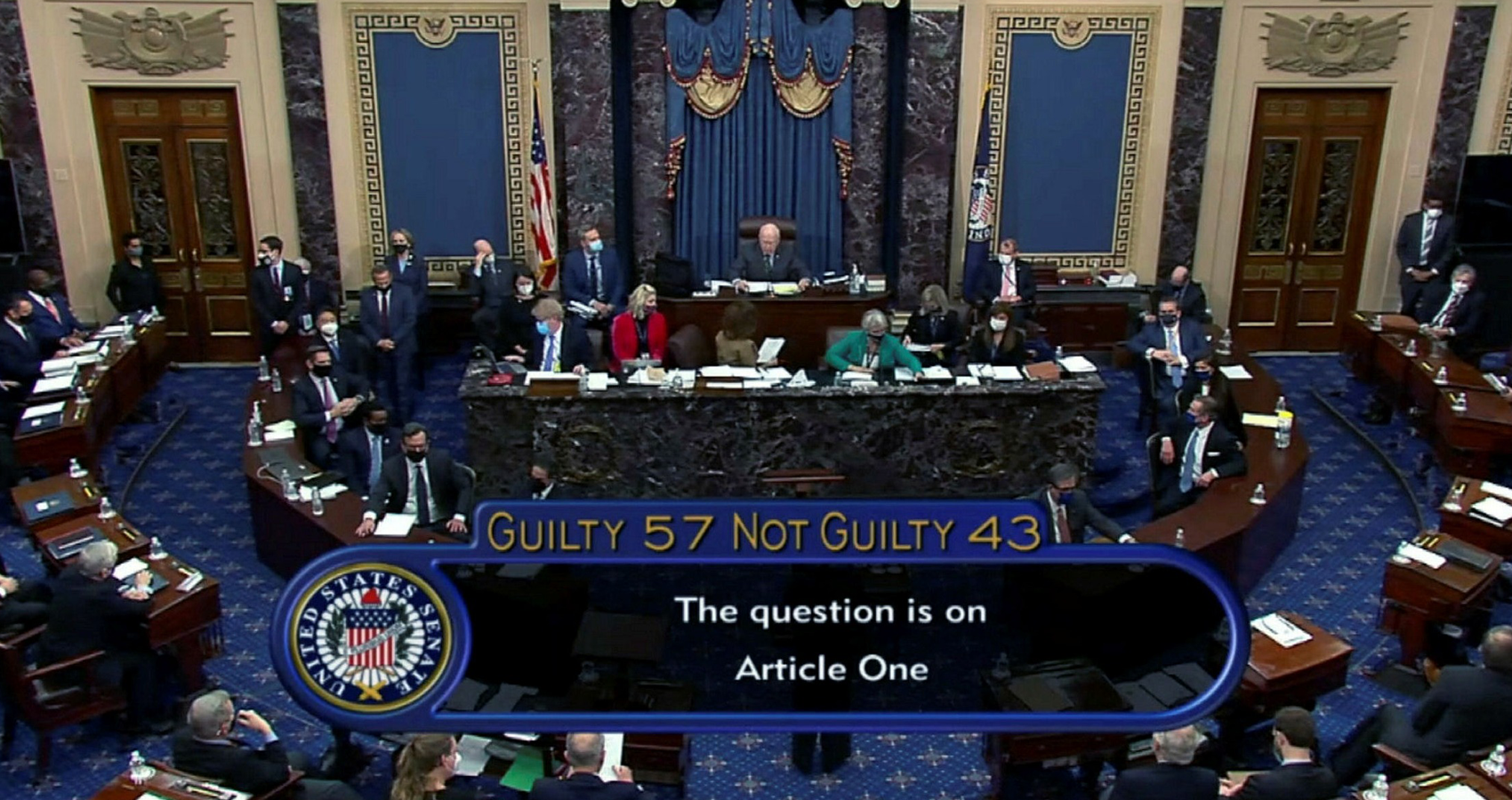 The Senate spent nearly a week hearing arguments and counter arguments, after US House of Representatives overwhelmingly voted to impeach Donald Trump and sent the Article of Impeachment charging the 45th US President of Insurrection, Violence, Falsehood and seeking to overturn the election results of 2020 by sending violent  mobs to attack US officials and elected members of the US Congress Senate on January 6th , when a mob invaded the US Capitol seeking to stop the final certification of Joe Biden’s election victory.

Trump was charged with incitement of insurrection. For three days last week, House managers laid out a devastating case for conviction. Methodically, meticulously they detailed the former president’s effort to undermine and overturn a free and fair election, culminating with his fomenting an attack on Congress that resulted in the deaths of five people, and very nearly more. Mr. Trump spun lies and conspiracy theories to defraud and destabilize his followers. He told them that their votes had been stolen. He made them believe that everyone had betrayed them, from local officials to the media to the Supreme Court. He convinced them that the only way to save their nation was to “fight like hell.” Mr. Trump whipped his loyalists into a rage, summoned them to Washington, pointed them at Congress and then retreated to the safety of the White House to enjoy the show.

Donald Trump went on trial in the Senate, accused of setting the stage for that event, and was acquitted on Saturday, February 13th. All 50 Democrats and seven Republicans voted against Trump, but that fell short of the 67 votes needed to convict him. 43 Republican Senators chose falsehood and stood to support Trump, fearing backlash from Trump and his ardent supporters in the Republican Party.

House impeachment managers wove together horrifying videos, some seen publicly for the first time—along with Trump’s speeches and tweets around the election and its aftermath—to present a timeline of a president who pushed a big lie that the election was rigged, helped assemble and ignite an angry crowd and sent it toward the Capitol, just as Congress was doing its constitutional duty.

Rep. Jamie Raskin of Maryland, the lead impeachment manager, told reporters after the trial that most Republicans believed the managers had proven their case, even if they voted to acquit on constitutional grounds. “We have a clear and convincing majority of members of Congress that the President actually incited violent insurrection against the union and against the Congress,” Raskin said.  “Mitch McConnell clearly feels that Donald Trump remains a huge problem for the Republican Party, even if he has been disgraced in the eyes of the country. That is not my jurisdiction, and I really don’t have anything to say about that. They will have to deal with the political dynamics within their own party.”

If you fail to hold him accountable, it can happen again. This was the heart of the prosecution’s argument in the ongoing impeachment trial of Donald Trump. It is a plea for the senators charged with rendering a verdict not to limit their concerns solely to the events of Jan. 6, when a mob of Trump supporters sacked the U.S. Capitol, but also to act with an eye toward safeguarding the nation’s future. To excuse Mr. Trump’s attack on American democracy would invite more such attempts, by him and by other aspiring autocrats. The stakes could not be higher. A vote for impunity is an act of complicity. It is unfortunate that the country finds itself at this place at this moment, American pitted against American. But there is no more urgent task than reentering the nation’s political life as peaceful and committed to the rule of law.

In the moments after former President Donald Trump was acquitted by the Senate for a second time in a little more than a year, Senate Minority Leader Mitch McConnell rose to speak. In a speech on the Senate floor Saturday, Senate Minority Leader Mitch McConnell condemned Trump’s actions before and during the riot, but he was among the Republicans who voted to acquit on the grounds, disputed by many legal experts, that the Senate doesn’t have the power to try former officials. His message was clear: the former President could not be the future of the Republican Party.

The House managers’ case added much to what we knew of the riot, wrote SE Cupp. “From the bloodcurdling calls from Capitol police, begging for backup as an angry, violent mob breached the Capitol, to the stunning footage of Officer Eugene Goodman diverting Sen. Mitt Romney of Utah away from an imminent threat of danger, to video of Vice President Mike Pence being hurriedly evacuated, and affidavits revealing rioters ‘would have killed Mike Pence if given the chance,’ it is all unspeakably awful and somehow even worse than we knew.”

“Former President Trump’s actions preceding the riot were a disgraceful dereliction of duty,” McConnell said on the floor Saturday. “Anyone who decries his awful behavior is accused of insulting millions of voters. That is an absurd deflection,” McConnell added. “Seventy-four million Americans did not invade the Capitol. Hundreds of rioters did. Seventy-four million Americans did not engineer the campaign of disinformation and rage that provoked it. One person did. Just one. ”

Many G.O.P. senators made clear heading into this trial that — whether out of fear, fealty or both — they still aren’t prepared to cross Mr. Trump and risk alienating his cultlike following. At moments, some were visibly shaken by the evidence being presented, but a handful were so committed to telegraphing their disdain for the process that they couldn’t be bothered to watch the House managers’ presentation. They doodled or played on their phones or simply averted their eyes as the horror unfolded.

This abdication of duty is heartbreaking for the nation. It isn’t just that these senators are putting the interests of a single man ahead of the interests of the nation; it’s also a tacit admission that the only constituents that many Republicans consider worth representing are their most partisan supporters. These lawmakers see themselves less as public servants committed to the common good than as party functionaries serving tribal interests.

Even as McConnell voted that Trump was not guilty Saturday for inciting an insurrection — raising constitutional and specific legal objections — McConnell’s words underscored the challenge for the Republican Party going forward. They are torn between two competing interests: sticking with Trump enough to woo supporters for themselves and erasing Trump’s dangerous final days from the GOP’s legacy.

“Time is going to take care of that, some way or another,” Sen. Chuck Grassley, a Republican from Iowa who voted to acquit, said when asked if Trump should be the future of the party. “But remember in order to be a leader you’ve gotta have followers. So we’re going to find out whoever leads, but everyone is going to be involved, we’re a big tent.”

“I think he is probably not likely to ever be President of the United States again based on what is going on right here right now,” said Sen. Kevin Cramer, a North Dakota Republican who voted to acquit Trump. “I think the impeachment process has been damaging because people have seen repeated images of how awful that night was and how inappropriate his response was. While it does not meet the standard in my view of inciting insurrection, it will have had that damaging effect.”

Sen. Pat Toomey of Pennsylvania, another Republican who voted guilty, argued Saturday that Trump’s reputation has been badly damaged. “It was a bipartisan vote. It was the biggest bipartisan vote there ever was,” said Toomey, who is not running for reelection in 2022. “And a majority of senators believed that he was guilty. Not the two-thirds necessary to actually convict by our constitutional standards, but that is an extremely powerful rebuke. And that doesn’t go away. And the American people are aware of what he did.”

“The then-President knew that the crowd he had summoned was prone to violence,” wrote Doug Jones, a former US senator from Alabama. “He even retweeted some of their posts and amplified their violent and divisive rhetoric. This was a crowd ready to start a revolution in Trump’s name, and he knew it.”  Even though he was acquitted, “this was far from a triumph for Trump,” David Axelrod wrote. “Though he avoided sanction, the trial imposed a more enduring penalty on him by laying bare for the world and history his craven role in orchestrating the seditious mayhem at the Capitol.”

The Democratic House impeachment managers may not have convinced 17 Republicans to convict Trump for inciting an insurrection, but Republican senators were clearly shaken watching videos of members — and Trump’s own vice president — fleeing for safety as Trump did little to quell the rioters.