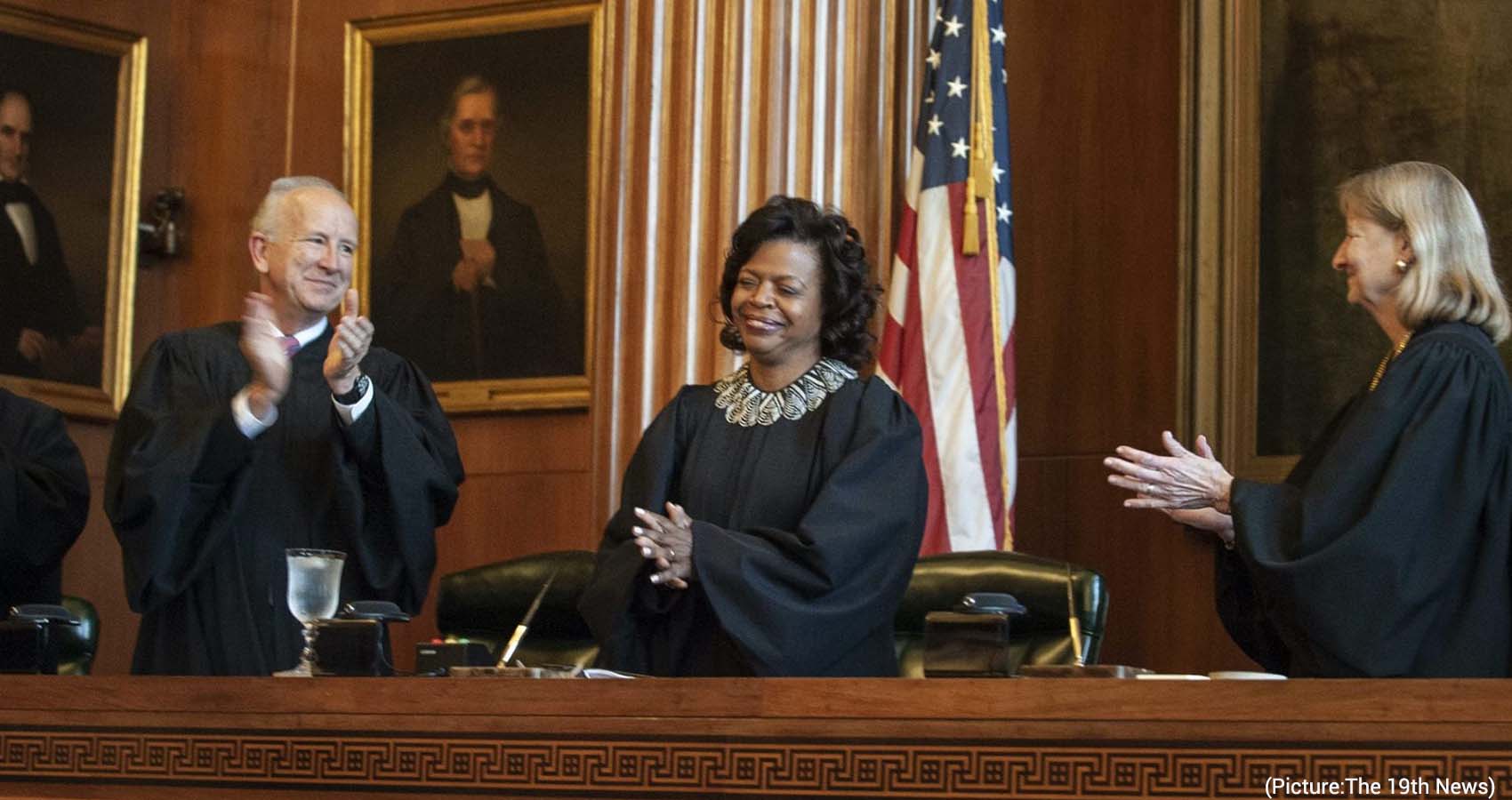 U.S. Supreme Court Justice Stephen G. Breyer, the court’s senior liberal jurist, is reportedly stepping down at the end of the 2021-2022 term. Breyer, 83, who was appointed by former President Bill Clinton in 1994, is the oldest justice on the court, and his retirement would give President Joe Biden a potential opportunity to make good on a campaign promise to nominate a Black woman to fill the seat.

There are several candidates whose names have been circulating as potential nominees. They include Judge Ketanji Brown Jackson, of the D.C. Circuit, who is considered a leading candidate; Justice Leondra Kruger, of the California Supreme Court; and Judge Michelle Childs, of the South Carolina District Court.

Regardless of whom Biden picks to fill the vacancy, the balance of power will remain unchanged, with conservatives holding six seats to the liberals’ three. But the president’s nomination is sure to encounter resistance from Republican leadership in the Senate, who bent over backwards to ensure former President Barack Obama’s nominee, Merrick Garland, did not even receive a hearing to fill the vacancy created by the death of former Justice Antonin Scalia.

Justice Stephen Breyer’s upcoming departure from the Supreme Court hands President Biden the chance to tap a replacement who is expected to bring youth, diversity and a more liberal outlook than the retiring 83-year-old jurist known for his unique brand of judicial modesty and pragmatism.

The seating of Biden’s nominee, who he has said would be the country’s first Black female justice, will not fundamentally shift the balance of the 6-3 conservative majority court. But replacing Breyer with a justice who is ideologically to his left could reshape the three-member liberal minority and alter the court in more subtle ways.

“I think it likely that whoever is appointed will likely be more liberal than Justice Breyer, who often had a decidedly conservative bent,” said Dan Kobil, a law professor at Capital University, who described Breyer overall as “mildly progressive.” 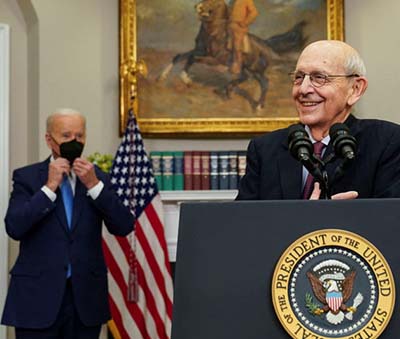 Biden announced Breyer’s retirement Thursday at a White House event, saying he planned to pick a nominee before the end of February.

The president also said he would seek input on his judicial selection from a variety of sources — including senators from both parties, legal academia and Vice President Harris — while standing firm on his 2020 campaign pledge to nominate the first Black woman to serve on the Supreme Court.

“I’ve made no decision except one: The person I will nominate will be someone with extraordinary qualifications, character experience and integrity,” Biden said. “And that person will be the first Black woman ever nominated to the United States Supreme Court. It’s long overdue in my view.”

Among the likely candidates to replace Breyer are Ketanji Brown Jackson, 51, who sits on the U.S. Court of Appeals for the D.C. Circuit; Leondra Kruger, 45, who has served on the California Supreme Court since 2015; and J. Michelle Childs, 55, a federal district court judge in South Carolina whom Biden recently nominated to the D.C. Circuit Court.

Biden’s nominee is expected to round out the court’s liberal wing, which also includes Sonia Sotomayor, 67, and Elena Kagan, 61.

Jonathan Adler, a professor at Case Western Reserve University School of Law, said that compared to Breyer, the next justice is likely to be less deferential to the government when it appears as a party before the Supreme Court.

“Breyer’s replacement is likely to be a little more progressive, especially on criminal justice issues,” Adler said. “Justice Breyer has likely been the most pro-government justice on the court, and so there is likely to be a slight change there.”

But an even more important shift, in Adler’s view, has to do with a change in status among the justices: Breyer’s departure means Sotomayor will become the court’s senior-most liberal justice.

Given the court’s conservative supermajority, liberal justices are often relegated to the dissenting minority on hot-button issues, from disputes over abortion restrictions and religious liberty to voting rights.

Sotomayor, now the court’s most liberal member by a wide margin, has shown herself to be uncowed by the court’s ideological lopsidedness, frequently blasting conservative rulings with fiery dissents.

“The biggest effect of Breyer leaving is that the senior-most liberal justice will now be Sotomayor, instead of Breyer, and that will likely have effects on opinion assignments, which may change the tone of how some issues are handled or discussed,” Adler said.

And since the new justice is likely to find herself in the minority on divisive, politically charged cases, dissent may be a major force in shaping the role.

The late Justice Ruth Bader Ginsburg, a liberal stalwart, once remarked that a forcefully written dissenting opinion can exert pressure on other justices, causing the authors of majority opinions to refine and clarify their argument. In rare cases, a dissenting view has even garnered enough support to supplant the majority opinion.

Dissent can also lay down an important historical marker, Ginsburg said during a 2010 speech. She illustrated the point with a quote from the late Chief Justice Charles Evans Hughes: “A dissent in a court of last resort is an appeal … to the intelligence of a future day, when a later decision may possibly correct the error into which the dissenting judge believes the court to have been betrayed.”

Steven Schwinn, a professor at the University of Illinois Chicago Law School, said the role of frequent dissenter could alleviate some pressure on the Supreme Court’s new arrival.

“This could give a new Justice a unique opportunity to develop her own voice and approach early in her tenure, as she may need to worry less about writing to keep or gain a majority,” he said. He also held open the possibility that a new justice could create “new opportunities for work across the ideological aisle.”

On the other hand, if the next justice proves more progressive than Breyer, it could put pressure on Kagan, now the court’s most moderate liberal, to take on an even greater role as a consensus-seeker.

“I would expect Justice Kagan to try to move into the role of ‘bridge builder’ between the two camps,” said Kobil, “if that is even possible anymore on hot-button issues.”

Another possibility, he said, is that the two sides will move further apart still, producing more acrimony.

“I anticipate the troubling prospect of an increasingly partisan divide among the justices, with [Republican and Democratic appointees] lining up squarely against each other on most ideological issues,” he said. Such a pattern, he said, would mean “Chief Justice Roberts has his work cut out trying to maintain the perception of the court as an institution of integrity rather than simply another instrument in partisan culture wars.”

Nominees need 51 votes in the Senate to be confirmed. Currently, the Senate is split evenly between Republicans and Democrats (including two independents who caucus with the Democrats), but Democrats have a majority because Democratic Vice President Kamala Harris casts the deciding vote in the Senate in the event of a tie.

Breyer’s decision to leave the court comes as the court faces questions of legitimacy given the tactics Republicans deployed to secure three additional conservative  seats in recent years.

“What Mitch McConnell did with Merrick Garland was unprecedented,” Paul says, “a politicization of the confirmation process unlike anything we’ve seen before.” Garland is now serving as U.S. attorney general.

A moderate liberal, Breyer has provided a key check against a majority-conservative court for most of his time on the bench. He has been a reliable defender of administrative agencies, deferring to their expertise; notably, he voted in the majority to legalize gay marriage in 2015, endorsed pro-choice positions on abortion, and wrote a majority opinion striking down an effort to overturn to the Affordable Care Act as recently as last term.