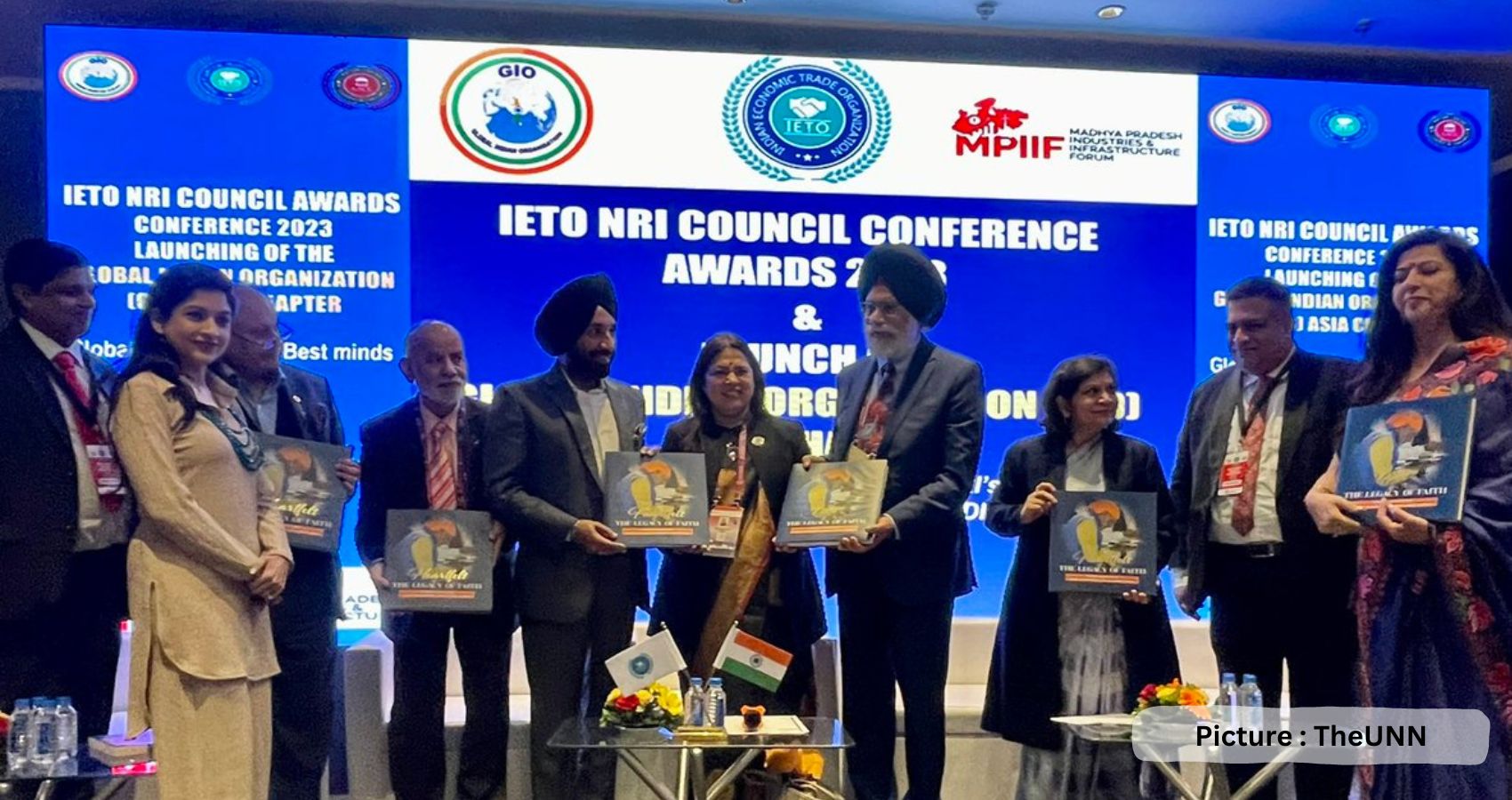 Commemorating the 17th “Pravasi Bharatiya Divas,” which was attended by notable diaspora from all over the world, the Global Organization of People of Indian Origin (GOPIO), Indian Economic Trade Organization (IETO), and India Africa Trade Council (IATC) collaborated to host the NRI Council Conference and Awards on Jan. 10th, 2023.”

Inaugurating the conference, India’s Minister of State for external affairs and culture, Meenakshi Lekhi, who also launched the Global India Organization, Asia Chapter, said: “Happy to inaugurate the NRI Council Conference 2023 & launch the Global Indian Organisation (GIO) Asia Chapter in Indore.
Had a lively interaction with our vibrant Indian diaspora and discussed the numerous initiatives undertaken by the Modi Govt. for our diaspora.”

With a mission to facilitate global economic development with emphasis on India, Global Indian Business Council (GIBC) launched and helped promote the Pravasi Divas 2015 in Gandhi Nagar and Vibrant Gujarat Summit in Gujarat, India by organizing a meaningful half-day economic seminar on November 22, 2012, in metro Atlanta.

GIBC is a network of business and technology leaders across the globe based in USA to promote and facilitate greater cooperation in trade and commerce between India, USA, and the rest of the world following the new vision offered by the pragmatic and dynamic leadership of Prime Minister Narendra Modi of India.

The seminar was well attended by several distinguished speakers, processionals, corporate executives, and leaders of governments, chambers of commerce and academics.

The program started with a cocktail/social hour, which gave the opportunity to the conference attendees to network with each other and explore the opportunities for a successful Indo-USA trade and commerce partnership.

In welcoming address, Dhiru Shah, President-elect of GIBC, President-Suraj International, Inc., Alumnus of London School of Economics and Harvard Business School with 40 plus years of international management and business experience, dwelt upon the need to have an organization like GIBC to promote and facilitate bilateral trade, commerce and investment between all countries particularly at a time when the global economic situation is facing severe recessionary trends.  Shah pointed out that both European Union andJapanare already facing recession andChinais slowing down. He further stated that while theUSeconomy is stable, it is very important that massive investments inIndiafrom overseas can help stimulate further the economy ofIndia. For this effort, GIBC (which strives to help) can become a major player in facilitating investment, trade and business inIndia.

Dr. Mahesh Mehta-President of GIBC, an eminent scientist and research scholar in Membrane technology, explained the basic mission and objectives of GIBC. Dr. Mehta stated that the election of 2014 has for the first time brought a party to power with a clear majority which in turn has elected the most dynamic, visionary, incorruptible and pragmatic leader, Narendra Modi as Prime Minister of India.

He felt confident that the time has come for India to become an economic powerhouse under the leadership of Modi and his hard working team to lead India to its new zenith.  GIBC with it networking abilities with the Indian government and the state governments,USAand the rest of the world will be able to provide its (GIBC) services fromUSAand the rest of the world to set up businesses and industries inIndia.

Hon. Consul R. Srinvasan of the Indian Consulate-Atlanta conveyed his best wishes for the success of GIBC. He explained the role of theAtlantaconsulate in furthering the economic development ofIndiaby offering different services to facilitate investment inIndia. Consul Srinivasan informed that theAtlantaconsulate serves eightUSstates with about 300,000 NRIs and PIOs by offering Visa and other facilities. Currently he, at the Consulate, also deals with economic, trade and commerce wing to help US and NRIs businesses and companies by providing information relating to the Indian economy and various Indian government economic entities.

As a keynote speaker, Hon. Kwanza Hall, Council member of city ofAtlanta, felt that there was a big need to invest in small and medium scale industries and business inGeorgia, which would generate massive employment for the poor African American people. Hon. Hall wanted that theAtlantaCitywould welcome investments inAtlantafromIndiaand Indian diaspora inAmericaon a reciprocal basis

Hon. Yasukata Fukahori,Deputy ConsulGeneral,JapanAtlantaConsulate talked about the close economic relationshipJapanhas withIndia. He stated that the recent meeting of Prime Ministers of India andJapanhas further strengthened the economic ties between the two countries. He praised the efforts made by GIBC in helping facilitate the trade and commerce between Indian and other countries. Hon. Fukahori stated thatJapanhas a very large investment in GA even though the number of the Japanese living in GA is very small compared to Indian Americans. There were some hilarious moments when Hon. Fukahori talked about reservations of Japanese speakers to speak beyond the protocol and how the Indian speakers like to continue speaking. He narrated one experience in which the Japanese Speaker in India spoke for 5 minutes but the interpreter in India explained for 30 minutes explaining what the Japanese spoke in 5 minutes.

Andjela Kessler, President-Incentive Travel & meetings, talking about the Indo-Global tourism, informed the audience that her company has been successful in developing tourism in India and particularly in Gujarat. She spoke about the success of the short Gujarat tourism advertisement videos/films by engaging the Bollywood film star like Amitabh Bachchan and her good fortune to interact with then CM. Narendra Modi of Gujarat She pointed out about the great success story of tourist industry in Thailand and felt that India can also become a major tourist nation in the world if the Indian government and businesses developed the basic infrastructures like good hotels, roads, and reliable transportation. At hisMadisonSquareGardenrally in NY on September 27, Prime Minister Modi had made a direct pitch to NRIs to woo tourism for the progress ofIndia.

Raj Anand, CEO of Southern States LLC and an alumni of IIT India, narrated how successful his company has been able to develop a close and mutually beneficial business relationship with a few Indian companies like Crompton Greaves. He stated that there is a large pool of qualified engineers and technically trained workers inIndiawho will help the country to develop economically fast with the help of the Indian government, foreign investment and established Indian business corporations. He hinted that for a success of operations inIndiaby overseas companies, it is desired that they have at least some control in the day-to-day operations inIndia. He went on to elaborate the success story of the Southern States LLC which has introduced ground breaking products like the Load and Line Switchers.

Charles Wood of ETech Global Services,Dallas,TXspoke about the US-India Collaborative success in the field of IT industry. His company has set up two offices in Gujarat employing about 500 IT executives who are responsible for software development for their global operations includingUSA. Their first office in Gandhinagar was inaugurated by the Indian Prime Minister, Narendra Modi (then Chief Minister ofGujarat). ITech CEO, Matt Raco conveyed the message that his company will join hands with GIBC in facilitating investment inIndiaand congratulated its President Dr. Mahesh Mehta for this visionary and timely endeavor.

On the topic of Medical Tourism inIndia, Dr. Raghunath Katragadda, Asst. Prof. of Medicine, Div. of Cardiology,EmoryHeart & VascularCenter, talked about his success story of setting up a top class Hospital chain inHyderabad,Indiato cater to the medical tourism fromUSAand other countries. He stated that in order to build a successful medical tourist industry inIndia, it is necessary to have top class hospitals, reliable nursing, follow up care, trained doctors and surgeons with affordable pricing. Currently, there are only a few hospitals inIndia, which can treat patients from the western world. He also pointed out that there are other countries likeSingapore,Thailandwho are also competing withIndiato attract medical tourists in their countries.

Kanchan Banerjee, VP, GIBC, CEO- Ipremm, Inc. and Editor in Chief of the New Global Indian Magazine, made a power point presentation on Vibrant Gujarat 2015 and urged audience to join the GIBC delegation to Vibrant Gujarat program scheduled to be held on Jan. 9-11, 2015 which will give them the opportunity to meet industrialists, the Chief Minister and top government bureaucrats of the Gujarat government for signing MOUs in investing in Gujarat. He added, never before has the business environment so friendly inGujarat. “So, take advantage of it!”

Subash Razdan, VP-GIBC, an active participant and recipient of PBD Samman Award 2013 and Director, Georgia Chamber of Commerce, gave a brief overview of the Pravasi Bharatiya Divas (PBD-People of Indian origin), the opportunities to invest in India and encouraged the audience to attend the 2015 event to be held in Gandhi Nagar, Gujarat on Jan. 7-9, 2015, especially so when it is followed by the Vibrant Gujarat Summit (VGS). He underscored the importance of this year’s PBD as it will celebrate the centennial celebrations of return of the father of the nation, Mahatma Gandhi from S. Africa toIndiain 1915 and for further details, one could get in touch with the Consulate General of India (CGI) and/or members of GIBC.

Ashwin Patel, VP- GIBC, Chairman-Apsilon Hotels LLC, Supreme Hospitality Supply LLC and Alpha Renewable Energy LLC, offered the vote of thanks to the distinguished dignitaries, invited guests, media persons, officials and volunteers and the hospitality of Staybridge Suites staff. He thanked Dr. Narayanan Komerath, Prof. of Aerospace Eng. at GA tech for his design of the GIBC website. He thanked Madhu Tata of Swapna Indian Cuisine for catering an exotic dinner and Sanjay Pandya of Davis Printing. The event saw many prominent and other dignitaries present such as Hon. Greg Pridgeon, former Council Member of Atlanta and former Chief of Staff of City of Atlanta under Mayor Shirley Franklin and key proponent of the Atlanta-Ahmedabad Sister City relationship; Hon. Eric De Groot of Sandy Springs International Economic Affairs and President of the Holland Chamber of Commerce; Wayne Lazarus of the prominent law firm Stokes, Lazarus and Carmichael who has drafted articles of Incorporation of many Asian (also Indian) American non-profit organizations,  Jitu Patel, Chair of the Atlanta-Ahmedabad Sister City Exchange Committee (AASCE) et al. TheSisterCityproposal of twining of Atlanta-Ahmedabad was approved by the public hearing of over 300 attendees in favor of Ahmedabad by near unanimity, but had to be shelved due to scale back and economic recession in Georgia and the rest ofUSAunder mayor Shirley Franklin. Fortunately, Mayor Kaseem Reed is looking at it favorably now with special connection of Gandhi (Ahmedabad) and King (Atlanta).