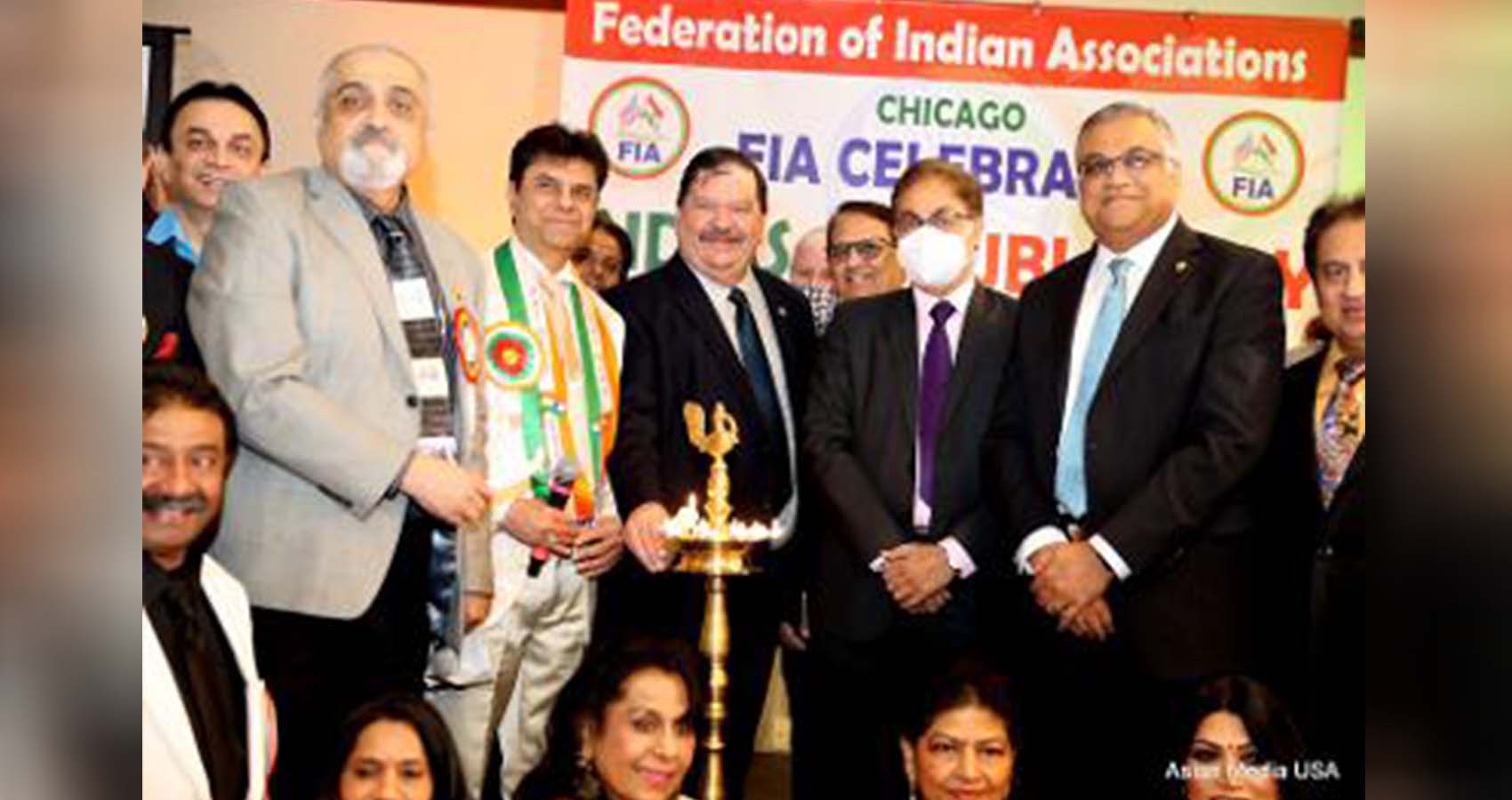 The event was promptly started at 7PM (CT) by the emcees Richa Chand & Vinita Gulabani, starting with the beautiful rendition of the American National Anthem by Nitya Rao and the Indian National Anthem by Ananya Ghosh. Sunil Shah Chairman and Founder of the FIA welcomed the people at the event and outlined the yeoman services provided by the FIA in the recent past during and after the pandemic. He briefly welcomed and introduced the new team under the new president Hitesh Gandhi. He spoke of the plans for the new year and mentioned that to commemorate Azadi Ka Amrit Mahotsav FIA Chicago has intent to start their own community center to facilitate better ongoing services to community people. Shah in his closing remarks, spoke,” Freedom in our Heart, Pride in our Soul, Purity in our Blood, Let us Salute our Motherland India!!” 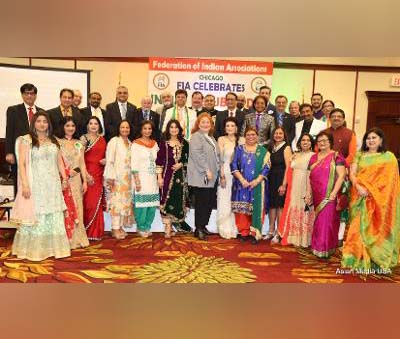 Congressman Raja Krishnamoorthi in his inimitable style addressed the cheering audience and expressed great joy and best wishes to Team FIA and the entire Indian community for the outstanding contributions, over more than a decade now.

Immediate past president Dr. Kamal Patel was welcomed on the stage. He outlined the achievements of the FIA during his tenure last year as the outgoing president of the FIA and welcomed the new team led by Hitesh Gandhi. Onkar Sanga in his brief address congratulated the FIA for their achievements in the last year and wished that the new team would take the FIA to greater heights.

Hitesh Gandhi the new president for the year 2022 outlined his plan for the new year. He listed out the activities and events that would take place during the year and thanked the FIA board for the trust that was shown in his ability to lead the FIA to greater heights in the new year.

The FIA Board was introduced and immediately followed by the traditional lamp lighting ceremony. The patriotic song “Ae Mere Watan Ke Logo” by Jitendra Balsara reminded everyone of the beautiful motherland India. The audience cheered as they watched an energetic dance performance by the students of SR Dance Academy, choreographed by Elizar Rodriguez.

The Chief Guest Consul General Amit Kumar in his address, wished everyone a Happy Republic Day and spoke about the enormous progress India has made in the last several years and mentioned that India is now positioned to succeed even more as we approach 75 years of India’s Independence, and getting ready for Azadi Ka Amrit Mahotsav, an initiative by Govt, of India. He spoke about the covid pandemic, and despite its challenges how India successfully carried on its vaccination drives and the role of technology and innovation.

On a somber note, the FIA paid tributes to Mir Ali who passed away recently by facilitating his wife with a honorary plaque for his dedicated service to FIA and a Scholarship grant of $1000 to his daughter Nida Ali.

In total 3 Grant Scholarships were provided to students. These were announced by FIA Chairman Sunil Shah and given away by Consul General of India, Amit Kumar, Deepak Kant Vyas CEO Redberri, Anil Loomba (virtual) Hitesh and Kim Bhatt, the Bhatt Foundation, Deepak Kant Vyas CEO Redberri. The other two students who were the recipient of scholarship names are Ria Sharma from Stevenson Highschool & Jaisnav Rajesh from Waubonsie Valley High School. 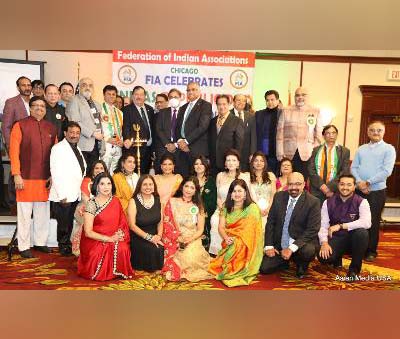 Hitesh Bhatt, Founder & Kim Bhatt, President of the Bhatt Foundation were honored with a Plaque and were acknowledged for their sponsorship support to FIA. In their speech, the Bhatt’s, shared their message of “Improving Global HealthCare and Education through Innovation”. They touched upon their philanthropic work in USA / India / Honduras / Africa and expressed their interest in supporting FIA’s initiatives as well.