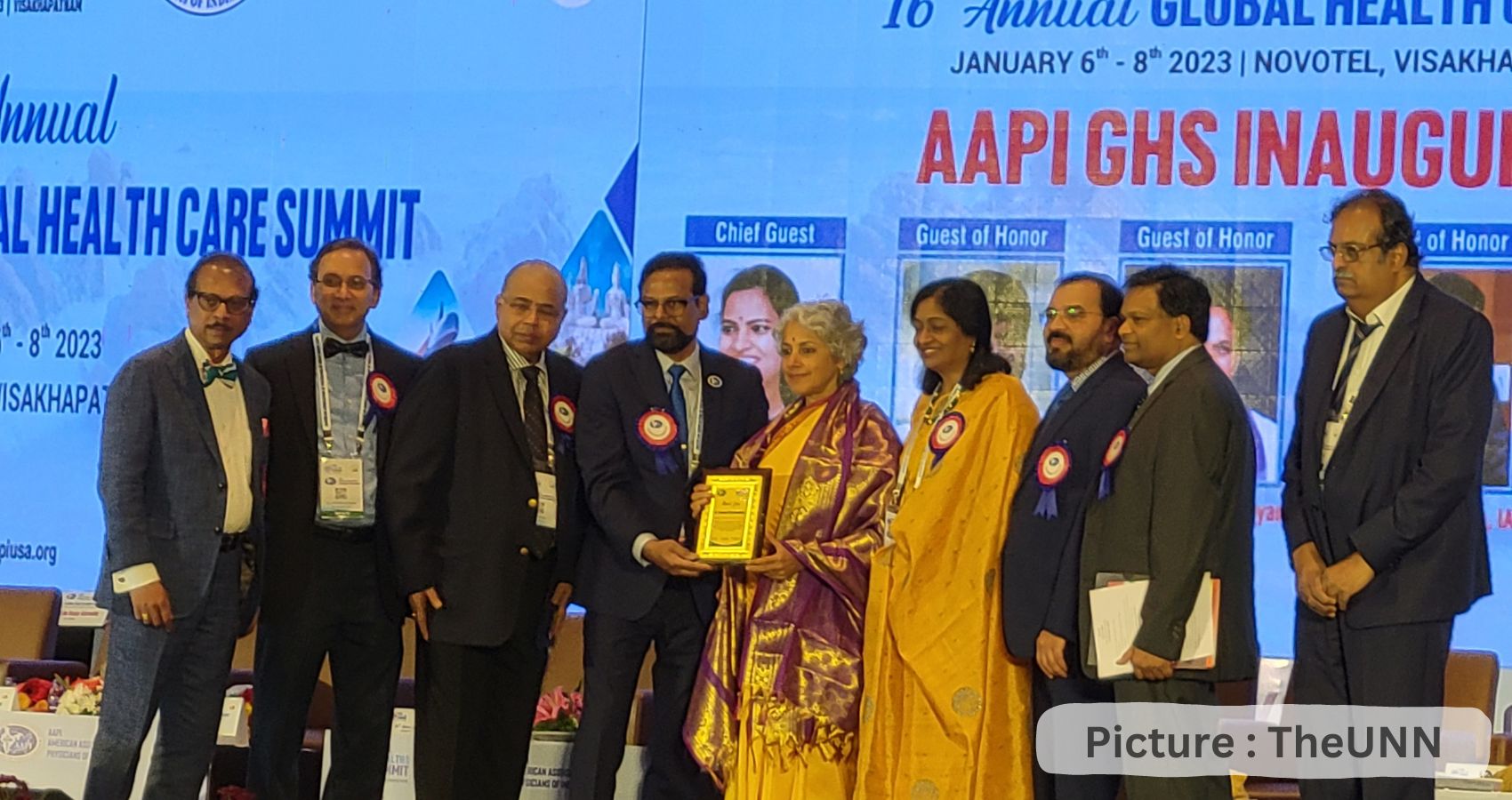 The event jointly organized by Prof P. Brahmayya Sastry Memorial Oration Committee and Andhra Medical College, Visakhapatnam was chaired by Dr. Abhijat Sheth and Dr. Sridhar Chilimuri. While introducing the awardee, Dr. T. Ravi Raju, Chair of the Oration Committee said, Dr. Soumya Swaminathan was most recently WHO’s Deputy Director-General for Programs. A pediatrician from India and a globally recognized researcher on tuberculosis and HIV, she brings with her 30 years of experience in clinical care and research and has worked throughout her career to translate research into impactful programs.

Dr. Swaminathan was Secretary to the Government of India for Health Research and Director General of the Indian Council of Medical Research from 2015 to 2017. In that position, she focused on bringing science and evidence into health policy making, building research capacity in Indian medical schools and forging south-south partnerships in health sciences. From 2009 to 2011, she also served as Coordinator of the UNICEF/UNDP/World Bank/WHO Special Program for Research and Training in Tropical Diseases in Geneva.

In her eloquent address, Dr. Swaminathan said, “The coronavirus has evolved significantly since it was first traced in late 2019. From being a considerably deadly virus, it has now become less fatal – thanks to the vaccination initiatives across the world.” She asserted that death rates are much higher in unvaccinated compared to vaccinated and boosted individuals.

Dr. Swaminathan, while describing the main lesson from the pandemic, stated that “climate change, and it all boils down to what humans have done to the environment. Our lives are intertwined with the health of the environment,” she added.

The vulnerable suffer a lot, and it’s important to focus on equity and help those who are left behind, she said. She also stressed on the importance of a public health approach, having good data, and research.

We are recovering quickly because of vaccines, she said, pointing out that over 13 billion people worldwide have taken the vaccine and 20 million lives have been saved due to it. The majority of deaths in the US were because of no vaccination, she added.

Dr Swaminathan further explained that vaccines are developed with high efficacy and safety. The virus is trying to evolve, and each time mutations have allowed the virus to evade antibodies, she said, adding that, “there are people who have not taken the vaccine and haven’t fallen sick, but that’s a matter of chance.

COVID-19 has also disrupted the education system. It has also adversely affected access to nutritious food as a huge number of children depend on school meals, she said and urged everyone to help children overcome and regain the loss they had to endure due to the covid.

Stating that the global pandemic is marching on, the world renowned scientist said, “Of the lessons I have learned since the pandemic began, the most important one is the significance of investing in public health and primary healthcare. Countries that invested in primary healthcare over the past decade or two are reaping the benefits now. Another lesson is the positive role of science and scientists. The global collaboration between scientists to take forward advances in knowledge so that science is continuously informing our response to the pandemic has been encouraging.”

For the future, Dr. Swaminathan stressed, “We need to invest in strong institutional mechanisms and capacities in our regulatory bodies, research centers and public health institutions. We have seen so much fear, stigma and discrimination circulated on social media. This must be countered by health literacy.”

Dr. Ravi Kolli, president of AAPI praised the accomplishments and contributions of Dr. Swaminathan and numerous healthcare leaders of Indian origin who have contributed immensely to the many ways, the world has been able to overcome the once in a century, deadly pandemic that has devastated the entire humanity. Expressing hope for the future, he said, “The world looks towards us with hope for leadership and consolidated action to prevent and secure health and well being of everyone committed to our care.”